The G-20 summit, slated to take place in Hamburg, Germany, on July 7, will generate many headlines but little substance. The press will portray this meeting as a showdown between U.S. President Donald Trump and German Chancellor Angela Merkel, as if Barack Obama and Merkel did not have their differences, as if the only sticking point between two countries could be the esteem in which their leaders held each other.

Germany and the United States have become hostile toward each other not because of the personalities of their leaders but because they have fundamental differences, including their positions on NATO. The U.S. wants NATO to be a military alliance with all members having a significant military capability. Germany wants NATO to be primarily a political organization with a secondary military role.

Before attending the G-20 meeting in Germany, Trump will visit Poland for what has been called the Three Seas summit, so named because it will include countries bordering the Baltic, Black and Adriatic seas. The U.S. and Poland have shared interests, particularly when it comes to Russia. But while their approach to Moscow brought these two countries closer together, it also pushed them further away from Germany.

The fundamental differences between the U.S. and Germany are based on divergent geopolitical views. The United States remains the only global military power. At the moment, it is engaged in military operations in the Middle East, in a tense confrontation in North Korea, in military gestures in the South China Sea and in a military deployment in Eastern Europe. These operations can change since the U.S., driven by global events, is a reactive power. But there is also a grand strategy to U.S. operations overseas. The major threat to the U.S. is the consolidation of Europe and Asia under a single entity, an entity whose total power would overmatch U.S. power. The U.S. interest in all these regions, therefore, has to be seen in a global context. 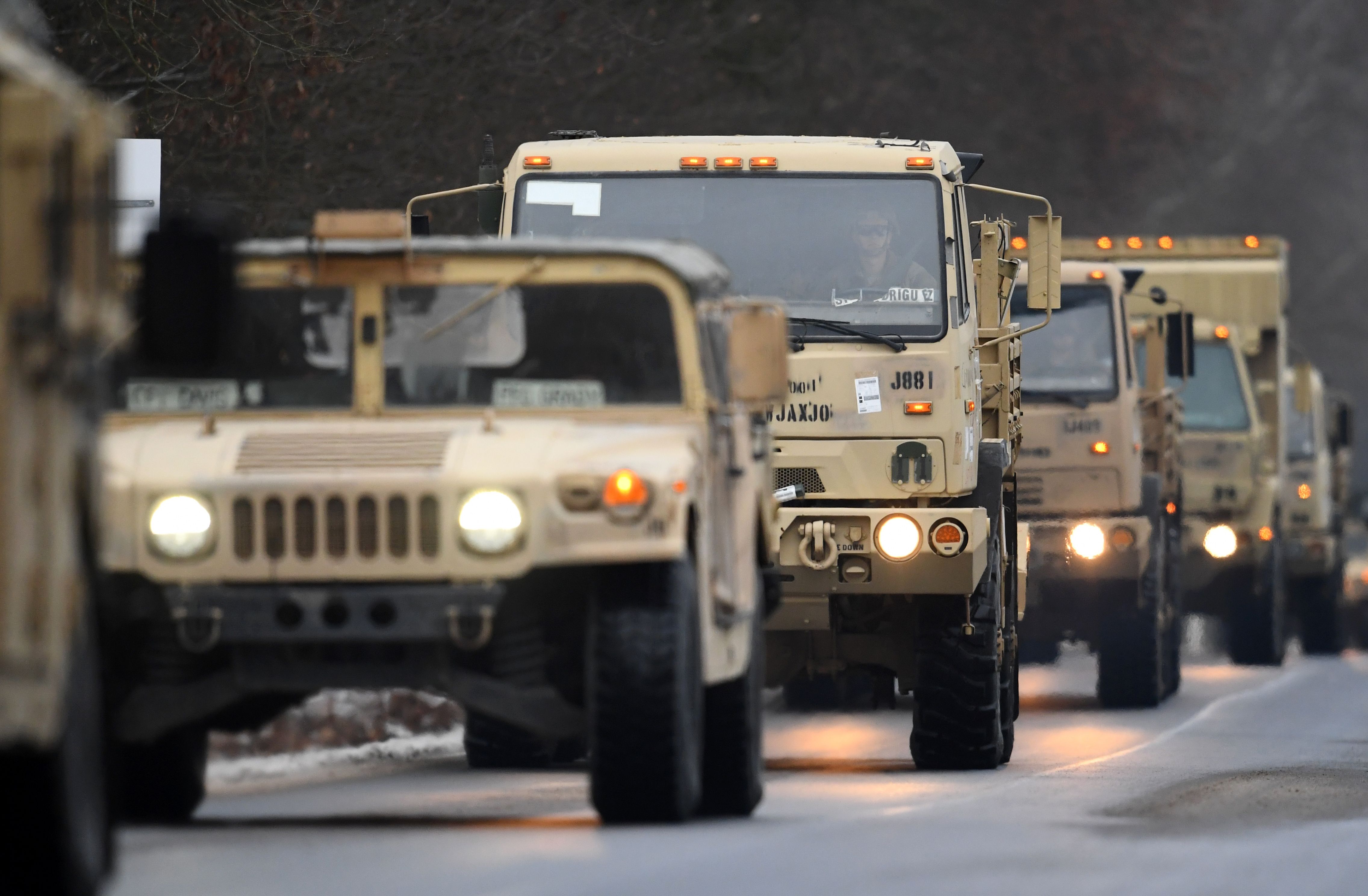 U.S. military vehicles make their way on an army training camp near Brueck, northeastern Germany, on January 11, 2017. About 40 soldiers spent the night at the camp before continuing their way to Poland as part of the Operation Atlantic Resolve in response to Russia’s actions in Ukraine. RALF HIRSCHBERGER/AFP/Getty Images

Germany is a local power. It has built its regional influence on economic rather than military power. It depends on the European Union, which gives Germany a free trade zone for its exports, control over the pricing of the euro through its influence in the European Central Bank, and a dominant position in Brussels. Given the architecture of German power, Berlin has little desire to become entangled in American global actions. It also sees conflict in general as a threat to its economic position.

Germany and the U.S. therefore see Russia through these different lenses. For the U.S., it is one of a series of global confrontations, and military power is a central feature of any U.S. response. For Germany, the Russian confrontation is a regional conflict, and any possibility that it could escalate to a military confrontation poses a strategic threat to German interests.

The United States and Poland, on the other hand, have similar interests. Poland is a regional power. Its historical interest has been to achieve and maintain its sovereignty in the face of European empires – Russian, Austro-Hungarian and German. Since the 17th century, it has achieved this only intermittently. Between the end of World War I and the beginning of World War II, it was sovereign for roughly two decades. It lost its sovereignty to Germany in 1939, and regained it in 1989 after the Soviet occupation ended.

Poland’s sovereignty has since been guaranteed by the European Union and Germany. When Russia was reeling from the collapse of the Soviet Union, it appeared that Poland had secured its sovereignty. But Russia inevitably emerged from its collapse and reasserted itself in the late 2000s. Poland and Germany, meanwhile, have parted ways.

And they did so for three reason. First, Poland elected a government Germany and the European Union disapproved of. Since national self-determination demands respect for electoral outcomes, the Polish government saw the EU and Germany’s disapproval as a challenge to the foundation of liberal democracy. The EU and Germany, meanwhile, saw the outcome of the election as a deviation from European values. It was a question of where sovereignty lay, and for Poland this was not a minor issue.

Second, the economic performance of the EU and Poland diverged. Poland had not joined the eurozone, and that plus other factors meant that the EU could not guarantee Poland’s economic security.

Finally, it was unclear to Poland what Germany’s relationship with Russia would be. As Europe fractured and weakened, Germany needed other markets and relationships. One obvious option was Russia. For the most part, Germany and Russia had been hostile since German unification, but there had been periods of entente. As Russia emerged as a perceived threat to Europe and as tensions between Germany and the United States developed, Poland had to consider that its worst nightmare – an entente between Germany and Russia – could take shape.

Poland needed a security guarantor. The United States obliged. The U.S. needed a location from which to station its troops to contain Russia (although this deployment was formally a NATO undertaking, it was actually under American control). Poland obliged.

The American strategy to contain Russia was not just about Poland; it stretched from the Baltics to Romania. Nor was it only American. Other NATO countries, including Germany, shifted some limited forces throughout the region. The force the United States deployed wasn’t sufficient to block a major Russian incursion, but it was a tripwire, as Berlin had been in the Cold War. It was understood that American casualties from a Russian foray would trigger both a massive U.S. political response and a massive U.S. intervention. Unlike other countries, the U.S. was capable of supplying significant reinforcement, however small the initial deployment might be.

This increased German hostility to the United States and to Poland. Germany had agreed to impose sanctions on Russia, but since Berlin did not want a significant confrontation with Russia, let alone a war, they were fairly inconsequential. Poland and the United States seemed far more prepared for conflict than Germany could afford to be. This was the foundation of the U.S.-Polish relationship. The Americans and the Poles both wanted an active containment of Russia. Germany wanted an accommodation. German hostility toward the U.S. and Poland was rooted in this, as was U.S. and Polish distrust of Germany.

Russia is in no position to wage war. Its forces are far to the east, beyond the Ukrainian border in the south. In the north, it can move only on a narrow front. But Russia also failed to account for how economically calamitous the fall of the price of oil would be. Wars can be waged in bad economic conditions, but it would be difficult to build the massive force Russia would need for this war.

A direct challenge to the U.S.-Baltic-Polish-Romanian bloc is impossible. Russia has reverted to a global campaign of minor disruption, as it did in the 1980s. That campaign ended with the collapse of the Soviet Union, and the idea that the core geopolitical balance today can be shifted by stealing emails has little historical support. It is a useful tool, but it is no substitute for economic and military power. What’s more, the allegations of Russian interference in the U.S. election actually made it more difficult for Trump to follow the German line and accommodate Russia. I doubt that President Vladimir Putin had that in mind, if indeed he did launch a destabilization campaign.

In the meantime, the notion of an alliance between two seas, the Baltic and the Black, is now being extended to a third sea – the Adriatic. Poland is taking the lead in incorporating the Balkans into the strategic belt. That may be too ambitious for now, but this new alliance structure could strengthen Poland and Romania and increase pressure on Russia and Germany.

At the G-20, the media will undoubtedly focus on the personal relationships between leaders, as if relations that have been intertwined for generations could be extinguished by a brush between one leader and another. Leaders come and go, but nations endure for a long time. And their behaviors tend to follow patterns: Russia wants to build a wall against invasion as far west as possible; Germany wants to maintain its economic balance in the face of war or peace; Poland lives in dread of both countries; and the U.S. weaves Europe into its web of global relations. And all this is more important than who likes whom.

A New Command for the Same War