Following U.S. President Donald Trump’s visit to Europe, German Chancellor Angela Merkel said Europe could no longer rely on others, by which she clearly meant that Europe could no longer rely on the United States. The statement undoubtedly arose in part from her personal friction with Trump. Part of it had to do with politics: Trump is unpopular in Germany, and the German public, particularly the left, has had doubts about the German-American relationship. The country has federal elections in September, and Merkel is under pressure. Her statement generated support from segments of the population that don’t normally support her. But underneath personality and politics, there is a geopolitical reality that has been in place since 1991 and is now emerging fully into view. This reality is that Europe is fractured and, as a whole, its interests have diverged from those of the United States.

Beneath his unusual demeanor during the trip, Trump was representing a view – a rational view – that is increasingly common in the United States. This view holds that NATO was created as a coalition of countries with identical interests: preventing the Soviet Union from invading and occupying Western Europe. NATO was successful because its purpose was clear, there was a deep consensus, and although the U.S. carried much of the burden of defense, other European countries, particularly Germany, carried a share of that burden proportionate to their ability – and would bear the brunt of a Soviet invasion. The alliance made sense.

The alliance persisted after the fall of the Soviet Union and expanded to include the countries that had been Soviet satellites. The political purpose of expansion – helping to integrate new countries into the West – was understandable, but without an obvious adversary, NATO as a primarily military alliance no longer made sense. The laser precision of the bloc’s Cold War mission was replaced by a vague mission and an uncertain vision.

In the meantime, 9/11 launched the United States into a series of wars in the Middle East. Whether they were wise is immaterial at this point; they were the primary military focus of the United States. But though the Americans’ invocation of Article 5 (the principle of collective defense) committed NATO to the war in Afghanistan, how much individual members contributed was up to them. And in Iraq, where Article 5 was not invoked, many NATO members chose not to participate at all. Germany played no part in Iraq, and in Afghanistan, it deployed a relatively small force with tight restrictions on combat operations.

The Americans understood the technicalities. They also understood that NATO was no longer very relevant to the problems the United States was facing. Bilateral relations took precedent over relations with NATO. The U.S. moved closer to the United Kingdom and smaller countries, particularly in Eastern Europe, that were prepared to commit what they could to the wars in the Middle East. It became increasingly difficult for the Americans to think of Europe as a whole: It didn’t behave as a whole, and the Euro-American alliance didn’t extend beyond NATO’s mission – a mission that appeared to have expired.

The mission was somewhat revived by the Russo-Georgian war in 2008, and even more in 2014 with the uprising in Ukraine. The Russians appeared to be growing more aggressive. However unlikely a Russian invasion was, NATO was committed by treaty to defend the Baltics, Poland, Slovakia, Hungary, Romania and Bulgaria. It had to have forces on hand to deter or repel Russian action. 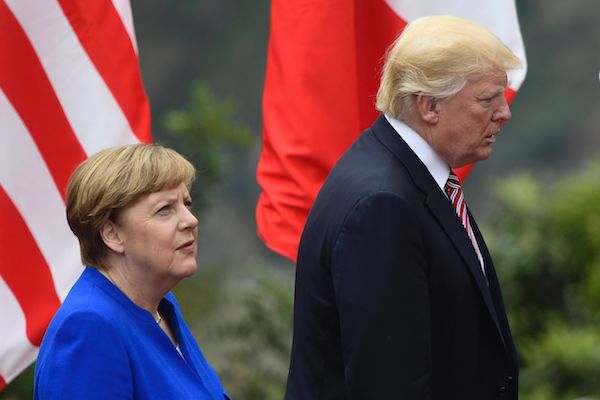 U.S. President Donald Trump (R) and German Chancellor Angela Merkel arrive for a photo during the Summit of the Heads of State and of Government of the G-7, the group of most industrialized economies, plus the European Union, on May 26, 2017, at the ancient Greek theater in Taormina, Sicily. MIGUEL MEDINA/AFP/Getty Images

The problem was that NATO couldn’t deploy enough force for the mission – the mission for which it was founded. Even the wealthiest members, like Germany, lacked a force that could protect Europe’s eastern frontier. This left the United States in a position where, if NATO were called on to defend a member, it would be the prime mover, as it had been since the alliance’s founding. Many in Europe argued that the danger was low, but those nearer to the front line – the Balts, the Poles and the Romanians – didn’t share their confidence and had a reasonable expectation for NATO to function as designed.

To this point, the Americans were disappointed but understood that many European NATO members provided the force they wanted to provide to the wars they chose. But 2014 raised the specter of a European war, and what the U.S. saw was many of its NATO allies, particularly Germany, offering ample advice and playing a role in diplomacy but lacking, by choice, the force to carry out their NATO obligation relative to the size of their economies.

It was then that the divide between the U.S. and NATO became a domestic political problem in the United States. The foreign policy technocrats in Washington accepted as a given that the European commitment to NATO would not evolve to reflect the economic equality between the continents. The rising nationalist segment of the American populace opposed fixed institutionalized relationships, particularly those that did little to meet the needs of the U.S. and that involved unequal burden sharing.

It was this group that Trump represented while he was in Brussels. Merkel’s response to him – essentially saying Europe should take care of itself – would shock the foreign policy technocrats, but the nationalists regarded it as simply the logical conclusion of Germany’s behavior. They welcome Europe’s commitment to self-reliance, and they will continue their military relationship with the United Kingdom, Eastern Europe and other countries of interest. If the Germans want to abandon NATO, the nationalists are pleased to see it happen.

Lessons of the Past

Germany’s view is that the United States is carelessly threatening the global balance and, far more important, the European balance. Germany went through two catastrophic wars in the past century, was divided in two with both halves occupied (albeit one half more benignly by the United States), and faced the possibility of being the battlefield for a disastrous war. Germany’s primary strategic interest is avoiding a repeat of the past century. In looking at the foundations of that century, it was Germany’s excessive reliance on military force that led it into wars it couldn’t win.

The NATO of the Cold War was something the Germans had to live with to recover from the material and moral catastrophe of World War II. But 1991 opened a new era for Germany in which it wished to avoid being drawn into a conflict that its geography dictated would be disastrous. Germany exists on the North European Plain, a difficult area to defend except at the river lines that run north-south. Whenever the Germans moved to the west or east, they discovered short-term victories, but in the long term they were ground into the dust, constantly in retreat until their collapse. Germany experienced this most emphatically in Russia.

It has no intention of being drawn into such a conflict again, and it does not see Russia as a strategic threat. In Germany’s view, the conflict in Ukraine could not spread beyond Ukraine because Russia’s military power is limited, and Russia doesn’t want a war anyway. Germany intervened diplomatically in Ukraine in 2014, but the Germans believed a new attempt at containment from the Baltics to Romania would not deter war and could even increase its likelihood by encouraging Russia to respond.

For Germany, a strategy of containment requiring the pre-emptive deployment of substantial forces would drain its economy and achieve nothing. Moreover, if the United States and a coalition of the willing decided on a containment policy outside the framework of NATO, Germany, at the rear of the line, would inevitably be drawn in. For Berlin, the measure of commitment to European security is not the willingness to deploy military force but the maintenance of a full appreciation of the balance of forces. In its view, the U.S. and Europe are not rationally evaluating Russian power, and it is Germany’s responsibility to act as a brake on the United States.

Behind this is another reality. Germany is a massive exporter and needs the EU for a free market for sales, a common currency that benefits it, and a system of regulations that protects its industry. Above all else, it must protect the European Union. The EU is already under terrific stress, with Brexit, political tensions between Brussels and Poland and Hungary, and the emergence of a general anti-EU faction. Marine Le Pen’s defeat in the French elections has not ended that problem.

Increased military tension that involves Eastern Europe but is looked at skeptically by countries farther west opens the door to another dimension of European fragmentation. U.S. deployments in Eastern Europe have the potential to increase the centrifugal forces that are already edging toward being out of control. Demanding increased spending from NATO at a time of economic stagnation may seem reasonable to the Americans, but it underestimates Europe’s fragility while simultaneously drawing Eastern Europe into its orbit and further fragmenting the EU.

From Germany’s point of view, the U.S. has been too powerful for Germany to influence, and until now Germany had been too weak to resist. Germany sees the U.S. wars in the Middle East as examples of America’s excessive power. The U.S. has for 15 years waged a war, even in the face of failure, that towers over anything the Europeans can field for any length of time.

Germany is a weak and scarred country living in a difficult place. The Americans tend to see war as a viable option where Germany cannot. The demand that Germany and Europe increase their spending on defense is really, in Merkel’s eyes, an attempt to draw Germany into the American mode of thought, of never seeing problems as insoluble and never hesitating to seek military solutions – only to find that the problem remains.

For Merkel, Trump is American geopolitics personified. He is enormously powerful and unreasonably confident, and he demands that an alliance of equals serve the American interest as its first responsibility. When she said that Europe must not depend on anyone, what she was saying is that Europe must stick together and not be drawn into the American understanding of the world.

This was bound to happen, Trump or not. America and Germany have utterly different imperatives and experiences. One has known only triumph and relatively minor defeats, the other has been devastated over and over by its own actions. The U.S. is far more powerful and geographically secure than Germany ever was. It is involved in wars and doesn’t understand an alliance that expects U.S. force when its allies need it but can’t offer the same in return. The Americans and Germans are no longer even participating in the same discussion.

The American view and the German view of Europe are incompatible. The future of Europe means far more to Germany than to the United States. The United States can increase fragmentation unintentionally, and this is why Germany has declared itself and Europe self-reliant. The problem is that the very idea of Europe as a political entity and not just a place is in crisis. It is necessary for Merkel to declare self-reliance, but right now, it’s unclear what the self of Europe is.

The Instability of Britain