India held an annual geopolitics conference Jan. 17-19 from which two global news stories emerged, based on statements made at the conference. The Press Trust of India reported the first on Jan. 18, stating that a Sri Lankan government official said that Sri Lanka and India are close to finalizing talks on India’s development of Trincomalee port. The second story was a Jan. 19 report by NDTV regarding comments by the commander of the U.S. Pacific Command, who said that the United States and India are sharing intelligence on the movement of Chinese warships and submarines in the Indo-Pacific, and that “clearly” China could operate a carrier battle group in the Indian Ocean today, if it wanted to.

International conferences are great media fodder. Many important people gather in one place to give presentations and make statements. Most of the time one cannot predict when events will happen. Conferences such as these offer sound bites presented in articles that make it appear that an issue has suddenly become more important. It is not a coincidence that a spate of recent articles focused on tensions between India and China in the Indian Ocean. This Reality Check will address those tensions, but to determine if any of this open-source chatter is important, we must first identify the sources. 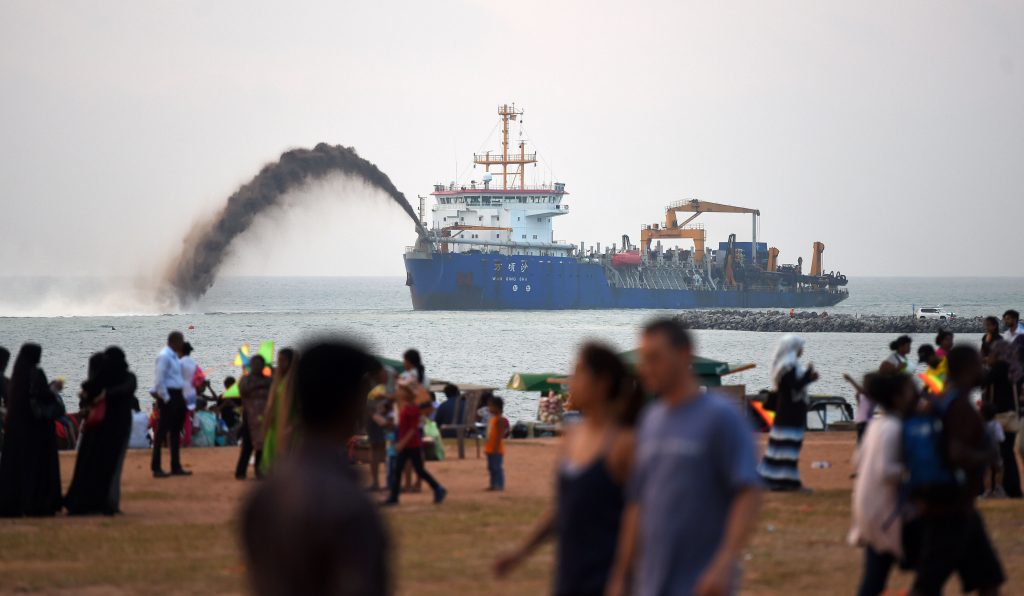 Pedestrians in Sri Lanka walk on the waterfront near the port of Colombo as a dredger pumps sand on Dec. 19, 2016. The works are part of $1.4 billion in real estate development by China. ISHARA S. KODIKARA/AFP/Getty Images

Sri Lanka is located about 30 miles off the southern coast of India, on major maritime trade routes connecting the Middle East and the Pacific Ocean. Due to Sri Lanka’s strategic location, major powers – especially the United States, India and China – have competed for influence there. China’s influence has increased markedly in recent years, with investment and loans pouring into Sri Lankan infrastructure. The Institute of Policy Studies of Sri Lanka estimated that from 2006-15, China provided Sri Lanka more than $5 billion, and Sri Lanka’s minister of development strategies and international trade said last October that China has pledged over $10 billion more for investment in Sri Lanka in the next three years.

Sri Lanka’s problem is that Chinese investment has turned into Sri Lankan debt totaling more than $8 billion. (According to the latest figures from the International Monetary Fund (IMF), Sri Lanka’s debt-to-GDP ratio is 77.2 percent.) One of the most ambitious Chinese projects in Sri Lanka is a deep-sea port at Hambantota and an international airport in nearby Mattala. The port hasn’t attracted the anticipated amount of business. In addition, the Sri Lankan economy is in shambles, facing a balance of payments crisis so severe that the country had to reach out to the IMF for a $1.5 billion loan last year. In dire need of capital, Sri Lanka reportedly reached a deal with China Merchants Port Holdings at the end of last year to sell an 80 percent stake in Hambantota to China for $1.1 billion and to lease China 15,000 acres of nearby land for 99 years. The agreement set off protests in Sri Lanka and raised concerns in both India and the U.S. that China was gaining a foothold in the Indian Ocean.

Those who read Geopolitical Futures know that we are highly skeptical of the practical import of China’s investments and moves in its coastal waters, much less in the Indian Ocean. That said, China’s purchase of an ownership stake in a key strategic Indian Ocean port must be taken seriously, because it raises the possibility that China might eventually establish a permanent base for the People’s Liberation Army Navy at a key point in the Indian Ocean. Other notable developments would seem to confirm that China is making some headway in achieving this goal. For example, China is investing $1.4 billion in infrastructure development in Sri Lanka’s capital and main port, Colombo; it is leasing a Maldives island for 50 years for $4 million; it has promised to pour $46 billion into infrastructure development in Pakistan, most notably at Gwadar port; and it is building its first foreign military outpost in Djibouti by the end of the year.

There are two reasons to continue taking such developments with a grain of salt. One is the limitations of gaining influence through infrastructure investment, and Sri Lanka is a good example. Sri Lanka is not interested in picking a side in the great game being played out in the Indo-Pacific; rather, it is trying to take advantage of the great game. Sri Lankan officials have been adamant that infrastructure projects agreed to with China do not entail basing rights for Chinese ships. And while Sri Lanka accepted money from China, it simultaneously began negotiations with India to take over a stake in another important Sri Lankan port. The U.S. has gotten involved in recent years, reversing a policy of reducing U.S. Agency for International Development funding to Sri Lanka in 2015. The U.S. also is increasing military cooperation with Sri Lanka. U.S. Marines held a theater security cooperation exchange with Sri Lanka in November, and the head of the U.S. Pacific Command attended a conference there the same month in which he highlighted the strengthening relationship between the two countries.

The second reason is that soft power is ultimately useless if it isn’t backed by hard power. Some would say that China has developed enough hard power that its moves should be taken seriously. After all, a U.S. naval commander said that a Chinese carrier battle group could sail into the Indian Ocean whenever it wants. This line of thinking has a few problems. First, China does not have an operational carrier battle group. China has an old, refurbished aircraft carrier it did not build that made its maiden voyage just over a month ago. Because of technological limitations, the Chinese carrier can only field a complement of half the aircraft as a U.S. carrier. China has only graduated two cohorts of domestically trained pilots to fly China’s carrier-borne J-15 fighter jets. China has almost no experience in the coordination necessary to sail a carrier battle group. It has relatively limited anti-submarine warfare capabilities, which means that its carrier would be an easy target for enemy submarines. And China will not have a replacement for at least a few years in the event its carrier is sunk.

China would be operating extremely far from its main base of operations on the mainland. While China is investing in shipbuilding, it has a relatively small number of nuclear-powered ships compared to the U.S. Navy. That means that China must be constantly worried about refueling. China has no permanent basing rights anywhere in the Indian Ocean, despite its investments in infrastructure in various Indo-Pacific countries. For Chinese ships to reach the Indian Ocean, they must first make it out of the first island chain, which is not a foregone conclusion in any large-scale naval conflict. They then would have to make it through the Strait of Malacca. These are both maritime choke points that could be closed off if China becomes too aggressive. China is playing a very long game, and if it is able to overcome some of the obstacles discussed above, some of its investments – and the influence they have created – may become important. But to suggest that they are shifting the balance of power now is to put the cart before the horse.

Chinese moves in the Indian Ocean – whether port calls by Chinese naval ships to Pakistan or new infrastructure deals in countries like Sri Lanka – attract a great deal of attention in India and by extension in the U.S. And joint naval exercises in the South China Sea by the U.S., India and Japan make waves in China, as do U.S. bases in South Korea, Japan and the Philippines. On one hand, these exacerbate tensions and create a need for each side to continuously display their increasing strength. On the other, each side needs to perpetuate the myth of the enemy’s aggressiveness to continue making aggressive moves of its own. For countries in the Indo-Pacific, this can be an unnerving cycle of posturing. But as countries like Sri Lanka and the Philippines demonstrate, it also creates an excellent opportunity to play great powers off each other and attract investment and attention. Until China’s naval capability increases, and until it has permanent bases to project power beyond its coastal waters, most of these displays are for show. That should be kept in mind anytime a rash of articles appears regarding some new tension in the Indo-Pacific.

Islamic State and the Possibility of Chemical Weapons