The summer (at least in the Northern Hemisphere) began with an important referendum in Britain over sovereignty. It is only fitting then that summer should end with another important referendum on sovereignty, this time in the Balkans. Voters in Bosnia and Herzegovina’s Serb-dominated Republika Srpska – one of the two constituent states that make up the larger political entity – yesterday went to the polls to express their views on whether Jan. 9 should remain a holiday to mark the day Bosnian Serbs declared their own state. At the time of writing, preliminary results show voters have chosen to keep the holiday on Jan. 9. However, the fact that the referendum even moved forward is the real story here.

Bosnia and Herzegovina’s constitutional court ruled that the holiday discriminates against other religious and ethnic groups in the country and that therefore its celebration should be considered unconstitutional. The constitutional court on Sept. 17 also approved a temporary ban on yesterday’s referendum. Obviously, the court’s writ in Republika Srpska is lacking. Before the ban, Republika Srpska President Milorad Dodik said the referendum would go forward anyway, and so it did.

The tension between ethnicities and religions has long been a reality in the Balkans. This has always been a diverse and contested battleground, a mountainous and hard-to-control meeting point of civilizations. But the current tension has its most immediate roots in the fall of the Soviet Union. In the wake of the USSR’s dissolution, a series of conflagrations erupted on the fault line between the Soviet Union and the West (and its various allies). The Balkan Peninsula was one of the places where this conflict was fiercest. Yugoslavia collapsed in 1992, amid a series of wars fought along ethnic, national and religious lines. One of these wars was the Bosnian War – it lasted until December 1995, when the Dayton Agreement was signed.

The Dayton Agreement was responsible for setting up Bosnia’s unique political structure. The country was divided into two distinct entities: Republika Srpska, which has a population that is roughly 80 percent Serb and Orthodox Christian, and the Federation of Bosnia and Herzegovina, roughly 70 percent of which is populated by Muslim Bosniaks, along with a significant Catholic Croat minority. (There is also a third entity, Brčko District, which is both self-governing and shared by the two other sides.) The Dayton Agreement also established the constitutional court, and the political leadership of Republika Srpska is undercutting the Dayton Agreement’s legitimacy by defying the ruling of the court.

The court’s ruling, however, is not the reason close attention should be paid to yesterday’s referendum. On the face of it, this referendum is just about whether Jan. 9 should be celebrated as a holiday. The deeper truth is that merely by having the referendum, Republika Srpska is declaring its disillusion with the current political arrangement. It communicates a desire on the part of its people to rule their own affairs, to celebrate their own holidays and to speak their own language.

The desire of nations to have national homelands is not an unreasonable one. National self-determination is the backbone of the international political system. After World War I, the League of Nations and the mandate system were partly designed to bring immature political entities closer to realizing the dream of a nation-state. Self-determination was also not just an organizational principle; it was a moral one that was widely accepted. Even the United Nations was founded on this principle. Article 1 explicitly says that the purpose of the United Nations is “to develop friendly relations among nations based on respect for the principle of equal rights and self-determination of peoples.”

Somewhere along the way, the fact that national self-determination was the organizing principle of the political world was forgotten, or at least swept under the rug. Not only that, it was increasingly denigrated over time as a less-than-ideal pursuit. Part of this made sense. National self-determination is all well and good if a group has a defined territory on which to set up a nation-state. Reality, however, is rarely so simple, and different groups have competing claims over areas with mixed demographics. This is the case in the Balkans – in part because of geography. It is a hodgepodge of borders, religions and ethnicities. But ignoring the divisions and pretending that such competing claims could be permanently solved with intricate political institutions makes much less sense, as is becoming more clear all the time. 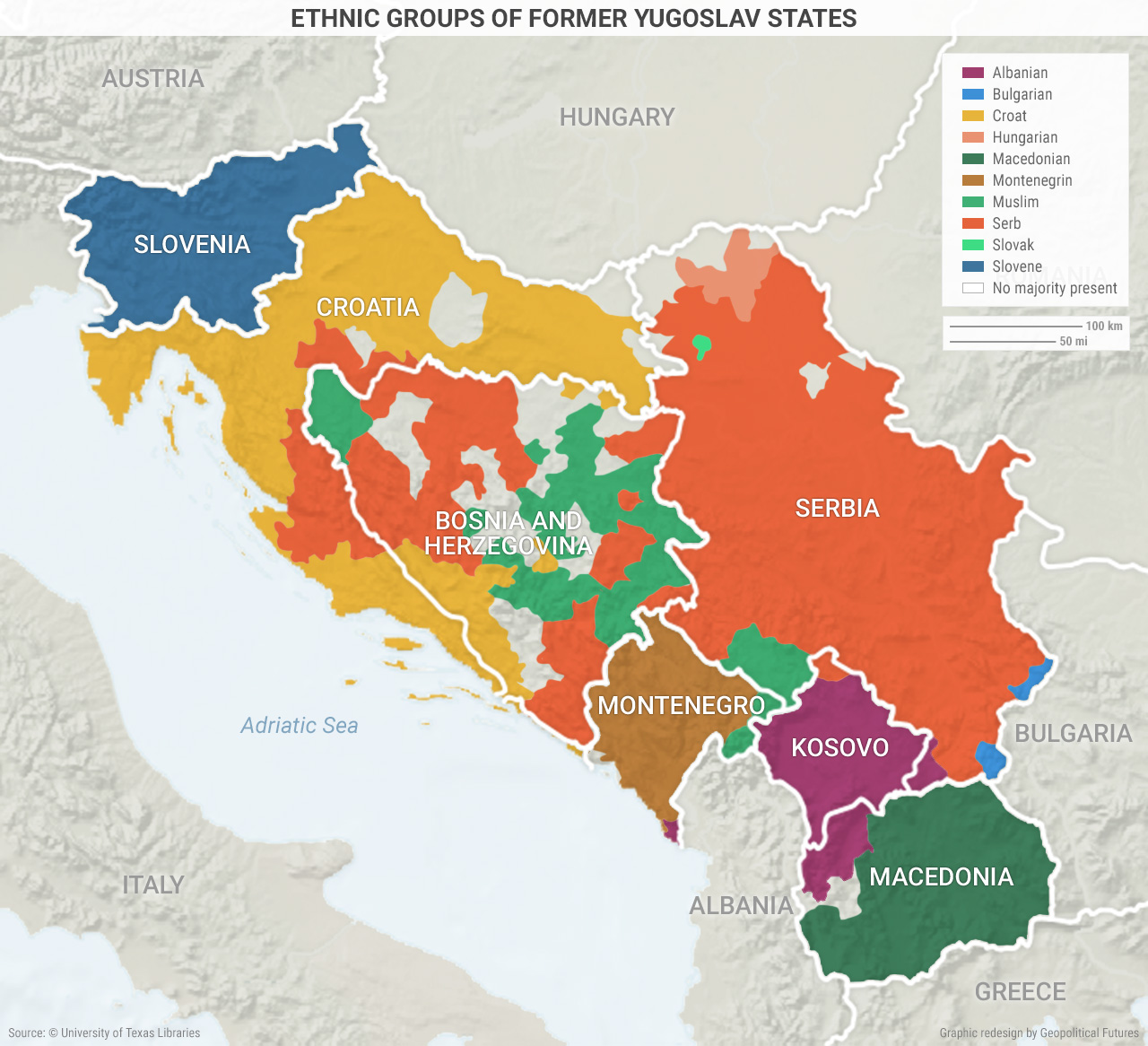 Austrian diplomat Wolfgang Petritsch served as the high representative for Bosnia and Herzegovina from 1999 to 2002. It is the responsibility of the high representative to make sure that the Dayton Agreement is properly implemented. In 2006, reflecting on his time in this role, Petritsch said that the Dayton Agreement had been such a success that it could be used as a model by the rest of the international community for resolving conflicts, and that Bosnia had been put “on the road to Brussels.”

Petritsch meant this positively, and indeed, in 2006, the European Union was arguably at the height of its power and Continental appeal. Since then, much has changed. The European Union has struggled to weather both financial and political crises, and most important, prosperity, which membership once promised, is no longer guaranteed. All of the western Balkans are on the edge of the European Union, and all have weak economies that are under a great deal of pressure and will come under even more pressure as economies on the Continent continue to unravel.

What hasn’t changed is that these various ethnic groups in the Balkans still have strong identities, and without the promise of being part of a unified Europe, they want to have countries of their own. The United Kingdom is far more powerful and far richer than any of the Balkan countries, and so the vote of its people to leave the EU carried with it a deep sense of consequence to the future of the European project. But yesterday’s banned referendum also has serious implications. It reflects the fact that many on the periphery don’t want to be on the road to Brussels anymore. It also is a blow to NATO, the United States and all the countries that were involved in the Balkan Wars and sought a way to keep such different and hostile groups together without giving each their own nation-state.

The rest of Europe has always looked down on the countries of the western Balkans – they are seen as behind the times, as economic basket cases, as constantly squabbling, as the last vestige of real barbarism on a now peaceful continent. I don’t view the Balkans as behind the times. I view them as trendsetters in this regard. Yesterday’s referendum may well turn out to be an inconsequential vote over a national holiday in an extremely fractured and relatively unimportant country. But it is also an example of a national group on the European Continent without a state of its own defying what it sees as an unacceptable political status quo. There are deep forces at work hidden beneath Europe’s official borders, and they are only going to get more pronounced in the coming months and years.

Germany Warns of the Danger of War