Summary There is a deep connection between the end of the Cold War, the Yugoslav wars and the attacks in Brussels. They may appear separate but are deeply interconnected. The release of tensions between the United States and the Soviet Union triggered a seismic shift along the fault line of U.S. containment strategy that runs through the Middle East. These tremors are still playing out today.

Radovan Karadžić, former president of Republika Srpska, a Serbian enclave in Bosnia, was found guilty of genocide by a United Nations tribunal yesterday. He was accused of the deaths of more than 8,000 Bosnian Muslims in the 1990s. The date of his conviction, March 24, is also the 17th anniversary of the beginning of the NATO bombing campaign in Serbia that led to separation and independence of Kosovo from Serbia. It is also the week in which members of the Islamic State carried out an assault on Brussels. The three events are intimately connected.

The American strategy during the Cold War was to contain the Soviet Union. One part of the containment line ran through Europe. Another part, after the Sino-Soviet split, ran along the northern Chinese border. The third line ran from Yugoslavia to Afghanistan – through the Islamic world, with predominantly Muslim countries on each side of the line. The tremendous force of the Western alliance, China and the Soviet Union had frozen these boundaries into place. With the exception of Afghanistan later in the Cold War, this created a tense but coherent region. Various countries were in different alliances, and some in none, but on the whole the Cold War brought a relative stability to the region. The shifts that took place were managed by the great powers to limit their destabilizing effect along the line of confrontation. 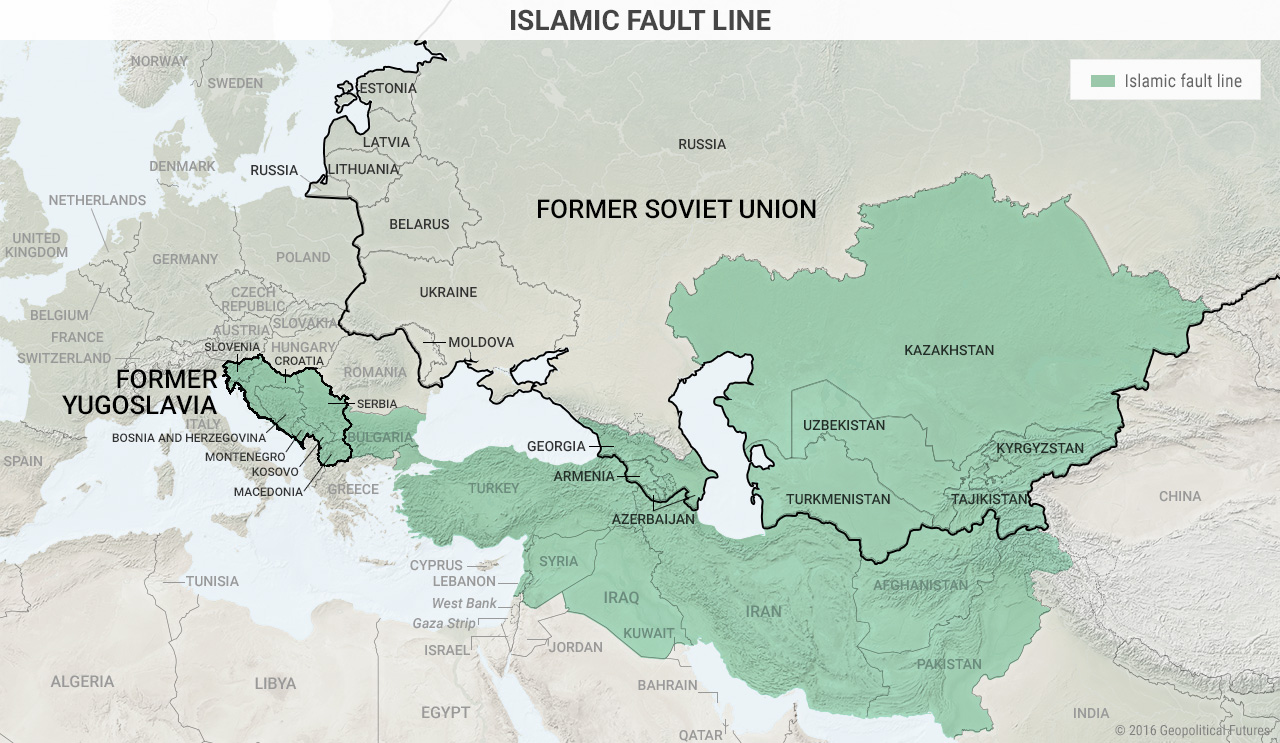 When the Soviet Union collapsed and the line disappeared, three things happened. In Europe, Western-style democracies emerged in the former Warsaw Pact countries. In China, the People’s Liberation Army and the Communist Party shifted their focus to economic development. And the line from Yugoslavia to Afghanistan destabilized. It did not destabilize all at once, or even quickly. But as the force field between the U.S. and the Soviets disappeared, the region regained its autonomy and destabilized. Put another way, the Muslim world destabilized, and Muslims confronted the Christian world that had shaped their map.

This began in Yugoslavia. Yugoslavia was a country invented after World War II, containing Muslims and Christians, with a wide range of bad memories about each other and therefore hostility. After World War II, Yugoslavia was frozen into place by two forces. One was the communist government of Josip Broz Tito, which submerged ethnic and religious difference under its government apparatus and security structure. The other force freezing Yugoslavia into place was the fact that, having come to power independent of the Soviets, Tito did not want to become a Soviet satellite. Therefore, Yugoslavia maintained a neutrality tilted mildly to the West. That stance froze Yugoslavia, as neither the U.S. nor the Soviets wanted to take the risk of shifting its orientation, and Tito did not want do anything to trigger a change in policy.

Tito died in 1980, and Yugoslavia became increasingly fractious. But it was not until after the fall of the Soviet Union that a fragmented Yugoslavia unfroze and went to war. This was not a Muslim-Christian war, as it was also a war against Croatian Catholics and Serbian Christian Orthodox, along with numerous other confrontations. But it was the Serbian-Bosnian confrontation that became the bloodiest and the Serbian-Albanian confrontation that triggered NATO’s air attacks. Both were confrontations between Christians and Muslims and one was what today’s verdict was about.

The depth of the hatred can be seen in the Bosnian genocide, but it must be remembered that all sides carried out brutal actions. By 1999, the mere fear that something might happen in Kosovo – it had not yet – triggered an air campaign in Kosovo and in Serbia (then still called Yugoslavia) that lasted more than two months. One way to look at this war is that it was the first warning to the Europeans that Europe was still capable of atrocity. But the Europeans always had an odd view of the Balkans as a place in Europe but not of Europe. They took home few lessons from there.

The second and more useful way to look at the war in Yugoslavia is that this was the first violent post-Cold War confrontation between Muslims and Christians. Most view Yugoslavia’s horrors as neither European nor connected to other events. I regard this as the first part of the collapse of the confrontation line of the Cold War, and the first open warfare between Christians and Muslims. It was not unique or separate. It was an opening event that spread throughout the Islamic region that had been frozen in place by the Cold War.

The 1990s were a decade of destabilization and redefinition. One of the most important parts of the redefinition was the decline of the Soviet-supported secular Arab groups like the Palestinian Liberation Organization, and the rise of a consciously Islamist movement in the Muslim world. In a way, it meant the decline of Fatah and the rise of Hamas. But it also meant that secular regimes, like those of Egypt, Syria and Libya, were losing their international foundations.

As the artificial strength of the Cold War diminished, what emerged was an extension of what happened in Yugoslavia. Under the many forces let loose, the most lasting was the re-emergence of Islam as a significant political force, and a force that at least in parts, saw itself as confronting Europe and Christianity. In Yugoslavia we saw both the Christians and Muslims rising against each other.

Geopolitical earthquakes may take a generation or more to play out. Today, we see Moammar Gadhafi dead, Bashar al-Assad embattled and the Egyptian secularists struggling to hold on, but the common denominator is the religious confronting the insufficiently religious. But there is another dimension, which is the Muslim facing the Christian and vice versa. And it should be remembered that for the Islamist, Christianity has been a historical enemy since well before the Crusades. This view and force was suppressed but never eliminated during the Cold War.

You can see its return in Brussels, where one of the factions generated after the end of the Cold War, the Islamic State, struck randomly at Europeans regardless of who they were or what they believed. And obviously this is stirring up anti-Muslim sentiment, as is inevitable. The Muslim question, whether a matter of terrorism or immigration, has become the core European problem, just as the Christians are a core Muslim question.

And all of this can be glimpsed in Yugoslavia, where this cycle of endless cycles began. The events in Bosnia and Kosovo were both the settling of Yugoslav scores flowing from the European creation of Yugoslavia and the opening of the chapter in Christian-Muslim confrontation that we are living through now. The trial of Ratko Mladić ended one phase, 20 years after the deed was done. But while the Serbs may have been the bloodiest, they were far from alone. And now they have many more joining in the fray. As Europe sits on the edge of action – of what sort is unknown – and the Muslim world boils, we can look back to Yugoslavia as the preface few of us saw.