Earlier this week, the Moscow Patriarchate – the leadership of the Russian Orthodox Church (ROC) – said that it would not participate in an upcoming meeting of the Pan-Orthodox Council. This came after the Orthodox churches of Bulgaria, Syria, Georgia and Serbia (so far) decided not to attend. Then yesterday, the Ukrainian parliament passed a resolution asking the current Archbishop of Constantinople and Ecumenical Patriarch to declare the Ukrainian Orthodox Church independent of the ROC.

The Russian Orthodox Church withdrawing from this meeting is significant for Russia’s relations with the countries in its historical buffer region. It also concerns the relationship between religion and state in a world where the basic constituent element is no longer primarily tied to faith or empire, but rather to the nation-state.

Today, there is an alliance between the Russian government and the Russian Orthodox Church. Russian President Vladimir Putin has used the ROC to help unify Russia and to project Russian influence into other Orthodox Christian countries.

This close relationship is the return of a historical alliance. Overall, the 20th century was a disastrous period for Russian-ROC relations. The ROC had been closely tied with the government of the Russian tsars, enjoying numerous benefits and privileges as a result. During the Russian Revolution, most of the ROC backed the White Army against the communist Bolsheviks. They did so because they knew what the communists thought of religion. Lenin wrote in 1905, “Religion is a kind of spiritual gin in which the slaves of capital drown their human shape and their claims to any decent human life.”

After Hitler invaded the USSR, Stalin removed many of the restrictions on the ROC to rally Russian patriotism in the fight against Nazi Germany. But in 1959, Nikita Khrushchev cracked down once more, and until the Soviet Union’s collapse, the ROC remained severely restricted by Soviet rule. It was only after the Soviet Union fell that the ROC began to rise in importance, in part due to people’s natural impulse to find meaning after the collapse of a governing ideology (that was the only one some generations had ever known), and in part as a politically expedient way for Russia’s rulers to keep the country strongly united.

Putin has used his alliance with Patriarch Kirill of Moscow to extend Russian influence beyond Mother Russia. The Russian Orthodox Church is made up of different parts. The Ukrainian Orthodox Church enjoys autonomy in its affairs but is still a branch of the ROC. The Belarusian Orthodox Church, despite recent requests for greater independence, is an exarchate of the ROC (exarchate is the Byzantine word for a province that was ruled by the Byzantine emperor). Self-governed churches in Estonia, Latvia and Moldova, as well as metropolitan districts in Kazakhstan and Central Asia are all technically part of the ROC.

One of the many reasons for the split between Catholicism and Orthodoxy in 1054 was a disagreement over the role of the Pope. Catholics believe supreme authority rests with the Pope. While some Orthodox Churches recognize the Archbishop of Constantinople as a “first among equals,” the leadership and decision-making of Orthodox Christianity is regional, and all bishops are considered equal.

It is no accident that the Serbian Orthodox Church and the Bulgarian Orthodox Church are among those joining Russia in skipping the council. These churches have historically close ties to the ROC. This closeness goes back centuries to when Serbia and Bulgaria were under Ottoman Empire rule and part of the Russian Empire’s geopolitical strategy was to actively support Slavic Orthodox communities living in the Ottoman and Austro-Hungarian empires.

Other Orthodox churches are not necessarily close to the ROC. Romania also fought alongside Russia in that war and had its independence recognized in 1879 as a result, but the Romanian Orthodox Church kept its religious rights during the Ottoman occupation and thinks of its Christianity as stretching back to the Byzantine Empire. The Greek Orthodox Church is its own entity and is further removed from the Russian sphere of influence. Some of the Orthodox churches respect the Archbishop of Constantinople because of the prestige of his office.

The ROC, on the other hand, sees the Archbishop of Constantinople as a figure whose flock is only roughly 180,000 people in present-day Istanbul – a far cry from the over 100 million Russian Orthodox Christians. A council of Russian bishops installed its own leader in 1448 without the consent of Constantinople, which fell to the Ottomans five years later in 1453. The ROC has been operating with this independence and with a sense of being the major heir to the fall of Orthodoxy’s historical capital for over six centuries. Part of the ROC’s influence comes from the fact that it represents more than 100 million people, or just under 40 percent of all Orthodox Christians in the world.

Russia’s resurgence into its borderlands has brought many of these long-forgotten dynamics back into the limelight. The history of the Eastern Orthodox Church is long and convoluted, filled with schisms and doctrinal arguments. But while those disagreements are often theological, they also represent very real political divisions that can influence current politics. The Russian Orthodox Church is a powerful potential tool for Russia to use to establish legitimacy and engender sympathy in some of these regions.

Which brings us to the more abstract significance of this intra-Orthodox spat. Religion and geopolitics are not separate. Religion is as much a part of geopolitics as are military affairs and economics. The importance of religion has diminished since the 19th century, when nationalism rose across Europe and fundamentally reshaped the Continent and the world.

Nationalism rules the day – but religion is a potential mode of political organization that has not completely dissolved into the past. Look no further than the Islamic State for evidence. In the Middle East, a combination of the disillusionment with dictators sponsored by Western imperialism, the failure of Pan-Arabism and socialism, and a lack of opportunity have caused many to turn to religion as a source of meaning in the world. Islam is the only thing that has ever been able to unite the Middle East.

We don’t often think of Europe in quite the same terms. How could we, when the European Continent gave us the Renaissance, Enlightenment and Scientific Revolution. But the Arab world was also once the beacon of intellectual life of the world. In geopolitics, nothing is permanent. 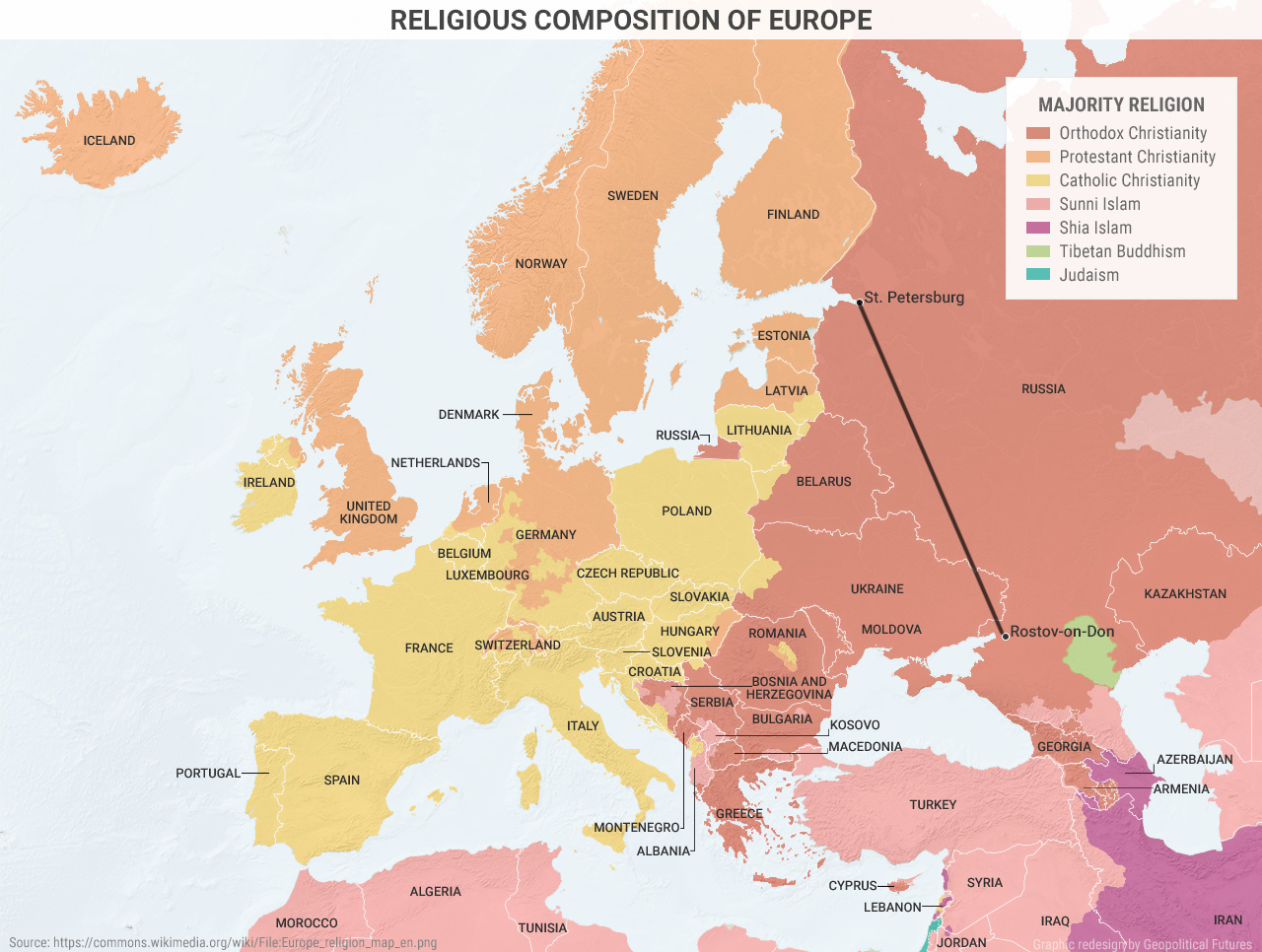 The map above combines national boundaries with religious ones. Some observations immediately jump out. We have drawn a line in Russia that marks the area behind which Russia cannot retreat or else risk its national security. The Orthodox areas beyond that line are Russia’s traditional buffer zone where it seeks to re-establish some of its former influence.

The Balkans are a hodgepodge, not just of nationalities, but also religions and make up the borderland between Turkey and Europe – between Christendom and Islam. Western Europe is largely Catholic, but Germany, as it always has been, is at the center of the European Continent and yet is not quite like the rest of its neighbors. Across various channels and seas, the United Kingdom and Scandinavia have their own faiths.

Most striking is that Eastern and Western Europe are divided by religion. The Schism of 1054 separated Catholicism from Orthodoxy. One could argue that to this day it continues to mark the boundary between East and West.

The days of popes or patriarchs crowning emperors, declaring crusades or other wars, and controlling the geopolitical fates of Europe have long passed. But occasionally, from the depths of the past, the (holy) ghosts of history reach out to shape the present. The Russians no longer have the ability to dominate these areas by force. But despite this relative weakness, it still has tools at its disposal, and the church is one of them.

The Russian Orthodox Church pulling out of a council meeting with the rest of the Orthodox world then tells us much about Russia’s relations with its would-be buffer zones. But it also offers the chance to think back to a time when religion, more than any political entity or ideology, was arguably the most potent way of organizing human beings into groups larger than just one’s family or tribe. And while religion does not hold the same type of overt power today in Europe that it once did, the inheritance of the centuries of its power remain very much alive in today’s conflicts. Nietzsche said God is dead. But that never meant that belief can’t be resurrected.