On April 18, U.S. Defense Secretary James Mattis paid a two-day visit to the Saudi capital as part of a weeklong regional tour. At a press conference, the former senior American commander said that the kingdom is “stepping up to its regional leadership role.” Mattis also referred to Saudi Arabia as the United States’ best counterterrorism partner.

Mattis’ warm words require some explanation because U.S.-Saudi relations have been on the decline for over a decade. Historically, the United States has treated Saudi Arabia as a close ally, despite the massive difference in values between the two countries. But the relationship was damaged by the 9/11 attacks, which were carried out by a group that shares the same core Salafist ideology as Saudi Arabia. The 2003 decision by the administration of President George W. Bush to carry out regime change in Iraq, which empowered pro-Iranian Shiite forces in the country, further strained relations between the U.S. and Saudi Arabia. The split was deepened further by the decision of President Barack Obama’s administration to sign a nuclear agreement with Iran in 2015. The deal gave the U.S. a potent ally in the fight against the Islamic State but has energized Tehran at a time when Riyadh’s fortunes are declining. 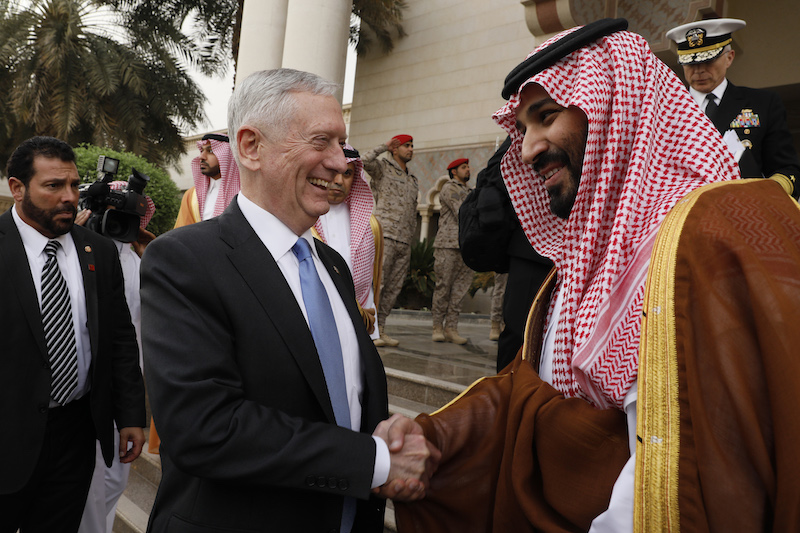 This more recent trend is in sharp contrast to the two countries’ relationship since the famous 1945 meeting between the modern Saudi polity’s founder, King Abdulaziz bin Abdulrahman al-Saud, and then-U.S. President Franklin D. Roosevelt aboard the USS Quincy in Great Bitter Lake in Egypt. In the aftermath of World War II, the United States took over as the Middle East’s great power patron. Previously, Great Britain served in this role. The British had a very close relationship with King Abdulaziz during the first three decades of the 20th century. During this time, the latter led a band of tribal religious warriors who conquered much of the Arabian Peninsula and, in 1932, founded the Kingdom of Saudi Arabia. The Saudis relied on the British as their security guarantor, especially in the days before the monarchy could profit from the export of crude oil, which was discovered in 1938. It was only natural for the Saudis to embrace the Americans when the United States emerged as the leader of the Western world.

From the U.S. point of view, the Soviet Union had gone from being an ally in World War II to America’s biggest adversary. Washington pursued a containment strategy against the Soviets. This strategy required allies, especially in the Middle East where the Kremlin also sought alignment with left-wing Arab forces whose fortunes were rising at the time. Saudi Arabia, with its ultraconservative religious monarchy, was a natural ally in the American effort to counter pro-Soviet secular regimes that emerged in many Arab countries including Egypt, Syria, Iraq, Libya, Algeria and South Yemen, as well as the biggest Arab non-state actor at the time, the Palestine Liberation Organization.

As a result, the Saudi regime – in addition to the other Arab monarchies (especially in the Persian Gulf) as well as Turkey and Iran – became a close ally of the U.S.-led Western camp. Ironically, in an effort to counter the Soviet Union and its secular proxies, the United States empowered Islamist actors. The U.S.-Saudi relationship further strengthened when anti-American Shiite Islamists overthrew the monarchy in Iran in the 1979 revolution. But nowhere was the American-Saudi alliance against communism more significant than in Afghanistan in the 1980s. The U.S. and Saudi Arabia, in cooperation with an Islamist military regime in Pakistan, backed religious insurgents against Soviet troops supporting the communist Afghan regime.

The Saudis spent billions of petrodollars to help the United States during the Cold War. In return, the United States remained the primary guarantor of the kingdom’s stability. In those days, the U.S. overlooked the undemocratic nature of the Saudi regime and its deeply austere Salafist ideology. The U.S. deployed 500,000 troops to protect the Saudis after Iraq invaded and annexed Kuwait in 1990, leading to the Gulf War in 1991.

That year was a major turning point. The Soviet Union imploded, ending the Cold War. At about the same time, a global jihadist movement in the form of al-Qaida emerged as a threat to American global interests. As we showed in our recent Deep Dive, transnational jihadism was the natural outgrowth of Salafism, which had its roots in Saudi Arabia. Transnational jihadism was further empowered by the U.S.’ need for radical Islamist militiamen to fight the Soviets and their communist allies.

Therefore, the United States ignored the organic links between the Saudi regime and jihadists for another decade. Al-Qaida designed the 9/11 attacks to break the U.S.-Saudi alliance. The jihadist movement did not succeed in this goal, but the attacks weakened the U.S.-Saudi bond. A major divergence between U.S. and Saudi interests emerged. It gradually became clear to the Americans that simultaneously fighting jihadists and maintaining ties with Saudi Arabia was not possible.

The jihadists are not allies of the Saudi regime; more than anything, they want to topple it. However, given the overlap in the identity and ideology of jihadists and the Saudi kingdom, Riyadh is unable to counter the transnational movement. The Saudis cannot change their Salafist nature, and fighting jihadism could weaken the Saudi regime. Since Washington needed a partner in this fight, it entered into a complicated but cooperative relationship with Riyadh’s major nemesis, Tehran.

2011 was another watershed year. The United States pulled its forces out of Iraq, leaving the country in the Iranian orbit. By that time, the Arab Spring was a year old and had begun to hollow out the Arab world. The only major Arab state unaffected by the Arab Spring is Saudi Arabia, which has been forced to deal with the regional mess. Making matters worse was the 2014 plunge in oil prices, which badly wounded the Saudis.

Even though their interests have diverged, Washington still needs Riyadh because of the U.S. balance of power strategy. The United States does not want to see Iran take advantage of the chaos in the Arab world and accumulate a disproportionate amount of influence. Toward this end, the Americans are also leaning on Turkey to assume a more prominent regional role, especially in the fight against the Islamic State. Turkey is the region’s natural leader, but because of its domestic issues, the Turks are not in a position to intervene at this time.

This means that the Americans need the Saudis – even though Riyadh cannot ensure its own security and is working closely with the Pakistanis to get the Islamic Military Alliance off the ground. At the very least, the United States does not want to see the Saudis weakened. This would create more room for not only Iran but also IS. It is this fear that now forms the basis for the U.S.-Saudi partnership.