These days there is a great deal of noise over the fate of the Iran nuclear deal. It is going to be very difficult to roll back the agreement, announced a year ago. Therefore, it remains to be seen what the administration of U.S. President Donald Trump can do to limit the extent to which Iran benefits from the respite in sanctions. The issue is not a nuclear Iran or one with ballistic missile capability, but rather an economy that is improving because of the nuclear deal.

On Iran, one comes across two main types of stories, depending from where they originate – Washington or Tehran. In the United States, the newly installed Trump administration appears as though it is trying to renegotiate the nuclear deal. Meanwhile, in Iran, President Hassan Rouhani’s opponents – largely from within the clerical and security establishments – continue to claim that the country has not benefited from the nuclear deal. 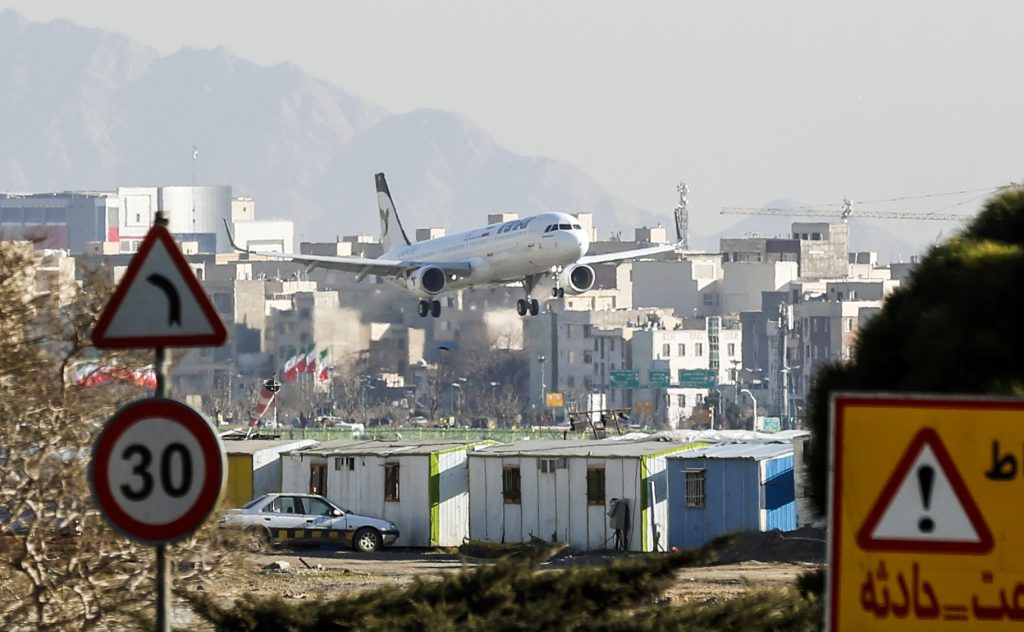 An Airbus A321 arrives at Mehrabad International Airport during delivery of the first batch of planes to the state airline company Iran Air in the capital, Tehran, on Jan. 12, 2017. The aircraft arrived as part of an order for 100 Airbus planes after the lifting of international sanctions on the Islamic republic. ATTA KENARE/AFP/Getty Images

Reversing the deal would be difficult since it is a multilateral agreement. Undoing the agreement thus would entail a complex process where all major world powers would agree to do so. Rhetoric aside, senior members of the Trump administration, particularly Defense Secretary Gen. James Mattis, do not want to reopen the proverbial Pandora’s box. That said, the bellicose rhetoric on this issue is useful in shaping Iranian perceptions and keeping them in check.

Similarly, the claims from hawks within Iran’s various power centers also are disingenuous. Those claims are designed to undermine Rouhani, especially ahead of his re-election bid in May. The Iranian president’s adversaries make a number of different arguments. The main one is that Iran has not benefited from the nuclear deal because sanctions relief has not led to economic benefits, especially in the life of average citizens.

Reports do suggest that ordinary citizens have yet to benefit from the financial gains of a respite in sanctions. But this is natural because a trickle-down effect takes time to materialize. The agreement went into effect only a year ago. That said, the Iranian economy has improved, which is the most notable geopolitical development taking place in Iran.

During the 2015 Persian calendar year (from March 21, 2015 to March 20, 2016) before sanctions were lifted, Iran’s economy grew at a meager pace of 0.5 percent. In sharp contrast, economic growth in the six-month period ending on Sept. 20, 2016 was 7.4 percent (5.4 percent in the spring and 9.2 percent in the summer). The bulk of this growth was due to Iran resuming crude exports as oil sector growth totaled 61.3 percent (55.4 percent and 67.2 percent in the first and second quarters, respectively). Last week, Petroleum Minister Bijan Namdar Zanganeh announced that Tehran was producing 3.9 million barrels per day (bpd) – slightly shy of the 4 million bpd mark before the 2012 sanctions went into effect.

In December, Iran secured an exemption from OPEC whereby it did not have to cut production per an agreement that includes members of the cartel and non-OPEC producers such as Russia. Iran has significantly benefited from the easing of sanctions. Because there likely is not a way for sanctions to be reimposed, this trend is expected to continue for the foreseeable future. The Iranians are unlikely to do anything to undermine their current comfortable position.

Iran will cautiously engage in missile tests, which are not part of the agreement and help shape international perceptions. Iranian officials also will continue to issue tough statements threatening to tear up the nuclear agreement in response to attempts by the Trump administration to renegotiate it. But it is highly unlikely that Tehran will do anything to seriously violate the agreement. Instead, Iran likely will build on gains it has made so far.

Iran was a regional power even under sanctions. However, the 2012 sanctions, which crippled its ability to export oil, created a situation in which Iran had reached the limits of how much it could support its regional allies. Sanctions also put the country’s domestic stability at risk. At the same time, its regional position was threatened by civil war in Syria.

Getting out from underneath the sanctions was critical to Iran’s national security interests. The agreement allowed Iran to regain the financial bandwidth to not only stave off potential domestic unrest, but also to play a key role in the region – especially in Iraq and Syria, where it supported allies who staged a comeback. In many ways, Iran has gone from facing threats to trying to exploit opportunities.

Unencumbered by sanctions, Iran’s ability to project power is increasing. It will be expected to better exploit crises in the Arab world. Its economy is improving while its chief regional rival, Saudi Arabia, faces a declining economic situation. Iran’s net strategic position has long been better than that of Saudi Arabia, and this disparity is expected to grow.

The Iran deal was part of the American strategy to create a balance of power in the region. With Saudi Arabia weakening and Iran strengthening, maintaining such a balance becomes difficult. It is not in the U.S.’ interest for Iran to gain a disproportionate amount of power. Nuclear weapons or even conventional military capabilities are not the real threat, but rather an Iran on the path toward international political and economic rehabilitation. While the rhetoric from the Trump administration – like its predecessors – invokes the nuclear and missile issues, what Washington is really worried about is how to ensure Iran can be prevented from enhancing its influence in the greater Middle East.

Pakistan and the Afghan Taliban Are Heading Toward a Fight