Cooperation between Muslim-majority states has always been an aspiration that has failed to materialize. The fate of a Saudi-Pakistani initiative to form a NATO-style military organization for the Muslim world will not be much different. In fact, the “Islamic Military Alliance” is based on Sunni-versus-Shiite geopolitical sectarian logic that has produced intra-Muslim conflicts for centuries. This tactical alignment between certain Sunni Muslim nation-states is unlikely to come together in a coherent form, much less achieve its stated goal of successfully combating jihadists who have pursued a more strategic project of pan-Muslim unity.

Pakistan has asked Iran to respect its decision to play a lead role in Saudi Arabia’s initiative known as the Islamic Military Alliance, The Express Tribune reported on April 4. A day earlier, Tehran’s ambassador to Islamabad said that while the Pakistanis had taken the Iranians into confidence on the move, Iran maintains serious reservations on the matter. Nevertheless, Pakistan’s defense minister on March 29 confirmed speculation that the country’s recently retired army chief, Gen. Raheel Sharif, had been given permission to assume the post of commander of the 39-nation military coalition. The defense minister added that discussions were underway to deploy a Pakistani combat brigade in the kingdom. 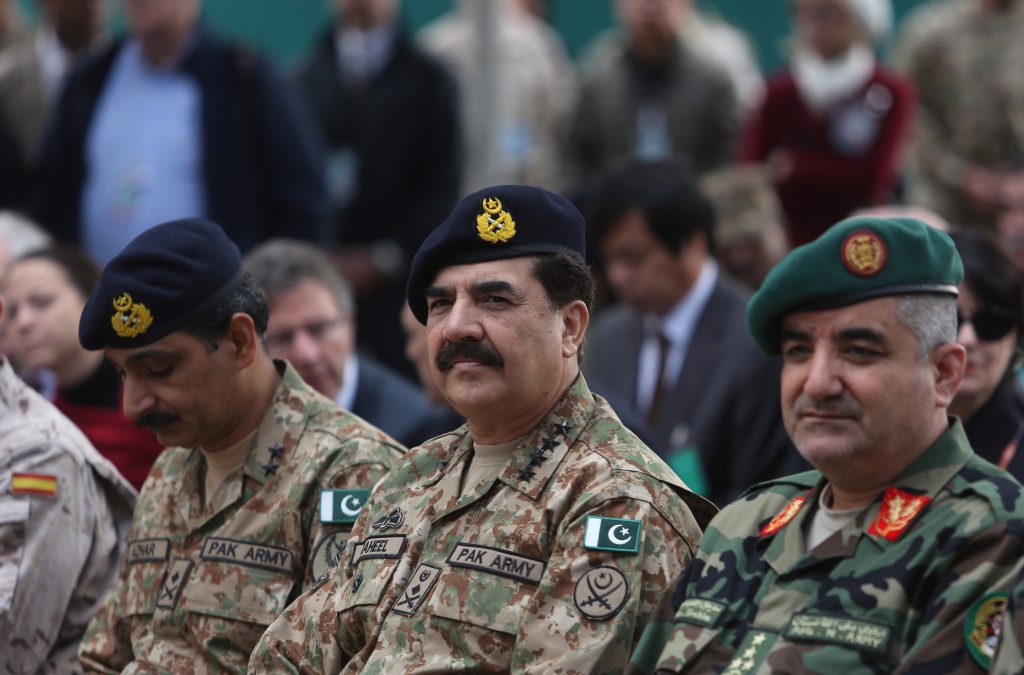 This is not the first time that Pakistan has deployed forces in the Middle East under a bilateral security arrangement. In 1970, Pakistan sent forces to Jordan to help the Hashemite kingdom defeat an insurrection by the Palestine Liberation Organization. Pakistani forces were also sent to the kingdom to dislodge renegade Salafist militants who had seized the holiest Muslim mosque in Mecca in 1979. Twelve years later, Pakistan sent 20,000 military personnel to Saudi Arabia during the 1991 Gulf War. But this time is different because it would be the first time Pakistan is committing troops to an alliance and not for a specific battlespace that had a specific objective.

Historically, Pakistan has had a close defensive relationship with Saudi Arabia. In addition to deploying troops, Pakistan has provided training assistance to all three services of the kingdom’s armed forces. In return, the Saudis have extended financial assistance, crude oil at concessionary rates and diplomatic support. Such is the extent of the relationship that Riyadh has had considerable influence in domestic Pakistani political struggles, especially the one between current Pakistani Prime Minister Nawaz Sharif and the country’s last military dictator, President Pervez Musharraf.

More recently, in 2015, Pakistan tried to resist pressures from Saudi Arabia to join the latter’s geopolitical sectarian struggle with Iran. Islamabad politely declined Riyadh’s request to join the Saudi-led coalition involved in the war in Yemen. A large apex-level civil-military delegation traveled to the kingdom to explain to the king that its troops were stretched thin between the eastern border, where tensions have been high with India, the western border with Afghanistan, and domestic counterinsurgency operations against Taliban rebels. However, the Pakistanis pledged to provide forces if the monarchy’s sovereignty were threatened, as it is now. This threat would explain the decision to have Pakistan’s most respected general head the military bloc and deploy a brigade reportedly along the Yemeni border, where the Saudis have faced attacks from Yemen’s opposition forces led by the Iran-leaning Houthi movement.

So far, Pakistan is the only large Muslim military power that has committed to this Saudi-led military bloc announced in October 2015. Pakistan is also an extra-regional player sitting outside the Middle East. What is significant is that the two major and more proximate military powers – Turkey and Egypt – have both steered clear of this alliance.

The Turks see themselves as the regional hegemon and are in competition with the Saudis for the leadership of the Sunni-majority Muslim world. While engaging in its own competition with Tehran, Ankara does not share Riyadh’s ethnic and sectarian loathing of the Persians. Although it has been dependent on Saudi and Gulf Cooperation Council financial support, Egypt is also not interested in seeing its military forces entangled in Saudi wars, especially when it has much deeper problems at home and in its neighborhood. Given its location in North Africa, Egypt does not have the same concerns as the Saudis regarding Iran and the Shiites.

This general lack of interest among key Muslim states explains why the Islamic Military Alliance has not moved much beyond the conceptual stage. So far, only three things about it are clear: A retired Pakistani army chief will be heading it, Pakistan is committing a brigade to the force, and its headquarters will be in Riyadh. Its size, which of the 39 states will provide troops, and its mission have not been sorted out.

The Saudis have very little experience in managing their own national armed forces, let alone putting together an ambitious project like a Muslim NATO. They are likely to pay for these issues, which will be sorted out by the Pakistani commander once he formally takes over. Riyadh hopes to retain its control through its signature financial lever. Even if the fundamentals of this joint command are sorted out, the question of political control will prevent it from being a coherent force.

Like all multinational entities, the Islamic Military Alliance will be coherent to the extent that its member states will be willing to share power. At a time when the European Union is disintegrating and NATO’s relevance is being seriously questioned, it is unlikely that the proposed Muslim (read Sunni) military alliance will be able to function where the divisions among member states are both wide and deep. Pan-Islamic solidarity is a notion that is romanticized in the Muslim world, but no state within the Ummah is willing to actually invest in it. The nearly 50-year history of the Organization of Islamic Cooperation underscores how the nation-state trumps religious solidarity.

In the case of the Islamic Military Alliance, it is from the start a sectarian project given that it excludes Iran and is geared toward fighting Tehran’s Arab allies. In essence, it is by design aimed at addressing the Middle Eastern reality that Geopolitical Futures identified as the hollowing out of the Arab world since the start of the 2011 uprisings. Saudi Arabia is the only Arab power in the region, but it derives its strength from its financial muscle fueled by being the world’s largest producer of crude oil. It does not have any military capability of its own, as is evident from the outcome of the ongoing war in Yemen. Depressed oil prices have created a domestic crisis for the Saudi political economy, which coupled with the increasing chaos in the region is gradually undermining the security of the kingdom itself. Therefore, the Islamic Military Alliance is primarily designed to protect Saudi national security at a time when the kingdom cannot count on its historical security guarantor, the United States.

From the U.S. perspective, as long as the Islamic Military Alliance fights the Islamic State and acts as a bulwark against other destabilizing forces in the region, it is helpful to American national interests. It has the potential to relieve Washington from doing the heavy lifting on regional security. To a great extent, the U.S. has had to engage in costly interventions because regional pro-Western states have lacked collective security capabilities. Washington would like nothing more than countries like Turkey, Pakistan and others to take the lead in the fight against IS and other jihadist actors, as well as in containing Iran.

However, these countries are having troubles on their respective domestic fronts – not to mention that they have competing and often divergent national interests. Even more alarmingly, IS is pushing its transnational agenda that seeks to take advantage of the increasing power vacuums in the region to establish its caliphate. In many ways, the Islamic Military Alliance is a response to IS’ efforts to forge Muslim political unity. That this Muslim NATO is unlikely to succeed will strengthen the jihadist position that the current regimes are a cause of Muslim disunity.

The Islamic Military Alliance is not designed to be a pan-Muslim alliance. Even at the intra-Sunni level, very few states have shown interest. In addition, the Sunni camp is so divided that it is unlikely to challenge the jihadists. On the contrary, its sectarian architecture will only exacerbate jihadism.