U.S. President Donald Trump is on a charm offensive in Asia. After meeting with Chinese President Xi Jinping at his Mar-a-Lago estate, Trump sent Vice President Mike Pence to a number of Asia-Pacific countries and subsequently invited Philippine President Rodrigo Duterte to the White House. After a phone call with Trump, Thailand’s Prime Minister Prayuth Chan-ocha, head of the military junta that took power in 2014, accepted an invitation to the White House and publicly claimed that Trump assured him that U.S.-Thai relations will be “closer than ever.” Commentators are hailing the move as either a radical readjustment to U.S.-Thai relations or a sign of the U.S.’ new willingness to work with dictators. Neither of these are true. 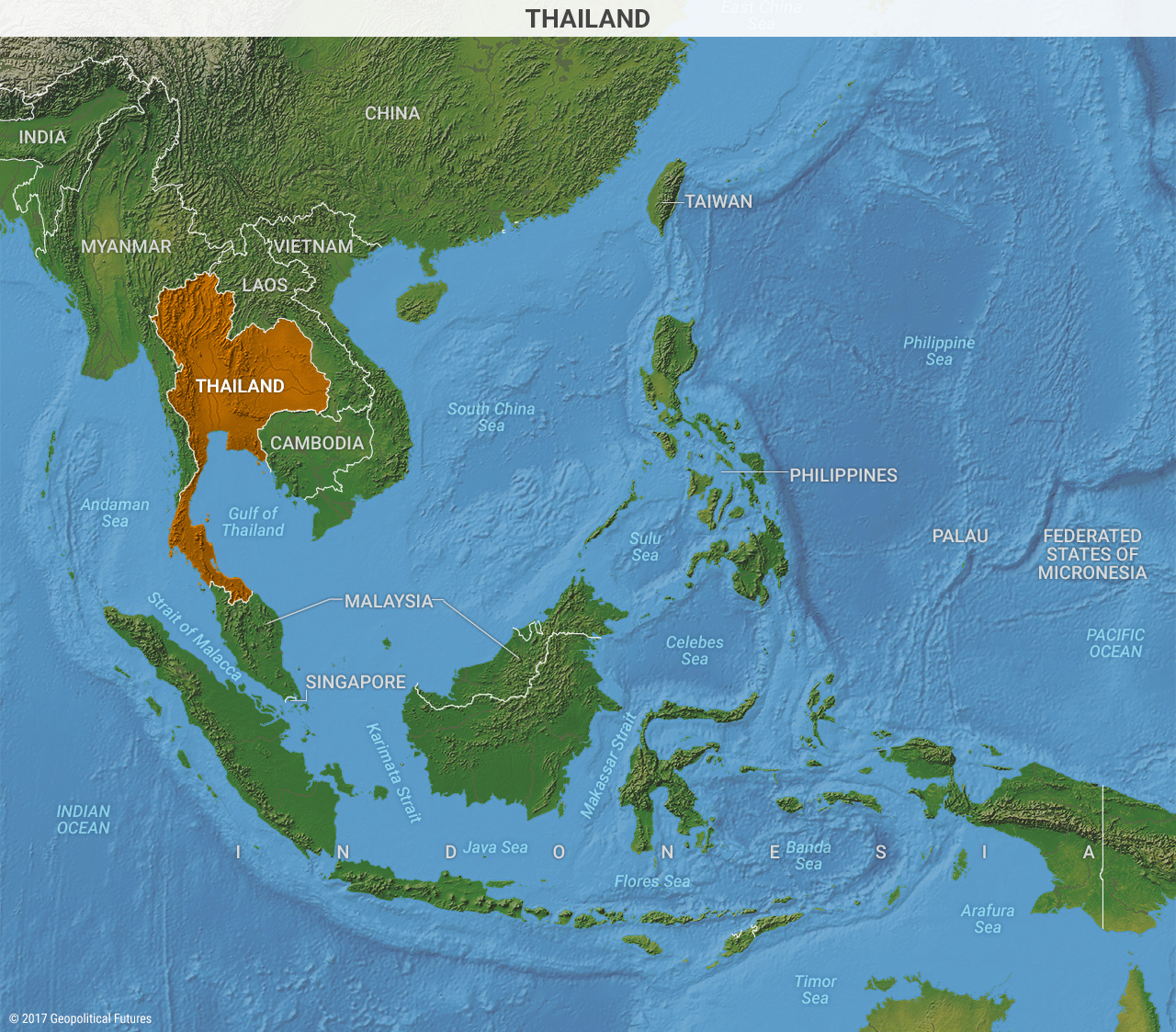 Despite decreased U.S. involvement in joint military drills and a decline in certain forms of financial aid to the Thai military, neither the call with Trump nor the 2014 coup – just like the 12 other successful coups in Thailand since 1932 – have changed the fundamental overlap in U.S. and Thai interests. In response to the nominal slump in U.S. support, Thailand appeared to move closer to China after the coup, developing stronger trade ties and increasing military equipment purchases. However, these two countries’ security imperatives in Southeast Asia are ultimately at odds. In contrast, Washington and Bangkok both want to maintain a stable, unified Thailand. Despite appearances and Chinese attempts to get closer to Thailand, the U.S. and Thailand continue to share vital interests.

Thailand’s main security imperatives are to prevent intervention by foreign powers and to minimize civil conflict. An alliance with the U.S. helps Thailand achieve both: It deters aggression from China and provides the military with funding and equipment to help Thailand maintain control over its diverse population when internal tension arises.

Two historical memories weigh heavily on Thailand’s interpretation of its geopolitical risks: Indochina’s colonial past and Thailand’s effort to unify disparate ethnic groups into a cohesive state. During the period of colonial expansion in the mid-to-late 19th century, Thailand (at that time Siam) was surrounded by Britain’s colony Burma (now Myanmar) to the northwest and France’s growing possessions to its east. In 1893, Siam fought a war with France that resulted in Siam’s defeat, forcing it to cede what is now Laos to France. Subsequently, with the 1909 Anglo-Siamese Treaty, Britain forced Siam to give up some of its western territories. While Siam was never formally colonized, it was aware of its vulnerability to foreign powers with superior military strength. Its escape from the fate its neighbors suffered was due to an event entirely outside of its control: the start of World War I, which disrupted European colonial activities. Through this experience, Thailand learned that it must cautiously use alliances to prevent hostile foreign intervention.

However, Thailand is also well aware of the weakness caused by its internal divisions. The country is composed of ethnic Khmers, Laotians and Malays in addition to Thais. Recognizing that ethnic divisions would continue to leave the country exposed to further foreign intervention, Luang Phibunsongkhram, who was one of the leaders of the 1932 coup and became prime minister in 1938, attempted to unify the country in the 1930s by redefining Thai identity to be more inclusive. It was with this populist, nationalistic base of support that he launched an attack during World War II to reclaim territory that Thailand had lost to Britain and France in the late 19th and early 20th centuries. The debate on national identity continues to divide Thailand today and challenges the regime’s ability to maintain internal stability.

After the war, both the British and French wanted to punish Thailand for its aggression, but the U.S. insisted on leniency. The United States foresaw the coming tension between the West and the Soviet Union and knew that it would need Southeast Asian allies as it carried out its containment policy. U.S. relations with Thailand became increasingly important during the Vietnam War when the U.S. extensively used Royal Thai Air Force bases to conduct bombing raids on the North Vietnamese. The buildup of U.S. force in Thailand during the Vietnam War highlights a dynamic in the U.S.-Thai relationship: It ebbs and flows as larger-scale challenges to U.S. security in the area develop. While there is no active large-scale war in Southeast Asia, tensions with China in the Western Pacific are high, and the U.S. needs allies around China’s periphery to deter Chinese aggression.

The US and Thailand’s Overlapping Interests

The United States’ interests in Thailand have remained fundamentally unchanged since the end of World War II, although Thailand is now part of the U.S. strategy to contain China rather than the Soviet Union. Thailand’s location helps the U.S. project power in a couple directions. While the U.S. does not currently have a large troop presence in Thailand, Thailand allows the U.S. access to the U-Tapao naval air base, which served as a supply center during the Iraq and Afghanistan wars. Furthermore, since Thailand does not share a direct border with China, the U.S. is able to build up force there without presenting an undue threat to Beijing. 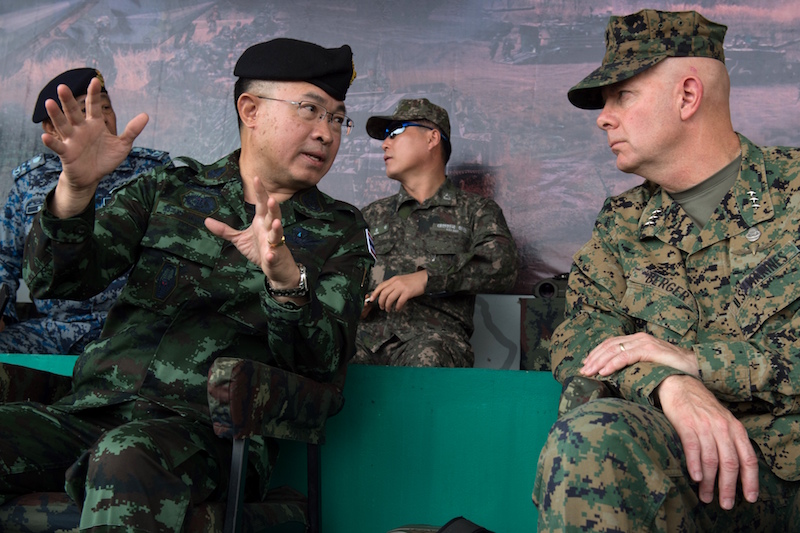 After the 2014 coup, the United States reduced its participation in military exercises with Thailand and cut its financial support to Thailand’s military. The financial cuts were small and military drills with Washington have since resumed, although at a smaller scale. Nevertheless, Thailand’s military junta responded by inviting Beijing to participate in a humanitarian role in its Cobra Gold military exercises, which are usually attended by the United States and are some of the largest multilateral military exercises in the world. Thailand also purchased three diesel-electric submarines from China. Once completed, they will be Thailand’s first submarines since 1951. On the surface, it appeared that Thailand – a historic U.S. ally – was moving closer to Beijing.

To be clear, Bangkok and Beijing share some areas of agreement. For example, in the case of the submarine purchases from China, Thailand is hoping to develop a naval area-denial capability to rival immediate neighbors that could challenge its maritime shipping activities and oil and natural gas reserves in the Gulf of Thailand. Singapore, Malaysia and Indonesia all have submarines. The Gulf of Thailand does not sit within Beijing’s nine-dash line claim to the South China Sea, and Thailand has made no claim on what Beijing considers Chinese territory in the South China Sea. At the same time, several countries that Thailand is attempting to deter have made claims that conflict with China’s in the South China Sea. On this issue, both China and Thailand benefit from cooperation.

But despite specific areas of accord, China’s and Thailand’s broad regional strategies clash. As Geopolitical Futures has discussed before, China will attempt to sustain sufficient domestic divisions within its Southeast Asian neighbors to prevent any single country from accumulating too much power on its southern border. It has done this extensively in neighboring Myanmar by supporting ethnic-Chinese rebel groups in Myanmar’s north and northeastern states, despite publicly purporting to support its government. China’s intervention in Indochina in 1979, which resulted in the Sino-Vietnamese War of 1979, was another example of China executing its imperative to keep power divided along its borders. When a recently unified Vietnam invaded Cambodia in what appeared to be the first move to establish Southeast Asian hegemony, China attacked Vietnam and inflicted heavy casualties on the Vietnamese army (an estimated 50,000 Vietnamese soldiers and 70,000 militia were killed) in a period of about four weeks.

While China faces less of a threat from Thailand than from its direct neighbors, since the two countries share no direct borders, it will nonetheless continue be in China’s interest to prevent the emergence of a unified, ethnically integrated, nationalistic Thailand that could challenge the existing balance of power on the Indochinese Peninsula. However, asserting central government control over greater parts of the ethnically diverse country remains a core Thai imperative. Thailand wants to be more unified, and China wants divided neighbors. Their interests conflict. The U.S., on the other hand, wants a unified Thailand. The U.S. sees a stable Thailand as a reliable military partner, from which it can launch attacks and station troops. The U.S. and Thailand want the same thing – a unified, secure Thailand – but for different reasons.

Appearances can be misleading. Despite U.S. condemnation of an illiberal military junta seizing control of the Thai government, the U.S. still needs a strong ally in mainland Southeast Asia. Similarly, Thailand needs an alliance with a major power whose long-term strategy does not depend on keeping it weak and divided. While Trump’s call with Prayuth seems like a step toward re-establishing stronger relations with Thailand, the two countries’ interests have continued to overlap despite the most recent coup and regardless of what the U.S. says in public about the current composition of Thailand’s government.