A couple days ago, President Donald Trump invited Philippines President Rodrigo Duterte to visit the United States. On Wednesday, Chinese President Xi Jinping called Duterte. The reason for that phone call has not been revealed, but on Monday, Duterte floated the potential of joint exercises between the Philippine and Chinese navies. Other events have taken place between the two countries, including a visit to Manila by the Chinese vice premier in March. In the meantime, relations between the United States and the Philippines have been rocky, particularly because the administration of President Barack Obama took a hostile position on Duterte’s war on drugs, which included extrajudicial killing of suspected drug dealers by police. Duterte expressed his contempt for the United States as well. At times, he also expressed his dislike of China. Based on Duterte’s behavior, observers concluded that he might be unstable. Now the Americans and Chinese have begun courting him.

Regardless of Duterte and his varying moods, the Philippines has emerged as a critical country – perhaps the most critical for the balance of power in the Pacific.
The South and East China seas are surrounded by a series of small islands running from Japan to Indonesia. The islands are spaced in such a way that passage between them becomes a choke point forcing Chinese ships into a narrow lane that is highly vulnerable to air and sea interdiction. China depends on international trade, and the vast majority of maritime trade flows into and from the Pacific and Indian oceans. If the Chinese do not have maritime access, they face a profoundly serious economic problem.

Their major problem is the United States. The geography of the South and East China seas is ideal for a major navy imposing a blockade. China could counter a blockade, but it faces a massive U.S. force that, combined with this geography, makes it difficult. China sees the United States as both unpredictable and prone to imposing sanctions, usually restricting trade. A blockade would be an extreme action, but China cannot discount the possibility.

Therefore, it must gain access to global oceans on a reasonably secure basis, but its navy is not ready to provide that access. China’s only viable strategy is to gain access by reaching political accommodation with one of the nation-states that make up the archipelago stretching from Indonesia to Japan and use its waters as a relatively secure passage. The U.S. would then have to engage China inside the hostile territorial waters of that country, a much more difficult task.

The countries in this archipelago include Japan, Taiwan, the Philippines and Indonesia. Japan is not about to reach an accommodation with China, nor is Taiwan. Indonesia has become a major power in its own right and has a history of tension with China. Malaysia does not solve the problem of getting to the Pacific, as the lane is blocked by Indonesia and the Philippines. The Philippines, therefore, is the only practical option for China. The Philippines would provide an excellent exit from the South China Sea and a usable one from the East China Sea. It is in many ways the perfect solution if China could access it. 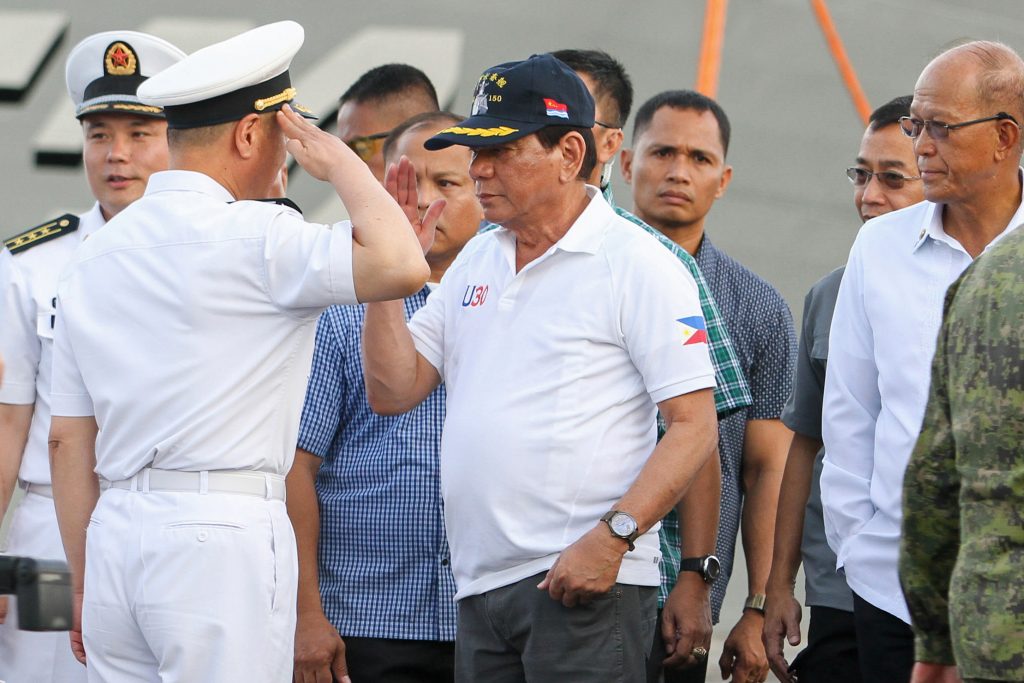 Philippine President Rodrigo Duterte, center, salutes a Chinese naval officer as Philippine Defense Secretary Delfin Lorenzana looks on during a visit to the guided-missile frigate Changchun at the Port of Davao on May 1, 2017. MANMAN DEJETO/AFP/Getty Images

Duterte was elected by a populace enraged by the status quo. This status quo includes the constant threat posed by drug dealers, the failure to evolve economically and the relationship with the United States. Duterte is deeply distrusted by the elite and seemingly admired by broader society, whom he has to satisfy. His means of satisfying that segment of society ranges from brutal attacks on alleged drug dealers to refusing to submit to the United States. From the outset of his government, Duterte has deliberately refused to abide by the niceties of domestic politics or foreign policies, cursing the United States in many ways.

The Chinese could not help but notice this and have engaged in a subtle courtship of Duterte. The latest episode in that courtship is Duterte opening up the possibility of joint naval exercises. If anything was going to trigger an American response, it was that because to a large extent maritime cooperation between China and the Philippines means the end of the U.S. maritime strategy in the Pacific.

It made perfect sense, therefore, for the U.S. president to invite Duterte to Washington. Duterte is said to be a thug. He is also the democratically elected president of a country that is of strategic importance to the United States – albeit one the U.S. felt comfortable ignoring in the past. Trump could have condemned Duterte. But if he did, and Duterte succumbed to Chinese approaches, the United States would face a significant problem with an equally repressive Chinese regime. Morally, it’s six of one, half a dozen of the other. Strategically, the Philippines is critical. Without it, U.S. strategy toward China loses one of its wheels.

It also is not surprising that shortly after Trump’s invitation via a phone call, Xi was on the line to Duterte. I don’t know what was said, but I have no doubt that Xi invited him to visit China again. Because of factors he had little to do with, Duterte has created a bargaining position between two great powers in which he holds many, if not all, of the cards. Anything he asks for is trivial compared to what is at stake for China and the United States.

There are indications that Duterte had this in mind all along, given his opening attacks on the U.S. and praise for China. Still, what he wants is unclear. He has risks. The elite are pro-American and the masses are not pro-Chinese, just anti-elite. A substantial number of Filipinos live in the United States, and remittances matter. The Chinese might not see his government as a stable platform on which to base their national strategy. The U.S. might decide that a choke point strategy is not viable given Chinese land-based missiles.

There are endless permutations in a maneuver where the stakes are so high. But in any case, for the moment, the Philippines is in an ideal situation. It is of great value to two great powers, either of which could float its economy with chump change and both of which need the Philippines. Neither of them knows what to make of the Philippine president. The Philippines found its sweet spot, but ultimately, the Chinese need it more, and that is a good reason to stay away from China. The needs of the U.S. permit room for the Philippines to maneuver. The Chinese embrace could become much too passionate for the Philippines’ fragile bones.

Real Clear World – In China, a Strategy Born of Weakness