Ethnic Chinese rebels in northern Myanmar are launching attacks against the Myanmar military. More interestingly, this armed group is allowed to openly raise funds in China. This unprecedented fundraising would be impossible without some degree of acquiescence by the Chinese state, and this acquiescence indicates a realignment of Chinese strategy towards its perpetually unstable southern neighbor.

Beijing now appears to be increasing its influence and support to non-state actors in Myanmar. In the long term, China wants to cement its hold over Myanmar and use the country’s strategic position to decrease Chinese reliance on sea-bound trade. A more proactive stance in the region also would help Beijing rally nationalism and distract its population from pressing domestic economic issues.

Beijing’s interest in Myanmar stems from the geographic constraints pertaining to major trade routes. The Chinese economy is hugely dependent on trade by sea. China imports more energy resources than any other country, and most of these resources must pass through bottlenecks in the Strait of Malacca and the disputed South China Sea.

Blocked by the U.S. and its allies in the Western Pacific, China sees involvement in Myanmar’s internal conflict as a means of achieving some degree of strategic depth in the region. Myanmar is the historic overland link between the Indian subcontinent, Southeast Asia and southwest China. 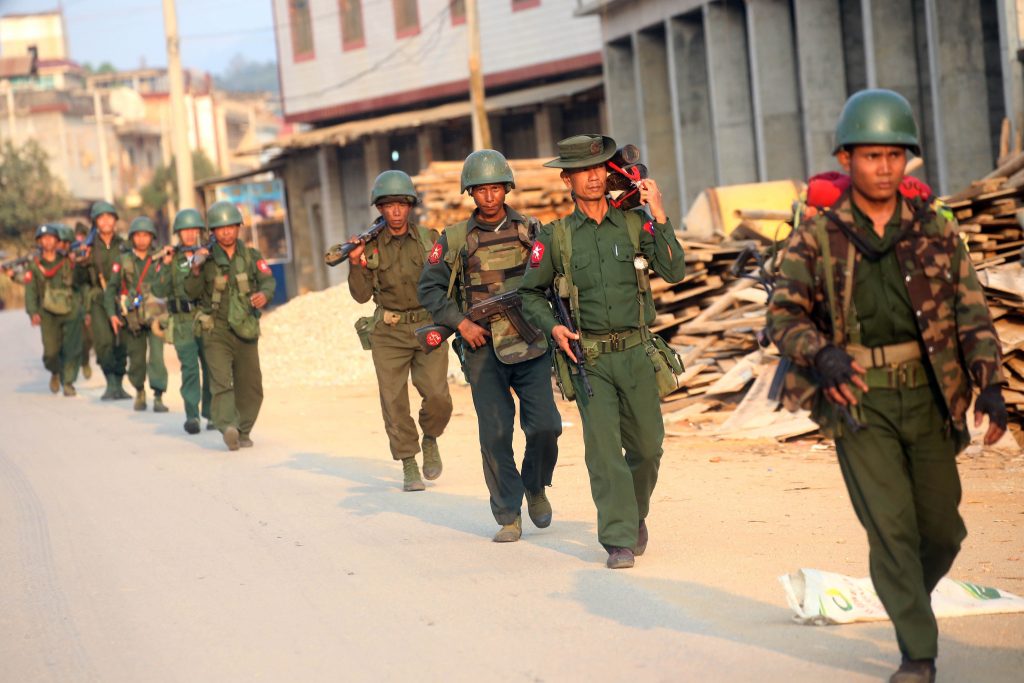 Myanmar soldiers patrol in Laukkai, the main city in the Kokang region of northern Myanmar, in Shan state, on Feb. 16, 2015. AFP/Getty Images

The rebel militias have launched their offensive in a crucial area. Fighting is concentrated near the town of Muse, at the main border crossing with China. Two key pipelines, operational since 2014, run through this area, bringing oil and gas from Myanmar’s Indian Ocean coast to southwest China. A paved highway links Muse to Mandalay, Myanmar’s second largest city in the lowlands along the Irrawaddy River, the economic and political heartland of the Bamar ethnic majority.

The recent round of fighting in Myanmar began a few days ago when four rebel groups launched coordinated attacks against government forces near the Chinese border. These groups include the Kokang Army, Kachin Independence Army, Arakan Army and Ta’ang National Liberation Army, who now have formed an alliance. According to the Myanmar Peace Monitor, these groups have roughly 18,000 fighters combined. Most larger rebel armies along the mountainous Sino-Myanmar border have signed peace accords with the central government within the last two years, but these four groups have rejected the process. Myanmar has fought various ethnic rebels nearly continuously since its independence from the U.K. in 1948.

All four factions currently launching attacks against the state are ethnic rebels, but the Kokang Army is unique in that it is made up primarily of ethnic Chinese. They are the remnants of Ming dynasty loyalists who fled China into what is now northern Myanmar over 400 years ago to set up a mini-state eventually incorporated into British Burma. The Kokang Army is the only currently active armed rebel group in the world composed primarily of ethnic Chinese. This gives it a huge advantage in directly selling its struggle to the Chinese population.

The Kokang Army, which controls mountainous territory along the Sino-Myanmar border, is now openly raising money and propagandizing on Chinese social media. These activities have the apparent acquiescence of Chinese state censors. The Kokang Army also has bank accounts for soliciting donations in southwestern China’s Yunnan province, just across the border from Myanmar. According to the Kokang Army’s Chinese-language websites and social media, sympathetic Chinese citizens from across the country have donated to their cause. So far, the numbers are not huge: The group claims to have raised roughly $20,000 since June 2016.

Beijing has maintained relations with various ethnic rebels in the mountainous regions of Myanmar near the Chinese border, where groups operate as de facto states. However, it is entirely unprecedented for a rebel group waging war against a neighboring government to be allowed to openly raise money from Chinese citizens.

The Chinese government has previously pledged non-interference in Myanmar’s entrenched ethnic conflicts, although it has hosted negotiations between various groups of ethnic rebels and the central government. Myanmar government spokespeople have previously accused Beijing of showing favoritism to the ethnic rebels in these talks. Beijing expresses discontent with the occasional spillover of cross-border violence and refugee inflows from the perpetually restive borderlands.

Chinese aid to armed groups in Myanmar is significant because it confirms our expectations of China’s behavior in its near abroad going forward. The U.S. Navy and the East Asian archipelago block China in the Western Pacific. On most of China’s land borders, the People’s Liberation Army is limited by terrain from conducting large-scale military operations. This means that China’s best option for enhancing its position is to get involved in its neighbors’ domestic politics. This is now coming to fruition in Myanmar, which is particularly vulnerable due to its plethora of armed non-state actors. As nationalism strengthens globally, Beijing will increasingly portray itself as the protector of ethnic Chinese worldwide. Tellingly, Chinese state-run media has noted that many Chinese are calling online for Beijing to support the Kokang Army.

China has made great investments in its area-denial capabilities, but Beijing cannot hope to challenge U.S. Naval dominance at least for many decades. It is also constrained by Japanese maritime forces in the event of a conflict in the Western Pacific. Control over Myanmar would allow for direct overland access to the Indian Ocean. Chinese investments in ports and overland transport routes in Pakistan are largely driven by the same imperatives.

Although China has generally enjoyed amicable ties with the current Myanmar government and has deep economic influence over the country, that influence has declined in recent years. During the decades of open military rule, China was Myanmar’s main economic and political partner. However, with recent liberalization and the attendant lifting of economic sanctions, Myanmar is increasingly reaching out to the U.S. and India. Influence over ethnic rebels in Myanmar’s north allows China to hedge its bets in the country and place pressure on the government.

The Chinese state is not so incompetent as to let neighboring rebels raise funds in its territory without its knowledge. This is therefore an intentional move that aligns with China’s long-term imperative of increasing leverage over its neighbors by any means necessary, and its need for strategic depth away from the Western Pacific.