British Prime Minister Theresa May has signed a letter officially invoking Article 50 to begin the process of the United Kingdom’s withdrawal from the European Union. By the time this Reality Check is published, that letter will have been delivered to European Council President Donald Tusk. Reportedly, the European Council will then send guidelines about upcoming negotiations between the U.K. and the EU to the 27 remaining EU member states within 48 hours. A version of those guidelines will be discussed and approved in Brussels on April 29. Almost a year has passed since 52 percent of British voters opted to leave the EU, but the process for separation has now been initiated. The next issue is how to understand what will happen during the two years of U.K.-EU negotiations that lie ahead.

Three important observations should be kept in mind now that the British government has invoked Article 50. First, the British economy, contrary to most mainstream expectations, did not collapse because of Brexit, nor will it. Second, the U.K. has significant leverage in upcoming negotiations with the EU, because the EU needs a relationship with the U.K. more than the U.K. needs the EU. Third, the formal triggering of Article 50 opens a Pandora’s box of problems in the United Kingdom itself. 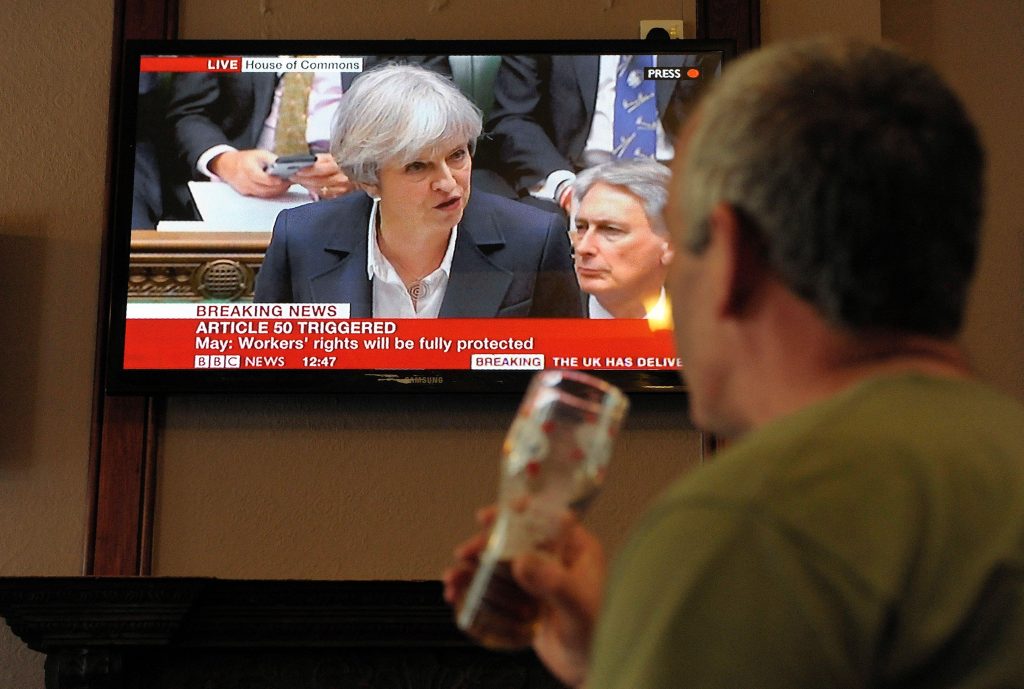 A man and a pint take in the news at The Black Bull in Edinburgh, Scotland, as British Prime Minister Theresa May speaks to Parliament after triggering Article 50 of the Lisbon Treaty to begin the process of Britain’s withdrawal from the European Union, on March 29, 2017. ANDY BUCHANAN/AFP/Getty Images

The anticipated demise of the U.K.’s economy post-Brexit turned out to be greatly exaggerated. There was no shortage of doomsday forecasts circulating in the lead-up to British citizens voting last June. The most notable was a detailed report by the British Chancellor of the Exchequer delivered to Parliament in May 2016, which included a laundry list of potentially disastrous consequences from a vote to leave. This report made it explicitly clear that a vote to leave would cause “an immediate and profound economic shock,” pushing the U.K. into a recession and leading to a sharp rise in unemployment. It is true that in the weeks after Brexit the British pound lost 10 percent of its value. But none of the doom forecast by the government of former Prime Minister David Cameron and other sources materialized. In fact, the U.K.’s GDP growth in the fourth quarter of 2016 was 0.7 percent, which exceeded expectations and was higher than the three previous quarters.

None of this is to say that Britain’s Brexit experience will be without negative consequences – there will be some. But as we said a month before Brexit, those challenges will be surmountable. In many ways, Britain’s trade position was already changing even before the Brexit referendum (a Deep Dive published later this afternoon will explore this issue in-depth). The histrionics leading up to the vote had less to do with reality than attempting to scare British voters into choosing to remain. Not only did these overstatements fail to sway British voters, but they also had the effect of drawing even more attention to Britain’s “carrying on” after Brexit. Other countries reconsidering their place in the EU not only see a member leaving the union, but also one that faces few of the negative effects that many asserted without sufficient evidence. 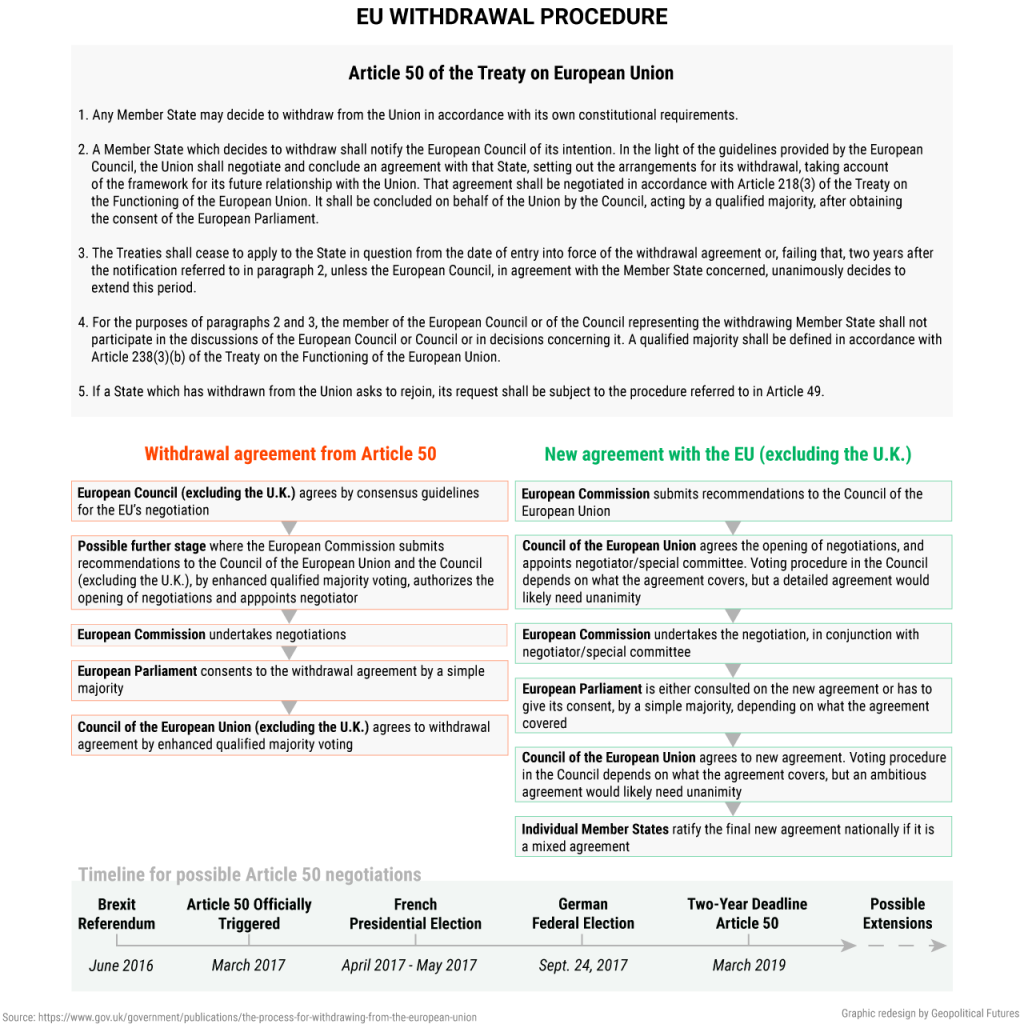 In 2015, about 32 percent of British exports went to the European Union. About 10 percent of British exports went to Germany. Neither of those figures is insignificant. But two things must be kept in mind. First, exports make up about 27 percent of the U.K.’s GDP. Second, the largest single export destination for Britain that year was the United States, at 15 percent. Britain also can look to the former Commonwealth countries to increase trade if necessary. By comparison, exports make up just under 47 percent of Germany’s GDP. Furthermore, Germany has relied on increased trade with the U.S. and the U.K. to offset sluggish growth in the EU and declines with China.

What all this means is that the EU, and Germany in particular, need a cooperative trading relationship with the U.K. as much – if not more ­– than the U.K. needs that relationship with the EU. This is not a zero-sum game in which Germany can bring the U.K. to its knees and thereby scare other EU countries into avoiding a reconsideration of their own relationships with the EU. The optics of the EU attempting to punish the U.K. for exercising its legal right to withdraw would not play well. The EU is already being ignored by many of its member states, including France on budget deficit rules, Italy on bank bailout rules, and Hungary and Poland on migration rules. The negotiation will be tough, and both sides will likely have to make compromises. Trade will proceed – perhaps not exactly as before, but without systemic collapse on either side.

The real and most dangerous consequence of all this for the U.K. has less to do with the EU than with the U.K.’s future as a united kingdom. Scotland’s parliament has already voted in favor of another referendum on Scottish independence. Similar overtones are resonating out of Northern Ireland. Many dismiss Scottish independence as fantasy for two key reasons, and there is merit in this diagnosis. First, except for a brief period immediately after Brexit, polls on Scottish independence have remained slightly opposed to independence, hovering at 55-45 percent against. Polls must be taken with a grain of salt, even accepting that referendum results in 2014 are a reliable data point. Still, that opinion polls have remained consistent is notable. Second, the economic viability of an independent Scotland is unclear at best. This is especially true since the EU has made it clear it would not welcome Scotland with open arms, fearing the precedent it would set for other breakaway regions in EU member states.

Still, dismissing these desires in Scotland or even in Northern Ireland misses the point. It means, at least in Scotland’s case, that almost half of the population does want independence. It may not be enough to win a referendum, but it is still a sizable share of the population. It also must be said that countries do not always act entirely in their best interest. If forecasting geopolitics was as simple as identifying a few key variables of economic dependence, a company like Geopolitical Futures would quickly go out of business. Sometimes feelings of national pride are more important in understanding how a state behaves than an analysis of how it can balance its checkbook.

Brexit has renewed an old question: What is the United Kingdom? The answer is a group of different nations whose fates can theoretically be separated by choice. The fact that they have been joined together for centuries is less remarkable than the fact that even after centuries the feelings of national difference remain potent. In a world where multinational institutions are under general stress, the potential for a change of opinion cannot be ruled out. After all, the Cameron government thought it had the Brexit vote in the bag. The consequences of overconfidence when the outcome is uncertain can be unexpected. This is an issue not just for the U.K., but also for other states in Europe, such as Spain or even Germany. The U.K. may be a forerunner in more than one way.

European institutions move at a glacial pace. If one year of hand-wringing and two years of negotiations are all it takes to figure out the precise logistics of Britain’s exit from the EU, it will be a relatively speedy affair compared to other European decisions. The potential for it to drag on much longer also should be considered. At minimum, another two years can be expected of operatic melodrama surrounding the precise terms of Britain’s exit. Perspective can be retained by remembering that the British economy will keep calm and carry on. The EU does not have the legal basis to punish Britain, nor does it have the power to force Britain into any trade deals. Lurking behind all of this is the continued reorganization of Europe and the world around national interests.