The Munich Security Conference is a place where senior leaders make speeches and hold meetings with each other. Sometimes, the meetings are merely formal, sometimes they are substantive. It is not always easy to figure out which is which. This year’s meeting was held last week, and everyone was focused on the United States delegation. The delegation was headed by Vice President Mike Pence and Secretary of Defense James Mattis, who were accompanied by aides and less prominent figures. The focus on this delegation was reasonable. The world wants to know what U.S. foreign policy will look like. Mattis and Pence, at the end of the day, emphasized continuity. This always soothes diplomats, for a reason that escapes me. No matter how incoherent the situation, the promise that the incoherence will continue unabated makes you a statesman. Pence and Mattis played the role well, effectively buying time while President Donald Trump’s administration defines U.S. foreign policy.

One thing that emerged from the meeting and other events in the last few days is a seeming shift in Turkish policy toward the U.S. Mattis met Turkish Defense Minister Fikri Işık in Brussels on Feb. 16 during the NATO defense ministers’ conference and assured him of U.S. support as a strategic partner in the campaign against the Islamic State in Syria. On Feb. 18, Pence met with Turkish Prime Minister Binali Yildirim and Turkey’s National Intelligence Organization chief Hakan Fidan. A day after the meetings, the Turkish foreign minister said in Munich that Turkey has asked for more U.S. Special Forces in Syria. He added that U.S. Chairman of the Joint Chiefs of Staff Gen. Joseph Dunford was in Ankara last week and discussed “technical issues” related to a potential deployment. 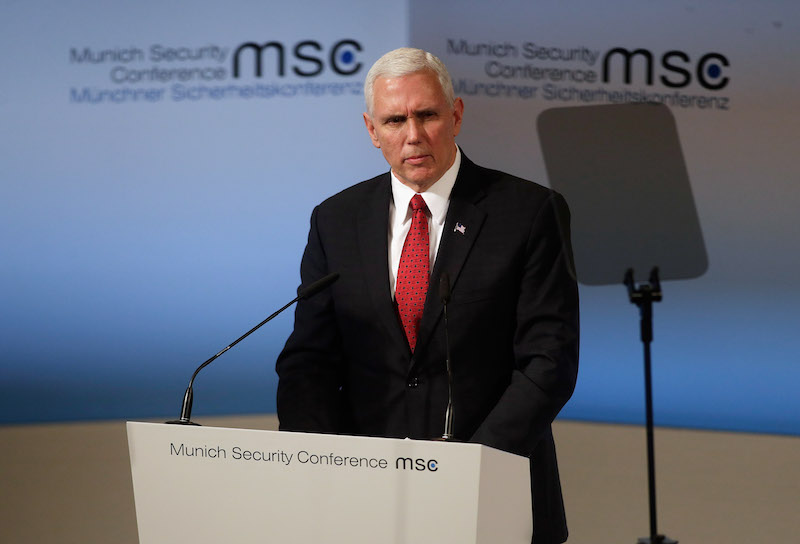 U.S. Vice President Mike Pence delivers a speech at the 2017 Munich Security Conference on Feb. 18, 2017 in Munich, Germany. The 2017 Munich Security Conference, which brings together leading government figures from across the globe to discuss issues of common security concern, is taking place in the wake of the ascendence of Donald Trump to the U.S. presidency and the appointment of a new U.S. government cabinet. Johannes Simon/Getty Images

The Turks are involved in a three-player game in the region. This includes the United States, a Turkish ally since the end of World War II that maintains via NATO a very large and important air base in Incirlik, Turkey. That base is important to maintain air operations over Iraq and Syria, monitor Iran, and operate in the Black Sea and the Caucasus to deal with potential Russian operations. This is one of those military bases the U.S. has access to that is of actual strategic value.

The logic of the situation sustained since World War II was that Turkey would side with the U.S. against Russia, thereby blocking its aspirations. But these days, Russia is too weak to imagine the seizure of the Bosporus. Nevertheless, the Russians have other options for irritating the Turks. The decision to send aircraft to protect Bashar al-Assad’s regime in Syria was one way to accomplish this. The Turks wanted Assad to fall due to prior atrocities against the Turkish community in Syria. The Russians acted to save him. In the course of this intervention, the Turks shot down a Russian plane that slightly entered Turkish airspace. This sent Turkish-Russian relations to a near-war condition. Then, the attempted coup occurred, the Turks blamed Gülen and indirectly the Americans, and relations with Russia suddenly improved.

The Turks were maneuvering themselves into an enviable position, using their hostility to both Russia and the United States. Turkey was important to both. The U.S. needed Incirlik, and it also wanted Turkish help in managing the Arab world. The Russians needed to increase their strength to block American ambitions in Ukraine and related regions, and Turkey had emerged as a valuable asset. Russia and Turkey together would pose a challenge to the United States.

Turkey was in the sweet position of being courted by two countries it formally despised – it hoped to extract concessions from both in exchange for keeping Turkey from moving into the other’s camp. It was a very attractive game, and contrary to media coverage that portrayed Erdoğan as irrational, he actually was able to balance Russia and the United States against each other.

Suddenly, indications suggested that the Turks, in spite or because of Russian success in Syria, were tilting toward the United States. Reports indicate that the United States is considering sending not only Special Forces but also regular Army forces and Marines to engage and destroy IS. The Turks have actually expressed the hope that the U.S. will do so. They have at no point interfered with U.S. operations at Incirlik. They are asking for an end to U.S. support for Kurds in Syria, and they have not yet said what they would do if the U.S. intervenes. But the sense is that the discussion over Syria is reaching a critical stage, that the Turks are now eager for intervention and that this agreement – with many concessions by the U.S. – would return U.S.-Turkish relations to their status prior to the attempted coup.

One likely reason for this is that the Turks, having played with the Russians, have come to realize Russia’s limited value as an ally. In the end, Russian military capability is limited, and its economy is in trouble. As important, the situation to Turkey’s south is increasingly dangerous, and Turkey is extremely wary of the Iranians. The Turks share interests with the United States, and the U.S. is far more able to deliver on promises. As for the United States, if it decides to engage IS, it will need allies, and Turkey is by far the most significant country in the region.

One point to note is that Turkey is now playing in a different league than it was 20 or even 10 years ago. It deals with the Russians as an equal and the United States as more powerful but potentially dependent on Turkey. The evolution of Turkey to the point of a major – perhaps the major – regional power is marked. But regardless of how powerful Turkey becomes, it requires allies, and it seems to us that the straws in the wind point to an accommodation with the United States.

Modeling the US Reaction to the Coronavirus