Two important votes occurred in European countries over the weekend. In Austria, a far-right presidential candidate lost by a margin of 7.2 percent (53.6 percent to 46.4 percent). That is hardly a landslide, but it still was a defeat for nationalists in Vienna, who had hoped to take the presidency. In Italy, voters said “No” to a referendum on government reforms. That vote was more broadly viewed as a referendum on Prime Minister Matteo Renzi’s administration, and he has since tendered his resignation.

The result of Italy’s referendum means three things. First, the slow devolution of the European Union rumbles on. Second, Italy has declared itself in open revolt both internally and against the EU, and this is a challenge not just for the EU, but for Germany in particular. Third, this is the beginning of a major political shift in the third largest economy in the eurozone. Italy will hold elections in 2017, and it is unclear whether the political establishment will retain control, or whether parties like the Five Star Movement and the Northern League, which advocate nationalist economic policies and a re-examination of Italy’s relationship with the EU, will seize power. The damage already has been done, and nationalist sentiment won’t go away soon. It will continue to shape Italian politics no matter who is in power. It is clear Italy will not move forward in the same way it has before.

The result of the referendum is the latest in the increasing power of nationalist politics in Europe. Voters rejected Renzi’s proposal for what he hoped would stabilize the Italian government by reducing the power and size of the Senate and transferring prerogatives from regional administrations to the central government in Rome. The referendum’s rejection was so resounding that the government had anticipated it ahead of the vote and had already begun planning for the aftermath. By promising to resign if the referendum failed, and therefore linking it to his career as prime minister, Renzi created a significant opportunity for nationalist parties in Italy to make their influence felt. The anti-system Five Star Movement and the Northern League turned the campaign against proposed reforms into a full-fledged rejection of the Renzi government. And it worked. Unlike Brexit or Donald Trump’s victory in the U.S., polls correctly predicted Italy’s qualitative outcome of a “no” vote. Still, the margin was bigger than polls had predicted, as a large number of Italian voters turned out to show their contempt for the current political establishment. Members of the establishment erroneously believed that even if the reform proposals failed, the political system would remain intact, leaving members of the establishment in control. But the opposite is happening. 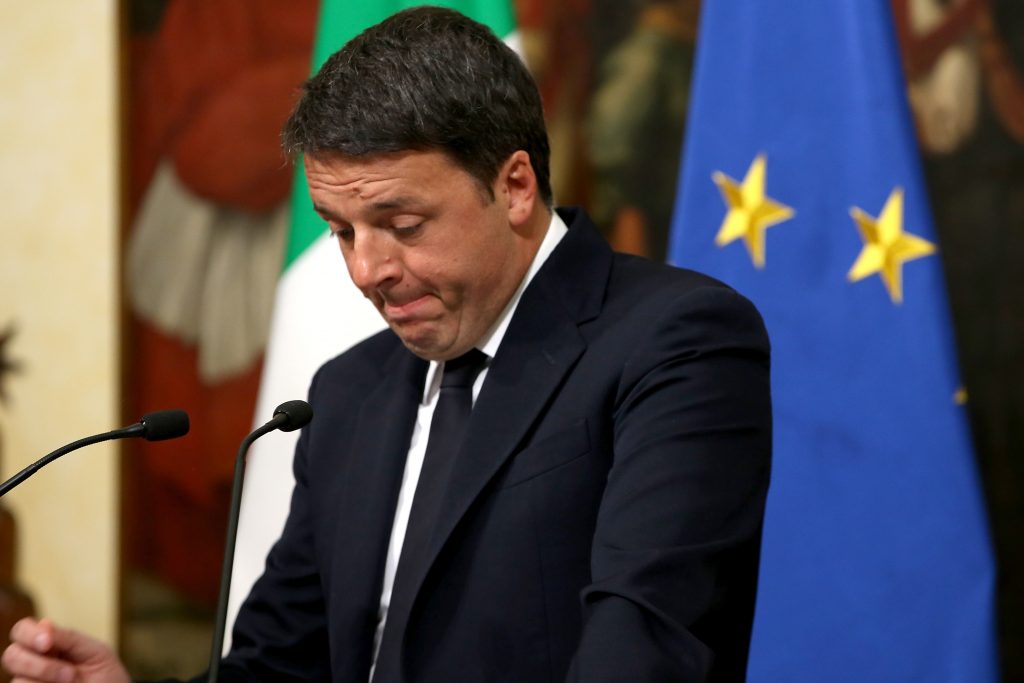 Italy’s Prime Minister Matteo Renzi delivers a speech after results of a referendum on constitutional reforms at Palazzo Chigi on Dec. 5, 2016 in Rome. Franco Origlia/Getty Images

Italy is in the midst of a banking crisis. The proposed reforms to simplify decision-making also attempted to fix the banking sector’s problems in a timely manner to avoid further consequences. Keeping investor sentiment strong is crucial for Italy’s banking sector. Although the amount of non-performing loans (NPLs) hasn’t increased in the last year, and banks have started a recapitalization process to further consolidate in an effort to cut costs, the banking sector remains fragile. Banca Monte dei Paschi di Siena, the country’s weakest major lender, is a test case for Italy, as it is the first state-backed campaign to steady the banking sector and attempt to clean up the Italian banks’ 360 billion euros ($387 billion) of NPLs. While a debt-to-equity swap that ended last Friday managed to raise 1 billion euros of the 5 billion needed, a share sale to raise more capital likely won’t be launched soon.

The banking woes are not simply an Italian problem. Italy is the third largest economy in the eurozone, and both Germany and France are exposed to troubles in the Italian banking sector. The EU and Italy have been negotiating solutions for over two years, with few tangible results. Tensions over negotiations sometimes surfaced throughout 2016 between Renzi and German Chancellor Angela Merkel. The referendum was not only about the Italian people’s desire for change at the top of their government, it also was a message that Italy won’t accept German methods or directives from Brussels on how to fix Italy’s financial and economic problems. The EU and Italy have been playing a game of cat and mouse over the issue of NPLs, but the result of the referendum is a clear signal that Italians want a government that will make decisions in terms of what is best for Rome, rather then accepting sacrifices for the greater good of the German bloc and the eurozone as a whole.

Anticipating Sunday’s results, the Italian government moved forward in negotiating with the European Commission on the country’s next steps. Corriere della Sera reported last week that Italy had already filed a request to launch a public recapitalization of Banca Monte dei Paschi as early as next week. At the same time, the media also cited sources saying that financial market intervention from the European Central Bank would be part of a short-term reaction to the referendum’s rejection. Other reports have said the EU would be flexible on rules applied to a potential Monte dei Paschi bailout to avoid damage to the entire Italian banking system. All of these actions are aimed at preventing investor panic. So far, investors haven’t panicked: While shares of Italian banks were down as much as 7 to 8 percent at the time of this writing, there is no evidence of massive shock to investor confidence.

The Italian banking crisis has become a crisis for Italy’s political establishment. While the establishment tries to save face by pointing out the referendum’s result was expected, and that it has taken steps to mitigate potential fallout, the referendum undermines the establishment’s legitimacy both to Italians and those in Brussels who are negotiating with the government. All eyes should now be on the Five Star Movement, which along with other parties has advocated a non-binding referendum on whether Italy should remain in the eurozone. The Northern League also supports such a referendum, and Forza Italia, a populist center-right party, may support it given the party’s criticism of the EU’s common currency.

A caretaker government will now take the helm from Renzi. Flexible rules for a Monte dei Paschi bailout will be decided with the European Commission. Another Band-Aid solution will be successfully administered for the banking sector. But mistrust in the Italian economy will increase, driving higher interest rates on sovereign debt. The vote against Renzi’s government was partly caused by social problems, including high unemployment following the 2008 economic crisis. Austerity measures and slow recovery have caused increasing distance between the public and the traditional political elite, making room for anti-establishment, populist and nationalistic parties to appear on the political scene.

Renzi’s resignation will lead to early elections next year. It is possible the political establishment will lose that vote as well, and as a result, the Five Star Movement could take power. That scenario, if not probable then at least highly possible, would change the way Italian domestic politics function and the nature of Italian relationships with Brussels and Berlin.

Investors don’t lose confidence when governments change, but they do lose trust when systems change and when different government rules could be implemented. Sometimes this happens overnight and markets react the next day. Sometimes it takes longer. This is currently happening in Italy. The establishment’s moves are meant to reassure investors. That tactic will work for several weeks, and perhaps months. But Renzi leaving is not the end of political upheaval in Italy – it is the beginning. The shockwaves will be strongly felt in Berlin and throughout the eurozone.