The CIA’s report on the Russian attempt to influence the American presidential election has been issued. The report asserts that the Russians stole emails belonging to the Democratic National Committee (DNC) and John Podesta to embarrass Hillary Clinton and cause her defeat. In addition, it says that the Russians engaged in propaganda and disinformation and had access to several state and local electoral boards, but did not tamper with the votes. Also according to the report, the Russians favored Donald Trump for president.

The report may or may not create a controversy, but if it does, it has the potential to cause significant turbulence in the American system. It is useful to look at it from that perspective, as it reveals some of the deeper vulnerabilities of the American political system at this moment. 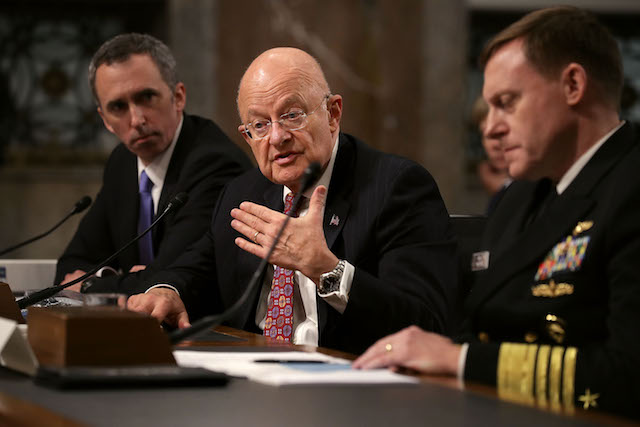 From left to right, Defense Undersecretary for Intelligence Marcel Lettre, Director of National Intelligence James Clapper and United States Cyber Command and National Security Agency Director Adm. Michael Rogers testify before the Senate Armed Services Committee in the Dirksen Senate Office Building on Capitol Hill on Jan.5, 2017. The intelligence chiefs testified to the committee about cyber threats to the U.S. and fielded questions about effects of Russian government hacking on the 2016 presidential election. Somodevilla/Getty Images

The report is potentially politically explosive in a number of ways. First, implicit in the CIA assertions is the idea that, except for Russian involvement, Trump would not be president. The CIA carefully avoids making this conclusion, but those who regard Trump as an inappropriate president will likely use this to further delegitimize him. His opponents already see him as illegitimate partly because he lost the popular vote and won the Electoral College only by narrow margins in the Rust Belt.

The report could create a constitutional crisis. There is no constitutional provision for overriding a presidential election. The president can be impeached, but nothing in the CIA report implies that Trump was guilty of any high crime or misdemeanor necessary for impeachment. The fact that Trump had kind words for Russian President Vladimir Putin and wanted better relations with Russia indicates nothing. President Barack Obama wanted better relations in the Islamic world and sometimes spoke of adversaries in ways others disapproved of. However, the president not only has the right but the duty to frame his policies as he thinks best.

Nevertheless, Trump’s opponents will likely use the report to attempt to delegitimize the election and seek to block Trump’s foreign policy, particularly on Russia. It was undoubtedly for this reason that Trump did not want the report made public. It might weaken his presidency and even create a movement to use this as the basis for impeachment, regardless of whether there is any evidence of wrongdoing on his part. That is a far reach, but not absurd.

As this develops, another force might arise. Some will raise the question of why this report was released with such urgency. Some will answer this question by saying that the report was too important to be kept from the public. But Trump’s supporters may claim that the release was politically motivated. Trump’s National Security Adviser Michael Flynn has long distrusted the CIA’s performance from his days in Afghanistan, and the Trump transition team has openly discussed restructuring and downsizing the CIA . The charge will be made that the CIA released the report to cripple Trump, and make it impossible for him to reform the agency because it will appear like revenge.

The more extreme charge will be that Obama ordered the CIA to release this report to weaken Trump politically. Obama wanted to control the content of the report and the timing of the its release, so that it would be made public while he is still in office. Obama is concerned with preserving his legacy, particularly with regards to health care, and he wants to weaken Trump’s authority.

The counter to both those arguments is that a foreign and adversarial power intruded into an American election. It was on the whole a clumsy intervention. The revelations from the emails were shocking mostly to those who wanted to be shocked, and for all the panic over fake news, it is nothing new. All countries use propaganda to shape public opinion in adversarial countries. The report had to be released quickly to let the Russians know we were aware of their activities, and perhaps to inoculate Americans from further attempts.

In the end, Trump’s enemies will charge him with being an illegitimate president, and in extremis, will say that he had made some sort of deal with the Russians before the election. The CIA and Obama will be accused of trying to cripple Trump’s presidency and undermine a legitimate election. Regardless of the CIA’s intent, the report could destabilize the United States, which is what Russia wanted in the first place.

The Russians may have wanted Trump to win the election, but it is extremely unlikely that they had a significant effect or that they expected to succeed. The revelations in the emails were either trivial or already well known. They revealed that DNC head Debbie Wasserman Schultz wanted to block Bernie Sanders from winning the Democratic nomination. That was neither a surprise nor did he fail to get the nomination because of her. He failed to get the nomination because he got fewer votes than Clinton. It also was revealed that donors to the Clinton Foundation could get meetings with the secretary of state. But were that the greatest corruption in Washington, it would be a very honest city. The important revelations were already known, and those that were unknown were unimportant. The people who were impressed by these leaks for the most part opposed Clinton anyway.

I don’t think that the Russians expected to get Trump elected. They wanted to intrude on the election and make sure the public knew they intruded. The Russian goal was to generate uncertainty about the election and, if possible, destabilize the U.S. as a result.

The Russians’ issues with the U.S. predated the election campaign. The Russians have long charged that the U.S. tries to influence elections in former Soviet Union states. The U.S.’ means for doing this is to underwrite political groups, frequently acting as neutral human rights advocates. These groups help organize opposition to these countries’ governments, and in Ukraine, helped bring down the legitimately elected government. The Russians also charge that the U.S. government, through various agencies, openly and covertly encourage unrest in Russia.

If the Russians did the things the CIA claims, getting even for what the Russians see as American attempts to influence politics and increase instability in former Soviet Union states was their primary purpose. The Russians are moving deeper into economic and social problems and as such will become increasingly vulnerable. By demonstrating very publicly that they could return the favor, they signaled the U.S. to back off. In this sense, the CIA report was precisely what the Russians were hoping for. They wanted their attempt to be detected, and they wanted to be seen interfering with the election, but their intent was not to help any candidate get elected. It was an added bonus to get rid of Clinton, whom they loathed, and to see Trump, who seemed more flexible, win the election.

The CIA has now completed what the Russians started. They set the stage for a particularly vicious and long-term confrontation between factions. The problem with the CIA report is that it is only assertions. Unfortunately, the CIA’s record is not sterling. It was wrong about weapons of mass destruction in Iraq. It failed to forecast the Sunni rising in Iraq or the Islamic State’s assault on Mosul. It failed to uncover the plans for 9/11 or to predict Saddam Hussein’s invasion of Kuwait. It also failed to forecast the Korean War and lots of things in between. The CIA simply doesn’t have the credibility to assert something this critical.

Senators and congressmen who have been briefed on this all came away saying they were convinced about the CIA’s conclusions. If so, they were provided information that was not made public. I understand the CIA’s unwillingness to compromise sources and methods, but at times it has used this as a way to cover shoddy intelligence. The intended audience in this issue is not the president or secretary of defense. It is the American public. The American public, Trump supporters included, must be persuaded that the CIA report is neither political nor shoddy. The information it has shown to Congress – in addition to the report that was declassified last week – was provided knowing it will likely leak, so it is no longer assumed to be classified.

The concerns that flow from the report are legitimate. Were Trump and the Russians working together? Was this report an attempt by Obama and the CIA to cripple Trump? The CIA cannot simply issue assertions. It must provide evidence. If it doesn’t, then it is completing Putin’s work for him by turning a fairly clumsy and very public demonstration of what it feels like to have foreigners intervene in your politics into a significant destabilization of the American political system.

In a country racked with distrust of institutions, issuing this report without some proof that the report is true, both in what it says and what it doesn’t say, is problematic. What it doesn’t say was that Trump was involved, or that Obama ordered the CIA investigation for political reasons. Getting these issues clear is as important as finding out how the hacks happened.