At 2 a.m. local time on Monday, Iraqi Prime Minister Haider al-Abadi appeared on state television and declared that the battle for Mosul has begun. Flanked by military officers, al-Abadi told the estimated 700,000 civilians left in Mosul, “God willing soon we will meet on Mosul land to celebrate liberation and your salvation, and we will all live, once again, with all our religions and sects, together, with love, equality and cooperation.” It gives me no pleasure to ask a depressing but necessary question: when exactly did people of all religions and sects in Iraq live together with love, equality and cooperation?

Iraq declared its independence in 1932. What followed was decades of military coups, internal upheavals, wars between whoever was ruling in Baghdad and the Kurds, and the rise of the Baath Party. All of this culminated in the brutal rule of Saddam Hussein, who officially came to power in 1979. Saddam oversaw an eight-year war with Iran in which over a million people died. He ruthlessly suppressed Iraqi Shiites, Kurds and political rivals. He invaded Kuwait, only to be beaten back by the United States, and was finally deposed by the U.S. in 2003. Meanwhile, the Kurds fought a war among themselves from 1994 to 1997. For all of this conflict, the period of Saddam’s rule was arguably the most stable in Iraq’s history, which tells you a great deal. 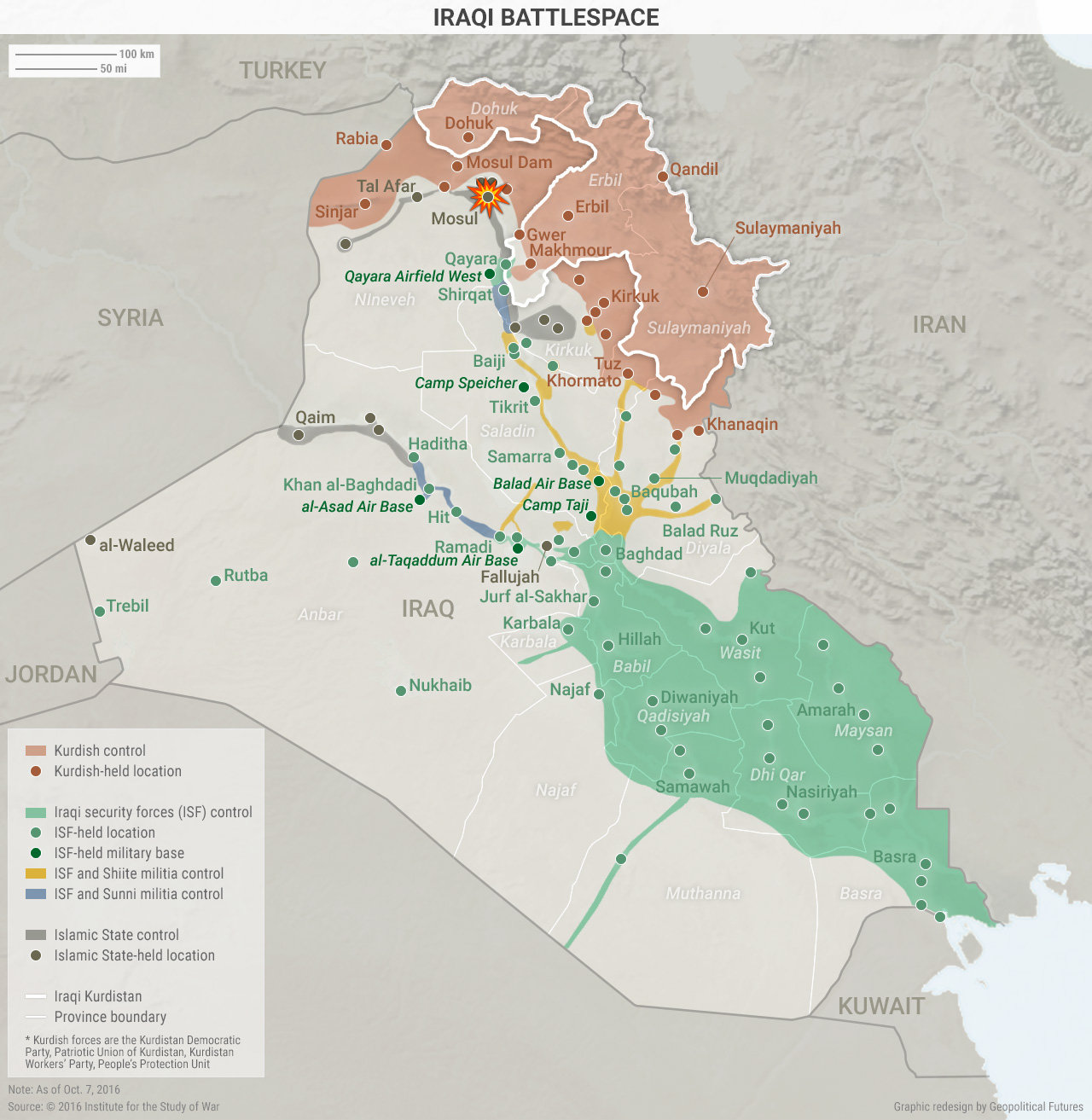 The United States believed it could change all this. It decided to do so by creating a liberal democracy in Iraq and helping Iraqis craft a constitution. The preamble to the constitution reads, “We, the people of Iraq…[will] respect the rules of law [and will] establish justice and equality to cast aside the politics of aggression.” In a 2005 referendum, 79 percent of Iraqi voters approved the constitution. That sounds like a one-sided vote. The problem was that the voting broke down on sectarian lines. Iraqi Shiites and Iraqi Kurds overwhelmingly voted for the constitution. But Iraqi Sunnis voted overwhelmingly against it. For example, in Nineveh province, which is majority Sunni and includes Mosul, 55 percent of voters rejected the constitution. In neighboring Anbar province, which is mostly Sunni, 96 percent voted against it. What followed was the Anbar Awakening, more war and the birth of the Islamic State of Iraq.

One CNN anchor said yesterday that it seemed great that all of Iraq’s various tribal and religious elements were coming together to get rid of the Islamic State. The retired U.S. brigadier general she was interviewing nodded approvingly and said indeed it was. On the surface, this appears true. Iraqi Security Forces (ISF) don’t have the manpower to do the job alone, so they are relying on Kurdish peshmerga fighters to help them surround the city from the northeast. Behind the ISF are Iran-backed Shiite militias who have helped the ISF push IS back from its positions in Ramadi and other parts of Iraq. Turkey has been training militias in nearby Bashiqa so that they might contribute to the attack on the Islamic State. U.S. troops are on the ground too, in an advisory role, the U.S. insists. Everyone seems ready to lend a hand.

Unfortunately, that is not what is actually going on. Al-Abadi says that only the ISF will enter Mosul. But the Iraqi Kurds have already shown that they will take advantage of whatever situation they are confronted with and will seize territory if they have the opportunity. The Shiite militias have clashed with local populations in Sunni areas before and they will want to get in on the fighting as well, which will inevitably lead to sectarian clashes. Al-Abadi has told Turkey repeatedly to stop violating Iraqi sovereignty and withdraw from Iraq. Turkish President Recep Tayyip Erdoğan isn’t just ignoring al-Abadi, he’s openly defying him. Erdoğan was quoted in Hurriyet yesterday saying, “Why can’t we enter [Mosul]? No one should expect us to leave.” Are the ISF ready to attack Shiite militias if they start treating Sunni Arabs in or around Mosul harshly, or to push back against the peshmerga? What if Turkey-backed Turkmen militias decide to enter the fray to protect ethnic Turkmens currently besieged in Mosul?

As we have noted numerous times, the battle for Mosul is going to be incredibly bloody. This is urban warfare, and it will be a humanitarian disaster by the time the fight is over. Many civilians will suffer and die. No doubt the Islamic State’s rule of Mosul has been harsh, but it should also be remembered that there was very little resistance to the Islamic State’s ascendance in Mosul, and it could not have governed the city as long as it has without some support from the local population. The ISF and their coalition of forces may very well end up defeating the Islamic State, but IS will make sure the price of “victory” will be the destruction of what is left of the city. The result of the “victory” is more likely to be a larger sectarian competition for the spoils rather than peace, love and harmony between the various combatants. 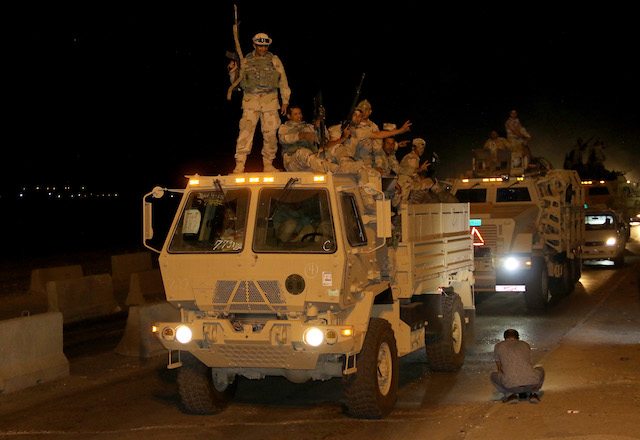 Iraqi army soldiers drive through the city of Kirkuk on Oct. 10, 2016 as they head to the frontline in preparation for the battle to retake the city of Mosul. The battle could unleash a major humanitarian crisis, potentially pushing hundreds of thousands to flee their homes as winter sets in. Mosul, the country’s second city, was seized by the Islamic State group in 2014 and is now the last major population centre still held by the jihadists. MARWAN IBRAHIM/AFP/Getty Images

Amid all of this, in a development that probably went unnoticed by most, Iraq’s Supreme Court overturned a decision last week made by al-Abadi in 2015 to eliminate three vice presidential posts. The posts were mostly ceremonial and were held by representatives of Iraq’s different religious and ethnic groups. Al-Abadi got rid of them because he felt they were exacerbating sectarianism and because they were an easy scapegoat for Iraq’s economic problems. Canning three fat-cat officials used to eating well and getting their own private chauffeurs on taxpayers’ money helped calm protests against power shortages and corruption that brought tens of thousands of Iraqis into the streets. The problem is that, just as President Barack Obama couldn’t simply fire Vice President Joe Biden, al-Abadi cannot by himself change the Iraqi constitution. For that, a referendum must be held. So the court is doing exactly what it should by design – trying to enforce the rule of law. So far, al-Abadi has given no indication he intends to follow suit.

The U.S. thought it was building a liberal democracy in Iraq. It helped Iraq draft a constitution, and Iraq even has a functioning Supreme Court. But the U.S. forgot that liberal democracy is not a light switch you can simply flip on at a moment’s notice. Freedom of assembly, freedom of the press and the right to life, liberty and justice for all, regardless of language, creed or tribe – these are values that became codified in laws. The laws would be useless without the values that inspired them and without the requisite willingness to respect them. Americans had to fight a civil war of their own before these issues were settled in the U.S., and they struggle with them to this day. The same is true of many of the liberal democratic regimes that emerged in Europe in the 18th and 19th centuries. They were not adopted overnight, nor did they arise bloodlessly. But they seem like a simple fact of life today in these societies.

Iraq is not such a place governed by such values. Perhaps it will be one day. But that day is a long way off. Iraq’s history has been bloody and violent. Its population is made up of distinct tribes and religious and ethnic groups, and none have any reason to trust the others. People don’t become more empathetic or more willing to compromise because they have lived through the physical and emotional trauma of war and conflict. The worst part of hate and distrust is how insidious they are, and how they recreate themselves in the people who have been victimized by them. To think Iraq’s myriad factions are about to come together to expel the Islamic State and rule Iraq with love, equality and cooperation is a delusion. It is the very same mistake U.S. strategists made in 2003, when they let themselves believe Iraq was going to become a liberal democracy overnight by virtue of a piece of paper American advisors were going to help them write. The battle for Mosul is beginning. It’s a time for humility, not celebration.