Russian interference in the 2016 U.S. election has been making headlines for months now, as new revelations seem to come out every week. Two more surfaced in the past couple of weeks. On June 5, the Intercept published a leaked document from the National Security Agency that revealed that Russia’s General Staff Main Intelligence Directorate engaged in cyberespionage and a spear-phishing campaign against a U.S. company that produces elections-related software. Then on June 13, Bloomberg reported that Russia’s cyberattack on the U.S. voting system targeted as many as 39 states and included incursions into voter databases and software systems. According to Bloomberg, the U.S. was so deeply concerned about the scope and sophistication of these Russian cyberattacks that it took the “unprecedented” step of calling Moscow to complain.

The uproar over these reports has been compounded by allegations that members of Donald Trump’s election campaign colluded with the Russians. When Trump came to office, he wanted to improve U.S. relations with Russia, and even stated so during his campaign. He asked at one point, “Wouldn’t it be nice if we actually got along, for example, with Russia?” The media and Trump’s opposition present this openness toward dialogue and Trump’s own personal admiration for Russian President Vladimir Putin as evidence of his collusion with Russia.

But the only difference between Trump’s approach to Russia and that of his predecessors has been style, not substance. A year after Russia undermined confidence in U.S. security guarantees in the 2008 Georgian war, U.S. President Barack Obama’s administration tried to “reset” Russian relations. It failed miserably. President George W. Bush said in 2001 that he had met Putin, looked him in the eye, gotten “a sense of his soul,” and found him to be straightforward and trustworthy. Bush got it wrong too.

U.S. presidents always try to improve the relationship with Russia, and they always fail. In this sense, Trump is typical. Part of the reason successive U.S. presidents keep making this mistake is that presidents, like the electorate, tend to personalize everything. Trump wants to get along with Russia; Obama wanted a fresh start; Bush felt he knew Putin’s soul. They view Russia as something that can be handled by sheer force of personality. But the individuals and their personal preferences don’t matter, which is something Russia understands better than the United States does. Relationships between countries aren’t like relationships between people. Countries can’t be trusted to act any way except in their own self-interest. 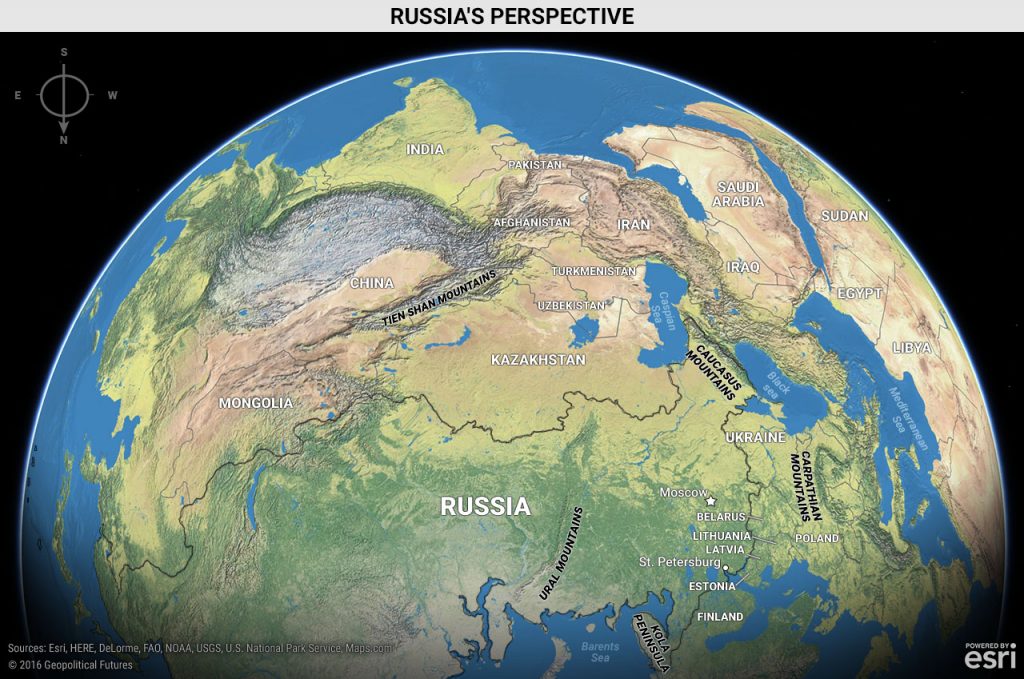 U.S. presidents have been unable to improve U.S.-Russia relations because the two countries have opposing interests. The map above sums up Russia’s interests in one picture. It is a highly vulnerable country. To protect its core – around Moscow – from potential enemies, it must expand outward into Central Asia, the Caucasus and Eastern Europe to develop buffer zones. (The U.S. is fortunate to have the Atlantic and Pacific oceans protecting it.) Russia will always push to have control over these areas, no matter who is serving as its president. If a liberal democratic revolution were to usher an opposition figure like Alexei Navalny into power tomorrow, or if Trump were impeached next week, the U.S. and Russia would still be at odds in the exact same parts of the world.

The main area of contention is the most vulnerable of Russia’s buffer zones: Eastern Europe. The other two are also significant, but Russia is not facing off against the U.S. in those regions. Central Asia is unstable and China is increasing its presence there, while the Caucasus region is seeing Turkey’s power grow. But Russia is still the dominant power in both these regions. It is Eastern Europe where Russia faces its greatest threats, and where it is the most at odds with the United States. From the Russian perspective, NATO is encroaching on Russia’s sphere of influence and the West is challenging the status quo by funding color revolutions through its support of nongovernmental organizations. From the U.S. perspective, Russia is attempting to hang a new iron curtain, and it can’t allow this to happen.

Despite the allegations of collusion against members of the Trump administration, the U.S. has not softened its policy toward Russia in Eastern Europe. Much has been made of Trump’s tough line on NATO, but the U.S. continues to solidify bilateral relations with countries like Poland, Romania and the Baltic states, all of which are crucial to establishing reliable defenses against potential Russian aggression. A U.S. armored brigade deployed to Poland as scheduled right before Trump’s inauguration and has not been withdrawn. Trump met with Romania’s president on June 9, and he plans to visit Poland in early July. Secretary of Defense James Mattis was in Lithuania last month. And Ukrainian media have reported that President Petro Poroshenko will visit Washington on June 19-20. Contrary to the media narrative, Russia’s position in Eastern Europe is weakening. 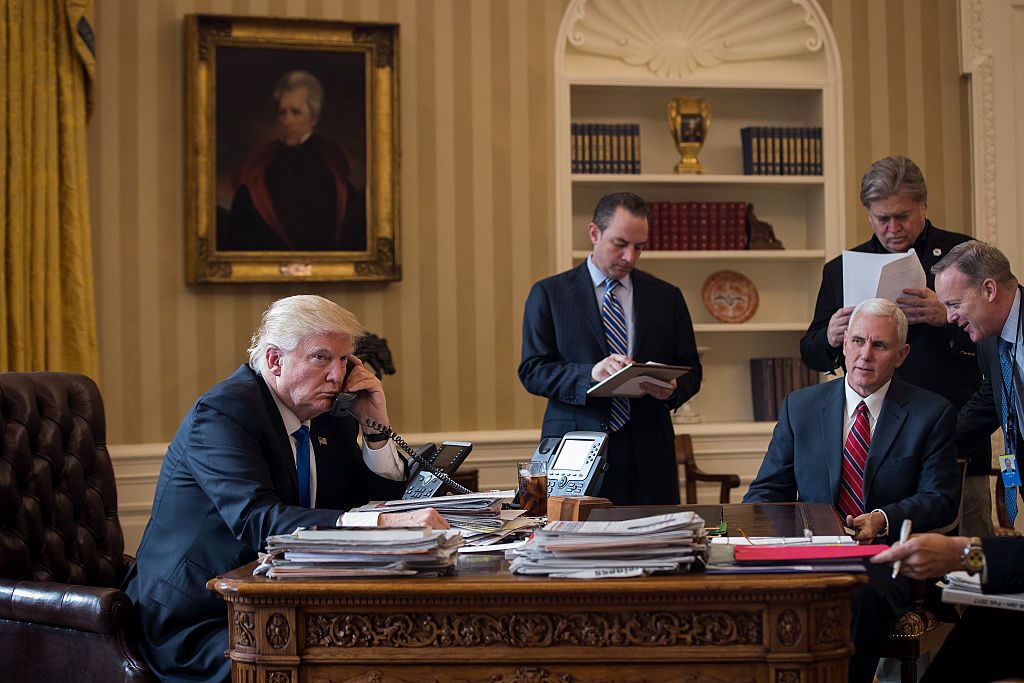 The U.S. and Russia have managed to cooperate on the ground in Syria, but this is only because Syria is not a primary Russian interest. It is, however, in Russia’s interest to contain the Islamic State, as it is also in the U.S. interest. Their cooperation is not always seamless, and in terms of tactical priorities the two sides are not always on the same page. But neither country wants to get bogged down in a protracted war in Syria, nor do they want to see IS expand into other areas. In Eastern Europe, interests create conflict; in the Middle East, they create potential for cooperation. Context is everything.

But none of this explains why Russia is engaging in cyberattacks on the U.S. election system. U.S. elections software is a long way from Russia’s geopolitical imperatives. The reason for the hacks is simple: Russia is weak. It doesn’t have the hard power it needs to protect its interests in Eastern Europe. It wants to sow seeds of domestic political turmoil in the U.S. both to undermine the legitimacy of U.S. democracy and to prevent the U.S. from efficiently responding to potential threats. None of the hacking revelations have demonstrated that Russia actually changed the voting results. Doing so would be counterproductive and invite a much more serious U.S. retaliation. Russia benefits from the mere whiff of impropriety and the subsequent political firestorm in the United States. But that firestorm has not been accompanied by paralysis in American foreign policy, as Russia would hope; the U.S. remains committed to protecting Eastern Europe.

If the United States is so concerned that Russia is going to decide the next president of the United States, the solution is simple: paper ballots. But then, paper ballots can be manipulated too, as anyone who has read Robert Caro’s account of how Lyndon B. Johnson stole his election to the Senate in 1948 by stealing votes can attest. If the U.S. were really worried about this, it would be doing more than calling Moscow to voice displeasure. The level of hysteria over Russia’s hacking into U.S. election systems is disproportional to what the Russians actually did. It is important to recognize that Russia has committed a (fairly weak) attack on the U.S., but that is not a reason for histrionics. It is a time for a cold and sober understanding of what is afoot.

Russia and the U.S. are not friends, and they are not going to be friends. They are also not enemies at war. They are two countries that have opposing interests in Eastern Europe and are pursuing those interests to maximize their power. Russia cannot achieve its imperatives by conventional force, and so it has resorted to a series of computer hacks of little practical consequence. The U.S. does not want to achieve its imperatives by force, so it supports pro-democracy groups in places like Belarus and Ukraine through its international development agency, the U.S. Agency for International Development, or the National Endowment for Democracy. It is a game without end that the U.S. and Russia have played for decades.

The U.S. is more powerful than Russia, and individual personalities, even presidents, have little to do with the overall relationship between the two countries. The United States’ most potent adversary in this fight is not Russian hackers but its penchant for overreaction.