Reuters reported on March 14 that Russian special forces were deployed to an air base in western Egypt, 60 miles from the Libyan border. While Reuters could not independently verify the presence of Russian special forces, Egyptian security sources and anonymous U.S. officials told the news agency a 22-member special forces unit had been deployed but did not state its mission. This has led some to question whether Russian involvement in Libya will deepen and whether Russia will step up its support for Libyan military commander Khalifa Haftar, who recently lost several oil fields to the Benghazi Defense Brigade, an Islamist militant group formed in June 2016 to oppose Haftar and the Libyan National Army.

However, the accuracy of the report has been called into question by both Egyptian and Russian officials, including Russian Foreign Minister Sergei Lavrov. Whether the report is true or not, it drew a misleading picture of the situation in Libya. Therefore, Russia’s involvement in the country deserves closer scrutiny. 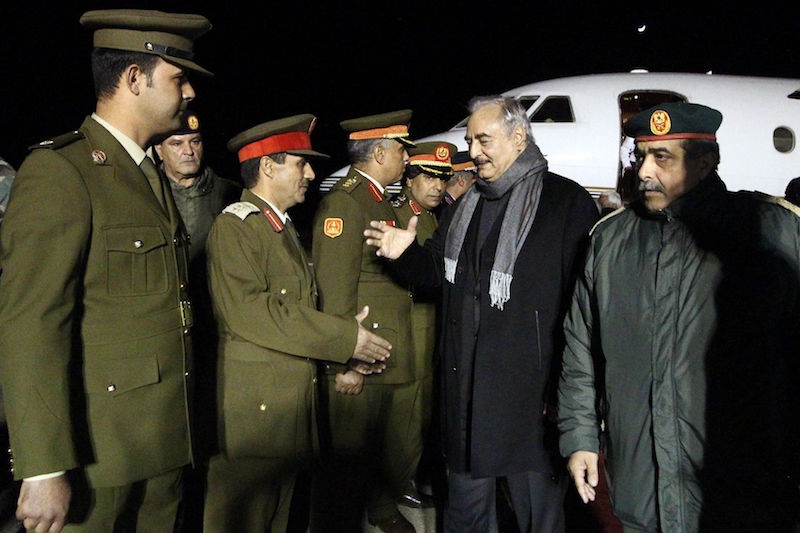 Khalifa Haftar (second from the right), the military leader of the so-called Libyan National Army and Libya’s parallel parliament based in the eastern city of Tobruk, is greeted upon his arrival at al-Kharouba airport south of the town of al-Marj, about 50 miles east of the Mediterranean port city of Benghazi on Dec. 3, 2016, after his visit in Russia. ABDULLAH DOMA/AFP/Getty Images

Russia has no strategic interests in the outcome of the Libyan civil war, and its continued involvement in the conflict only serves to help Russia portray itself as a considerable player in the geopolitics of the Middle East, able to project power into North Africa and the Mediterranean.

Since the death of its dictator Moammar Gadhafi in 2011, Libya has been extremely unstable and has failed to establish a single government that is accepted by a large part of the population. European countries, particularly Italy, are concerned about Libya’s fractionalization, since they are key destinations for refugees departing from Libya. But apart from being a source of migrants to Europe, Libya has little geopolitical significance. Countries, including Russia, have little to gain and much to lose from getting dragged into the Libyan crisis.

Considering Libya’s oil reserves are the largest in Africa, one could claim that external intervention in this conflict could be motivated by oil. However, Russia does not need more oil. The country has large reserves, and oil exporters are currently suffering from low prices and oversupply. Russian oil company Rosneft and Libya’s National Oil Corporation signed a memorandum of understanding last month. While this demonstrates that oil deals are appealing, they are unlikely to be successful amid instability that makes exploration difficult, which is the case in Libya.

Libya also has a coastline of 1,100 miles along the Mediterranean Sea, and port cities such as Benghazi and Tobruk could be seen as strategically important. However, to make use of Mediterranean ports, Russia would have to be a considerable naval power in the Mediterranean. Theoretically, it could supply ports in the region through the Black Sea, but such a scenario is not viable because Turkey has no reason to grant Russia more access to the Mediterranean via the Bosporus than it does currently for commercial purposes. Even if the Turks looked the other way, the U.S. also could block the Bosporus, denying Russians access to the Mediterranean. Russia is in no position to challenge U.S. military power, but being involved in places like Syria and Libya gives Moscow the appearance of being a stronger power than it is.

The alleged deployment of a 22-member unit is not a sign of increased Russian involvement; it is, if anything, proof that the Russians are understandably unprepared to make a large commitment. Even in Syria, where they are backing a regime that is in control of nearly half the country, the Russians have deployed a modest force. It would make no sense to commit large military resources to Libya, a country awash with militias engaged in a civil war that is not about to end in the foreseeable future. In fact, Russian involvement in Libya is not dissimilar from its involvement in Syria: It is not the country’s strategic significance that has led the Russians to get involved, but the opportunity to depict Russia as a powerful nation on the world stage. President Vladimir Putin has an interest in diverting attention at home away from domestic problems, such as the floundering Russian economy. He wants to convince Russians that Moscow has not forfeited its strength, and both Syria and Libya give him a chance to appear to be a stronger leader than he really is.

But it is an illusion, and only an understanding of Russia’s interests and constraints can help reveal the reality of the claim that Russia is deploying forces in Egypt to enhance its influence in Libya. Far from being able to project power that far from its borders, Russia is happy to gain mileage from the media generating the impression that, after Syria, Moscow is expanding its footprint into the wider Middle East.