Three months ago, we published a detailed analysis of the Islamic State’s military strength in Syria and Iraq. Since the publication of that report, Iraqi forces drove IS fighters out of Ramadi, Syrian Democratic Forces (SDF) led by the Kurdish People’s Protection Units (YPG) have advanced about 40 miles from al-Hasakah to al-Shaddadi and Russian air support has allowed Bashar al-Assad to consolidate his position in Aleppo province. This flurry of tactical activity is not immaterial, but also does not change our overall assessment. The Islamic State continues to dominate its core area between Raqqa and Deir el-Zour and to demonstrate flexibility on the battlefield.

Of the four vulnerabilities laid out in our December report, we pointed out the most appealing avenue for a force looking to cripple IS was a southward drive from al-Hasakah to al-Busayrah. The SDF, supported by American airstrikes and special operations forces, has in the last three months advanced approximately 15 miles along this axis. According to a U.S. military spokesman, the SDF launched an attack on al-Shaddadi on Feb. 16 with a force of approximately 6,000 fighters. By Feb. 24, the SDF claimed it controlled al-Shaddadi, and there have been unconfirmed reports of SDF forces making significant headway as far south as Markada.

The SDF and the U.S. have portrayed this as a major victory because it cuts IS off from its supply line between Mosul and Raqqa, but there are still wide swaths of desert that the SDF cannot control. The most notable element of this offensive is not the blocking of the supply line, or whatever small oil and gas facilities IS lost control of as a result, but rather how fast the battle was over. That could indicate an overwhelming defeat, and the U.S. tried to explain this by extolling the improved coordination between U.S. advisors and SDF forces. But based on previous IS behavior, it is far more likely that IS retreated, knowing that al-Shaddadi is not a critical strategic point on the battlefield.

IS does not want to lose territory. But it also does not want to expend fighters in holding territory that isn’t critical to its aims of protecting its proclaimed caliphate. U.S. and SDF spokesmen have said that over 250 IS fighters died in the al-Shaddadi offensive, and various local media reports put the total number of IS forces in the town at 2,000. It is impossible to verify such claims, however, previous U.S. estimates of IS strength have proven to underestimate IS forces. The closest analogue to what happened in al-Shaddadi is the “battle” for Ramadi, where Iraqi forces outnumbered IS 10 to one and still could not overwhelm IS, only managing to retake the city because IS pulled out. 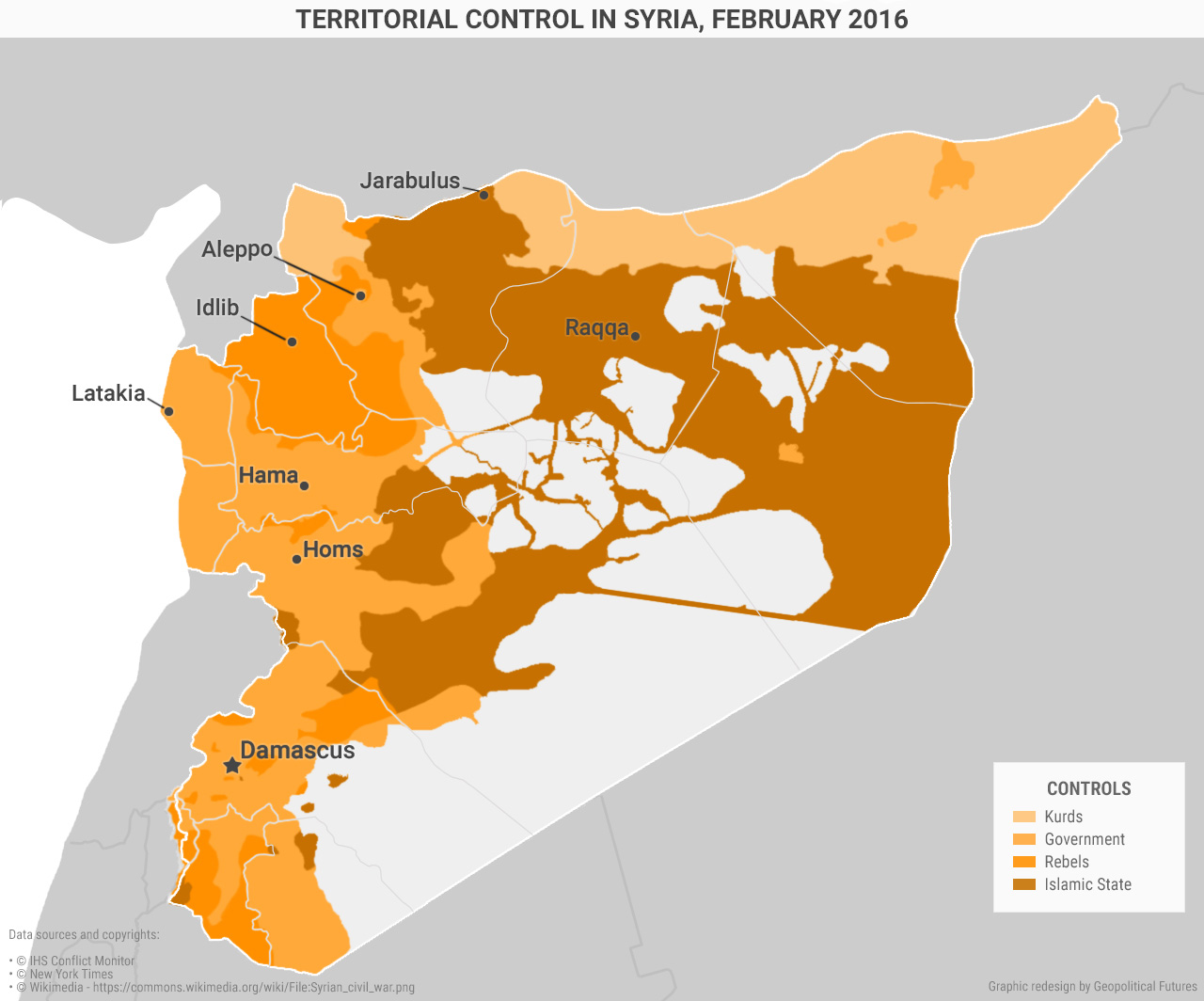 Now that the SDF controls al-Shaddadi, the assumption is that it will continue to push south with its 6,000 fighters. We believe that As Suwar is the IS tripwire – that is, the point at which IS will no longer retreat, but rather will throw all of its resources at an approaching enemy. As Suwar is 50 miles south of al-Shaddadi. For some perspective, consider that it has taken SDF forces three months just to move 13 miles in the desert against an opponent not invested in keeping the territory. Moving 50 miles against a much more invested opponent is going to be difficult in its own right. Defending the supply lines necessary to support an SDF force moving that far south from its own core territory will be even more difficult.

IS has already shown how it reacts to such moves. Shortly after the SDF announced that it had secured control of al-Shaddadi, IS launched a surprise attack on Feb. 27 against YPG forces in Tal Abyad. After two days of fighting, IS withdrew. A YPG official claimed 43 YPG fighters had been killed compared to 140 IS fighters, but the YPG official had every reason to mask how serious the IS assault was. An SDF force attempting to advance further south must contend with not only IS raiding its supply lines, but also staging attacks at vulnerable SDF positions from which the SDF has had to pull its main resources.

Meanwhile, to the east, the Islamic State is facing a resurgent Assad regime, one that in November was able to end an IS siege of Kuweires air base in Aleppo province. Assad and IS forces clash in certain areas, but they are not each other’s main competitor on the battlefield. Assad cannot allow IS to become too strong or to stop his forces from making gains against Syrian rebels, particularly in Aleppo province. But Assad also has an interest in IS continuing to project a serious threat because, by comparison, Assad seems like a moderate. So IS continues to hold its positions outside Palmyra and Homs in a stalemate with the Assad regime. It also carries out bombings, like the attacks against non-Sunni neighborhoods in Damascus and Homs on Feb. 21, which killed over 140 people. Aggravating sectarian tensions is a classic IS recruiting tactic.

And as for whether the Russian- and U.S.-backed “ceasefire” changes the situation at all for Islamic State, keep in mind that according to the Syrian Observatory for Human Rights, 135 people died in fighting in the first week of the truce – and that was only in the areas that were covered by the agreement. A comprehensive ceasefire would change the balance of the situation, as it would allow the various feuding factions to concentrate on fighting IS, but it is our view that a true resolution to the Syrian civil war is still a long way off. Even if there is a force in Syria strong enough to defeat IS, such a force won’t have an opportunity to focus on fighting IS for quite some time.

We track the situation on the ground very closely in Syria because it is a key part of our annual forecast. But tracking IS can be difficult because there are reports circulating constantly of the next decisive anti-IS victory, which creates a narrative that IS is losing strength. A perfect example is the Reuters report on March 5 claiming that Syrian rebel fighters took control of the al-Tanf border crossing, which according to the Syrian Observatory for Human Rights had been controlled by IS since May 2015. This crossing is between Syria and Iraq, but very close to their borders with Jordan. Located in the middle of the desert, there is one main highway running through the crossing that leads either to Ramadi or to the main population centers being fought over by the Assad regime and Syrian rebels. Holding this border crossing is not a demonstration of IS’ weakness or the rebels’ strength. What good is a border crossing in the desert in a region where all the borders have become obsolete?

The SDF approach towards Deir el-Zour, on the other hand, has our attention. The SDF faces a great number of challenges as it attempts to push forward, but it is attacking IS on its most vulnerable axis and therefore its actions are of some consequence. Our model says they will not be able to succeed in pushing to As Suwar, let alone to Deir el-Zour, but we are constantly attempting to falsify our model with new information. However, nothing we have seen in the past three months makes us think that our model is off track. The question of whether Islamic State is winning often comes up. And the simple answer is no – but it isn’t losing either. It is surviving. This makes IS similar to most other fledgling states in the world.

Trump, Taiwan and an Uproar