China’s commerce minister canceled a planned trip to the Philippines on Feb. 23 after only informing Philippine officials about the cancellation the previous afternoon. Unnamed sources at the Philippine trade and finance ministries told Reuters that China canceled the visit because of the Philippine foreign minister’s critical comments about China at an ASEAN meeting on Feb. 21. China’s foreign minister told reporters in Beijing that the meeting simply had been postponed, not canceled, and that preparations to execute previously negotiated economic deals between the two countries were continuing. China’s foreign minister, however, also made a point of describing his Philippine counterpart’s remarks as “baffling and regrettable.”

Since President Rodrigo Duterte came to power, the Philippines has maintained an unprecedentedly open stance toward cooperation – and even alliance – with China. This openness was punctuated by Duterte’s visit to China in October 2016, where he agreed to many deals concerning economic development (Chinese investment in the Philippines) and proclaimed a Philippine “separation” from the United States. The honeymoon phase turned out to be very short. The investment checks have not been written or cashed, but merely promised. The Philippines sent a note of diplomatic protest to China in January over Chinese moves in the South China Sea. The Philippine defense minister said in January that China’s activities in the South China Sea were “very troubling.” In other words, the Philippines has been cultivating a position of strategic ambiguity when it comes to its relationship with China. 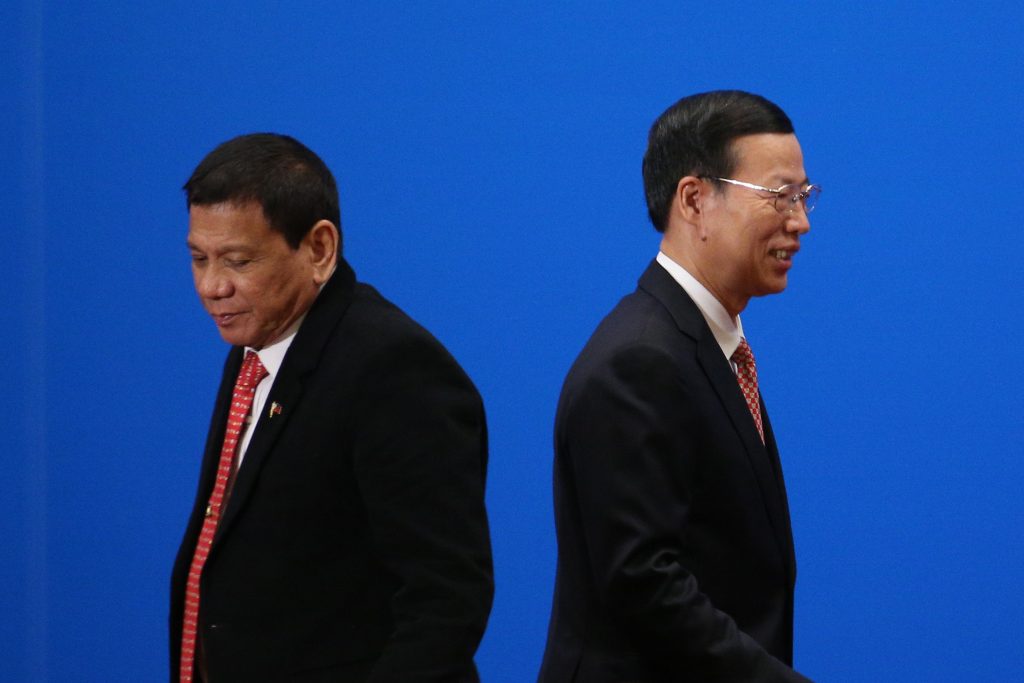 China’s Vice-Premier Zhang Gaoli, right, walks past Philippine President Rodrigo Duterte in a file photo from the Philippines-China Trade and Investment Forum at the Great Hall of the People in Beijing, on Oct. 20, 2016. WU HONG/AFP/Getty Images

For China, however, ambiguity was a step up from antagonism. It also represented an extremely important opportunity China could not pass up. The entire clamor about China building facilities in the South China Sea misses the fact that these installations are for defensive – not offensive – purposes. The various islands and reefs China is reclaiming cannot even hold strategically significant amounts of weapons and materiel and are easy targets for foreign missile strikes. Not to mention that high tide is as potent as an enemy’s air force.

A potential alliance with the Philippines, however, is another thing entirely. First, it would eliminate a key U.S. ally in the region. Second, if the Philippines were willing to host Chinese forces, it would give China its first real strategic foothold in the region. This is why China would be willing to pony up almost 20 percent of its annual foreign direct investment to all countries in the world in just one set of agreements with the Philippines in return for a better relationship. Flipping the Philippines from enemy to ally would be far more consequential than any Chinese island-building activity or rudimentary aircraft carriers put to sea with fanfare disproportionate to their capabilities.

This was much different than the official ASEAN statement released after the meeting, which contained no revelations. What was new was the Philippines publicly criticizing China and insisting that there had been unanimity at ASEAN over dissatisfaction with Chinese aggression. In upbraiding the Philippines for these remarks, China’s foreign minister made a point of mentioning that China and the Philippines had agreed to work out such issues bilaterally. China’s insistence on bilateral relations with South China Sea claimants is a euphemism for “divide and conquer.” None of the claimants in the South China Sea can stand up to the Chinese military or economic influence. But if all the countries banded together against China, it would significantly curtail China’s advantage.

The key question lurking behind all of this: Why did the Philippines decide to do this now? On the surface, it is even stranger considering that Duterte had a meeting with an International Department of the Communist Party of China delegation on Feb. 20 that, by all accounts, was pleasant and in line with improving Chinese-Philippine ties. The Philippines knew what it was doing by criticizing China in the manner that it did, and understanding the reason behind the Philippine move is key to understanding the future of both U.S.-Philippine and Chinese-Philippine relations.

The answer to this question has three distinct levels. At the public level, it is not a coincidence that U.S. officials leaked a story to Reuters the day after the Philippine foreign minister made his statement. The leak said that China has almost finished several structures meant to store long-range surface-to-air missiles on Subi, Mischief and Fiery Cross reefs in the Spratly Islands chain. It is a fair inference that the U.S. shared this intelligence with the Philippines before it was leaked and that there was more to share than what has appeared so far in the media. That the Philippine foreign minister doubled down on his statements on Feb. 23 and made specific mention of Scarborough Shoal, which has been a major bone of contention between China and the Philippines since a standoff there in April 2012, is further evidence of this. 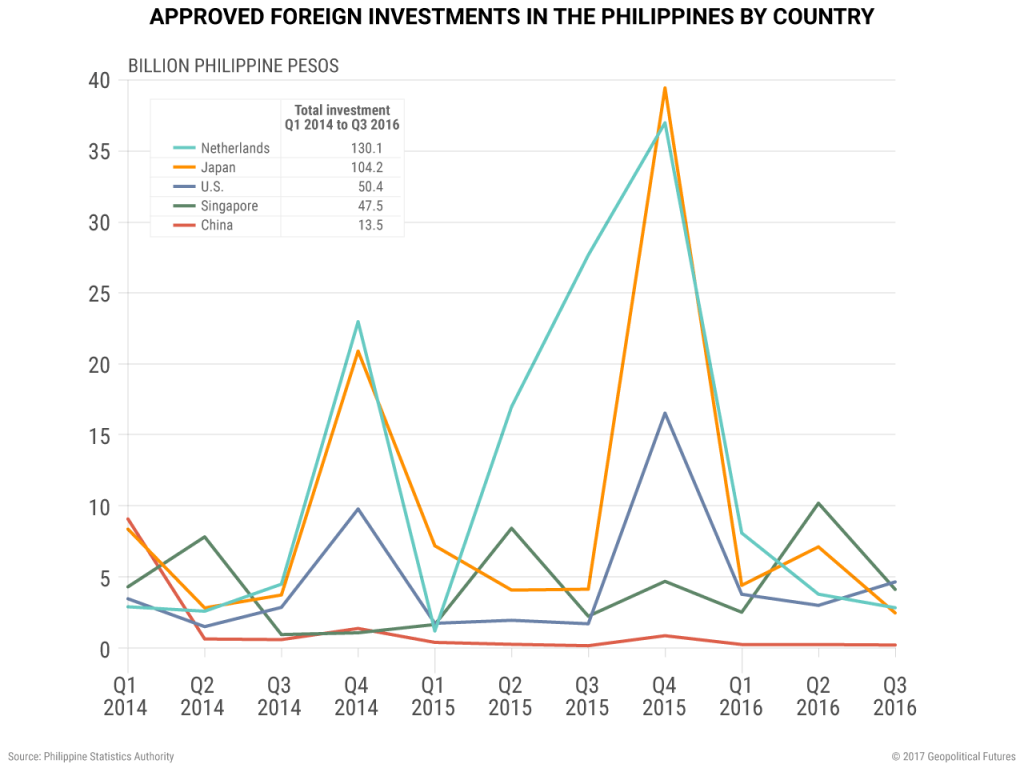 At the geopolitical level, there is the simple fact that China and the Philippines claim parts of each other’s territory as their own and neither side can give up those claims. For the Philippines, giving up territorial claims for the benefits of an alliance with China makes little sense. Money can be secured elsewhere. More powerful allies concerned with defending the Philippines rather than taking Philippine territory are readily available. China giving up some of its claims for the sake of an alliance makes more sense, but nationalism is a crucial part of the legitimacy of the regime, and every Chinese grade school student learns that everything within the “nine-dash line” is China’s. China giving up on those claims would make both the regime and President Xi Jinping appear very weak, which for many reasons is not something China’s ruling class can afford right now.

The Philippines has its problems with the U.S., not least of which is the serious baggage of U.S. imperial rule. But the U.S. is more powerful than China, located 8,000 miles away and interested in maintaining the status quo, which by extension means maintaining Philippine territorial integrity. That makes the U.S. the superior partner for the Philippines no matter how mercurial the president in Manila seems. Like all countries, the Philippines would prefer more independence in its foreign policy decisions. Cultivating the relationship with China is a good play to increase Philippine leverage with its current allies. But there are limits to how far this can go, and the sudden cancellation of a Chinese commerce minister’s visit to the Philippines reveals one of the boundaries.