It wouldn’t be a normal day in the Philippines if President Rodrigo Duterte weren’t finding new and inventive ways to insult the United States. Two days after the U.S. State Department said it would halt the sale of 26,000 assault rifles to Philippine police forces on account of opposition in the Senate, Duterte said in a televised speech: “Look at these monkeys, the 26,000 firearms we wanted to buy, they don’t want to sell. Son of a bitch, we have many home-made guns here. These American fools.” 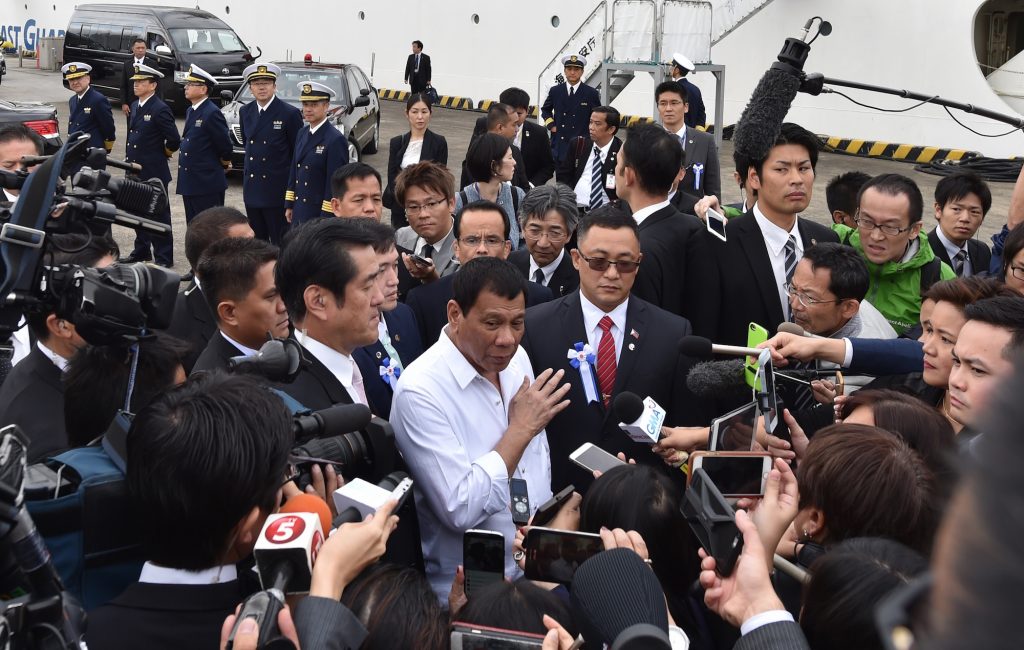 Philippine President Rodrigo Duterte is surrounded by the media as he answers questions following his inspection of Japan’s coast guard drills in Yokohama on Oct. 27, 2016. KAZUHIRO NOGI/AFP/Getty Images

Every time Duterte says something like this, the headlines the following day are easy to predict. The U.S. is losing an ally in the important Asia-Pacific region. U.S. power is eroding before the world’s eyes. China looks like the dominant power of the region. And then the news cycle runs its course, and Duterte is quiet for a few days, and the U.S. and the Philippines continue to cooperate like two allies who have had a Mutual Defense Treaty for the last 65 years, until Duterte says something again and the cycle repeats itself.

Duterte is the prototypical anti-U.S. politician right now, but the U.S. has plenty of relationships with countries whose leaders have insulted the United States. Consider the U.S. relationship with one of its most important allies in the world: Turkey. After the failed military coup in Turkey, President Recep Tayyip Erdoğan purged many sectors of society. The U.S. criticized Turkey for this, and Erdoğan fired back by pointing a finger at the United States, claiming Washington was behind the coup.

There are very real strains in the relationship between Turkey and the United States. But not because Erdoğan has a deep aversion to U.S. President Barack Obama or the U.S. in general. Turkey is a rising power and does not wish to do the U.S.’ bidding whenever it needs. It has existential interests in bringing order to chaos the U.S. helped unleash on Turkey’s southern borders in a failed attempt at state-building in Iraq following the second Iraq war. Turkey wants a major seat at the table. All of its moves emerge from this reality including its on-again, off-again relationship with Russia and its demonstrative moves across the border in Syria and Iraq. Erdoğan can accuse the U.S. of whatever he wants – it won’t change the fact that both sides need each other right now.

Another example of this fallacy is the U.S.’ relationship with Israel. The fact that Obama and Israeli Prime Minister Benjamin Netanyahu don’t like each other very much has been well-documented by various well-respected news outlets. And though Netanyahu has never called Obama or any other U.S. leader half the things Duterte has, I’d submit he’s done worse. In March 2015, Netanyahu accepted an invitation from the Republican Party to visit Washington, and for nearly an hour on the floor of Congress proceeded to eviscerate Obama’s decision to move ahead in signing the Iran nuclear deal.

It is true that the United States and Israel have drifted apart in recent years. The foundation of the U.S.-Israeli relationship was the Cold War, and as the balance of power has shifted in the Middle East, Israel has become less important to U.S. interests. The two remain allies, but the U.S. now sees Israel as one of four key regional powers. Israel is stronger and more secure than ever, and while it depends on U.S. security guarantees, it feels empowered to pursue its own interests even if they don’t line up perfectly with directives from Washington. None of this has anything to do with the frosty relationship between Obama and Netanyahu. The U.S. signed a 10-year, $38 billion military aid deal with Israel in September. Netanyahu’s attempt to embarrass Obama on the floor of Congress didn’t matter much in the end.

Presidential candidates also aren’t immune to offensive statements. In 2007, Boris Johnson, the United Kingdom’s current foreign secretary and the colorful former mayor of London, insulted presidential candidate Hillary Clinton in a column he wrote for The Telegraph: “She’s got dyed blonde hair and pouty lips, and a steely blue stare, like a sadistic nurse in a mental hospital. … It is time to think of supporting Hillary, not because we necessarily want her for herself, but because we want Bill in the role of first husband.”

If Clinton does become the next U.S. president, no one is concerned the relationship between Britain and the United States will be greatly strained, because Britain’s current foreign secretary once said some caddish things about Clinton. Even after Brexit, which Obama publicly campaigned against to great criticism from some British citizens, the White House’s immediate response was a statement saying, “The special relationship between the U.S. and the U.K. is enduring, and the U.K.’s membership in NATO remains a cornerstone of U.S. foreign, security and economic policy.” The relationship will endure no matter the personalities steering both ships.

Colorful statements such as the ones above often generate a great deal of attention, but they obscure more than they reveal. The U.S. has complicated relationships with the countries listed above, but each is to a certain degree a U.S. ally. Spend too much time listening to the noise and you might assume otherwise.