The crisis with North Korea has quieted down. Or, to be more precise, the major media outlets have drastically lost interest in it. In truth, the situation is the same as it was while the headlines were filled with foreboding. The Democratic People’s Republic of Korea has reached a point in its nuclear and missile programs that it appears either to have deliverable weapons or to be near that point. The United States appears to be uncertain of which it is but finds both unacceptable. Its policy, stretching back many administrations, is that the United States cannot live with a nuclear North Korea because it cannot be certain of Pyongyang’s intention. Nuclear weapons in North Korea’s hands could threaten Tokyo and Seoul immediately and, later, as the North’s missile program matures, the United States.

The United States continues to maintain a carrier battle group, along with at least one reported submarine, near the Korean Peninsula. U.S. strategic aircraft based in Guam remain available for a strike. North Korea still has masses of artillery, guarded by air defense systems, in place to threaten Seoul. Nothing has happened in the past few weeks that ought to have calmed the situation, yet here we are.

The U.S. government is the reason for that. Administrations know how to promote or demote a foreign crisis. They do this simply and inexpensively by using the media’s short attention span. The threats that President Donald Trump’s administration was issuing against North Korea generated focused and intense interest. By halting the alarming statements, or repositioning them so they are issued by someone outside the White House, the media’s attention drifts elsewhere. The media, regardless of its feelings toward an administration, still has its attention controlled by the administration. This is a paradox we should all ponder. If there is no White House announcement, there is no “crisis.”

But we know the crisis has not dissipated. The status of North Korea’s nuclear program is still an issue, and the United States still must decide what it is going to do about it. So why did it drop from the headlines, or more to the point, why did the Trump administration want it to?

Beyond the Old Game

Part of the reason is that the United States does not want to launch an attack against North Korea except as a last resort. A successful attack on the North Korean nuclear program would require superb intelligence and weapons that could penetrate whatever protection the North’s nuclear facilities have, from caves to concrete. After a strike, the United States must know it was successful. This can be harder than it sounds, and being wrong can have unpleasant consequences. Finally, the United States would have to shut down the North Koreans’ artillery massed north of Seoul before a metropolitan area of over 25 million people is devastated. As I have argued in the past, there are complexities to the obvious military problems, leaving aside the unknown preparations North Korea has made. 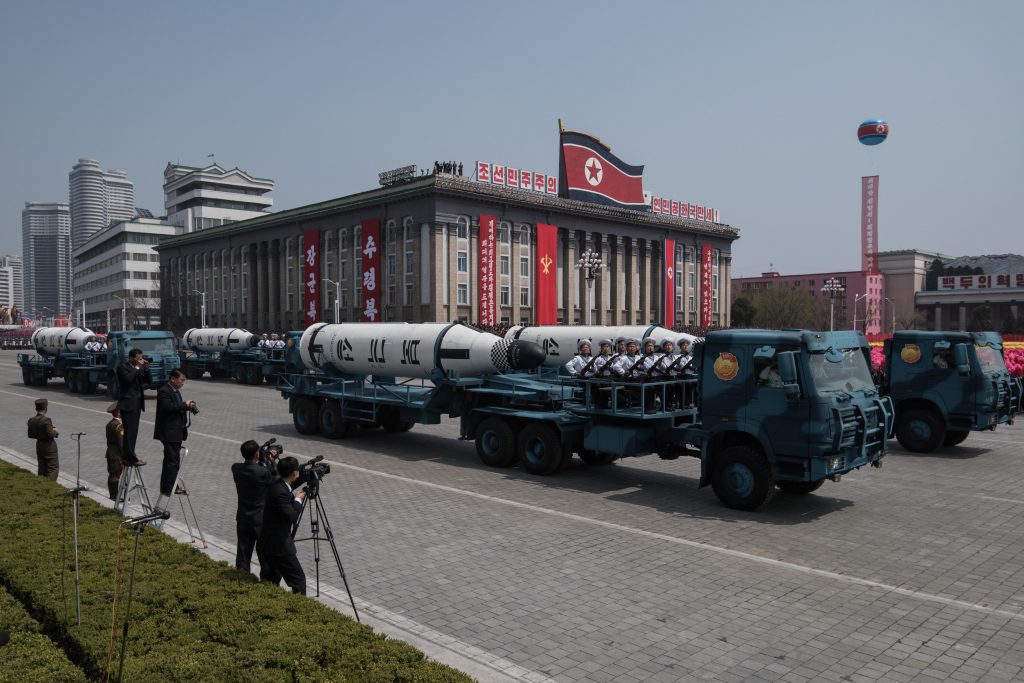 An unidentified mobile rocket launcher is displayed during a military parade marking the 105th anniversary of the birth of late North Korean leader Kim Il Sung, in Pyongyang on April 15, 2017. ED JONES/AFP/Getty Images

Therefore, the United States has moved into a period of negotiation. Posturing is necessary to set up the negotiation, but once negotiations have been opened, if they are serious and not for show, the posturing has to end. The United States has been asking China to pressure North Korea to do something – precisely what has not been specified – with its nuclear weapons. This is an old game in which the Americans ask the Chinese to pressure the North Koreans, North Korea reluctantly accedes to China’s wishes, and China exacts a price, normally economic, from the United States. The Chinese would have asked the Americans to reduce the noise level, but on the other side they would be content for the North Koreans to be as belligerent as possible, making the Chinese task appear harder than it is. For example, Pyongyang has been arresting U.S. citizens in North Korea. They are useful as hostages to be bargained away later, as an alternative to giving up its nuclear program while making China look helpful.

But there may be another element to the sudden quiet. According to Japan’s Kyodo News, a North Korean official who had previously been barred from entering the United States met with former U.S. government officials in Europe. The Japan Times added that the meeting was held in Norway. This is not as abnormal as it would appear. One of the charms of U.S. diplomacy is the deep desire of the president to deny that he is negotiating with adversaries. It is also the deep desire of current government officials not to be seen personally dealing with adversaries, or with potentially noxious subjects. Negotiating with North Korea would generate a media firestorm for the president and might be a career killer for government officials.

The normal protocol is to use “former government officials,” or really anyone who has some experience with and knowledge of North Korea and enough discretion not to take credit for saving the world from catastrophe. These are people who take perverse delight in being invisible until it is time to be seen. And this is the way the United States would flank the Chinese. My own personal confidence in China on these matters is low. It is possible that others share my view. If so, relying strictly on the Chinese to broker a deal would be foolish. Opening a direct channel to the North Koreans using people not authorized to speak for the U.S. government makes sense. If North Korea suddenly announced that U.S. officials were making concessions to Pyongyang out of fear of Kim Jong Un’s brilliance, Washington could deny any knowledge of such negotiations and call for an investigation.

The Most Important Phase

We may never know who revealed the meeting or why. It is sufficient to know that the meeting took place. I don’t know if this is the only channel. The United States likes to open multiple unapproved channels and send conflicting messages through them to measure the adversary’s reflexes. Sometimes the channels open themselves as U.S. citizens talk to foreign officials and the officials think they are speaking for the U.S. government. Chaos in the opening phases of a negotiation is useful, particularly between two countries that must negotiate and can’t afford to be seen negotiating. One of the channels turns out to function, and in due course a secretary of state announces an unprecedented meeting and takes the credit.

I am not belittling any part of this. As I said, a military operation is possible but difficult. The United States has no interest in the type of government North Korea has, it just doesn’t want it to have nuclear weapons. If it can reach an agreement to achieve its ends, in a verifiable way, and not have to depend on the good offices of the Chinese, it is likely to be prepared to strike a deal – assuming North Korea wants something other than to nuke Tokyo. But obviously, even admitting to thinking such thoughts would bring rage from all directions. The deal has to solidify, and before then, the mere fact that nobody can even admit that talks are going on doesn’t necessarily mean they will fail; it means only that they will probably fail.

North Korea’s nuclear program is as much of a problem for the United States today as it was a few weeks ago. Despite the media’s boredom with the issue, we are now in the critical phase, where the United States examines the possibilities of both avoiding war and halting North Korea’s nuclear program in its tracks, and permanently. The first phase was the realization of the program’s status, the second was the American roar. The third phase is the quietest and most important because it determines whether there will be a fourth phase, one very loud indeed.

Explanations for the Labor Shortage