We take for granted today how remarkable the modern nation is. Countries like the United States, the United Kingdom, France and Russia contain multitudes of different types of individuals, the vast majority of whom are relatively unaffected by foreign policy. Hans Morgenthau pointed out that nationalism drives these disparate individuals to experience the power and policies of their nations as their own, and that aggressive nationalism is often a result of economic or political stress. This is the great paradox of nationalism. It supplanted tribalism, faith and monarchy as the organizing principle of the international order in the 19th and 20th centuries, and it is the glue that binds diverse groups of individuals together into states. But it also means defining who isn’t a part of the nation, which can unbind both society and broader international institutions.

Today, nationalism in certain urban areas comes from a different source than in suburban and rural areas. The urban-rural split is not a novel discovery, but it has become more pronounced as a result of resurging nationalism. For example, when people in the U.K. voted on whether to remain in the European Union, Wales and England voted to leave. Scotland, Northern Ireland and the City of London voted to remain. The result of the referendum in London is the most striking. Scotland and Northern Ireland have been independent at various points in history, but London has been the capital of what is today England for almost a millennium. Of all Londoners, 60 percent voted to remain in the EU, but the majority of English voters wanted to leave. Some suggested (maybe jokingly) that, just as Scotland and Northern Ireland have done, London should explore whether it can remain within the EU and leave the rest of England behind. 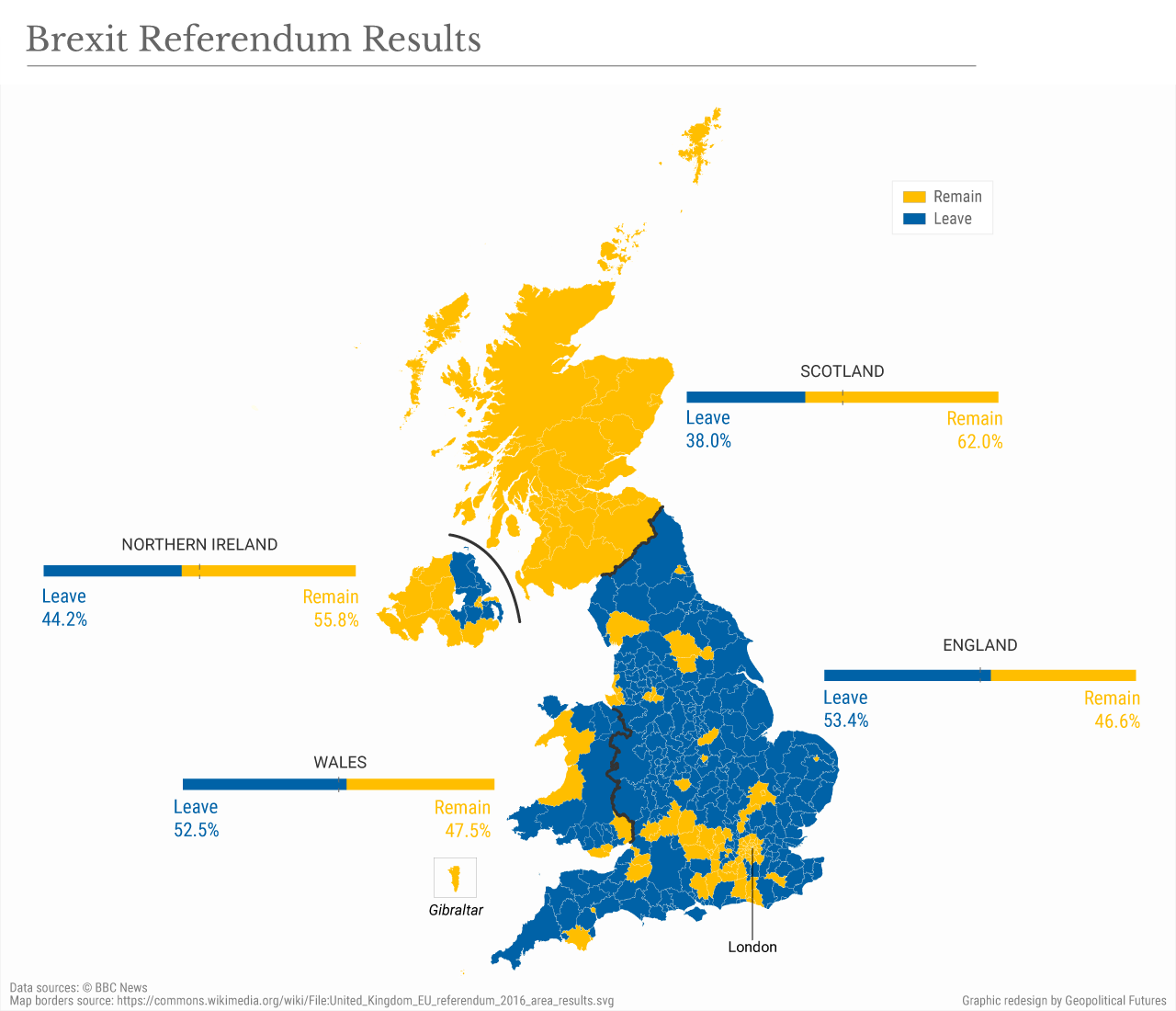 The results in the recent U.S. presidential election are even more striking. Donald Trump is often described as a nationalist candidate and in many respects the label fits. His slogan, “Make America Great Again,” to him meant getting rid of those who aren’t American (illegal immigrants) and instituting policies (repealing NAFTA, raising tariffs) that will be best for the American worker and not for the global economy. Americans’ response to Trump’s campaign revealed a distinct urban-rural divide, with New York City being a particularly salient example. Hillary Clinton won the five boroughs of New York City by an 81-19 percent margin. Take the votes of the five boroughs away, and Clinton wouldn’t have even carried New York state. It was not a coincidence that New York City became the epicenter of anti-Trump protests. It was precisely because New Yorkers could not believe they lived in a country where Trump could win a presidential election. 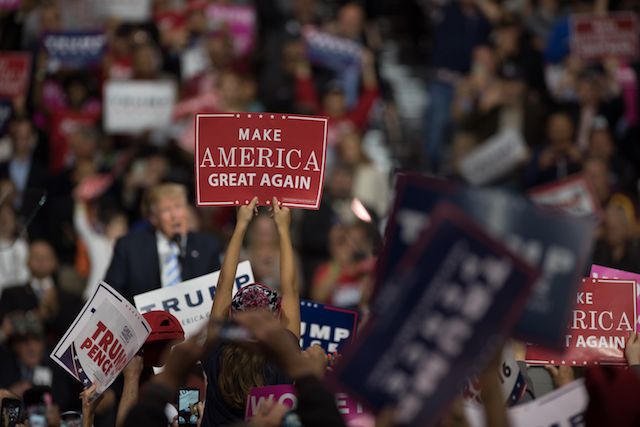 A supporter of Donald Trump holds up a “Make America Great Again” sign as he addresses supporters during a campaign stop at the International Exposition Center on Oct. 22, 2016 in Cleveland, Ohio. Justin Merriman/Getty Images

London and New York City are interesting case studies in how much cities can differ from the rest of the country. In London, for example, the median average salary for a resident in 2015 was nearly double that of the rest of the U.K. – 48,023 pounds ($59,800) compared to 27,531 pounds. This is in part because of a higher cost of living of course, but consider all the other ways in which London differs from neighboring counties. According to a report by consulting firm McKinsey, London’s GDP grew 27 percent faster than that of the U.K. as a whole. According to the U.K.’s last census in 2011, 37 percent of all London residents were not born in the United Kingdom. For the rest of the U.K., that figure was only 9 percent. London’s population is seven times bigger than any other British city and accounts for almost 15 percent of Britain’s total population.

In New York City and the U.S., the divide is just as conspicuous. According to the U.S. Census Bureau, the median income in the U.S. in 2014 was $51,939. In Manhattan, a borough of New York City, it was $69,569 and in nearby Westchester county, where the Clintons have a home and which is much more a part of New York City than it is part of the rest of the state, it was $81,946. New York City’s population is also disproportionately large, double the size of any other major U.S. city, and makes up roughly 40 percent of New York state.

Compared to rural areas of the U.S., New York City is also markedly more diverse. According to New York City’s Department of City Planning, in 2011, 37 percent of all New Yorkers were foreign born. This is in stark contrast to a state like Iowa, which Barack Obama won in 2006 and 2012 but flipped to Trump in 2016. A study published in 2014 by Iowa State University used data from three different time periods from over 99 Iowan towns to put together a composite image of the typical Iowan small town. The population of this fictional town in 2013 was 1,977 people, 92 percent of whom were white.

The needs of city dwellers have always differed from those who live in rural areas, just as the interests of people on the coast differ from those of people in the interior. But along with nationalism and the urban-rural divide, there is a rise in connectivity between megacities, where residents increasingly have more in common with each other than with other citizens within their countries. And because of advances in communication and technology, these city dwellers can freely communicate with and travel to visit their urban comrades in other countries more easily than at any other moment in human history. They view the values of their fellow citizens – based in nationalism tied to the state partly because they are more isolated and more dependent on the state than the city dweller – as provincial. At times, they prefer the values they share with people who live in cities – even if they are citizens of a different country.

As Londoners joke that they want to remain in the EU even after Brexit and New Yorkers continue their protests outside Trump Tower with chants of “not my president,” they are expressing a kind of solidarity with each other. This is not to say that London and New York City are about to secede from their respective countries and become independent city-states; the situation is not nearly so dire. But cities are now developing their own form of nationalism around shared urban values, while nationalism based on the nation-state lives on in non-urban areas. The average New Yorker doesn’t see how important and seductive Trump’s promise of restoring America’s greatness is to someone living in the Rust Belt or the rural South, where jobs are leaving, times are hard and on top of it all America seems weaker than ever. The average Londoner doesn’t see how important the U.K.’s sovereignty is to the average British citizen, who might not care about passport-free travel because he can’t afford a holiday in Italy anyways.

As a result, those who live in cities begin to feel as disconnected from the body politic as the body politic does from the political and financial elites. And in cities, which are diverse and often home to many immigrants, nationalism is expressed not in full-throated pledges of allegiance to the state, but rather by a reversion to the other national identities they carry within them. They feel less American, but more Jewish, Mexican, black, Dominican or whatever other identities are an important part of their individual lives. They feel less British, but more Scottish, Irish, Ulster or even European, whatever that means to them. Still others see themselves as part of a more global community, united more at times by a particular set of cherished values than by loyalty to their country, and take comfort in knowing that their worldviews are shared by those in other cities. All of these reactions are also forms of nationalism, though many in the cities don’t realize it, as they think of nationalism as that visceral and at times even illiberal reaction that “others” have. But there’s no way to escape nationalism in uncertain times such as these, and as nationalist sentiments increase, they will continue to bring people together and split them apart.

Approval Ratings of Putin and Governors