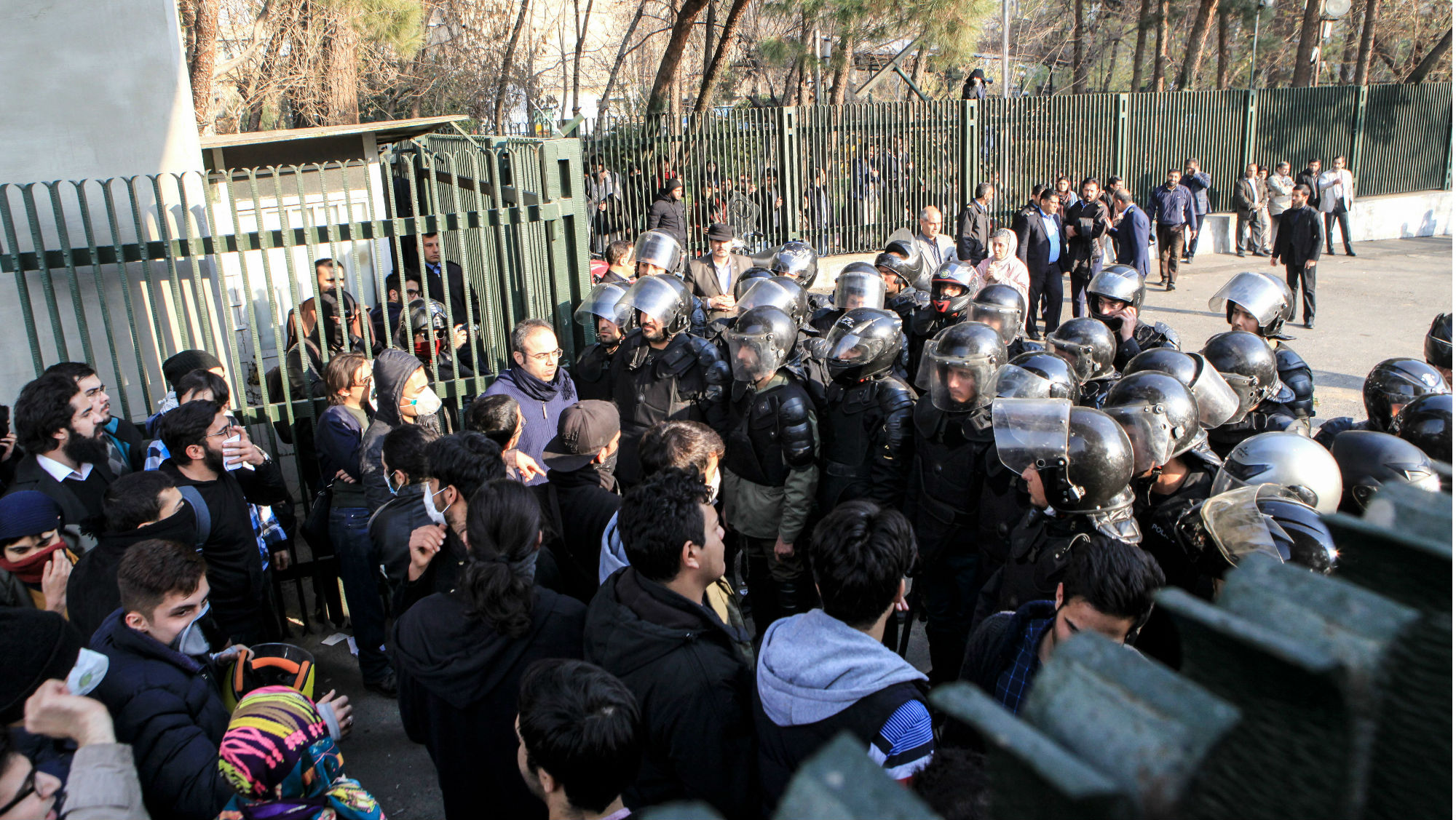 A mere seven months ago, Hassan Rouhani was riding high. He had just secured re-election as Iran’s president with 57 percent of the vote, a nearly 20-point advantage over his conservative challenger. But on Dec. 28, protests broke out in Iran, and as of this writing they haven’t stopped. The demonstrations aren’t yet a threat to the stability of the government, but they are a symptom of popular discontent with the economic problems that continue to beset the country many years into Rouhani’s administration and the nuclear deal it signed with the United States.

During his re-election campaign, Rouhani promised his people economic success. Though his government has lowered inflation and raised growth rates, it has thus far succeeded only in averting major crisis, not in delivering the promised prosperity. If the government in Tehran cannot correct the economic problems affecting daily life for Iranians, or at least deflect popular anger onto another source besides the government, the protests could morph into something more significant. 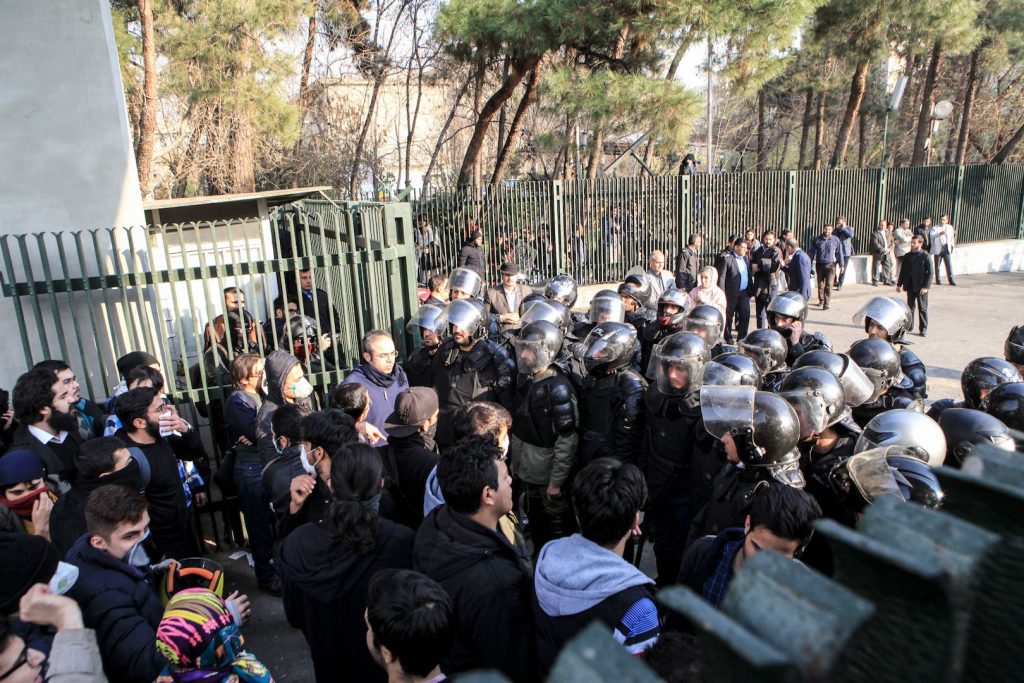 Iranian students scuffle with police at the University of Tehran in Tehran on Dec. 30, 2017. STR/AFP/Getty Images

The protests began in Mashhad, Iran’s second-most populous city and a deeply religious urban center where the government enjoys great support. Initially, the protests were driven not by politics but by discontent with rapidly increasing prices for basic goods. According to media reports, prices for food staples like eggs and poultry have risen by almost 40 percent in recent days. The most recent data from Iran’s central bank supports the anecdotal evidence. According to the official numbers, inflation jumped from 8.4 percent in October to 9.6 percent in November. Reports of additional rises in prices since the November figures were released suggest that inflation is continuing to climb in the country.

Considering that inflation in Iran was above 20 percent from 2012 to 2014 and peaked at around 45 percent toward the latter half of 2013, a rate in the single digits doesn’t seem very high. But those high rates came as Iran was feeling the effects of the U.S.-led sanctions regime against it. Inflation – and any other problems in the Iranian economy – could be blamed not on the government but on foreign imperialist powers that want to keep Iran down. Even with this ready-made scapegoat, Iranian citizens eventually tired of the situation and began to look for political options that would enable the Iranian economy to rejoin the world. National pride is a potent fuel, but food is a better one.

Rouhani rode the wave of discontent to office in 2013, promising significant changes in Iran’s strategy. A new enemy, the Islamic State, had emerged on Iran’s borders, and Rouhani’s Iran would be willing to work with the “Great Satan” to defeat it. Most important, however, Rouhani vowed to bring economic prosperity back to Iran. He planned to accomplish both goals by compromising with the U.S., trading Iran’s pursuit of nuclear weapons and influence on the ground in Iraq and Syria for the removal of sanctions. This was ostensibly achieved in 2015, and the first signs looked promising. The Iranian economy received a jolt and seemed to be making up for lost time.

The economic benefits of the deal with the U.S., however, have stalled in recent months. Iran and the U.S. became partners in the battle to defeat the Islamic State, but their success removed their common enemy. With the security threat eliminated, Iran went back to trying to project power to the Mediterranean. The U.S. went back to trying to keep Iran boxed in. To make matters worse, an especially anti-Iran administration moved into the White House. All told, Iran enjoyed a year and a half of steady economic growth, but it wasn’t enough to repair the damage done to it during the sanctions period, nor could it solve the inefficiencies in the Iranian economy that predated the sanctions regime.

Of Iran’s many economic problems, three are proving particularly resilient. The first is the spike in inflation. The Rouhani administration can’t place the blame on the U.S. this time – the U.S. has levied limited new sanctions against Iran, but it’s nothing compared to the restrictions of the early 2010s. Moreover, Rouhani’s government staked its power on the idea that it would be able to control inflation in part because it was willing to compromise with the United States. In May, Rouhani pledged to keep inflation in the single digits in the coming years. He is already in danger of breaking that promise.

The other two persistent problems concern the banking sector and unemployment. The administration has touted its successes in the banking sector, with the central bank governor declaring in May that nonperforming loans had been cut from 15 percent to 10 percent of total loans during the first four years of Rouhani’s government. The International Monetary Fund tells a different story. On Dec. 18, the IMF warned that Iran’s delay in implementing economic and financial reforms meant that the country was facing significant “near-term” challenges and needed urgent restructuring and recapitalizing of its credit institutions and banks. Meanwhile, unemployment in Iran remains persistently high. Rouhani’s administration got unemployment down to the single digits in 2015, but the rates have crept back up, hovering above 12 percent since April 2016 and now approaching 2012 levels.

When the protests began, they were focused on specific economic grievances such as these. They were quickly co-opted, however, by opponents of the government, who sought to make the protests not just about economic issues but also about the leadership of Rouhani and Ayatollah Ali Khamenei. 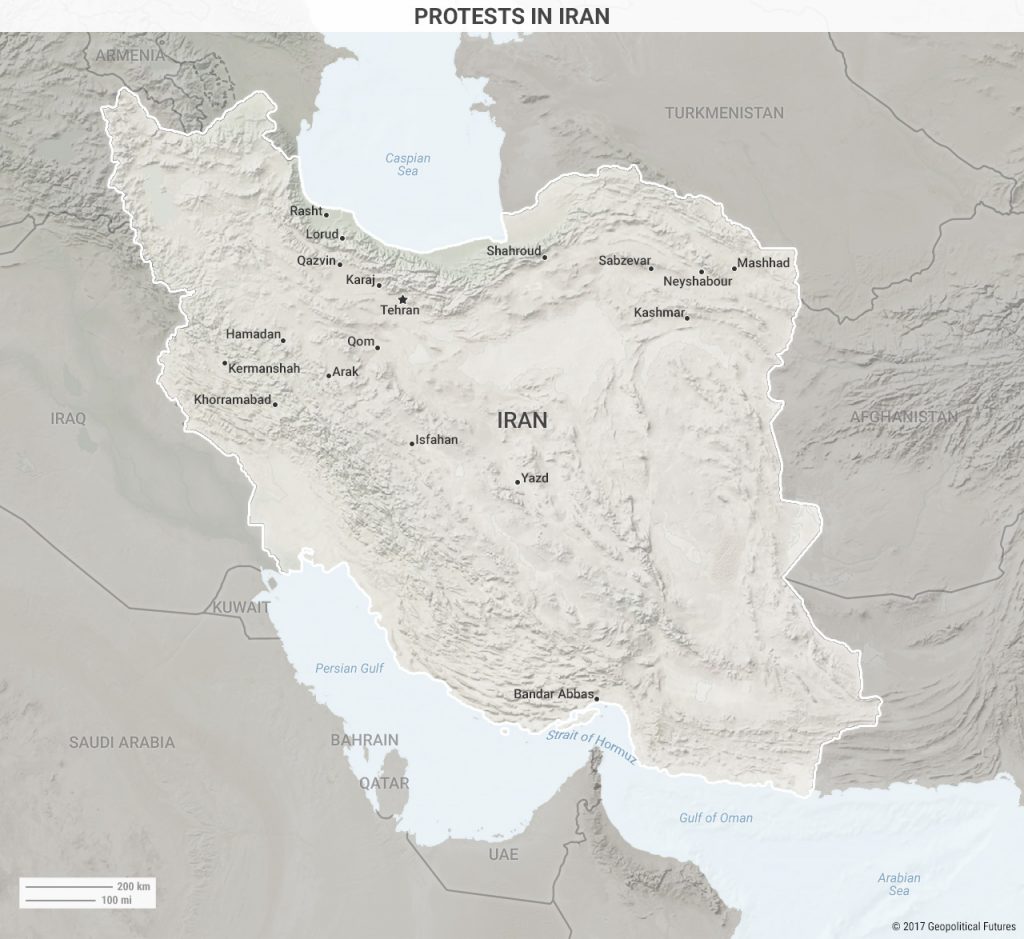 Thousands spontaneously protested in Mashhad on Dec. 28, and various small protests broke out in other Iranian cities, including Neyshabour, Kashmar, Yazd and Shahroud. The protests spread to other parts of the country the following day. On Dec. 29, there were reports of “hundreds” protesting in Kermanshah and Tehran, and “large” numbers also reportedly turned out in Rasht, Isfahan, Hamadan, Qom and elsewhere. Previously scheduled pro-government rallies were held Dec. 30, but anti-government protests continued to simmer in Tehran, Kermanshah, Arak and a few other small cities. The protests continued in several cities on Dec. 31 and Jan. 1, even turning violent at times. Iranian state TV reported that some armed protesters had tried to take over police stations but were repelled by security forces. All in all, at least 13 deaths have been reported.

The size and scope of the protests is impressive, though Western media have significantly overhyped some of them. The demonstrations in Tehran in particular have been made out to be more than they are – small student protests have occurred sporadically in the capital in recent months but are of little consequence. Far from marking a serious challenge to the government, the small size of these political protests compared with the pro-government rallies on Dec. 30 indicate that there is no general rising that threatens the viability of the Iranian state – at least not yet.

Far more important is the initial spontaneous protest in Mashhad and the subsequent protests it inspired. These rallies, centered on economic issues, are indeed a distressing sign for the government, especially if they are a harbinger of more popular disillusionment. It would be somewhat ironic if Iran, in its most strategically advantageous position in the Middle East since 2010, is forced to put its ambitions aside to deal with unrest at home. It would also be a challenge for GPF’s 2018 forecast, which predicts that Iran will press its advantage in the region in the year ahead. A few protests in Iran are not enough to say the forecast is off-track, but they are certainly worth monitoring closely.