At a time when it is struggling to manage the chaos in Syria, Turkey has been adamant about joining the efforts to liberate the Iraqi city of Mosul from the Islamic State. While there has been much noise over a Turkish military intervention in Iraq, Turkey’s actual behavior seems to suggest that it is unable to intervene. In the two Arab countries on its borders, Turkey faces a number of arrestors that Ankara will have to overcome before it can play a major role in stabilizing an anarchic Arab world. One of the biggest obstacles preventing Turkey from managing its southern flank is its principal regional competitor, Iran, which has had years’ worth of a head start in both Syria and Iraq. 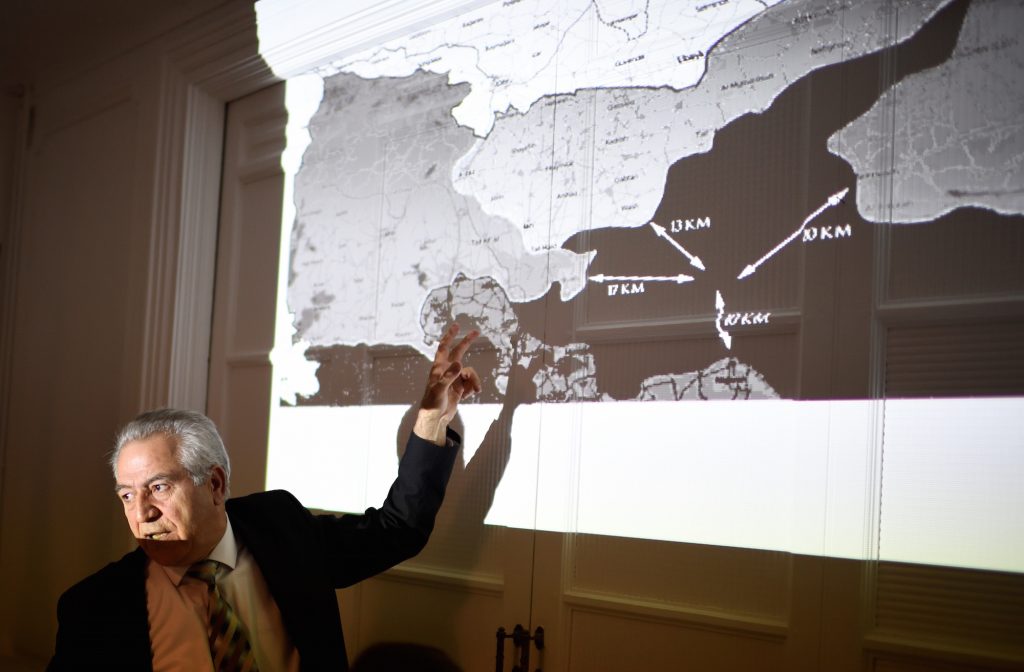 Kurdish Syrian representative in France Khaled Issa shows a map of alleged attacks against Kurdish forces as he accuses Turkey of “massively attacking” Kurdish forces trying to recapture Raqqa, the Islamic State group stronghold in Syria, during a press conference in Paris on Oct. 25, 2016. Iraq announced the launch of the operation to retake Mosul from IS on October 17, and has since been advancing towards the city from the south, east and north. ERIC FEFERBERG/AFP/Getty Images

On Oct. 24, Iran warned Turkey not to violate Iraq’s sovereignty. “It is not acceptable at all if a country, under the pretext of combating terrorism or any other crimes, tries to violate the sovereignty” of another country, Iranian Foreign Ministry spokesman Bahram Ghasemi told reporters at his weekly press conference in Tehran. President Hassan Rouhani also criticized Ankara’s military incursion into Iraq. Speaking on state television Rouhani said he “considers intervention of foreign countries (in Iraq and Syria) under the pretext of fighting terrorism and without coordination with the host country very dangerous, whether it is armored forces, air forces or ground forces.”

These statements from Iran follow a heated exchange between Turkish and Iraqi leaders over Ankara’s insistence that it be a part of the anti-Islamic State offensive in Mosul. The tensions between Ankara and Baghdad are not new though. They go back to 2015, when Turkey stationed 500 troops at a military base in the town of Bashiqa, where they have been providing support to Sunni and Turkmen forces opposed to the Islamic State. Turkey has consistently rejected such calls to withdraw. But it really didn’t matter until recently, when coalition forces were in the final stages of preparing to take back Mosul from the Islamic State. In recent weeks, Iraq’s Shiite-dominated central government has been accusing the Turks of undermining the fight against the Islamic State. 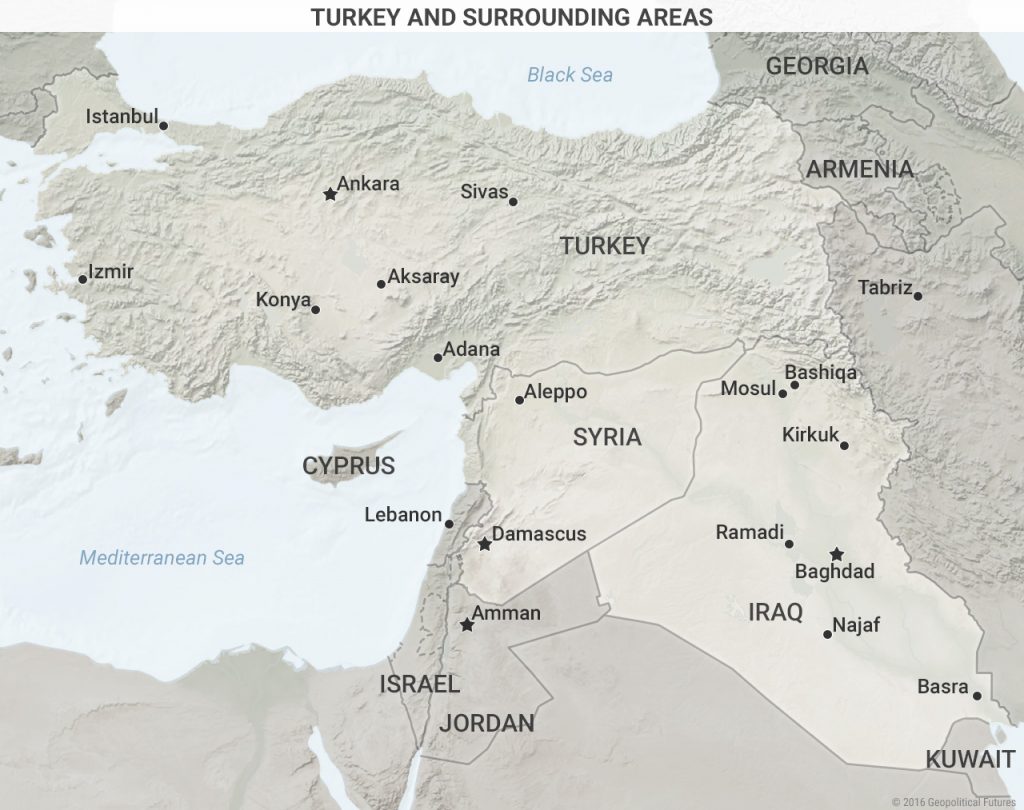 Iraqi Prime Minister Haider al-Abadi has said that Turkey should avoid creating a situation where Iraqi forces would have to open fire on Turkish troops and warned of a regional war. This stern warning was in response to the Turkish parliament extending the mandate of Turkish troops in northern Iraq on Oct. 1 for another year. Turkish President Recep Tayyip Erdoğan lashed out against the Iraqi premier on Oct. 11 calling on him to “know his place.” Erdoğan said, “You are not my interlocutor, you are not at my level, you are not my equivalent, you are not of the same quality as me. Your screaming and shouting in Iraq is of no importance to us. You should know that we will go our own way.”

Its harshness aside, Erdoğan’s language is reflective of both Turkey’s regional ambitions as well as its frustrations. Since long before this imbroglio involving Iraq emerged, Turkey has been fraught with the problem of how to deal with the fighting radiating out of Syria, with whom it shares a very long border. Ankara has been under pressure from its main ally, the United States, to play a bigger role in the fight against the Islamic State. From the Turkish point of view, Syria’s Kurds represent a threat that Ankara needs to sort out before it can take decisive action against IS. In addition to the Kurds, the Turks have to worry about the Russian intervention in Syria. Turkey has only recently started to try to repair its relations with Russia after Turkey shot down a Russian warplane on the Turkish-Syrian border last November.

While Turkey has been navigating an extremely complex battlespace in Syria it has run into problems related to Iraq – the other Arab country that it shares a border with. In both Iraq and Syria, Turkey runs into a common obstacle, Iranian influence. Since the current Shiite clerical regime came to power in Iran following the 1979 revolution, Iran has been an ally of Syria. The Iranian-Syrian alliance has a lot to do with the fact that the Baathist regime in Syria is dominated by the Shiite Alawite sect.

Since the U.S. toppled Saddam Hussein in 2003, the Iraqi state has been dominated by the country’s Shiite majority, whose political principals are pro-Iranian. Even though in recent years Syria and Iraq have both been weakened by civil war, the regimes in their respective capitals remain in place – in great part due to the efforts of Iran, whose sphere of influence on its western flank remains significant. In essence, this is a historic moment, in that for the first time in centuries Iraq and Syria are in the Persian/Shiite orbit. In the mid 16th century, it was the Ottomans who were in control of both Syria and Iraq and thus blocking the Persian Shiite Safavid Empire.

Today the situation is reversed. Iran has had significant influence in Iraq and Syria for many years. Turkey is just coming around to playing major league geopolitics. Turkey’s problem is not so much Iran as it is the fact that Ankara does not enjoy a monopoly within the region’s Sunni camp. While they are happy to use Turkey as leverage to counter the rise of Iran and its Arab Shiite allies, Sunni Arab states, particularly Saudi Arabia, do not want to come under Turkish influence.

As the last regional Arab power left standing after the 2011 Arab Spring, Saudi Arabia is a key competitor for Turkey – even though the two tend to cooperate on many regional issues, especially Syria. Meanwhile, the Islamic State is challenging both the Saudis and the Turks for leadership of the Sunni and wider Islamic world. This means that the Turks will have to first establish their undisputed leadership among the Sunni Arabs to be able to weaken their principal regional rivals, the Iranians. However, Turkey’s current geopolitical capital in both Iraq and Syria remains meager.

For Turkey to be able to bring order to the chaos in the Arab world, the Turks must achieve three things. First, they must defeat the Islamic State. Second, they must ensure that weakening of the Islamic State does not lead to the empowerment of the Kurds. Finally, the regimes in Iraq and Syria must be weakened to the point where they are forced to share power.

Each of these three prerequisites will be extremely difficult. Dislodging the cross-border Islamic State is unlikely to happen anytime soon. When it does happen, Turkey cannot ensure that the Kurds are not going to be a key beneficiary of the outcome. Well, at least not without a lot of bloodshed. If anything, the regimes in Damascus and Baghdad remain entrenched in their respective areas.

Thus, Turkey is putting itself on a path where it will eventually have to go beyond just rhetoric and with small steps reach the point where it emerges as the leader of the Sunnis and take on the emergent Shia.