The Turkish lira’s value has continued to drop despite attempts by Turkey’s central bank to curb its decline by raising interest rates in December and injecting $1.5 billion into the market on Jan. 11. The lira’s volatility has resulted from the country’s poor economic performance of late. Structural economic problems have caused the lira’s devaluation since 2009. Following the July 2016 coup attempt, the country has seen increased instability and decreased investor confidence, and this, along with the strength of the dollar, has led to the current run on the lira. In the short term, this means that Turkey will experience more volatility as it struggles to restructure its political economy. This will not rise to the level of challenging our long-term forecast that Turkey will become the Middle East’s major power. Increasing power is not easy nor does it happen on a linear, upward slope. Turkey will face significant internal political disorder and will have to resolve structural irrationalities as its power matures. Its current economic woes are a good example of this process at work.

The main cause of the lira’s devaluation is a loss in investor confidence. Currency devaluations often happen when investors’ trust in the economy’s stability diminishes because they perceive the government as either unable to contain potential volatility or, on the contrary, as increasing control over the economy, which could lead to nationalization of industries. Both scenarios result in investors trying to withdraw their money from the country, selling off their domestic currency denominated assets and causing capital flight.

Business confidence in Turkey has eroded since 2009 due to the 2008 global economic crisis and Turkey’s structural economic problems. But this process actually is rooted in the way Turkey developed after the 2001 Turkish economic crash. Following the crisis, the International Monetary Fund launched a remedy program that pushed for systemic reform in Turkey. This program and Turkey’s hopes for European Union membership resulted in increased budgetary transparency, more independence for the central bank and a general move toward a more open market. As a result, between 2002 and 2007, Turkey saw rapid economic growth, as the economy expanded at an annual average of 6.8 percent. 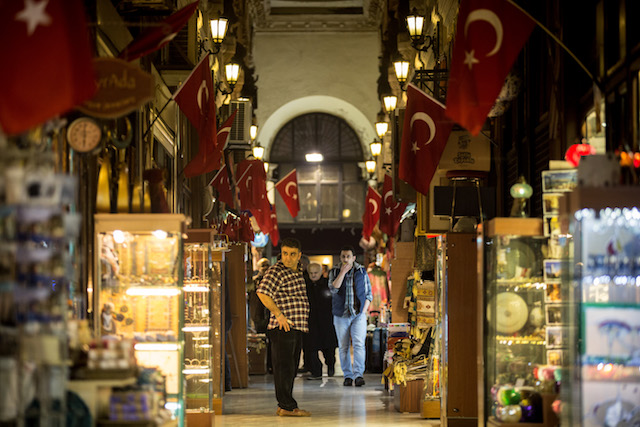 A shopkeeper waits for customers in a tourist shopping area on Feb. 24, 2016 in Istanbul, Turkey. Terrorist attacks, national conflicts, the refugee crisis and Russian sanctions took a toll on the Turkish economy and tourism industry. Chris McGrath/Getty Images

In contrast, average growth over the past decade was only 3.5 percent. As the EU faced growing challenges, Turkey’s potential EU membership lost its appeal. At the same time, government decision-making became more arbitrary and corruption increased. The internal business environment deteriorated as it became harder for companies that didn’t have the right government contacts to operate. But economic growth continued, mostly fueled by domestic consumption. The Turkish savings rate declined while consumer debt increased. Low interest rates have directed domestic investment into sectors with faster returns, such as the real estate market. New housing estates, office complexes and shopping malls are more common than industrial sites across the country.

Meanwhile, the competitiveness of Turkish exports increased over the last 15 years to the point where Turkey is now a trusted supplier of quality consumer goods like commercial vehicles, televisions and electrical appliances. But this is also one of the reasons Turkey has been negatively affected by the global economic crisis. Exports represent 28 percent of Turkey’s GDP and most are destined for European markets. Germany is Turkey’s most important European business partner. It is not only the top export destination but also the source for most foreign investments in the country. Germany is also Turkey’s most important European source of imports. Considering Turkey’s geographic position, an extended free trade agreement with the EU and Turkey’s low-cost labor force, German companies often set up shop in Turkey, where they assemble goods that are later exported to Asia or the Balkans. All this makes Turkey vulnerable to both EU and German economic problems. The declining value of the lira could actually help Turkey, as its exports will become cheaper. The problem is that Turkey will need to find new markets for its products – no easy task, considering that 2016 marked the weakest performance for global trade since the 2008 financial crisis, according to the World Bank, and there’s little indication things will get significantly better in coming years.

Turkey has also become a top tourist draw over the last decade, ranking as the world’s sixth most visited destination in 2014. The tourism sector accounts for 12.5 percent of GDP and 8.3 percent of employment in the country. However, the sector had its worst year in 2016. After Turkey shot down a Russian military jet that violated Turkish airspace in November 2015, Russian President Vladimir Putin told Russians to holiday elsewhere, resulting in a 95 percent drop in the 4.5 million Russian tourists who visit Turkey yearly. The events surrounding the attempted coup and increased terrorist activity have also contributed to the decline in tourism. The sector has a direct impact on the lira – the more tourists, the higher the demand for cash, which results in an increase in the lira’s value. Considering the improving ties with Russia, Turkey’s tourist sector may see gains in the coming year. But taking into account Russia’s economic problems, long-term projections are not optimistic.

Investment has driven Turkey’s economic growth over the last 15 years. Most foreign investment came from Europe. Investment dropped after the economic crisis hit Europe – with lower consumer demand, companies saw few reasons to increase their investments, particularly in foreign countries. The global slowdown has led companies to focus more on their existing business operations and limit their expansion. The coup attempt and President Recep Tayyip Erdoğan’s push to increase his power have further worried investors. The government’s attempts to consolidate power are evidence of increased political risk. Investors are also concerned about the deteriorating security environment, and this is increasingly causing them to leave the country, putting more pressure on the lira. Investors will stop leaving and start coming back when they believe the business environment is more stable.

Domestically, Turkey is currently struggling on multiple fronts. From a political perspective, less than a year has passed since the attempted coup, and Erdoğan is trying to implement constitutional reforms that would solidify his control over Turkish politics. From an economic perspective, Turkey currently has little room to maneuver, though a weak currency can have advantages in the right business environment by increasing the competitiveness of exports. Even so, there is no easy way for Turkey to overcome these political and economic challenges. Middle Eastern countries will not fill the gap in demand – instead, they will remain the main source of security risks. Better ties with Russia will likely bring only short-term profits. The best bet remains the United States for both trade and investment, considering the U.S.’ relative stability. A stable social and security environment also is needed, which is easier said than done. These difficulties are not surprising and affect Turkey’s short-term power, but they can also be viewed as steps, albeit difficult ones, towards Turkey’s maturing as a significant power. Turkey’s short-term outlook is challenging, with more volatility to come, but in the long run its geopolitical position is relatively strong.

How the Energy World of Tomorrow Reshapes Geopolitics