The Islamic State is weakening, which indicates that we should examine the future of the declining caliphate’s sphere of influence. A weak IS will create an opportunity for other factions backed by their respective regional powers to fill the emerging power vacuum. The United States and Russia are trying to limit their exposure and secure their influence in the Middle East, but the definitive actors in Syria will be exerting influence within its borders. Geopolitical Futures has identified four major powers in the Middle East: Turkey, Israel, Iran and Saudi Arabia. The first three have a deep interest in how the different factions will reposition themselves in the post-caliphate battlespace. Turkey, Iran and Israel are already preparing for this, and we need to examine how these dynamics will affect the Levantine region.

Since last Friday, a series of events has unfolded that provides a clear window into the imperatives of major regional powers in Syria. Israel utilized air power to launch an assault on a Hezbollah arms shipment outside Palmyra, and conflicting reports have surfaced about Russian involvement with Kurdish forces in Afrin district. These reports necessitate a closer look at the goals of regional players within the Islamic State’s declining sphere of influence. 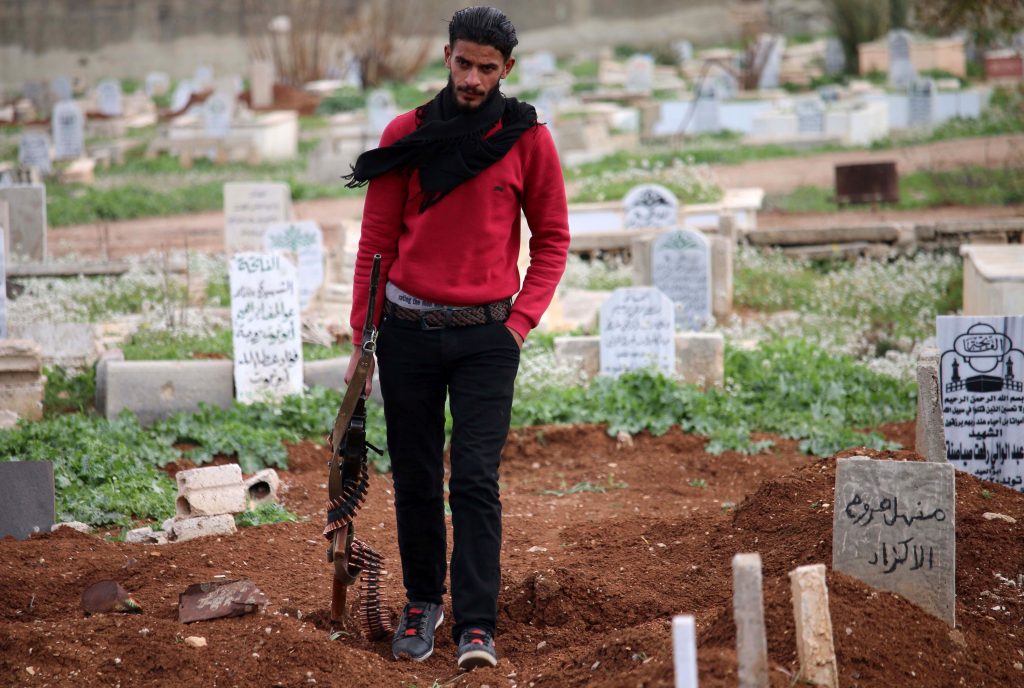 A Syrian rebel walks past graves in the rebel-held southern city of Daraa, on March 20, 2017. MOHAMAD ABAZEED/AFP/Getty Images

We will begin with Turkey’s regional imperatives. Sharing a long border with Syria leaves Turkey exposed to the spillover of the various wars taking place in the Syrian battle box. The Turks are concerned that the Syrian Kurds will be major beneficiaries of IS’ territorial losses. Ankara is already at odds with Washington over U.S. reliance on the Kurdish-led Syrian Democratic Forces. Recently, a spokesman for the People’s Protection Units (YPG) fed a story to Western media that Russia has been lending support to the Syrian Kurds through a base in northwestern Syria. Russia has denied these claims, and the United States has kept quiet. This tells us less about Russia and the U.S. than it does about the narrative the Kurds are trying to construct. They are trying to show they are an internationally supported fighting force and a legitimate state actor. The YPG is trying to appear more relevant in the face of its waning usefulness.

The Kurds have outlived their utility to the U.S., and they were never useful to Russia. In the eyes of both Russia and the United States, Turkey will have to take on more responsibility in Syria to secure its borders. The Kurds were a viable instrument to make territorial gains on Islamic State, but they are not a viable long-term partner for the U.S. or Russia. They are, however, a powerful lever in motivating Turkey.

As is often the case in geopolitics, opportunity exists alongside crisis. Turkey’s goal is to suppress Kurdish ambition, and pursuant to that, Ankara has entered ground troops into northern Syria. Turkish troop numbers are too low to act definitively, and they are attempting to achieve their goals with minimal exposure. While Turkey understands that it will not be rid of the Syrian Kurds, its ground troops are working to prevent Kurdish influence from growing. Turkey’s imperative necessitates achieving and maintaining a level of regional control in Syria. Given that Turkish troops are already on the ground in Syria, it is likely that Turkey will fill a portion of the post-caliphate power vacuum. However, Turkey is not the only rising Middle Eastern power that has ambitions in the Levant. Iran is also weighing how to proceed as IS loses its territorial holdings.

The Iranian-backed Shiite Islamist movement Hezbollah viewed the armed uprising in Syria as an existential threat. The regime of Syrian President Bashar al-Assad is a crucial actor in enabling Iranian support for Hezbollah. The regime allows Tehran to provide material and economic support to its proxy in Lebanon. Had the Syrian regime been overthrown, the pro-Iranian Shiite state in Iraq would have become vulnerable as well to a cross-border Sunni movement. This is why Iran has continued to support the Assad regime and the Syrian Arab Army throughout the crisis in order to maintain its sphere of influence on its western flank.

Between the regime’s recent victory over rebels in Aleppo and the impending collapse of the IS capital in Raqqa, Iran is hoping to see a major return on its military, economic and political investments in Syria since 2011. More than that, Hezbollah is looking forward to emerging victoriously from the bloody civil war in which they are currently mired. Hezbollah and Iran will benefit from the decline of the Islamic State, but those gains serve to unnerve Israel.

From Israel’s point of view, Iranian influence in Syria through Hezbollah must be stopped. While steering clear of direct involvement, Israel has kept a close eye on the evolving Syrian civil war, especially in terms of how the conflict could potentially allow Hezbollah to become a bigger threat to Israel. Various Sunni jihadists (IS, al-Qaida and most of the rebel groups) are rhetorical enemies of Israel, but in practice, they have more pressing objectives. Hezbollah is an institutionalized force that has shown an ability to disrupt Israel, as in the 2006 war. This is why the Israeli Defense Forces have from time to time carried out airstrikes in Syria to ensure that Hezbollah does not get its hands on more sophisticated weaponry, especially missiles that can threaten Israeli air superiority.

To this end, Israel recently carried out airstrikes on a weapons shipment convoy outside Palmyra. This is the deepest Israeli strike to date in Syria. However, the attack’s target was an arms shipment headed to Hezbollah’s stronghold in Lebanon. While Israel does not want to fill the oncoming power vacuum, it has to manage threats from the Iran-allied Hezbollah. Hezbollah already occupies considerable space in Lebanon to the north of Israel and has recently proved it is able to use Syrian space to arm itself. Israel will continue to manage threats from afar while keeping tabs on Hezbollah’s presence in Syria.

Islamic State is in danger of losing its territorial holdings in Syria and Iraq. This does not, however, mean an end to conflict in the region, nor does it mean an end to Sunni Islamist extremism. GPF recently reported on bombings in Damascus carried out by Hayat Tahrir al-Sham, the third incarnation of Jabhat al-Nusra, the Syrian branch of al-Qaida. Different militias are engaging in an intra-Sunni struggle to emerge as the jihadist vanguard in the wake of a weakened Islamic State. However, the non-Sunni forces will play a greater role in shaping the future outlook of the Syrian battlespace. These include the Kurds, the Syrian regime and Hezbollah. All of these powers will in turn shape the behavior of the main regional stakeholders, Turkey, Iran and Israel.

If and when IS is decimated, it will only end the current episode of the war radiating out of Syria and Iraq. We have discussed some of the dynamics emerging from a weakened Islamic State, but the oncoming power vacuum will inevitably be filled by conflicting regional and international forces vying for control of the post-caliphate Middle East.