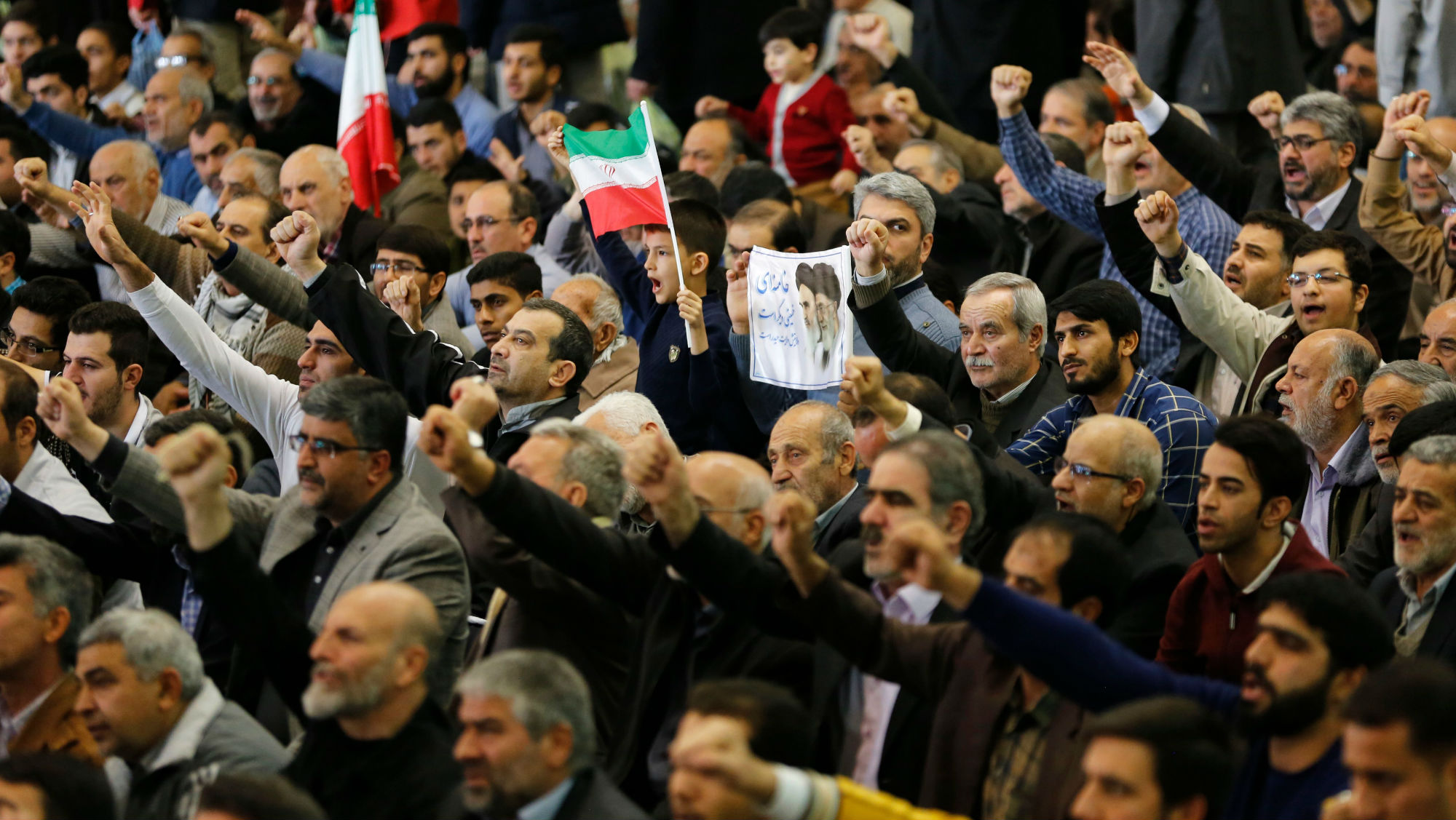 The protests that broke out throughout Iran late last month have dissipated and, it seems, things have largely returned to normal. But while the regime was able to put down the unrest, it has been unable to address its underlying causes, which are being exacerbated by a combination of domestic economic problems and internal and regional security concerns. The lack of economic opportunities, combined with frustration over the regime’s continued spending on its own defense and foreign interventions in places such as Syria, Lebanon and Yemen, set off the demonstrations that continued into the new year. Now the regime has a choice to make: Increase spending on domestic economic initiatives that address the concerns of the population, or maintain the strength – and loyalty – of the security apparatus that ensures the regime’s very survival. Both options come with drawbacks, none of which the regime can take lightly.

The regime in Iran has a history of suppressing protests and making small concessions to try to relieve the pressure caused by the demonstrations. Its response to the most recent protests is no different. A leaked version of the 2018 budget sparked anger in December over funding for the Islamic Revolutionary Guard Corps and cuts to public subsidies. (Ninety-five percent of Iranians receive such subsidies.) The regime has thus made changes to the budget, and they appear to address some of the concerns: the planned cuts to cash subsidies will now target higher income earners; a hike in fuel prices that was in the initial budget has been eliminated; and the government will set aside $3.3 billion to cover 2 million to 3 million depositors affected by unregulated credit institutions.

But Ayatollah Ali Khamenei also allocated $2.5 billion of the country’s National Development Fund – which was estimated to have $68 billion in assets in 2016 – for additional defense spending. Why would Iran continue to increase defense spending if it was the perception of a privileged IRGC – an institution that got more funding while subsidies for average Iranians were slashed – that set off the protests in the first place? The short answer is Iran has no other option. It’s facing increasing security risks both at home and abroad, and it can’t afford to let its security institutions go underfunded.

Further complicating the situation are the divisions within the regime itself that are being exacerbated by the increasingly apparent socio-economic problems. To increase his own support base, President Hassan Rouhani is using the recent protests as evidence that the policies of the clerical elites, the main backers and beneficiaries of the IRGC, have failed. Khamenei, who is part of the clerical establishment, has cautiously acknowledged the concerns of the protesters but remains focused on strengthening and funding the IRGC to ensure its loyalty lies with the clerics.

At the same time, Khamenei instructed the IRGC last week to divest large portions of its business interests, which represent a substantial portion of the Iranian economy – 30 percent by some estimates. The IRGC became increasingly involved in the management of the Iranian economy following the Iran-Iraq war, when critical infrastructure needed to be rebuilt. Khamenei’s reasoning for wanting the IRGC to withdraw from the economy is two-fold: First, it attempts to address some of the protesters’ concerns by decreasing the IRGC’s economic power, but without actually defunding it. Second, and more important, privatization is seen as a step toward increasing transparency and, therefore, attracting more foreign investment, which remains at risk due to uncertainty over U.S. commitment to the nuclear deal. Either way, divestment could create even more internal divisions, both between the clerics and the IRGC and also within the IRGC itself, because the organization’s leadership is split on whether to support the move.

The external pressures on Iran come from various sources but meet in one location: Syria. President Bashar Assad, an Iranian ally, is facing new challenges in western Syria. Turkey has invaded the northwestern Afrin region, and given the size of the Turkish force, its technological superiority and the relatively small number of Kurdish defenders, it seems likely that Turkey will take control of it. And with that, Turkey will have essentially surrounded Aleppo, Syria’s largest city, on three sides. Turkish President Recep Tayyip Erdogan has also threatened to move on the city of Manbij, east of Aleppo, and if he were to follow through on this threat – which we haven’t seen any signs of yet and which is unlikely because the U.S. still supports the Kurds in this region – Turkey would essentially have encircled Aleppo. 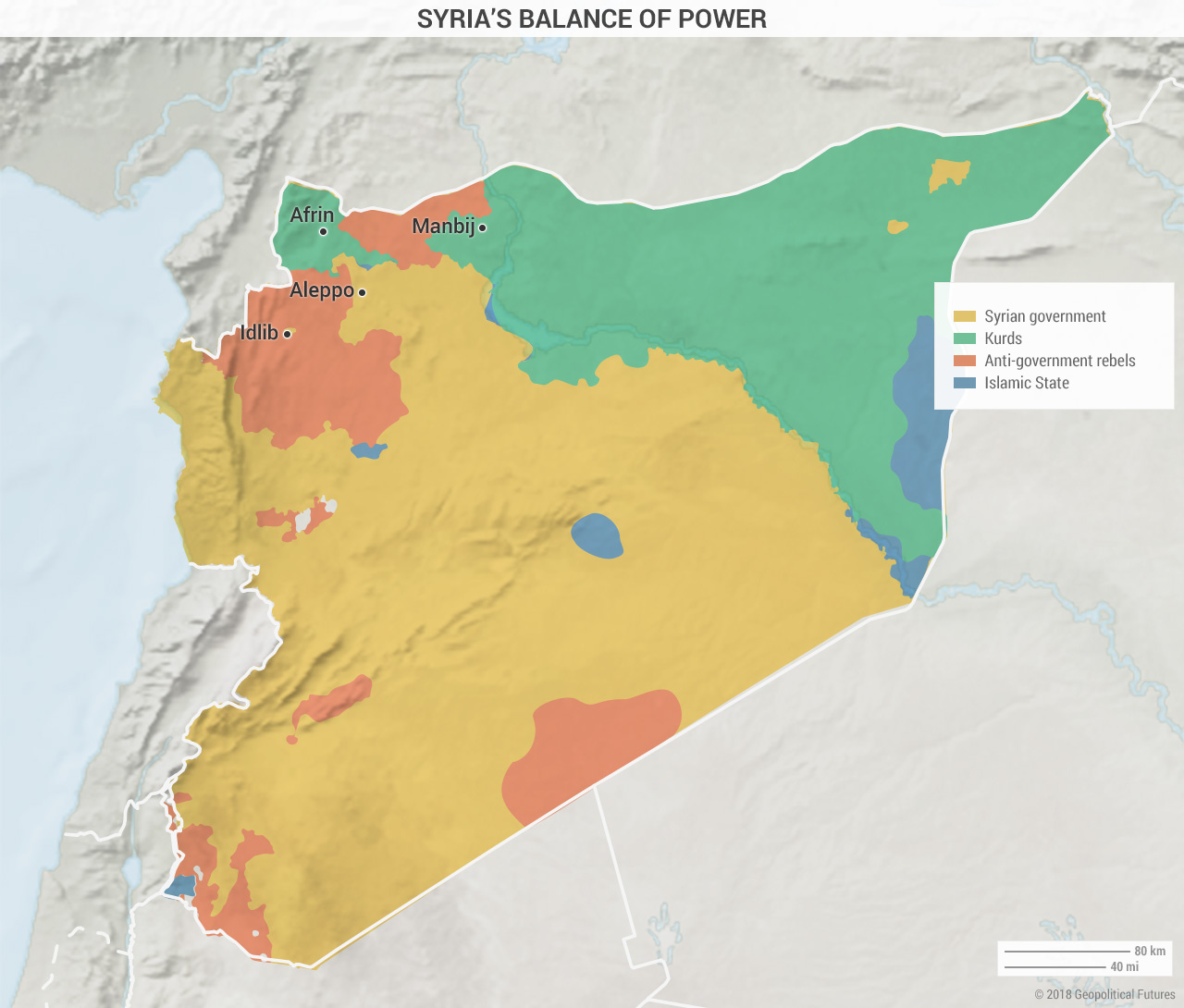 But even if it doesn’t make a move on Manbij, surrounding most of Aleppo with Turkish forces would present a major threat to both Assad and Iran. Iran has to consider the risks that a resurgent Turkey would pose to it and will therefore be highly motivated to keep its proxies in Syria and Iraq. Containing Turkey to northwestern Syria is cheaper and safer than trying to fight off Turkish troops in eastern Syria, assuming that they’re able to advance that far. But if Turkish-backed Sunni Arab forces can take control of eastern Syria – the areas that IS used to dominate – then the Iranian position in Iraq becomes vulnerable. A coalition of Sunni groups in eastern Syria can support the Sunni minority in western Iraq, which would be a threat to the Shiite-dominated regime in Baghdad. Given Russia’s at least tacit cooperation with Turkey in Afrin – allowing it to use Syrian airspace to bombard Kurdish defensive positions – Iran knows that it can’t depend on Russia to achieve its security objectives. (In fact, a recent article in Daily Kayhan, a conservative Iranian paper, discussed Russia’s and Iran’s diverging interests in Syria.) The burden will fall on Iran to help Assad defend Aleppo, and that will come at a cost.

Closer to home, the IRGC clashed with 21 Islamic State militants in western Iran on Jan. 27. Iran believes that the fighters emerged from hiding in Kurdish-held areas of Syria, although it doesn’t seem to believe that the Kurds were assisting the militants. The Islamic State has lost most of its territory in Syria, but that doesn’t mean IS fighters have all left the country – they have simply blended into the local population. This was a small skirmish – although three Iranian soldiers were killed – and the IRGC was able to defeat the militants. IS suicide bombers and gunmen attacked Tehran in June, but this was the first time an organized IS militia has attacked Iran, driving home the fact that Iran is still at risk within its borders. The growing IS presence in Afghanistan, a country that shares a border with Iran, is also a concern.

While Iran has emerged from the Syrian civil war in a strong position relative to its regional adversaries, its social and political stability has been shaken. Eventually, Iran will be forced to make a choice, and this will limit its foreign adventures just as Turkey, its longtime nemesis, increases its power and its involvement in Syria, presenting an ever greater challenge to Tehran.