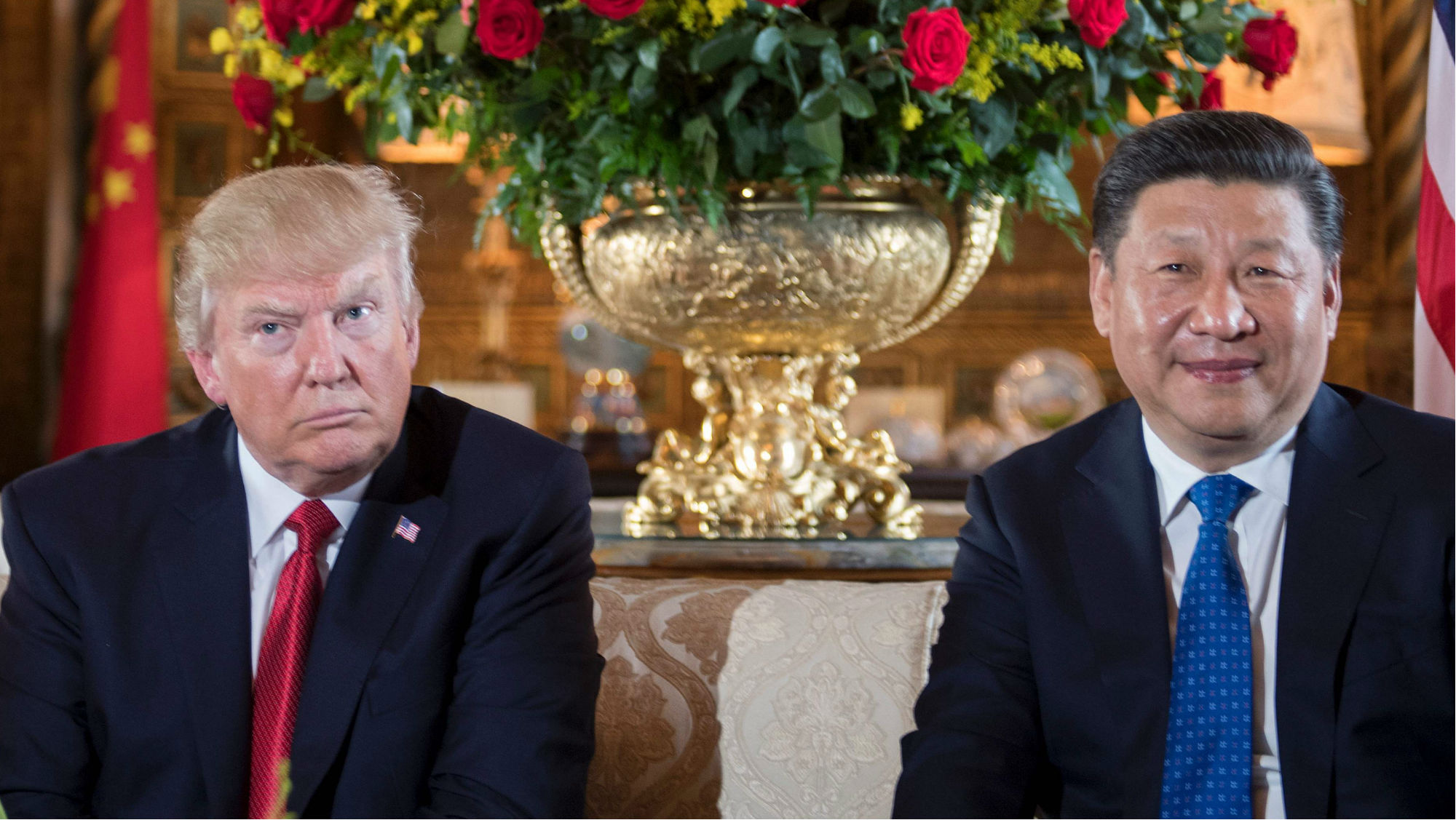 Last April, U.S. President Donald Trump hosted Chinese President Xi Jinping at his resort in Florida. It was an auspicious meeting. During the summit, Trump agreed the U.S. would take it easy on China when it came to trade relations in return for help solving the North Korea crisis. Trump also excused himself at one point to authorize punitive missile strikes on Syrian President Bashar Assad’s regime, returning to the dinner table to tell Xi what had just happened, as if to disabuse him of any notion that Trump is a paper tiger. And, he noted, they shared “the most beautiful piece of chocolate cake you’ve ever seen.”

Roughly two weeks later, Trump did something that garnered far less attention but that was far more important. On April 19, the Department of Commerce initiated an investigation into whether foreign imports of steel threatened U.S. national security. The next day, Trump signed a memo urging that the investigation be carried out “expeditiously.” A week later, Trump expedited an investigation into the national security implications of U.S. imports of aluminum. It took a little less than a year, but the Commerce Department concluded its investigations on Feb. 16 – and the results give Trump significant new powers. The immediate effect of the Commerce Department’s conclusions will give Trump wide-ranging powers when it comes to U.S. imports of aluminum and steel.

The words and the choreography actually matter here. A U.S. president does not have the authority to levy tariffs or set import quotas by virtue of being president. On the contrary, the president must be authorized to make such a move. The previous administration provides a useful example. In September 2009, former President Barack Obama slapped a 35 percent tariff on Chinese tires. Obama was able to do so only because a union had petitioned the United States International Trade Commission, which subsequently ruled that U.S. tire manufacturers had been materially injured by unfair Chinese trade practices related to tires. Obama followed the USITC’s recommendation and imposed the tariffs. That is a lot of hoops to jump through.

The Trump administration came into office promising significant changes in U.S. trade policies. Thus far, the administration’s policies haven’t been materially different from those of past administrations, but it has not been for lack of desire. When Trump met with Xi last April, he had little choice but to craft a face-saving compromise on North Korea because Trump had no way to follow through on his economic threats. What Trump needed more than anything was to buy time for his administration to create the tools necessary to follow through on its threats. In effect, Trump set Xi up. If Xi followed through on North Korea, Trump could claim success for solving the North Korea issue. If Xi didn’t follow through, Trump could enact punitive trade measures and use Xi’s failure to underscore the threat China poses to U.S. national security.

The Constraints of Reality

A point we have returned to over and over is that leaders are constrained by reality, and that the constraints on U.S. presidents in particular make them some of the weakest leaders in the world in terms of pursuing their own agendas. Until now, Trump’s policies on trade have been a particularly good case in point. Trump has well-defined views on U.S. economic policy, but he has not held the power to implement his views. Trump’s Republican Party may have control of both houses of Congress, but much of his party still supports free trade, which means he cannot legislate his desires into law, and without Congress, a U.S. president can do relatively little in this realm. This is why the Commerce Department investigations are so important. They allow Trump to bypass Congress – by design one of the presidency’s biggest constraints – by concluding that U.S. steel and aluminum imports “impair the national security.”

The use of that phrasing is particularly important. Section 232 of the U.S. Trade Expansion Act of 1962 gives the president power to adjust U.S. imports however he wants and for as long as he deems necessary so that the imports do not “threaten to impair the national security.” The upshot of the Commerce Department’s conclusions is that Trump now has that power in relation to U.S. imports of aluminum and steel – with one important caveat. If Trump goes forward with some of the Commerce Department’s recommendations, they can still be challenged in court. And though the Supreme Court has in the past upheld the authority of the president to implement Section 232 in a broad and fairly unrestricted manner, though much more limited in scope, no president has put the law to the test the way Trump might. Steel and aluminum are important test cases for just how broadly one can define the phrase “national security.”

Most media reporting is portraying the Commerce Department’s recommendations as the first potential salvo in a U.S.-China trade war – and the Chinese Commerce Ministry’s immediate reaction, threatening retaliation, did nothing to dissuade this interpretation. But the U.S. actually does not import much Chinese steel. According to the latest data (from the third quarter of 2017), the top three sources of U.S. imports of steel are Canada, Brazil and South Korea. In fact, China isn’t even in the top 10. The story is a little different when it comes to aluminum, however. China is the second-largest source of U.S. aluminum imports, and the U.S. accounts for 18 percent of China’s aluminum exports – a significant but hardly overwhelming share.

The deeper problem is not U.S. imports of Chinese steel and aluminum, but that China is producing such vast quantities of steel and aluminum, driving global prices so low that U.S. companies cannot compete. The sheer scale of Chinese production of steel and aluminum is mind-boggling. In 1967, China produced 2.1 percent of the world’s steel. In 2016, it produced 49.6 percent. The data for aluminum doesn’t go quite that far back, but in 1999, China produced 11 percent of the world’s aluminum. Last year, it produced 56.7 percent. Even the significant powers Section 232 can confer do not give Trump a magic wand to increase prices or compel China to curb production because from China’s perspective, making cuts like that is a matter of its own national security.

While China’s market share increased slowly as Deng Xiaoping’s reforms took root in the 1970s and 1980s, China’s global share of production rose significantly around the time of the 2008 financial crisis, when China relied on massive amounts of stimulus to keep its economy from crashing due to a decline in demand for its exports. China did not want to lay off workers, so it kept producing steel that no one needed, building ghost cities that no one could afford to live in and giving loans to companies that weren’t profitable enough to pay workers. The fairly superficial cuts China has made in industries like steel, coal and aluminum pale in comparison to the quantities China continues to flood the global market with, and China has no incentive to stop producing steel and aluminum at those levels for fear of what it could do to the Chinese economy. As long as that is true (and even if Xi’s reforms are wildly successful, it will be true for many more years), there is not much the U.S. can do by itself. It would take a global boycott of cheap Chinese steel and aluminum to move the needle – not a few impressive sounding tariffs.

The Trump administration is not the first to notice the trend of Chinese oversupply, nor is it the first to attempt to enact tariffs and set quotas to combat it. Previous administrations, Democratic and Republican alike, also attempted to address the problem. What makes the Trump administration unique is that it would be the first to use Section 232 as a way to solve an oversupply problem driven by China, or, in layman’s terms, the first to make this an issue of national security and not simply economic policy. The Trump-Xi agreement on North Korea and the release of a National Defense Strategy identifying China and Russia as America’s most significant geopolitical rivals now seem like intentional moves to cast China as a national security threat so serious that powers should be granted to the U.S. president to protect key industries to combat the threat. No more multiyear protestations at the World Trade Organization – instead, harsh tariffs and import quotas from the White House itself.

Impact on Other Countries

Lost in all this is the impact it could have on countries other than China. Take Canada, for example, which is currently engaged in turbulent negotiations with the U.S. and Mexico over reforming parts of NAFTA. Canada could stand to suffer greatly if Trump follows through on some of the Commerce Department’s recommendations, such as a 24 percent tariff on all U.S. steel imports. (The U.S. share of Canadian steel exports is a whopping 83.7 percent, to give a sense of the challenge such a move would pose.) A Trump decision to impose a quota of 86.7 percent on all aluminum imports would hurt China and Russia, but it would hurt Canada far more, and would also cause pain for countries like the UAE, Mexico and Germany, to name just a few U.S. allies and partners. Mexico in particular has a lot to lose if the U.S. pursues a hard line, considering that Mexico has become a common resale market for cheap Chinese exports like steel and aluminum.

There is still a long way to go domestically – Trump has to choose what policies, if any, he wants to enact, and that choice, in turn, has to be upheld by the judiciary in the inevitable lawsuits that would follow. But what is clear now is that Trump will try to use access to the U.S. market as a weapon against enemies and leverage over allies. Using an obscure law to make economic policy a matter of national security during peacetime (or relative peacetime) is a profound shift in how the U.S. interacts with the global economy, and while it might lead to boosts in certain industries at home, it won’t put a dent in the underlying problem of low prices caused by global oversupply. Even so, it gives Trump significant powers over two major industries, and if it proves to be a successful template, the administration may seek even more wide-ranging powers. Beijing is no doubt alarmed – but so are Ankara, Ottawa and Brussels.