For many years, Afghanistan was stuck in a stalemate: the Taliban were not losing and the Afghan government was not winning. Judging from the daily reports coming from Afghanistan, especially during this past year, one can’t help but infer that the Taliban are now on a winning streak. Part of this shift is a result of the NATO drawdown, since Afghan security forces on their own are not able to counter the jihadist insurgents. Since the United States is not going to deploy the forces needed to reverse this trend, we have to begin considering a scenario in which the Taliban could overwhelm the Afghan state.

On Oct. 8, the commander of U.S.-led NATO forces in Afghanistan, Gen. John Nicholson, along with Afghanistan’s defense minister, Gen. Abdullah Habibi, and interior minister, Taj Mohammed Jahid visited Lashkar Gah, the capital of Helmand province. Nicholson reportedly said that Afghan security forces supported by NATO troops foiled Taliban attempts to gain control of large cities in various provinces. But this visit comes at a time when the Taliban have taken control of half of the 14 districts in Helmand and the jihadist movement enjoys a great degree of influence in the remaining seven. The provincial capital faces the possibility of falling to the insurgents, who are attacking from at least three directions.

The situation in Helmand is understandable – considering that it is a major part of the Taliban’s core turf in the south. As we explained in our Sept. 15 Deep Dive the Afghan security forces are struggling against Taliban militiamen across the country and in areas dominated by ethnic minorities (Tajiks, Uzbeks, Hazaras, Turkmen, etc). Last week, Taliban fighters seized control of many parts of the northern city of Kunduz for the second time in almost a year and according to the latest reports they have not been fully dislodged from the city. Even pushing them out of the city wouldn’t be considered a huge success because the Taliban control much of the province, also called Kunduz.

The Taliban have actually been gaining ground in many provinces that share a border with Central Asian nations. On the same day that Nicholson visited Helmand, dozens of Afghan security forces surrendered to the Taliban at a base in the Morichaq area of Bala Murghab district in Badghis province, near the border with Turkmenistan. According to reports, the Taliban are eyeing the southwestern province of Farah (along the border with Iran) where there has been an increase in fighting. In another noteworthy development, Afghanistan’s private TV channel Shamshad reported on Oct. 6 that the Taliban have managed to penetrate the Hazara Shiite community in Bamyan province, where they have established a branch. 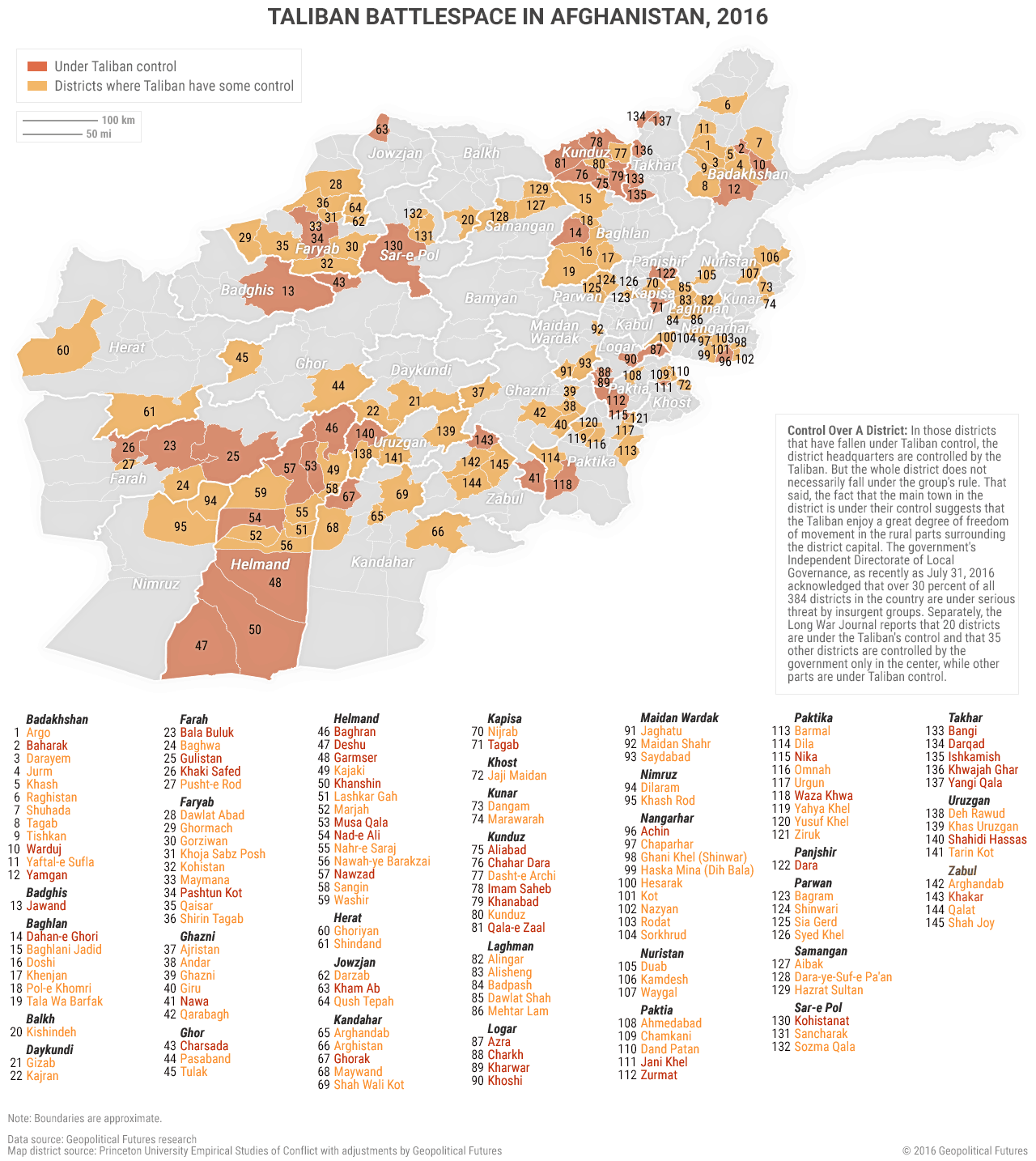 While the Taliban are making these advances in different parts of the country, a major conference was held in Brussels on Oct. 5 where world powers pledged over $15 billion in financial aid to Afghanistan until 2020. Seventy percent of Afghanistan’s annual income comes from international donors, and a little over 40 percent is spent on security. The international community can continue pumping billions into the southwest Asian nation, but it will be useless if the government is not able to use these resources to create a functioning state. Certainly, this has not happened in the 15 years since the foundations of the internationally backed Afghan republic were laid in the Bonn Conference in 2001.

The power-sharing arrangement crafted by U.S. Secretary of State John Kerry two years ago, following the controversial presidential elections in 2014, is now in tatters. The deal that the national unity government created, with Ashraf Ghani as the president and Abdullah Abdullah as the chief executive, expired on Sept. 29 – without fulfilling any of the conditions that were agreed to. A key reason the Taliban are ascendant is because their opponents have not yet been able to sort out their differences. At a time when Kabul should be focused on the fighting and negotiating with the Taliban, it is still dealing with issues that pre-date the Taliban’s founding.

The government just concluded a peace agreement with Hezb-i-Islami (led by Gulbuddin Hekmatyar), which was the most powerful Islamist rebel faction during the war against the Soviet Union-backed Marxist regime during the 1980s and early 1990s. The inability of Islamist factions to establish a power-sharing agreement and the ensuing intra-Islamist civil war led to the rise of the Taliban. Hekmatyar stood apart from both the Taliban and the other factions throughout the Taliban’s stint in power from 1996 to 2001. Though some of his people joined the Afghan state built by the West, Hekmatyar’s faction continued to boycott the post-Taliban regime until the Sept. 29 agreement.

This deal finally brings together all those who fought against the communists a quarter of a century after the ouster of the Marxist regime. But at a time when the government is losing ground to the Taliban, it has reached an agreement with a group that has a negligible role in the insurgency. At the Brussels conference, Kerry described the accord with Hekmatyar as a model for reconciliation with the Taliban. His remarks, like Nicholson’s, are divorced from the reality on the ground.

The deal with Hekmatyar went through because he was tired of being on the outside and because the Afghan state is desperate to show progress and gain the support of a Pashtun faction in a bid to weaken the Taliban. The Taliban supplanted Hezb-i-Islami over a generation ago. Furthermore, in sharp contrast with Hezb-i-Islami, the Taliban have almost no incentive to negotiate any time soon as their forces are gaining ground. Moreover, why would they join a system that has not demonstrated any staying power?

Despite massive assistance from the United States and the West, the Afghan government is still unable to function. Even if we were to dismiss the factionalism among the Taliban’s opponents as politics as usual, it is undeniable that the Afghan state is losing on the battlefield. Something has to drastically change for the current trend to reverse.

One of two things must happen: Either Afghan security forces must gain the organizational strength required to turn the tide against the Taliban or the United States must deploy hundreds of thousands of troops to counter the Taliban insurgency. The latter is extremely unlikely to happen, considering that the United States is not even deploying many forces in Syria and Iraq where the stakes are far higher than in Afghanistan.

Even if the U.S. committed the forces required, the best-case scenario is that the U.S. will hold the line for a few years, after which the Afghan government will be expected to take over. Kabul is unlikely to develop the military capabilities needed to defeat the Taliban. It has not done this so far, even after investing 15 years and over a $100 billion. The Afghan regime is not going to fall any time soon. But that’s not what matters.

Kabul has not been able to function on its own and now the Taliban are steadily decreasing the scope of its writ. Such a balance of power in favor of the latter has implications for the region. Already bogged down with so many other issues, Pakistan and Iran will be the first ones to feel the heat. Then, Central Asian countries, which are already unraveling internally, will be next.