I had never expected to use those letters as the title of something I wrote, but as I sat here thinking, I realized that anything else wouldn’t capture the moment. For those who might be offended, WTF stands for “well, that’s fine.” (And for those of you who thought otherwise, shame on you.)

There are two major candidates running for president. One has been accused of collaborating with the Russian president and his intelligence service. He is on tape claiming that he can have sex with anyone he wants. Donald Trump lost almost a billion dollars one year, and has indicated that he paid no taxes since that loss. That’s not illegal, but certainly indicates he didn’t make as much money as he claims, since a billion-dollar loss knocking out 15 years of taxes doesn’t get you to $10 billion. And I leave out the various other things he said and meant.

On the other side, we have a candidate who, for reasons never explained, used a private server for classified messages. She and her husband also ran a foundation, while she was secretary of state, where it appears that charitable fundraising, meetings at the State Department and making substantial amounts of money for themselves intermingled. And finally, the FBI has found thousands of emails concerning her on the computer of a man who sends pictures of his private parts to women and whose wife is Hillary Clinton’s top aide. And I leave out the things she has said and has not meant. 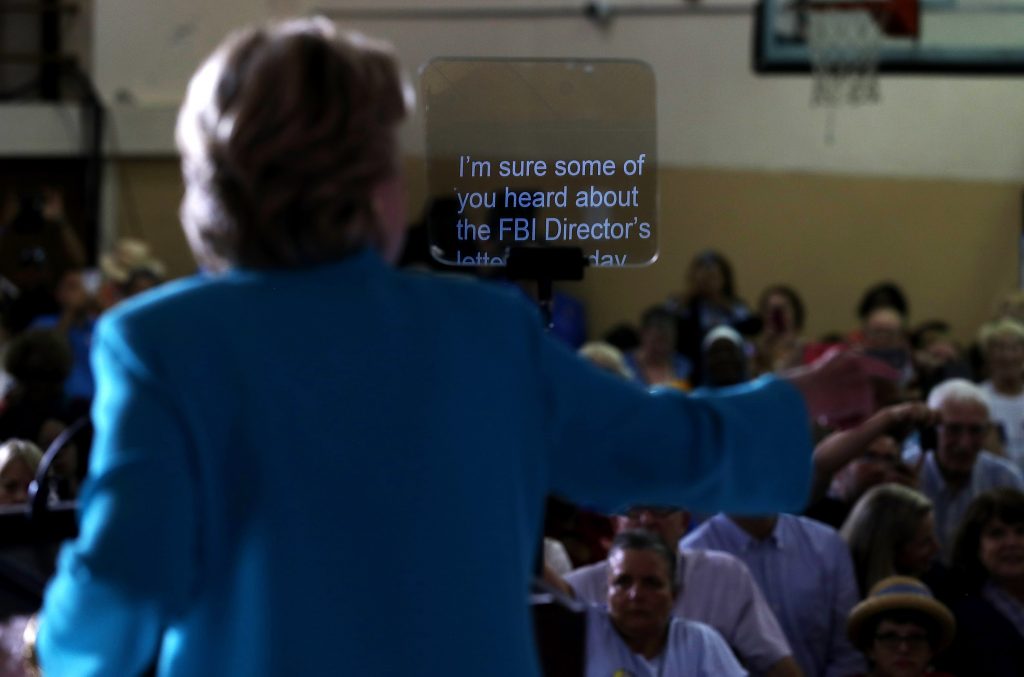 If I use reason to untangle the latest event – FBI Director James Comey’s letter to Congress – I come up with the following. He is fully aware of the consequences of what he did and that it could change history. Since he is not an idiot (FBI directors can be strange, but not stupid), he did this deliberately. That would indicate that he has found something that will shortly be revealed and could disqualify her as president. He did it now because if she were elected and then this came out, we would face an impeachment paralyzing the government in a time of war. So he fired his first shot on Friday, and more will come shortly.

Reason may not work here. Another explanation might be just as he said. He has no reason to think that the emails are even from Clinton, but he felt that it would be nice to keep Congress in the loop, so he told them he was reopening the case to keep everybody on the same page. He didn’t notice it was 11 days before the election or think this announcement would affect it. Whichever explanation, we are a week away from the election, and the degree of strangeness is amazing. This is not the worst election in history – that has to go to the election of 1860, which started the Civil War.

The oddest thing is the similarity between the two candidates. The difference is that Trump is profoundly inarticulate. Clinton is articulate, in the way that people who use the term “messaging” are articulate. But beneath the surface they strike me as the same. Neither believes in anything beyond what is of use at the moment. Neither is embarrassed by anything. It was once said about Kurt Waldheim, who was a former secretary-general of the U.N. among other things, that he had no backbone, but was kept upright by his thick skin. They say Trump has a thin skin. He has taken a lot of fire without being deterred. As for Clinton, she is no more capable of being ashamed than Trump.

Neither seems to believe that laws and social norms apply to them. And neither knows how to close off an ongoing issue with a simple admission of error, a clear explanation of how that error occurred and a profound apology. Trump can barely get the word sorry out of his mouth. Clinton will say it more easily, but less believably. Clinton can get out of this current problem by doing two things. One, explain coherently and believably why she set up the server. Two, come clean on why she deleted 33,000 emails. She won’t, either because she can’t reveal the truth or because she can’t utter it.

I still believe the Republic will survive either candidate. It doesn’t matter who wins. The problem is not their policies and flip-flops. I don’t care about those. I have always argued that character is more important than policy. The president’s policies are unimportant, because the most important things he or she will face will be totally unexpected, and there will be hours in which to make decisions with no policy paper to rely on. That is why character matters more than policies. At the crucial moments in history, a president can only go deep within himself to find the path and the courage to take it. The president may make a mistake, but if there is no depth, he will always fail.

I have studied each of these candidates and I don’t think either has the depth to govern. They are each shallow in different ways. Undoubtedly I will outrage Clinton voters for equating her with Trump and outrage Trump supporters for equating him with Clinton. I respect anyone who deeply believes in either, and I have no interest in persuading anyone of my nihilistic view.

The Geopolitics of Heartbreak