Geopolitical Futures’ 2017 forecast for Venezuela has begun to accelerate over the past five days. Our forecast stated that the administration of President Nicolás Maduro in its current form would not survive this year. The gridlock that characterized 2016 will reach a breaking point, forcing the transformation of Venezuela’s government in 2017. Such a transformation would mark the end of populist, anti-American rule in the country since 1999. In addition to leading the regional populist movement that swept through South America in the decade after that, the country is also home to valuable oil reserves strategically positioned to influence control of maritime routes – including a portion related to the Panama Canal – entering and leaving the Caribbean Sea. A previous Reality Check on Venezuela explained in detail why the status quo is not sustainable. Recent events now offer the opportunity to discuss the different ways this transformation could occur.

Between March 28 and 29, Venezuela’s Supreme Court published rulings 155 and 156, which removed legislators’ immunity, suspended the National Assembly’s powers, usurped functions normally belonging to the National Assembly, and increased the president’s unilateral powers in certain areas. The court rulings outraged members of the local opposition, drew criticism from regional organizations, and prompted foreign governments throughout the Americas to publicly condemn the actions. On the morning of March 31, Venezuelan Chief Prosecutor Luisa Ortega Díaz said the Supreme Court rulings violated constitutional order. Later that night, Maduro met with the National Defense Council and the president of the Supreme Court, who then jointly called for a revision of rulings 155 and 156. On the morning of April 1, the Supreme Court said it had reversed the controversial rulings. 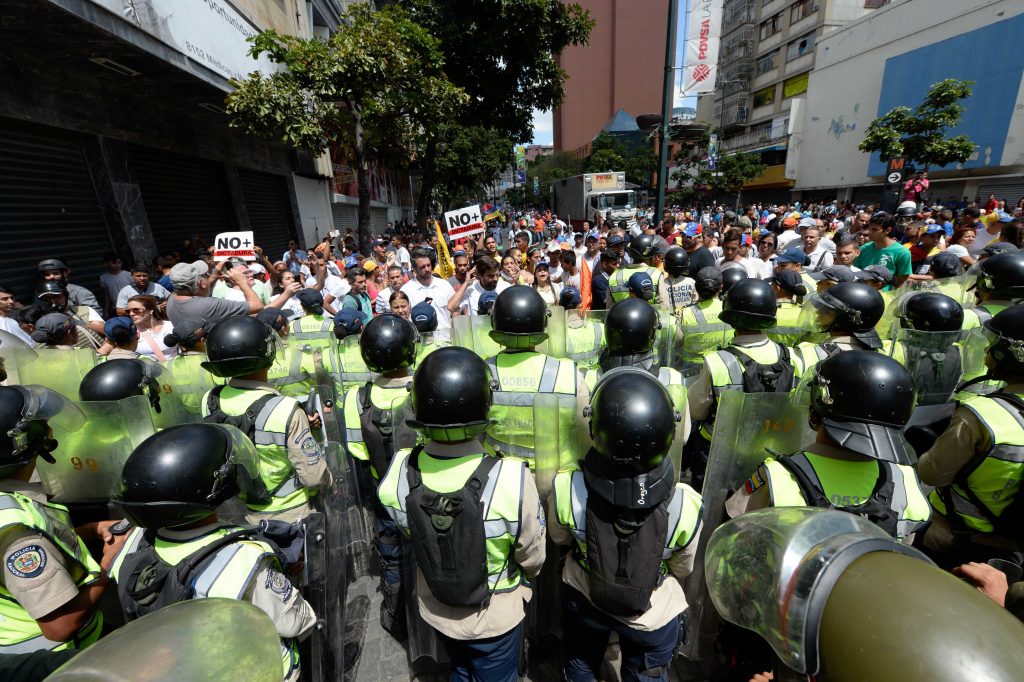 Venezuelan opposition activists take part in a protest that is blocked by the National Guard against the government of President Nicolás Maduro at the Francisco Fajardo Highway in Caracas, on April 1, 2017. FEDERICO PARRA/AFP/Getty Images

The first thing to understand in all of this is that neither the March 29 ruling against the National Assembly nor the April 1 reversal has critically impacted the dynamics of domestic politics in Venezuela. In January 2016, members of the opposition took control of the National Assembly, breaking the Maduro administration’s monopoly over the four branches of government. Maduro controls three branches – the executive, the judicial and the citizens’ – while the opposition has controlled the legislature. Since Jan. 2, 2016, the Supreme Court has issued various rulings to undermine the National Assembly’s power in conjunction with other government bodies to create obstacles for the opposition. For this reason, the court’s rulings last week were high-profile expressions of political practices that have been in place for the past 15 months.

The recent Supreme Court controversy reveals Maduro’s growing weakness and declining power. It was either an attempt to grab power or a PR stunt. If it was a move to consolidate power, Maduro failed. Domestic and international backlash was too great for Maduro to enforce the court rulings. It is also possible that it was a strategic publicity stunt orchestrated by the government. In this scenario, Maduro never intended to maintain the rulings. Rather, the move created an opportunity to publicly demonstrate that he is not a dictator by returning power to the branch of the government led by the opposition. This reflects a need for Maduro to rally popular support and to renew his government’s legitimacy, which cannot be done via elections. In practice, the National Assembly’s status remained unchanged because the Supreme Court and other government bodies can continue to impede the Assembly from taking action case-by-case. Either scenario points to the geopolitical reality: The Maduro administration has become weaker, the underlying cause and explanation of its behavior.

As Maduro’s government continues to weaken, other political factors will seek to take advantage of the political space to secure their interests. A multitude of forces and players can cause a transformation in the Venezuelan government this year: opposition parties, the military, international third parties and public unrest. Geopolitical forecasting does not involve being psychic or stating the specific day and time a particular event will occur. Rather, it allows us to identify forces at play, their strengths relative to each other, the ability to determine which forces will prevail, and a general sense of how long it might take.

Early presidential elections, called for by opposition parties, in many ways present more challenges than solutions. The National Electoral Council (CNE) and a lack of unity among opposition parties create two major obstacles to presidential elections. In 2016, the opposition’s main strategy to depose Maduro was to hold a public referendum to oust him from office and trigger presidential elections. The CNE prevented this from happening by manipulating bureaucratic procedures. Similar obstacles should be expected for any calls to hold elections this year. Maduro or his replacement candidate would lose, so the government will seek to prevent elections from happening rather than lose power. At the same time, the opposition remains divided over leadership, strategy and plans to solve Venezuela’s economic, political and security problems. Without a unified front, it is difficult for the opposition to organize elections, agree on candidates and maintain the cohesion needed to govern.

The Venezuelan military has more to lose than gain from moves to overtly take state power from the government. The military already runs, or heavily influences, key components of the Venezuelan economy, such as border trade, oil activities and food importation and distribution. Many of the more senior officials reap the benefits of securing these segments of the economy for the government, but they are not seen as the cause of the vast economic problems facing the country. Some officers, especially those with ties to Socialist Party leader Diosdado Cabello, are linked to illegal activities including drug trafficking. The Maduro administration turns a blind eye to these activities.

The opposition has repeatedly called on the military to uphold the country’s constitution, encouraging military members to act against Maduro and in line with the opposition’s agenda. This is aimed primarily at junior military officers who do not share the same benefits as more senior officers. The approach of attempting to divide or win over the military is unlikely to succeed because of the huge amount of risk involved. All would be well if a military official sided with the opposition and the opposition won. However, as the Turkish coup attempt reminds us, those who challenge the government will face severe punishment if the opposition fails. On the other hand, whoever runs the country will need a military. Even if the opposition were to take control of the government, junior military members would likely be spared from any purges of top brass. Getting rid of all of the military’s active members is not an option.

Third-party international actors – the Organization of American States (OAS), Union of South American Nations (Unasur), Mercosur and individual member countries of these groups – often use strong rhetoric but rarely take action that will have an impact on the country. For months, the OAS has condemned the Maduro government and threatened to suspend Venezuela from the organization. On March 30, six of Unasur’s 12 members called on Venezuela to restore democratic order. And Mercosur already had suspended Venezuela from that trade bloc in December 2016. The problem with all of these gestures is that they remain only gestures. Suspension from the OAS would primarily affect the country’s image. The consequences are insignificant. Similarly, a suspension from Mercosur has not strongly affected Venezuela because the bloc continues to trade with the country. Mercosur agreements technically allow for the removal of preferential trade tariffs, closure of land borders, and suspension of trade, air and maritime traffic, communications and energy delivery. In practice, so far, these measures exist only on paper. Furthermore, any decision to ask for upfront payment or refusal to do business in Venezuela is based on companies protecting against losses. Unless these regional groups accompany the rhetoric with concrete actions, they will have little influence on Venezuelan politics.

Popular unrest and mobilizations will play a critical role in the transformation process. The public successfully mobilized last year for a series of street actions. These included protests of hundreds of thousands of people across the country. This group is the most motivated for change because they are suffering the most in the current scenario, facing daily shortages of food, medicine and other basic goods. More notably, they forced a response from the government, including an increased presence of security forces and closure of metro lines to restrict access to gathering points. Of all the groups confronting Maduro, massive popular movements have been the most successful thus far in creating pressure and forcing the administration to be on the defensive.

Any combination of these forces could bring about a transformation in government that we expect this year. The most likely scenario is a combination approach in which public unrest is the major engine driving the transformative process. As options for legal resolution – such as elections – become less likely and daily quality of life deteriorates, public unrest will intensify. Regardless of how these forces combine, they exist and are converging to a point of rupture this year, which will result in the breaking point for Maduro and his government. For the first time in nearly two decades, the United States and others in the region will have the opportunity to reset relations with Venezuela.

What Moscow Really Wants From Venezuela

Brazil and France, at Loggerheads on Trade