There is no denying that Venezuela finds itself in the midst of an economic and political crisis. On Jan. 23, the South American country will make headlines with nationwide anti-government protests. Our 2017 forecast states that the government of President Nicolás Maduro in its current form will not survive because the status quo in the country is unsustainable. We expect the breaking point to arrive this year, but we do not believe the Jan. 23 protests will bring it about. However, the groundwork for its fruition is already being laid, and marking the baseline at the start of the year will be helpful for tracking its evolution.

The economic crisis stems largely from Venezuela’s dependence on oil revenue and heavy social spending. Approximately 95 percent of Venezuela’s foreign currency comes from oil sales, and the World Bank’s latest figures (from 2012) show oil rents account for 23.8 percent of GDP. After overestimating the price of oil in 2015 and 2016, the Venezuelan government projected the price per barrel at $30 in its 2017 budget. According to March 2016 figures from Rystad Energy, the cost of producing a barrel of oil in Venezuela was $27.60. In other words, the government’s budget estimates a roughly break-even oil price. In addition, Venezuela pledged to OPEC that it would reduce 2017 production by 4.5 percent to just under 2 million barrels per day. Without a substantial rise in oil prices to pre-2015 levels, which GPF does not expect, lower production will also mean less oil revenue. 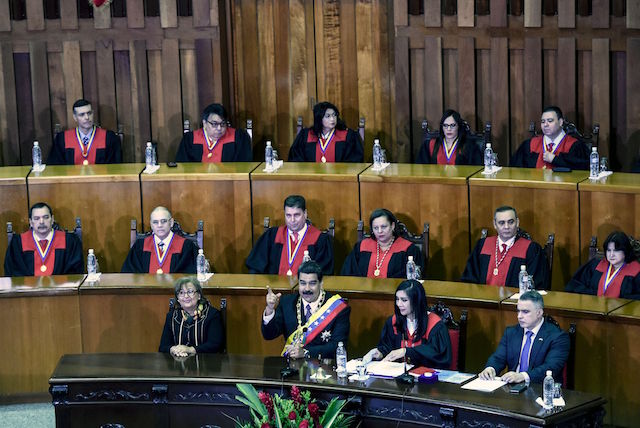 Venezuelan President Nicolás Maduro (C) delivers a speech reviewing his year in office at the Supreme Court of Justice in Caracas on Jan. 15, 2017. Maduro angered his opponents by refusing to deliver his annual presidential address in the legislative chamber, fanning tensions in the volatile country. Juan Barreto/AFP/Getty Images

The government has fewer financial resources to work with this year than last, and its creative, alternative options for dealing with dwindling accounts are running out. This time last year saw much speculation over a potential default on $9.6 billion of debt due in 2016. Through the sale of gold and other financial maneuvers, the government managed to meet its debt obligations for the year. However, in 2017, the government must do it again with $8.1 billion of debt (and that’s after some bond swaps). This time around, the government has even fewer resources. Its gold stock has not been replenished after last year’s sales. In the last seven weeks alone, central bank reserves fell by $1 billion to $10.95 billion. According to the Venezuelan government, it brought in $5.29 billion worth of foreign currency in 2016, down from $13.32 billion the previous year. Without an astronomical spike in oil prices, depletion of the reserves at best can be expected to only slow down.

Venezuela’s finances are in a precarious situation, and as a result the country is struggling to afford imports. Food and medical supplies are largely imported into Venezuela, and the shortages of such goods have been well documented. However, there are still reports of cargo ships arriving at ports – including Puerto Cabello and Puerto El Guamache – with several tons of food and basic hygiene supplies. This means food supplies may decline even further, especially if the government cannot prop up imports. In 2016, the Venezuelan government and private sector spent $17.8 billion on imports ($6.8 billion and $11 billion, respectively). This was roughly half the value of total imports in 2015 ($36.9 billion) and well below a peak in 2012 of $65.95 billion. With no major influx of revenue expected this year, the government will be unable to improve the food supply problem and will struggle to maintain the current level of shipments, which have proven insufficient.

Equally, if not more alarming, is the country’s escalating political crisis over the last 12 months. At this point last year, the opposition coalition Democratic Unity Roundtable (MUD) had just taken over the National Assembly with multiple institutional avenues it could have pursued to bring about a resolution to the political crisis, namely a change in government. However, this is no longer the case as many of the opposition’s options – such as charging the president with failure to honor the constitution, holding a referendum and passing constitutional changes – have been met with gridlock and are largely exhausted.

Political gridlock in 2016 had the effect of deteriorating what little institutional integrity remained in Venezuela. When the National Assembly tried to go after Maduro and remove him from power through legal means, either the Supreme Court did not recognize the assembly’s authority over the matter or the National Electoral Council found legal loopholes to sabotage timelines. As a result, the deadline for a referendum that would have resulted in elections and could have paved the way for a new government has passed. By law, any referendum to remove Maduro from power held from this point forward in 2017 would result in government loyalist and Vice President Tareck El Aissami taking office. However, the opposition is still pursuing new elections, which would require extraordinary administrative measures or a mass popular uprising.

Furthermore, MUD spent 2016 mobilizing support and increasing pressure on the government. This year, it will continue to use this tactic (as evidenced by the Jan. 23 mobilization), but its starting point will be much stronger than it was a year ago. The protests are expected to start near the size observed at the end of 2016 – tens of thousands – rather a couple hundred, which was common in early 2016. Another key component continuing from last year is mediation led by the Vatican and supported by the Union of South American Nations. Both the government and opposition have at some point criticized negotiations and are reluctant to concede anything due to lack of faith that the other side will honor its word. Neither side wants to be seen as the first to walk away and therefore be responsible for negotiations failing. So, while both sides will send representatives to the table, little can be expected in terms of a solution.

Three additional current factors point toward an escalation of political tensions this year and suggest a breaking point will be reached. First, the MUD coalition is renewing unity efforts. The group has struggled in the past to present a united front, and this in many ways weakened its political efforts. While we don’t expect the group to become totally cohesive overnight, any progress toward unity will strengthen the coalition. Second, Central University of Venezuela’s student group, one of the country’s strongest, most organized protest groups, has already voiced its discontent with the National Assembly’s 2016 strategy. It has called on the legislature to adopt a more radical strategy this year, including concrete governance change. Lastly, there are signs that the Maduro government is increasing intelligence and security operations to detain opposition political figures and suppress opponents. El Aissami explained that some of these detentions were due to opposition members of Congress allegedly planning destabilizing actions near the Colombian border. The comptroller general requested a private meeting with opposition leader Henrique Capriles without divulging the reason or agenda. The Supreme Court also is collecting detailed information on every political party and their members in the National Assembly.

Given the financial constraints facing the government and institutional constraints facing the opposition, we do not believe the current status quo in Venezuela can be sustained for the entire year. Even with the most creative efforts, money cannot appear at will. While the population has proven resilient to living in adverse conditions for years, it has become by no means complacent and will be more motivated to seek change as conditions worsens. This could play out in several ways, but all lead to the same place. Maduro’s government will reach its breaking point this year.

In Search of the Normal

US-Mexico Border Security: A Modern Version of an Old Problem