A war has broken out between the president and the press. A better way to put it is that an ongoing war has escalated to new heights. President Donald Trump has declared the press the enemy of the people. The press is declaring Trump a threat to all American liberties and a vile monster. I use the term press rather than media, incidentally, because that is the language of the Constitution and in some ways this is a constitutional battle.

The president has refused to allow certain TV and publishing outlets to attend press briefings. He has demanded investigations for how the press has obtained classified information. He has refused to attend the White House Correspondents’ Dinner, which in Washington is holy terrain. At the dinner, politicians and reporters pretend that they actually like each other. 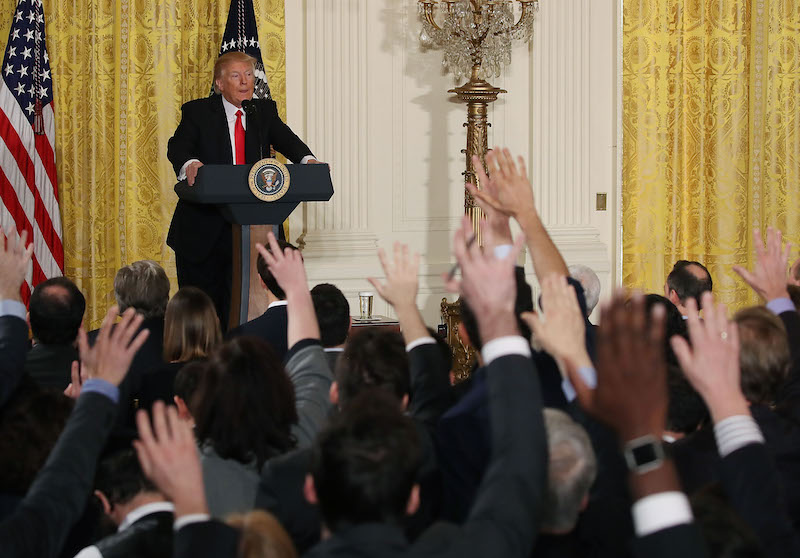 Journalists are taking every opportunity to find ways to criticize Trump. The Washington Post recently reported that a passenger asked a Pakistani couple on a United Airlines flight if they had a bomb in their bag and continued to harass them. Normally, a man acting like a jackass on a United flight would not be news. The Washington Post made it news, with the obvious intent to demonstrate how the president’s positions had triggered such rage. The president views the press as his enemy. The press views itself as the unbiased defender of the republic.

Rage between a president and the press is not new. The rights of the press were built into the Constitution. The founders gave them these rights along with an obligation – to hold government officials accountable for their actions. Not trusting government, the founders commissioned a nongovernmental entity to turn challenging the state into a business. The press’ job was to monitor the state. Since this was a republic in which ordinary citizens were supposed to control the state, the role of the press was to be the guardian of the republic.

The problem is the one posed by the Roman poet Juvenal: Who will guard the guardians? Journalists are human, and they have their likes and dislikes. Moreover, people who become journalists arrive with common views of things, which is why they became journalists. In the course of their careers, their views are further shaped by the business they are in and by the need to get raises and promotions. All institutions have a sort of template to determine who is praiseworthy, and the press is no different. Therefore, journalists have a tendency, out of choice, experience and pressure, to have similar views.

The founders knew that government officials needed to be monitored by the press. They assumed that the press would be monitored by internal accountability. It has not always worked, particularly for what used to be called the prestige press. A generation ago, this included The New York Times, The Washington Post, the three broadcast networks and the two major newsweeklies. They had an overwhelming power to shape public opinion and thereby the republic. They could help bring down presidents, as The Washington Post did with Richard Nixon. They also could elevate presidents far beyond their achievements, as was the case with John F. Kennedy.

Although Trump claims that he could have won the popular vote if millions of illegal ballots were not cast, the fact is that he lost the popular vote by a significant margin. Various polls put his popularity rating between 37 percent and 51 percent. Given the high approval ratings of past presidents after inauguration, which tend to be around 60 percent, even a 51 percent rating is bad, and a 37 percent rating is disastrous. An approval rating in the 30s shows that only his core supporters back him. Even his highest rating says that he has failed to convert any of his enemies. Presidents tend to disappoint their most ardent followers within a year. This is because presidential candidates make promises they can’t keep, a fact as true of Barack Obama as it is of Trump. Congress won’t go along with his plans, the Supreme Court will block them, the bureaucracy will delay them or the promises prove to be simply undoable. Therefore, after the euphoria, there is disappointment.

Trump must hold on to his base at all costs if he hopes to govern. The strategy he used to win the presidency was built on the assertion that Trump was engaged in a struggle against those who are indifferent to his supporters’ needs. At the center of this group was the press. Demonizing the press was not difficult. The low regard in which the press is held is extraordinary. According to a Pew Research Center poll, only 18 percent of respondents said they trust news organizations “a lot.” According to a Gallup poll, 32 percent of the public find the press reliable. One number is catastrophic and the other is merely disastrous. The press admires itself far more than the public it serves does.

Therefore, attacking the press in order to hold Trump’s base together is good politics. In this strategy, Trump is aided by the press’ daily and unremitting attacks on him. When you look up articles about Trump in The New York Times and The Washington Post, they appear as an unending barrage of attacks, some reasonable and some preposterous. But they all serve Trump’s interests. The prestige press’ unmodulated hostility helps Trump make the claim that he is under attack by elites hostile to his supporters. It allows him to make the reasonable claim that the press wants to destroy his presidency. Having as your opponent an institution distrusted by the public is very good politics.

The press does this because they see Trump as a threat to the republic and because it is good business. The readers, listeners and viewers of the prestige press tend to be a minority of the market. Many draw news from other sources seen by the prestige press as beneath them. The press must hold on to readership, because if that readership falls even moderately, news organizations’ ability to stay in business would be in doubt. The readership consists overwhelmingly of people who despise the president. Every time the president attacks the press, their readers become more loyal to these publications. When Trump attacks these publications by name, their readers, like Trump’s followers, enter that interesting place where rage at your enemy turns into pure pleasure.

As you may recall, after 2008, the publishing industry and news organizations were badly hurt by the economic crisis. The situation has stabilized, but the financial instability of the press is far from over. Since the values of journalists and editors at these publications and those of their readers are congruent, reporters are happy to write constant negative articles on Trump that dominate their publications. In doing this, they mobilize their own base, not so much to vote – they will vote against Trump anyway – but to remain faithful to a publication now focused on reinforcing readers’ hatred of Trump.

From a political and business point of view, this is not a time for nuance. Each side must demonize the other, and each side feels aggrieved at having been demonized. Trump must hold his support, and the press is working hard every day to make sure that this happens. The press must hold on to its readership, and Trump is doing his part to help make sure the press survives, and even flourishes. The humor of the situation is that both are trying to hold on to their base and keep it from evaporating. Each is doing that by demonizing the other.

The Constitution saw a free, privately owned press as a bulwark against tyranny. The founders were not in awe of journalists since they knew that journalists, as part of a business, would do and say things that appeal to readers. The 18th century was not a time for truth-telling by the press. But people still valued journalism as useful. The president was the alternative to a king, but Washington expected politicians to savage each other, and the press to savage all. The hope was that from this would emerge a civil society free to run businesses and farm the land unimpeded by the state or journalists. The founders devised a system of mutually assured destruction. Therefore, while you go off to work to make money, you can express your loathing of your favorite target, Trump or the press, and enjoy their rage at the other. Thomas Jefferson and John Adams would be pleased.

This is all pretty awful and utterly disgusting, and also, when you think of it, more than a little funny. I guarantee that the founders are cracking up, more at the self-righteousness of all sides than anything else.

The Importance of Key West