Albert Einstein’s definition of insanity was doing the same thing repeatedly and expecting a different result. In January 2002, U.S. President George W. Bush famously declared Iraq, Iran and North Korea the axis of evil in his State of the Union speech. This week, with the passage of a bill to impose expanded sanctions on Russia, Iran and North Korea, the U.S. has effectively replaced the axis of evil with the axis of the sanctioned – the only difference being that Russia has replaced Iraq on the list of sinners. But if Washington is expecting to see different results this time around, it’ll soon learn how misguided this expectation is.

The U.S. House of Representatives approved the sanctions bill on July 25 with an overwhelming majority (419-3). It was passed by the Senate on July 27 by an equally decisive margin (98-2). Because of the strong majority with which it passed both the House and the Senate, it’s unlikely President Donald Trump can veto the bill.

All three countries targeted by the legislation have been the subject of sanctions before. Many have debated whether this tool is an effective way to influence a country’s actions. A study updated in 2009 and published by the Peterson Institute for International Economics examined 174 case studies and determined that sanctions were partially successful 34 percent of the time. According to the study, the success rate varied based on the goal. If the goal was modest and specific, such as the release of a political prisoner, the success rate approached 50 percent. But if the goal was regime change or significant policy reforms, the success rate was only 30 percent.

The bottom line is that sanctions are an ineffective way of achieving foreign policy objectives in two-thirds of cases, according to this study. They can be a powerful tool, alongside other measures, to encourage a country to halt a certain action, but on their own they can achieve little and might actually make a situation worse.

It is with that in mind that the geopolitical implications of the sanctions bill should be evaluated. Of the three countries included in the bill, Russia has drawn the most attention because of the Russian cloud that has cast a shadow over Trump’s administration since he came to office. But the bill was originally designed to levy new sanctions against Iran; North Korea was also subsequently added. These three countries arguably represent the United States’ most significant geopolitical challenges today. They also happen to be intractable issues that the U.S. does not currently have the will or power to change in any meaningful way – and sanctions won’t alter that reality.

Consider North Korea. The U.S. has been hoping that partnering with China and expanding international sanctions against North Korea, which has already been subject to sanctions for decades, could convince the regime to stop its pursuit of nuclear weapons. The existing sanctions were ineffective, in part because the regime is willing to endure some discomfort to ensure its survival, and giving up its weapons program could put that in jeopardy. China, meanwhile, is either unwilling or unable to bring Kim Jong Un to heel. In the first half of this year, it even increased its exports to Pyongyang by 20 percent year on year, according to a report by the Korean International Trade Association on July 26. (The same report also indicated that Chinese imports from North Korea have decrease by 24.3 percent in the same period.)

The Chinese government itself has also reported increased exports to North Korea in the first and second quarters of 2017. Trump even accused China on Twitter last month of not living up to its sanction pledges against North Korea.

The U.S. is beginning to get the impression that Beijing isn’t willing to apply financial pressure on Pyongyang, and some say the next step should be to impose sanctions against China. But sanctions won’t force China to handle the problem the way the U.S. wants. The dirty little secret is that China’s prestige as the chief negotiator with Pyongyang far outweighs its actual power. That becomes abundantly apparent in situations such as these.

Or consider Iran, which has been a foreign policy disaster for the United States since the 1953 military coup that the U.S. helped organize. Many believe the “unprecedented” sanctions (as they were described by U.S. officials at the time) imposed in 2010 have been effective. After all, just five years after they were implemented, Iran signed the much-maligned nuclear deal. Proximity, however, is not causality. Iran did not capitulate because of sanctions. 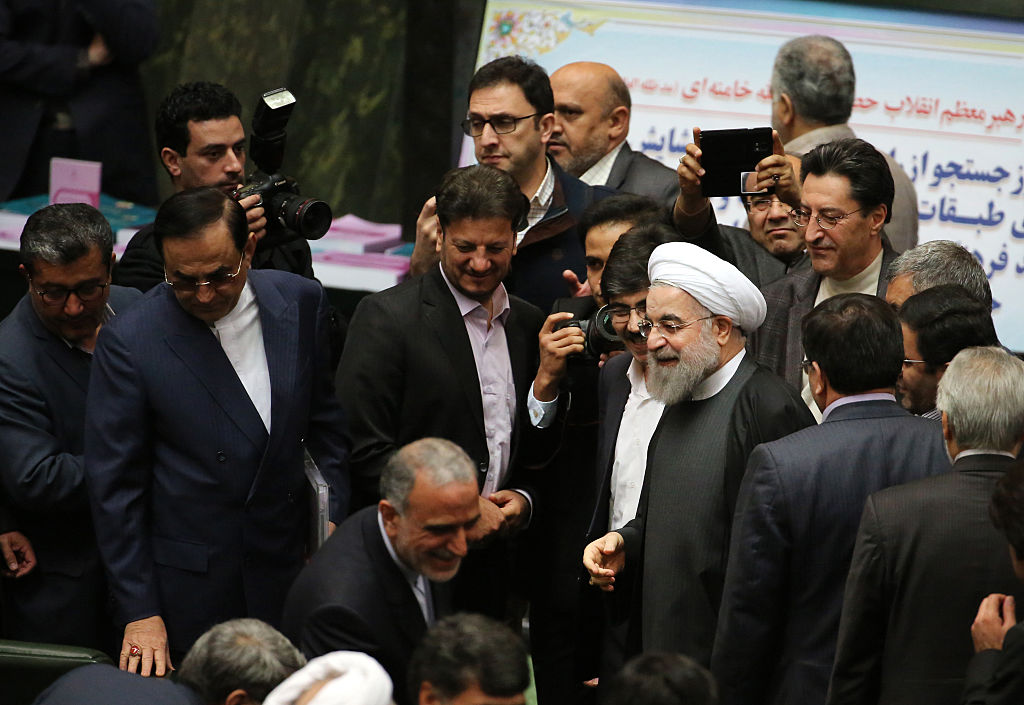 Iranian President Hassan Rouhani (C) arrives at parliament ahead of presenting the proposed annual budget in the capital, Tehran, on Jan. 17, 2016, after sanctions were lifted under Tehran’s nuclear deal with world powers. ATTA KENARE/AFP/Getty Images

This is not to say sanctions were irrelevant. They were no doubt painful for the Iranian economy, and they became a major political issue in Tehran. But what compelled Iran to sign the deal was that Iran’s strategic plans were disrupted after the Syrian war broke out. In 2010, a Shiite arc of influence, led by Iranian-backed proxies, seemed poised to spread from Tehran all the way to the Mediterranean. But then Bashar Assad’s government came under attack in Syria, and it continues to fight a bloody civil war that has permanently fractured the country. More important, out of the ashes of the U.S. intervention in Iraq, a force arose that would eventually become the Islamic State.

It’s this reality – not the economic impact of sanctions, significant as it may have been – that convinced Iran to enter into the nuclear deal. Iran was wary of a potential Sunni Arab power rising on its border, one with an ideology that saw Iran as an enemy equal to if not greater than the West. The rise of IS meant that suddenly the United States and Iran had a common enemy; IS threatened the national security interests of both countries.

Now that the Islamic State is on the defensive, the subtle ties between these strange bedfellows are beginning to show signs of fraying – on both sides. The issue is that Iran wants to be the dominant power in the Middle East, while the United States doesn’t want any single country to control the region. Defeating Iran by military force is not a realistic option for the Middle East, and by toppling Saddam Hussein’s regime in 2003, the U.S. eliminated the natural balance to Iranian power in the region. The U.S. is trying to reconstruct a regional balance of power to deal with Iran, but the Saudis are weak, the Turks have little desire or need to enter the fray at this point, and no one else is up to the task. Sanctions are not going to induce Iran to stop testing ballistic missiles or to stop funding its proxy groups throughout the region; in fact, they may have the opposite effect.

And then there’s Russia, which has become something of a U.S. media obsession. Like George W. Bush and Barack Obama before him, Trump came to office hoping to build a better relationship with Russia, only to realize it’s much easier said than done. Trump may have thought that a positive personal relationship with Russian President Vladimir Putin was going to be enough to accomplish what his predecessors couldn’t. But niceties don’t change the fact that Ukraine is a national security interest to Russia, and that the United States – even under Trump – has shown no signs of bending on the Ukraine issue. In fact, Trump has met with Ukraine’s president and has declared his support for Ukraine multiple times. The State Department’s new special representative to Ukraine even said July 25 that the U.S. might consider providing Kiev with defensive arms.

The sanctions bill won’t convince Russia that it can abandon Kiev to the West’s orbit, and it may even embolden Ukraine. It may be coincidence, but Ukraine’s recent decision to cut off electricity to Donetsk, amid other markers of tension, suggests that these sanctions could encourage Kiev to push back against Russia with an expectation of U.S. support. Russia will have to retaliate in some way. In light of this possible escalation, we at GPF may even have to re-examine our forecast for 2017, which saw Ukraine as a frozen conflict.

This is not to say that sanctions are ineffective or that they don’t have any geopolitical import. They do, and we’ll be publishing more on their impact in the near term. But by relying on sanctions that have had only a marginal effect in the past, the U.S. is insisting on forcing square pegs into round holes. That will have ramifications, but the underlying problems – North Korea’s pursuit of nuclear weapons, Iran’s pursuit of regional hegemony and Russia’s need to maintain Ukraine as a buffer – will remain long after these sanctions are lifted.

China in Africa: A Different Kind of Military Theater