The U.S. House of Representatives has passed a bill to renew and expand sanctions against Russia that were imposed after Russia’s annexation of Crimea. The bill, however, could also have a negative impact on some European energy projects that are linked to Russian companies. Since the initial bill was first approved by the Senate on June 15, the European Union has been lobbying U.S. lawmakers to revise the proposed legislation and reduce its effects on third countries. But lobbying is essentially all the EU can do at this point; it can’t retaliate against the U.S. because such a move would require approval from all member states, which is unlikely.

The final text of the new bill hasn’t yet been made available, but the initial version that was voted on in June would have imposed sanctions against any foreign person or entity that has significant investments in certain Russian energy projects. This means that even non-U.S. companies involved with Russian businesses could be targeted. It is this part of the bill that has drawn criticism from the EU, particularly Germany, because European companies are involved in several energy projects with Russian businesses. On June 16, a spokesman for German Chancellor Angela Merkel said Germany generally does not support sanctions that have effects on third countries. 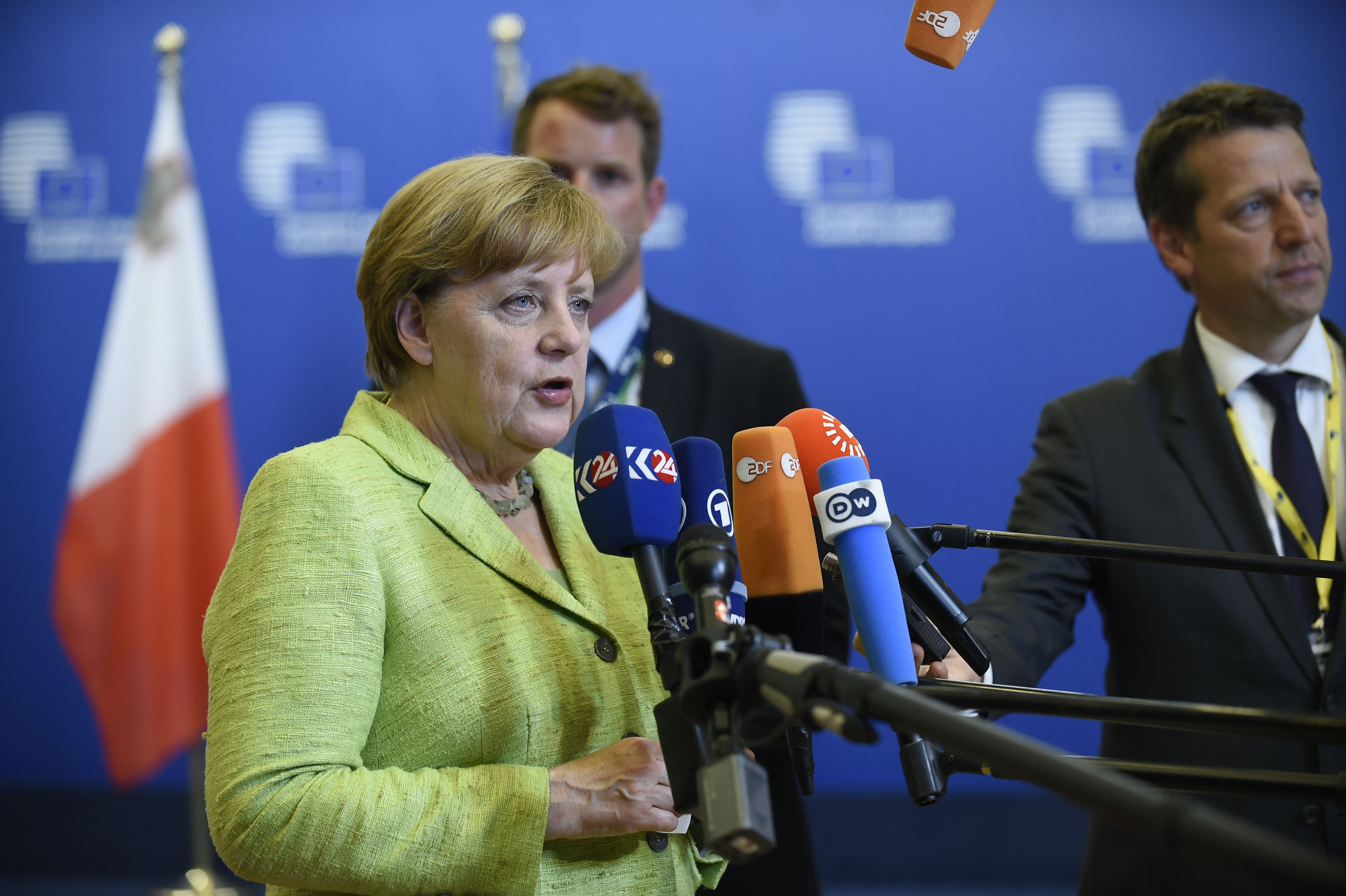 German Chancellor Angela Merkel speaks to the media as she leaves a European Council meeting at the European Union headquarters in Brussels on June 22, 2017. JOHN THYS/AFP/Getty Images

EU efforts to convince U.S. lawmakers to revise the bill have had limited results. According to media reports, they did manage to increase the percentage of Russian participation required in an energy project to qualify for sanctions from 10 to 30 percent. But this still means that the sanctions could affect some functioning infrastructure projects like the Baltic LNG project (run by Shell and Gazprom), the Blue Stream pipeline (run by Italy’s Eni and Gazprom), CPC pipeline (run by Shell, Eni and Rosneft) and Nord Stream 1 (run by various European firms and Gazprom). If these European companies decide to increase their level of investment in these projects, they can be penalized under the U.S. sanctions bill.

The bill could also penalize companies involved in Nord Stream 2, a joint project between German and Austrian companies and Russia’s Gazprom. Nord Stream 2 will enable Russian gas to be delivered to Germany without using the existing pipeline that runs through Ukraine. This project has been the subject of U.S. criticism before. It would make it easier for Russia to cut off gas supplies to Ukraine – without any subsequent effect on other European consumers – and allow Moscow to use energy as a tool to influence Kiev. The European Commission has backed that argument and has repeatedly said Nord Stream 2 is inconsistent with European energy security goals. But Germany has a different perspective; it sees the project as another way to secure its energy needs, and it wants to protect the interests of German companies. So while the EU and Germany both oppose the U.S. sanctions bill, they do so for different reasons. Germany has a direct interest in some of the projects that could be affected by the bill, while the EU just doesn’t want the U.S. meddling in European affairs.

The European Commission has said it will hold a meeting on July 26, after the House vote, to discuss retaliatory measures. Representatives from the commission said the EU will respond to the bill in kind. But imposing any measures that could penalize U.S. businesses operating in the EU would be difficult – all initiatives proposed by the commission need to be approved by the EU Council, which would require agreement from all member states, and this is unlikely. Member states don’t share the same interests when it comes to energy, and some will be reluctant to retaliate against a bill that hinders Nord Stream 2 because they don’t support the project in the first place. In Poland, for example, the anti-monopoly agency blocked the formation of a consortium between Gazprom and its European partners that would have run Nord Stream 2, forcing the companies to seek other legal routes to proceed. The Baltic states also have publicly resisted the project – they don’t want to see Europe’s dependence on Russian gas increase. Eastern European states, which view Russia as their main security threat, have not objected to the U.S. sanctions bill. The main opposition in Europe to the sanctions bill, therefore, comes from Western Europe, which doesn’t see Russia as a major threat and which has significant business ties with Russian companies.

But given that Western European countries wield substantial power in the EU, the European Commission still wants to find some way to respond to the bill. One option is to file a complaint with the World Trade Organization, claiming that the sanctions unfairly disadvantage European companies, and to impose higher tariffs for U.S. exports to the EU. But the commission would first need to determine that imposing higher tariffs on U.S. exports would be beneficial for the EU – it’s not clear yet that this is the case. The commission would then need to gather a lot of information to compile a case against the U.S., and this would take quite some time. The commission could also encourage European companies to fight the sanctions in international courts. But the companies would have to decide themselves whether they want to take this step, and even if they do, a resolution could take years.

The EU ultimately can do little to retaliate at this point. The bloc’s decision-making process and the level of bureaucracy involved prevent it from amassing a coherent response. And the ability of individual member states to respond independent of Brussels is restricted – as members of the common market, they can’t take action on a bilateral level against a third party. Thus, agreement on how to proceed is required from across the bloc. But considering that European states can’t agree on much these days, let alone their views on Moscow, it’s unlikely that they will come to an agreement on how to respond to the sanctions bill.

Germany: Keeping an Eye on the Balkans