The Islamic State has claimed responsibility for an attack outside of a concert hall in Manchester that killed 22 people and left 59 wounded. British police are now trying to determine if the individual who detonated the improvised explosive device had help or acted alone. The complexity that comes with building an IED of this type along with the arrest of a 23-year-old man in connection with the attack suggest the former, but we can’t do much more at this point than speculate. One thing we can say for certain is that this attack reveals the Islamic State’s dual nature – it’s a political entity, but it is also an ideological movement. And as an ideological movement, it’s using terrorist attacks to draw the world further into the conflicts in the Middle East. 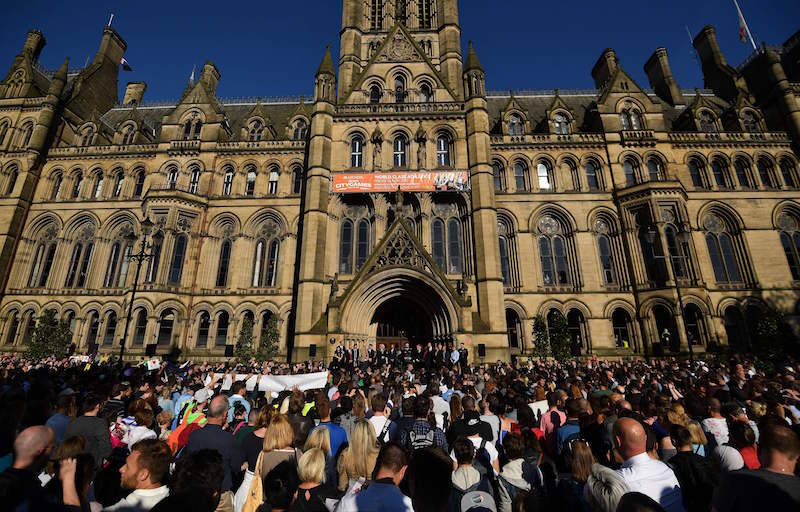 People attend a vigil in Albert Square in Manchester, northwest England, on May 23, 2017, in solidarity with those killed or injured in the May 22 terrorist attack at the Ariana Grande concert at the Manchester Arena. BEN STANSALL/AFP/Getty Images

The Islamic State has two key components. The first is evident just by looking at its formal name. It is an Islamic state, a political and military entity that controls territory in Syria and Iraq. This state provides services, supervises education, collects taxes, and maintains its own religious, totalitarian sense of law and order. Its military forces are some of the most capable in the region and have shown time and again the ability to retreat and regroup when confronted by superior militaries, without losing morale.

The second component is more amorphous. The Islamic State is an ideological movement that preaches devotion to a radical, fundamentalist reading of Islamic texts. This ideology advocates worldwide jihad against the infidels wherever they reside, but its prime target is the Western world: Ariana Grande and the teenage girls who attended her concert in Manchester are seen as proxies for Crusader soldiers. This ideology is equally hostile to Russia, China and any other countries with Muslim populations that IS hopes to radicalize. In its ideological function, the Islamic State is decentralized and provides only enough resources to encourage and teach individuals or cells of individuals to carry out attacks like the one in Manchester.

Geopolitically, the first of these two entities is of far more potential consequence than the second. A radicalized, Sunni Arab force hell-bent on regional domination could threaten the balance of power in the Middle East, especially if it could unify the Sunni Arab world under a single banner. It may sound fantastical to imagine that IS could morph into such a force, but then it would have been fantastical to imagine that an illiterate merchant born in the Arabian Peninsula could give birth to a religion and an empire that have dominated the Middle East for centuries. The U.S. wants to preserve a balance between Middle Eastern powers so that the U.S. does not have to intervene in the region’s conflicts, and the Islamic State is a threat to that balance.

In the West, however, the Islamic State’s ideological component has a greater personal impact on individuals because it’s being used to inspire terrorist attacks that hit close to home. The Islamic State is doing this out of necessity because it is a weak actor that all four of the Middle East’s regional powers – Turkey, Israel, Iran and Saudi Arabia – have an interest in preventing from becoming more powerful. The U.S., Russia and a host of other major countries share this interest and, despite the political rhetoric on all sides, are cooperating to a degree to keep IS weak and contained. Terrorism has always been used by those who lack the power to realize their political goals in conventional ways, and the Islamic State is no exception.

The problem is that the ideological component also makes IS much harder to destroy. Even if its enemies manage to dismantle its self-declared caliphate, supporters of the IS ideology are hard to identify and are not confined to a specific location. A war against such an entity becomes a game of whack-a-mole in which some members and supporters may be taken out, but the group itself cannot be fully eradicated.

Terrorist attacks committed by the Islamic State are not as geopolitically significant as its operations in the Middle East. But battles in Middle Eastern deserts and the political health of governments in Jordan and Saudi Arabia are not part of the daily lives of Americans or Brits or Russians. They instead experience the effects of refugee flows and terrorist attacks. But these exports of the Islamic State in turn create intense political reactions in the countries they affect. These reactions cause the Islamic State’s enemies to want to close their borders, distrust their own Muslim populations and take the fight to IS on its home turf.

This is what IS wants. It wants the world to see global events through its eyes, as a battle of civilizations between Islam and its enemies. It wants to draw the world further into a conflict in which IS believes it has one key advantage: stamina. IS benefits from the inevitable negative effects of war; it helps IS attract new recruits and frees up territory in which IS can find sanctuary. This creates a catch-22 for enemies of the Islamic State. Countries like the U.S. and U.K. can’t ignore the threat IS poses as a radicalized Sunni Arab entity in the heart of the Middle East, but they also must face the reality that intervening in the region strengthens the ideological component of the Islamic State.

This also creates a dilemma for Western countries domestically. The type of surveillance and enforcement that would be needed to prevent terrorist attacks would play into the Islamic State’s hands. In the West, some have criticized these measures, arguing that they encroach on civil liberties, which IS can take advantage of. And in countries like Russia, cracking down on terrorist activity in regions such as Chechnya risks radicalizing domestic Muslim populations. IS, for its part, provides just enough in the way of training materials and assistance to help would-be adherents to its movement to move from using small arms or knives to devices like the IED used in Manchester. The vast majority of Muslims are innocent, but it is impossible to separate the innocent from the guilty just by looking at them, and so the cycle continues.

This may sound bleak, and in some ways it is. Terrorism is a tactic that has been used by many groups for many centuries, and its endurance as a tactic is a testament to its effectiveness. Attacks like the one in Manchester are particularly grotesque because they target the truly defenseless. Children and young teenagers were the main audience at the concert when the attack was carried out, which means children were not just collateral damage but the primary target. But despite how dangerous the Islamic State’s brand of terrorism is, it lacks the power to achieve its ultimate aims. Terrorist attacks like the one in Manchester encourage fear, hysteria and desperation, and it is impossible not to feel these visceral responses in the wake of an attack. It is possible, however, not to be ruled by these passions, and to make decisions based on what will best degrade the enemy.

Ronald Reagan said the following in a radio address in 1986: “History is likely to record that 1986 was the year when the world, at long last, came to grips with the plague of terrorism.” The previous year, religious or secular terrorist organizations had carried out multiple attacks on civilian targets: TWA Flight 847, an Italian cruise ship, and airports in Vienna and Rome. In 1986, Moammar Gadhafi’s regime in Libya sponsored an attack at a club in West Berlin, which the U.S. answered with airstrikes. Reagan was wrong that the world had at last come to grips with the plague of terrorism. It is impossible to come to grips with a tactic. It is only possible to defeat one’s enemies and to protect one’s own. The Manchester attack simultaneously demonstrates how hard it will be to eradicate IS completely and how weak the Islamic State is in reality. There is little solace in that truth, but it is true nonetheless.