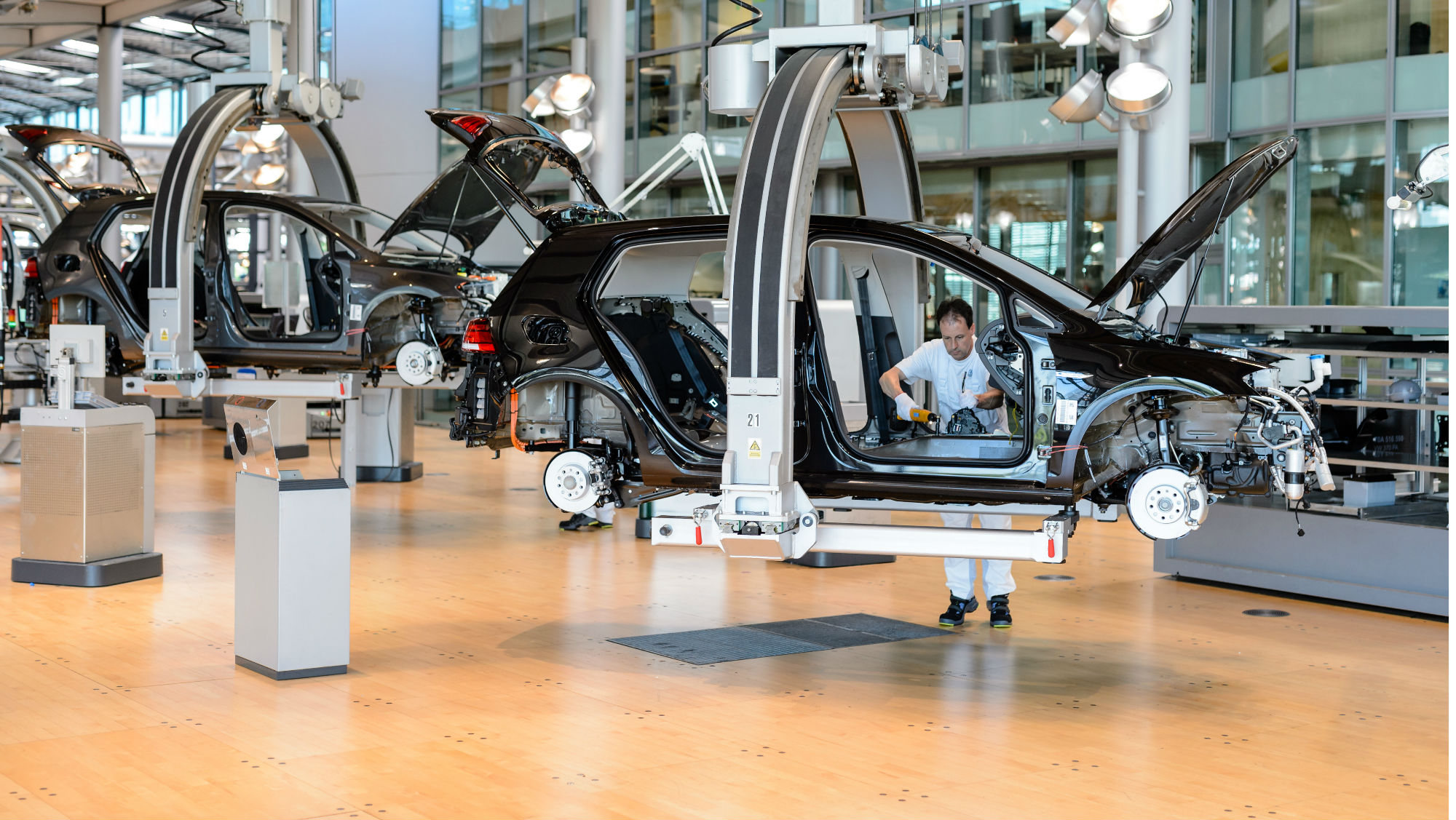 Germany’s economy is in trouble. According to the Ifo Institute, a top German think tank based in Munich, “storm clouds are gathering over the German economy.” And like a storm, the problems have appeared suddenly. It was only a year ago that Handelsblatt, a German business newspaper based in Dusseldorf, said that 2017 was to be a record year for the German economy and that prospects looked good for the future. It was only six months ago that the International Monetary Fund marked up its forecasts for German economic growth in 2018, and just five months ago that the German government revised its own growth forecasts up to 2.4 percent from 1.9 percent. And it was only four months ago that the EU patted itself on the back for its largest growth rates in a decade, credited largely to Germany’s economic revival.

That all seems like a long time ago now. Die Welt, an influential conservative daily, proclaimed on June 19 that “the second German economic miracle is over.” The Ifo Institute recently cut its growth forecast to 1.8 percent from 2.6 percent; another Berlin-based think tank called DIW slashed its forecast to 1.9 percent this year and 1.7 percent next year. Official German economic data showed that growth in Q1 of this year was half the rate of the previous quarter. Q2 followed with decreases in industrial production and industrial orders – bad omens for the near future. On June 20, Daimler AG, one of Germany’s most visible and important companies, “adapted” its earnings expectations. At least the German penchant for euphemism remains undiminished. 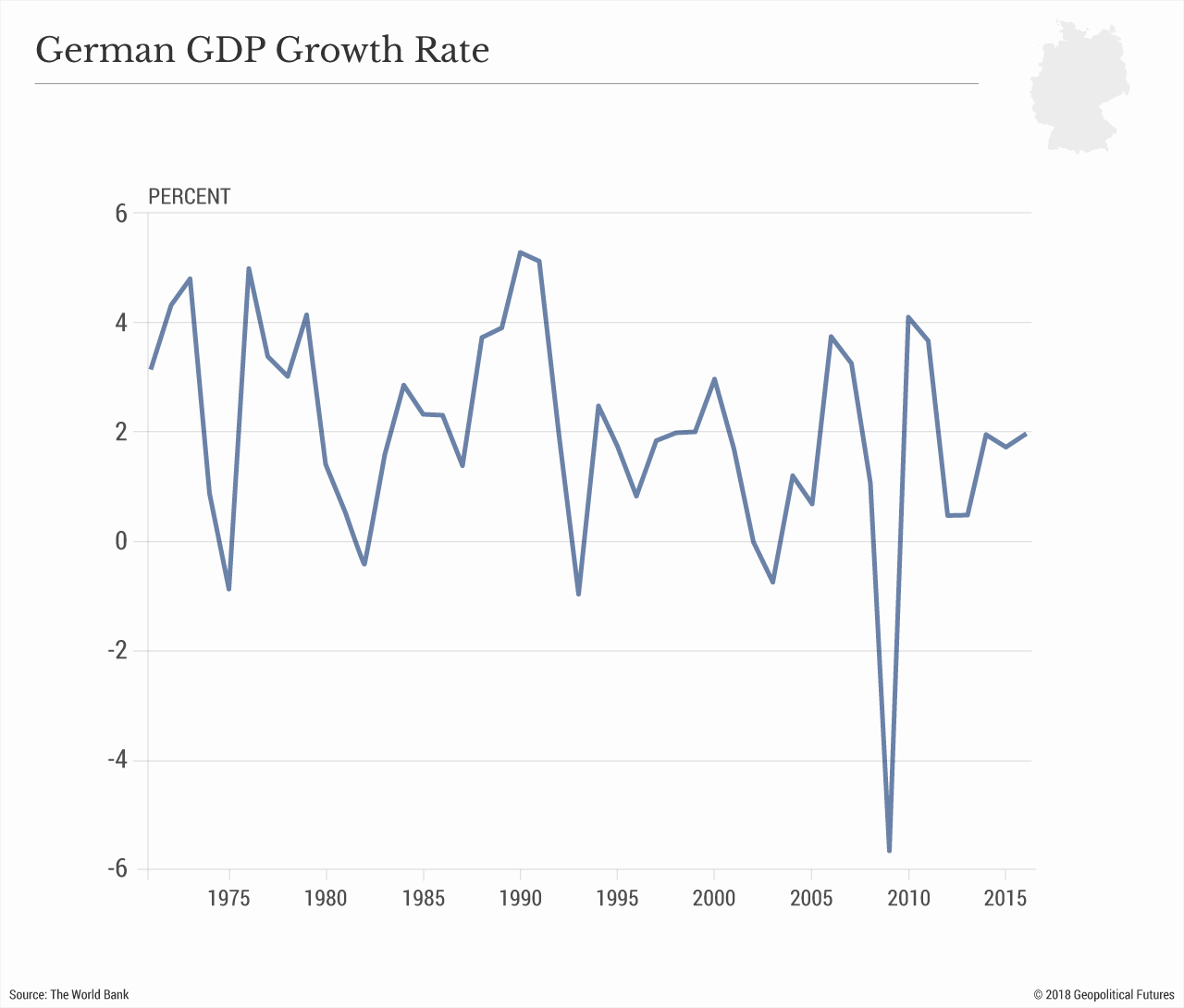 The media narrative that has fast taken hold puts the blame on U.S. protectionist policies. To be sure, U.S. President Donald Trump’s menacing tweets about slapping 20 percent tariffs on imports of German cars have not helped matters for Germany. But that is not the primary cause of Berlin’s troubles. It is also tempting to ascribe the instability in the German economy to the political strife in Berlin, where Chancellor Angela Merkel’s every statement is being nervously parsed for signs of weakness. The ties that bind Merkel’s Christian Democrats and their Bavarian sister party, the Christian Social Union – a political alliance that has lasted 69 years – are fraying. But the truth is that Die Welt has it right. Germany’s economic problems are structural, an inevitable outgrowth of the same aspects that catapulted Germany from stagnation to the European economy’s only hope after the 2008 financial crisis.

Germany’s first economic “miracle,” the so-called Miracle on the Rhine, came after World War II. West Germany’s rapid recovery from that war was stunning but, in the literal sense, not quite miraculous – unlike a miracle, West Germany’s regeneration was very explicable. 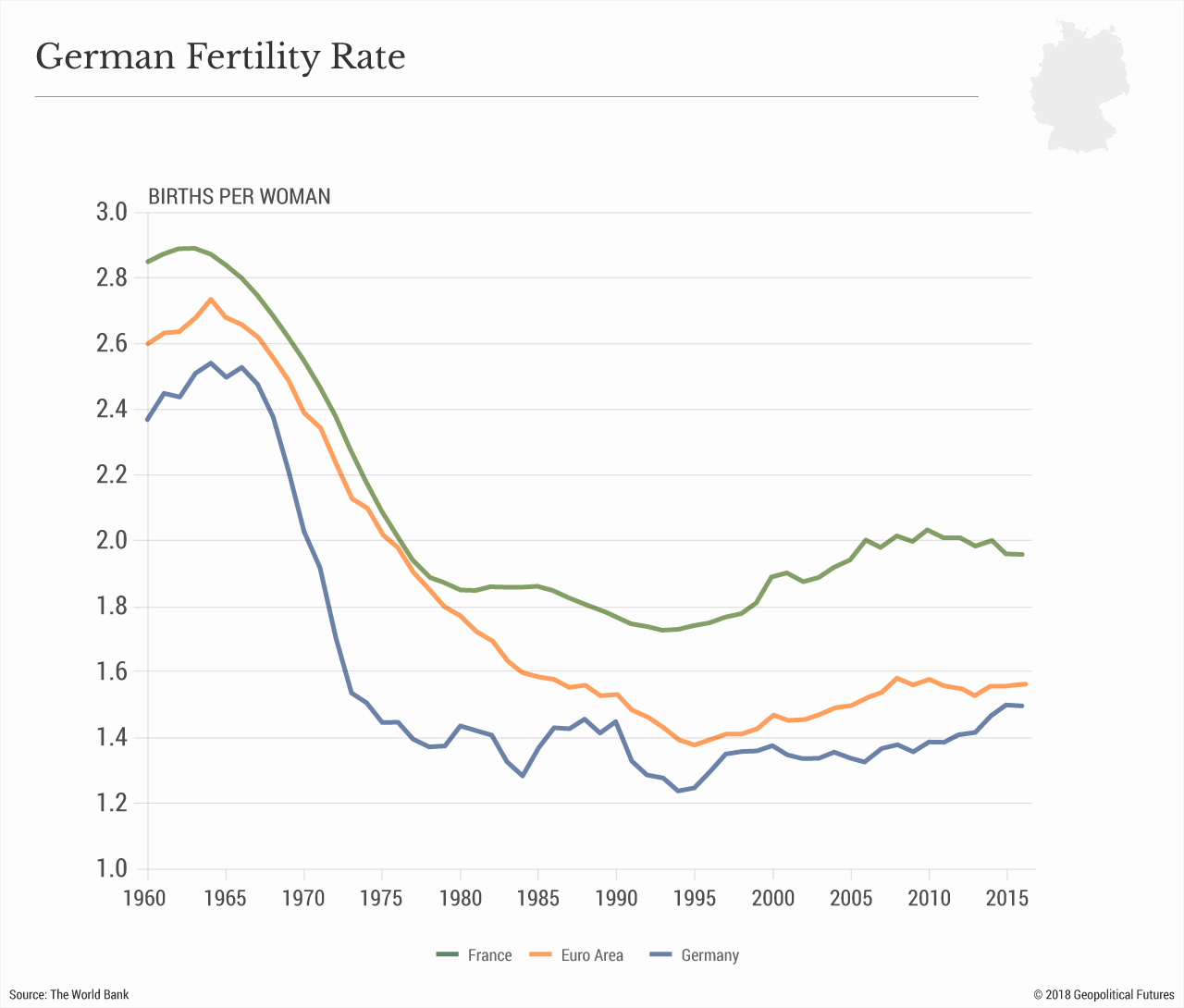 First, there was a population explosion. West Germany, which on the eve of World War II looked like a demographic nightmare, saw its population grow by 28 percent from 1950 to 1970, with an average total fertility rate almost double the current 1.5 percent. Second, the Nazis left Germany with a haunting moral inheritance but bequeathed to West Germany a tremendous economic head start. The Allies succeeded at damaging only about 20 percent of the German industrial plant by May 1945, and the Nazi government’s massive investments in new industrial equipment and its focus on industries such as engineering and vehicles made German production of these goods world class. In other words, Germany wasn’t known as a manufacturing powerhouse before the 1950s. And then there was the immense support of the United States, which needed to rebuild West Germany to hold the line against the Iron Curtain. Through the Marshall Plan alone, the U.S. contributed $1.45 billion (about $13.77 billion today) to West Germany’s reconstruction.

For almost four decades, the West German economy hummed along, until the Soviet Union unexpectedly collapsed in 1991. Most economists believed that German reunification would cripple the West German economy. Indeed, the early results weren’t pretty. All told, Germany spent roughly 2 trillion euros ($2.3 trillion) to provide East Germans with social benefits, to rebuild East German infrastructure and to offer a 1:1 exchange for East German currency. The situation was so grim that by 1999, an Economist report concluded that Germany was consigned to the role of “sick man of Europe” for the foreseeable future. The coup de grace of the analysis was a comparison of the freshly unified German state to the sclerotic Ottoman Empire on the eve of its collapse. At first, it seemed like the correct analysis. In 2003, after years of stagnant growth, the German economy shrank by 0.71 percent.

But then, Germany took off once more. The recipe for the second German economic miracle bore little resemblance to the first. Germany’s fertility rate continued to decline throughout the 1990s and 2000s. But Germany compensated for this by taking advantage of cheap labor in Eastern Europe. By relocating production to the east and introducing German technology and industrial production methods, costs plummeted and productivity soared. The establishment of the common currency in 1999 helped make German goods more competitive throughout Europe and put an end to the volatile effect German boom-and-bust cycles had on the deutsche mark. Good policy also helped. Brought to economic crisis and sporting stubbornly high unemployment rates relative to the rest of Europe, especially in the former East Germany, the German government had no choice but to enact major labor market reforms as well as large cuts to the aging country’s long sacrosanct welfare state. 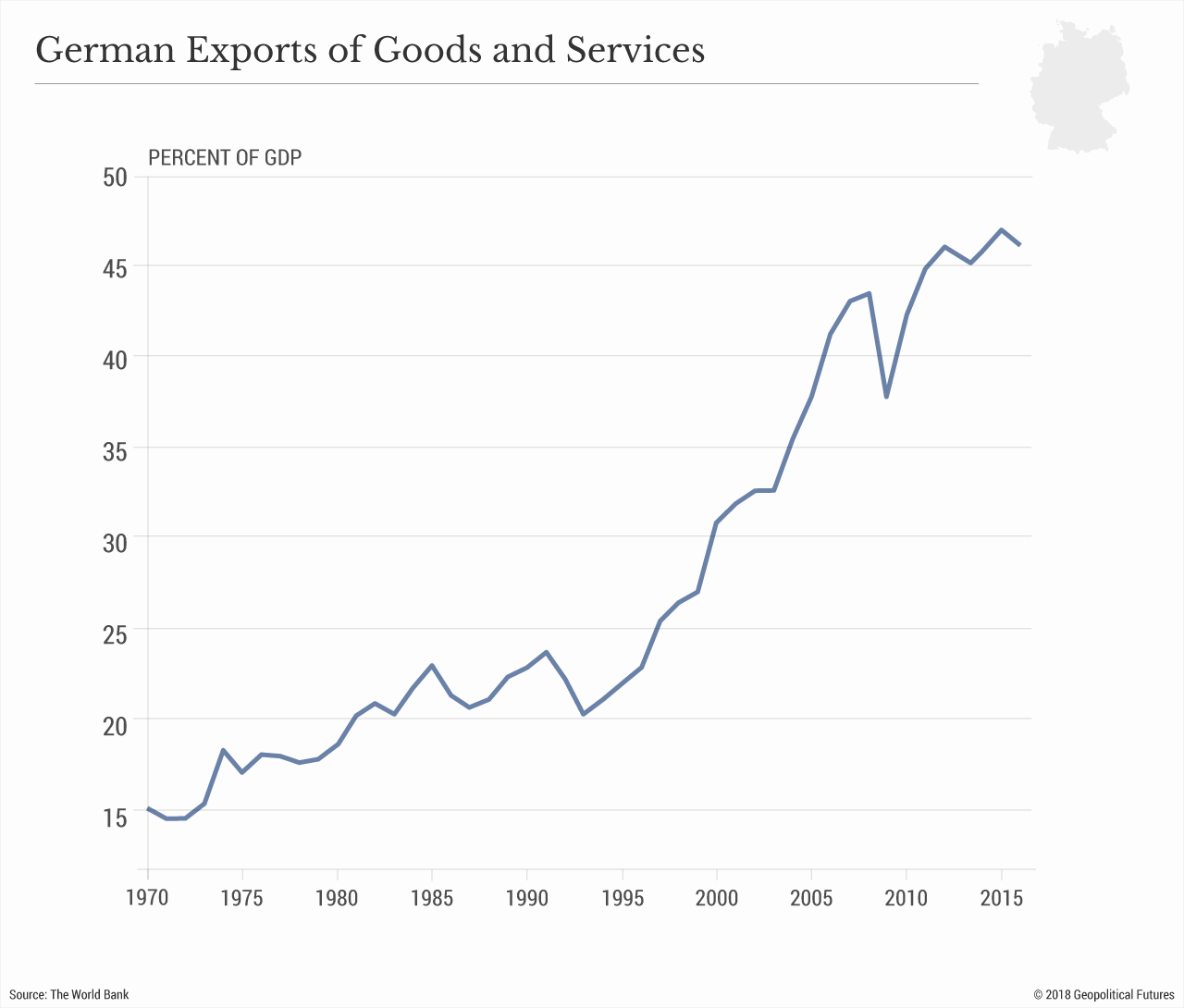 The combination of these developments worked. The German economy went from shrinking to growing at almost 4 percent annually. But the seeds of the current crisis were laid in the very solutions that allowed reunified Germany to prosper. Germany became addicted to exports to fuel its economy. In 1991, Germany’s economy depended on exports for 27.3 percent of its gross domestic product. According to the World Bank, that figure had climbed to 46.1 percent by 2016. For the Eastern European countries that have become part of the German supply chain, this number is astronomically larger.

Furthermore, the labor reforms that kick-started the German economy and reduced unemployment to record lows had an unfortunate byproduct: economic inequality. In many cases, the rich got richer while the poor simply got less generous government benefits. Monetary easing policies enacted after the 2008 financial crisis aggravated the problem, to the point that Germany now has the second-highest wealth inequality rates among Organization for Economic Cooperation and Development countries (only the United States outdoes Germany in this regard). 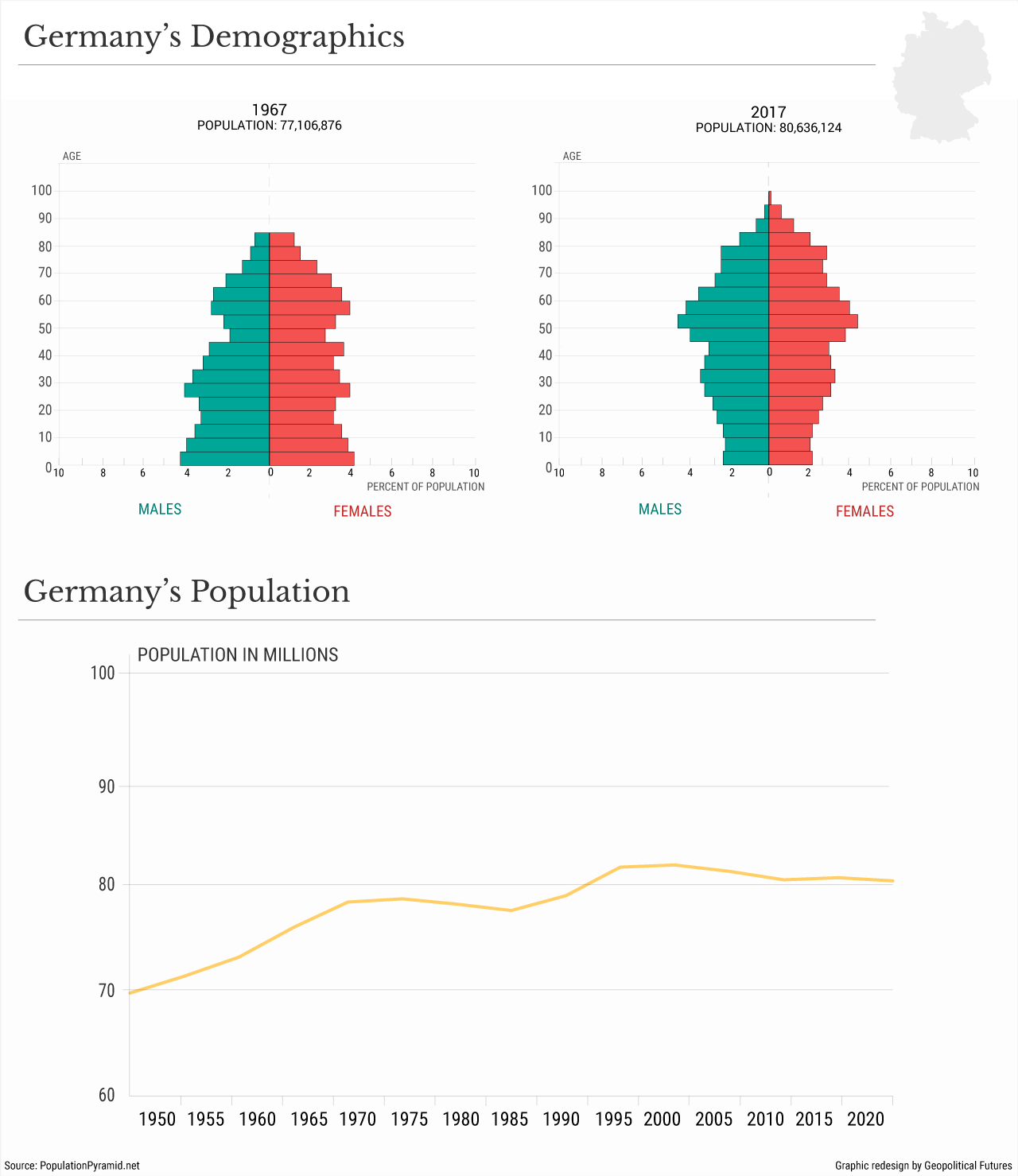 These are the real problems Germany faces. There are no more labor productivity gains to be made – Eastern European labor productivity rates surpassed that of German workers years ago. There are no more babies to be had – fertility rates hit a 43-year high in 2016, but at 1.59 it is still far below the replacement rate of 2.1, and its population is one of the oldest in Europe. There is no new, large market to sell to – China is trying to increase domestic demand, the U.S. has turned protectionist, Europe is oversaturated, and the purchasing power of the average Russian wouldn’t make much of a difference even if EU sanctions weren’t preventing Russian-German economic relations from deepening. And all of this is to say nothing of Germany’s antiquated education system, high corporate tax rates, 20th-century digital broadband connectivity infrastructure and hierarchical company structures that stifle innovation. Even in the areas where Germany is supposed to excel, like cars, Germany’s best days seem behind it. Volkswagen, Audi, Porsche, BMW and Daimler have now all been accused of distorting emissions and are recalling hundreds of thousands of vehicles in what has become known as “Dieselgate.” Last but not least, Germany’s banking system is in shambles.

There is a silver lining to these clouds, however. Germany is not in the throes of a crisis yet – it is standing on the precipice. And when modern Germany (i.e., post-1871) reaches serious moments of crisis, petty political squabbles are usually put aside, and the German population responds with a social discipline that few other nations in the world have ever matched. For example, Germany’s industrial plant survived World War II intact, but the German rail system did not. On V-Day 1945, only 10 percent of German railways were operational. Just 13 months later, West Germany had rebuilt 93 percent of its railroad system, which included repairs on 800 bridges. Germany had advantages – not the least of which was U.S. economic aid – but what Germany was able to do with that aid was nothing short of remarkable. The same can be said of Germany’s rapid recovery from its integration of East Germany and its subsequent sickness of the late 1990s, a process that would have crippled less coherent nations. 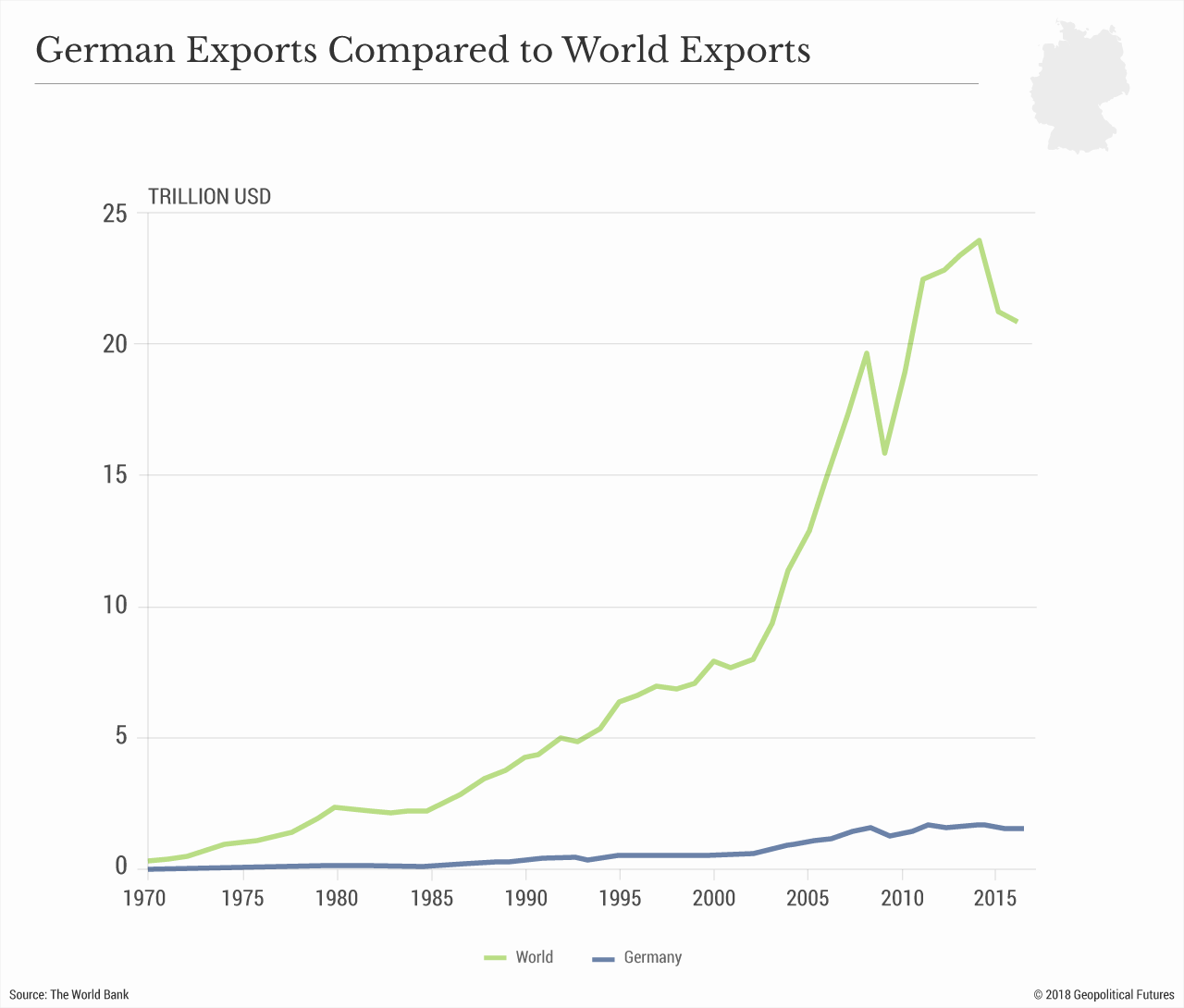 The missing piece in all this is where Germany is going to find productivity gains. In the 1950s, it was the population explosion, and in the 2000s, it was Eastern Europe. The only saving grace of the German economy right now is healthy domestic demand, but current levels of domestic demand cannot make up for the over-reliance Germany has developed on exports. Perhaps Merkel’s plan with refugees and migrants all along was to infuse Germany with a fresh batch of young people, her own version of the West German guest worker agreements of the 1950s, ‘60s and ‘70s. Perhaps her idealism was so fervent that she believed any Syrian or Somali or Afghan could be integrated into a Germany that had left its past behind and embraced the idea of a cosmopolitan, multicultural Europe. Japan is in many ways the mirror image of Germany, with a shrinking population and export dependence of its own, but Japan prepared for its current predicaments by sacrificing growth for almost three decades. Germany took the money and ran – and now the bill is coming due.

The inequity of Germany’s predicament is hard to escape. Germany is simultaneously the boogeyman and savior of the European project. German economic growth and Germany’s handling of the 2008 financial crisis made eurozone countries extremely uncomfortable – that is, until the prospect of German economic growth stalling became a realistic possibility. Germany’s consistently paltry defense spending – well below the agreed-upon 2 percent by NATO countries – is a problem for its NATO allies. But if Germany actually began remilitarizing, hysteria about the imminent return of Teutonic knights, Frederick the Great’s tall Prussian soldiers and Nazi Panzer divisions would soon ensue. Even now, as anti-German sentiment has increased across the European Union, pro-EU officials look to Berlin for the answers. So far, the best response they’ve gotten appears to be, “Ask Paris.”

And yet despite this dissonance, the fear is not exactly unreasonable. Germany’s predicament may be unfair – but then, Germany has much to pay for. The hypocrisy of Germany’s enforcing austerity on Greece while it sat on large trade surpluses, or its lambasting the United States without any sense of appreciation for the tax dollars U.S. citizens sent to rebuild a once-mortal enemy seems lost on a German government that, with the best intentions, believed the lions had already lain down with the lambs and the swords had already been beaten into plowshares. Now Germany, which ascended to its position on the backs of the euro and the U.S., must look to its own national interests, and try to defend them without imposing its will on its European neighbors. If Germany can find a way to do that, perhaps there is room in history for miracles after all. Either way, the storm clouds are gathering, and the world waits to see if lightning will strike a third time.