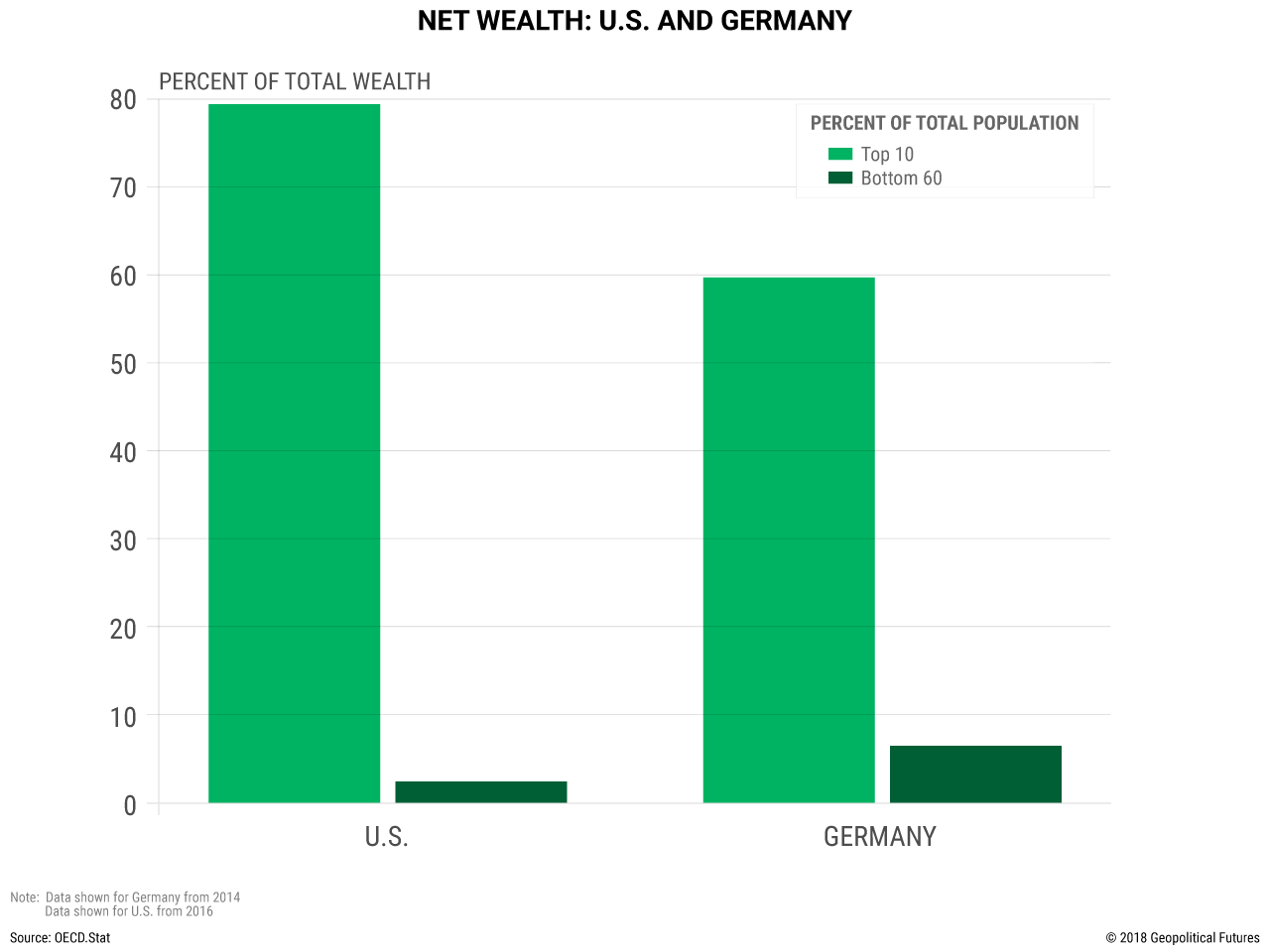 Of the 28 countries that report wealth distribution data to the Organization for Economic Co-operation and Development, Germany and the United States stand out. In Germany, the bottom 60 percent of the population possess just 6.5 percent of wealth in the country, the lowest figure in Europe. In the U.S., the bottom 60 percent possess just 2.4 percent – the lowest figure of any reporting country. The top 10 percent of both countries, on the other hand, account for a disproportionate amount of wealth – nearly 60 percent in Germany and nearly 80 percent in the U.S., the two highest figures of reporting OECD countries.

In the case of Germany, this seems particularly mystifying. The country is enjoying record-low unemployment rates, and by all accounts, its economic growth has exceeded even the more optimistic projections (full disclosure: ours was not so optimistic). But these figures tell only part of the story. The real issue is inequality, in terms of household wealth and real income. Germany may be a rich country – the average net wealth per household is about 214,000 euros, or $265,000 – but the median net wealth per household in Germany is about 61,000 euros. For reference, that’s about 4,000 euros less than it is in Greece, which Germany almost kicked out of the EU for its profligacy. On a per household basis, the bottom half of households in Germany possess less wealth than the bottom half of households in Greece.

And things are getting worse. While unemployment has steadily decreased since 2009, jobs are not translating into increased wealth for the lower and middle classes. From 2009 to 2016, unemployment declined in Germany by roughly 2 percent. At the same time, the relative poverty rate – defined by Germany’s Federal Statistical Office as the “percentage living in households with an income below 60 percent of national average” – rose about 2 percent. That is not so much a measure of increased poverty as it is increasing wealth for Germany’s top wage earners, as more and more Germans find that the same salary they made a few years ago now puts them below the poverty level.

Income inequality is a much older issue in the United States. Modern income and wealth inequality in the U.S. has been creeping upward since the 1970s. President Donald Trump’s surprising electoral victory in 2016 was at least partly a political expression of that underlying dynamic. It is no coincidence that in the years before Trump’s election, the share in total income of the top 10 percent of all U.S. earners rose to just under 49 percent – a share surpassing that of any time during the Great Depression. This type of wealth inequality is a refrain in U.S. economic history that produces massive political change, of which Trump is likely just a precursor.

The 2008 financial crisis aggravated the problem. The median income in the United States is at a record high – but when you look at median wealth figures divided by lower, middle and upper income, you see that only the upper income levels have recouped the wealth lost during the financial crisis. Lower- and middle-income U.S. households are still doing worse today than they were in 2007. Like Germany, the United States is also enjoying low unemployment rates – 4.1 percent in December 2017, according to the U.S. Bureau of Labor Statistics. Again, though, employment doesn’t tell the whole story. The Federal Reserve Bank of St. Louis noted in a report this past month that the net increase in jobs created since 2000 – roughly 17 million jobs – has been among workers 55 and older. Jobs don’t help if they don’t pay enough and don’t create opportunities for young workers.

These problems demand Washington’s full attention, and the government is too preoccupied by its own political affairs to do much abroad. Meanwhile, Germany has no government, and whatever government it eventually forms will be weak and hypersensitive to domestic concerns about inequality and immigration. The U.S. government is bickering with itself instead of solving some key problems at home or abroad. In that sense, it is working the way the Constitution designed it in 1789: without the rest of the world in mind. In 2018, that has global ramifications.