A bomb was detonated on a Russian subway train Monday afternoon, killing at least 11 people and injuring dozens. As of this writing, no one has claimed responsibility for the attack. The impact on President Vladimir Putin’s government will heavily depend on who orchestrated the bombing. If it was a Chechen group, for example, it could hurt Putin’s credibility. This is because early in his first presidency, Putin established a popular base by invading and violently suppressing Chechen separatists. A Chechen resurgence has the potential to make Putin look incapable and weak, which are unacceptable qualities for a Russian leader. One known consequence of this attack, regardless of the perpetrators, is that the Russian government will try to spin it to the Kremlin’s advantage. This speaks to the deeper question of how the Kremlin controls information.

The bombing is important but represents a small blip amid a number of challenges facing Putin. The economy is declining and the opposition is growing in organization and power. Both of these developments present ongoing threats to the regime. To influence public perception of its increasingly weak position, the Russian government will try to control how the media reports this week’s attack. This is not new – Russia has long used different forms of propaganda as a tool to sway popular opinion. However, Russian citizens’ response to government-directed information is changing, from begrudging toleration to growing skepticism. 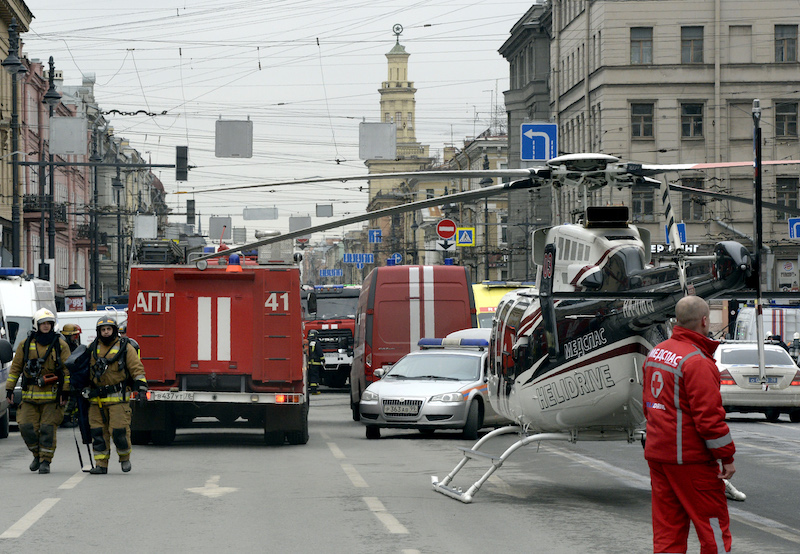 Emergency services personnel and vehicles are seen at the entrance to Technological Institute metro station in St. Petersburg on April 3, 2017. OLGA MALTSEVA/AFP/Getty Images

Geopolitical Futures discussed in a prior piece how the effectiveness of propaganda relating to a regime’s international activities weakens and can dissolve entirely when its message no longer bears a semblance to reality. For example, Putin has appealed to Russian nationalist identity by projecting an image of strength abroad. Russia’s intervention in Syria was effective in bolstering support for Putin because it made Russians proud of their nation’s might, and it partially restored the country’s image as a global power. Putin’s portrayal of Russian military strength matched up, at least somewhat, to reality. Propaganda related to domestic issues, however, has been more difficult to deliver. The Russian government’s strategy of maintaining social stability by invoking nationalist sentiments is proving increasingly problematic as the country’s economic situation deteriorates.

The unauthorized March 26 protests organized by opposition leader Alexei Navalny signal a disconnect between how Russia’s domestic conditions are being presented in propaganda and the reality experienced by most Russians. The concept of Russian strength, dependent at least partly on the perception of a healthy economy and stable institutions, is difficult to square with ongoing financial challenges, such as cuts in pensions and other declining social services, and the persistently corrupt political environment. That these protests occurred in 99 cities across the country – many of which are relatively poor, conservative and dependent on central government handouts – is a sign that this dissatisfaction is not restricted to the most progressive strata of Russian society.

Lessons from the Past

The rich tradition and history of propaganda in both the Soviet Union and Czarist Russia reveal two things about the country. First, it is difficult to rule a country that spans 11 time zones and is vulnerable to invasion. Second, Russians have an impressive ability to unify and endure in extreme situations if given a sufficiently convincing message to unite behind. Propaganda was used in the Soviet Union to siphon off incoming information from the West to unite against an ideological enemy. In World War I, Czar Nicholas II encouraged purchases of war bonds to defend against the invading Germans despite social upheaval that was destabilizing Russia.

The use of propaganda in Russia grew following the 1904-05 war with Japan. After the Russian military moved east to confront Japan, space was created for an anti-regime movement that opposed a number of political and economic issues that had developed over the previous five decades, such as unserviceable taxes placed on peasants’ small land lots. The czar’s mishandling of the war further fanned the flames of revolution. Russia was losing and decided to speedily conclude the war with Japan, moving its military back to the west to put down the rebellion. In 1905, Russia’s still-intact military was able to restore order (which was not the case in 1917 after the Russian military had been devastated). But to diffuse the ire directed at the czarist government, the regime encouraged anti-Semitic propaganda that either blamed Jews for aiding the war effort or stoked pre-existing fears of Jewish control of industry. Two famous examples of propaganda from this period include “The Protocols of the Elders of Zion,” a fake document that supposedly recounted a meeting of Jews conspiring to take over the world, and the demonization of Jacob Schiff, a Jewish banker who extended a loan to Japan in 1904 to aid in its war effort against Russia.

While propaganda was less common in Russia before 1905, the need for it grew following the Emancipation of the Serfs in 1861, which came about partly as a result of Russia’s defeat in the Crimean War in 1856. For hundreds of years, the Russian nobility were divided through both geographical separation and a governmental power structure that resulted in almost complete dependence on service to the czar. Until the 18th century, all male nobles were required to serve lifelong careers in either the military or civil service. The czar also tightly controlled new land grants and the transfer of intergenerational wealth. While the nobility owned serfs, they did so at the czar’s pleasure through service grants and relied directly on the czar’s control of the military to prevent any uprisings against them.

Russia’s defeat in the Crimean War exposed a great disconnect between the image of strength projected by Imperial Russia and its actual capacity to muster resources from its serf-based, agrarian economy in a confrontation against industrialized powers. Serf revolts increased during and after the war, leading Czar Alexander II to declare that it was “better to abolish serfdom from above than to wait until it will begin to abolish itself from below.”

This was an emancipation more in name than in practice. Former serfs were unable to move from their newly “given” plots of land and were also responsible for paying taxes. These changes kept the serfs tied to a single location and beholden to the local aristocracy, which was in charge of tax collection after the emancipation. It was a move meant to diffuse the pressure from liberal sentiments without actually granting any new freedoms. Nonetheless, freeing the serfs required that the nobility accept the serfs’ new legal status and hand over parts of land that they had previously considered exclusively theirs. It also placed greater responsibility on the central government in managing the peasantry, thereby creating the need for more direct messaging to sway mass opinion.

Today, the regime’s challenge isn’t sending directed messages to the Russian people but preventing the dissemination of unwanted ones. The government tightly controls Russian media and social media platforms like VK.com and OK.ru, which have tens of millions of users. However, Navalny was still able to create a video that received 15 million views and was used to turn out approximately 70,000 protesters across the country. Navalny’s intercity volunteer networks were able to quickly exploit the attention the video received and transform it into physical action. The protests revealed that this political infrastructure was better developed than the government had previously recognized and was able to turn calls to action from mere annoyances into more serious threats to the regime.

Last week, the Russian Education and Science Ministry announced a new social media campaign to encourage “moral and patriotic upbringing” among young people. This is just one program funded by the growing Russian state budget for patriotic education. However, people willing to publicly challenge the Putin government are beyond the point where “patriotic education” can be wholly effective, which is why the government is focusing more of its efforts on Russia’s youth. Approximately 80 percent of the growth in the 2016-2020 budget is in Ministry of Education programs. The Russian government is trying to inculcate greater loyalty to the state among young people who have not yet been exposed to conflicting political ideas. For the previous generation, an appeal to unity could be made by referring to the chaos of the post-Soviet 1990s. But Russia’s young adults did not live through these times and therefore cannot compare their current political dissatisfaction to those from a prior era. 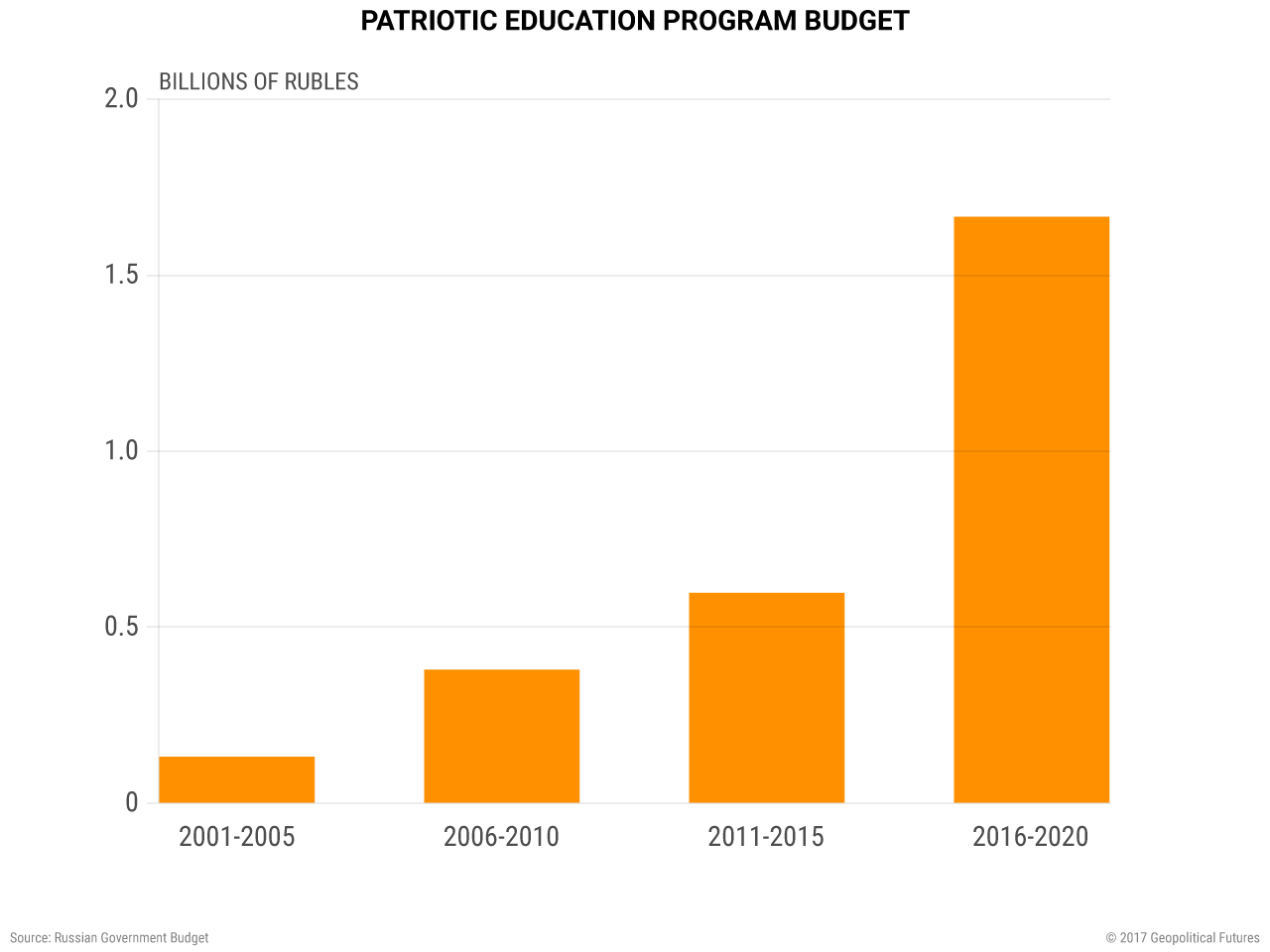 A regime that feels threatened will resort to more overt forms of repression to control a particular group that has become resistant to its propaganda. This can be done with detentions – approximately 1,000 demonstrators were arrested in Moscow alone during last week’s protests – or other forms of intimidation. For example, two of Navalny’s local coordinators in the Siberian city of Tomsk were sealed into their apartment from the outside on the same day that Navalny arrived in town for a rally. As propaganda becomes less effective, and as groups not influenced by propaganda grow, the use of physical violence will increase. This will be a sign that the Russian government is struggling to maintain its grip on power and needs a more immediate method to suppress dissent.

Of course, Russia isn’t unique. All countries use forms of propaganda. But despite Russia’s substantial efforts in constructing state-approved media channels and alternatives to Western social media platforms, its propaganda efforts are beginning to fail. How Russia manages the coverage of the metro bombing will heavily depend on who ends up claiming responsibility for the attack. Regardless, that coverage will be managed amid an environment in which Russia’s propaganda efforts are becoming less impactful. The recent protests are an indication that a turn to more violent methods of repression will be coming.

What We’re Reading: The Legacies of Peter the Great and the...