On March 26, an estimated 70,000 Russians participated in anti-Kremlin rallies in 99 cities across the country. Geopolitical Futures forecast that Russia would have economic and political problems in 2017 due to continuously low oil prices. Mounting wage arrears, localized banking crises, cuts to government spending, and decreased purchasing power have laid the groundwork for social unrest, particularly in the country’s interior regions. These protests show seemingly coordinated unrest, including in metropolitan centers like Moscow and St. Petersburg. This suggests that control by the regime in Moscow is becoming more tenuous, and it raises the question of whether our forecast was too conservative.

Our forecast envisioned a scenario of sporadic, minor unrest in small towns and cities that would increase in magnitude and intensity throughout the year. But it is only March, and tens of thousands of people already have taken to the streets, including in major urban areas, to express disapproval of President Vladimir Putin’s administration. The increase in scope and intensity has occurred at a faster pace than originally thought. 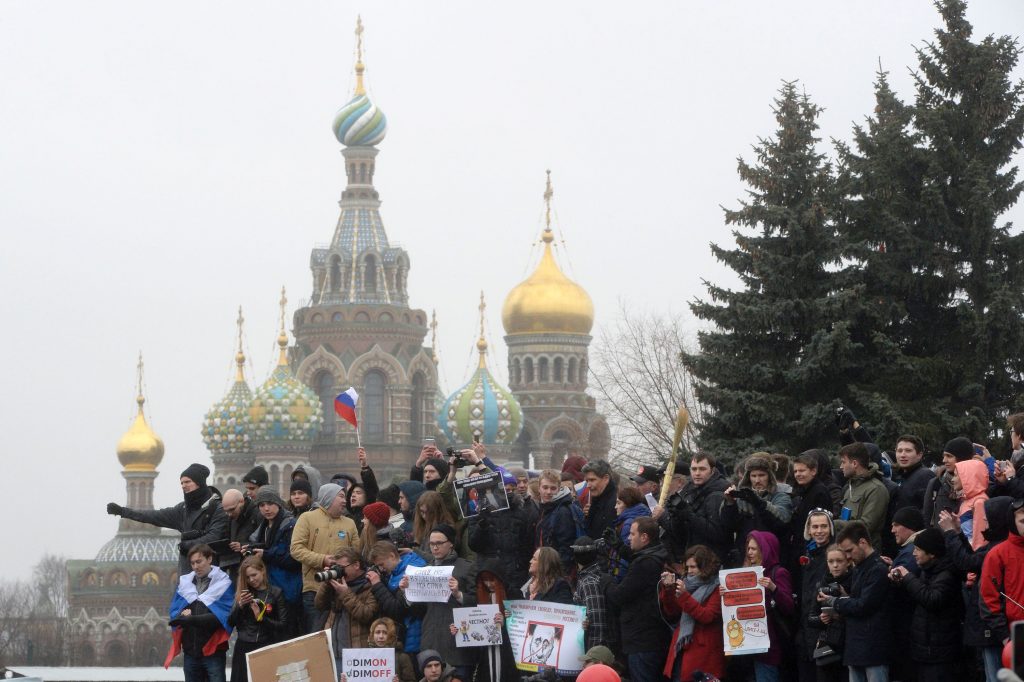 Opposition protesters rally against corruption in St. Petersburg, Russia, on March 26, 2017. Tens of thousands of Russians demonstrated across the country, defying bans on rallies called by prominent Kremlin critic Alexei Navalny, who was arrested along with scores of others. OLGA MALTSEVA/AFP/Getty Images

On March 26, opposition forces demonstrated a higher level of organization and strategic sophistication than previously seen in the last five years. The nationwide protests marked the culmination of a detailed campaign orchestrated by the opposition, which has proven its ability to successfully incorporate strong media elements into its strategy. Opposition leader Alexei Navalny’s Anti-Corruption Foundation spent months compiling research for an in-depth report proving extensive corruption by Prime Minister Dmitry Medvedev. The foundation also organized a media campaign to promote the report’s release, including an English translation of the report. Furthermore, activists extensively used Russia’s largest social media network, VKontakte, to help organize and increase participation.

The opposition has managed to grow its political presence throughout Russia by setting up and maintaining campaign offices. Navalny has offices in Vladivostok, St. Petersburg (where his headquarters are located), Nizhny Novgorod, Chelyabinsk and Kazan, among other locations, though the sizes and numbers of these offices are unknown. Navalny’s offices and those of other opposition forces helped build a nationwide network. Multiple locations became engaged in protest planning, including requesting protest permits 10 days before the actual march.

Evidence also suggests the opposition has a broad strategy for coordinating tactical-level events. March 26 was not an arbitrary date: It was the anniversary of Putin’s first presidential election in 2000. Local reports noted that Navalny promised legal and financial aid to protesters who were arrested. The underwriter of this operation is unknown. But if Navalny delivers on his promise, it would indicate above-average sophistication. This level of support for activists is logistically more complex than convincing people to march is. It involves fundraising, organizing legal representation and tracking the individuals who were arrested.

The protests’ scope and locations draw attention to how Moscow’s control over the country is at risk. When towns began requesting protest permits on March 15, Russian media anticipated events in 52 cities. Instead, 99 cities participated in the protests. The geographical diversity of protests also illustrates the breadth of discontent with Moscow, which spans well beyond isolated pockets in the countryside. Government critics were seen from Dagestan in the North Caucasus to Vladivostok on the Pacific Coast – and everywhere in between, including Moscow.

Also potentially problematic for the Kremlin – and illustrative of the regime’s declining power – is that these protests occurred after Putin spent the last year attempting to consolidate power at regional and local levels. Political stability and security go hand-in-hand in Russia. Putin is well aware that his control is no longer a given, and he must work to maintain it. He has created a National Guard, reshuffled the FSB, reinforced military posts and purged the interior and emergency ministries. All of these moves were intended to give Putin more direct control over local populations.

The March 26 protests support our forecast that 2017 will be an inflection point in Russia’s long-term destabilization. The opposition has proven more capable of organizing than previously understood. Putin did not prevent the protests or keep them at bay, but rather downplayed their scale and significance in the media. This means either his attempts to consolidate power have not rendered the control he needs or he is manipulating the security environment for a future crackdown. At this point, we do not foresee the end of the Putin regime this year. In the lead-up to 2018 presidential elections, each side’s ability to gain or retain momentum and strength will be critical in deciding the degree of control Putin maintains over Russia. The opposition’s ability to repeat this year’s anti-government demonstrations at an equal or greater scale and the reaction by state security forces will help further measure the proximity of Russia’s breaking point.

Russia’s Choice: Its Buffer Zone or Its Economy

Daily Memo: The Race for a Coronavirus Vaccine

Brazil and France, at Loggerheads on Trade