U.S. President Donald Trump’s decision to withdraw from the Paris climate agreement is indicative of a problem that has hampered his presidency since he came to office. There are two factions within the administration that have mutually exclusive foreign policy goals. One, centered around chief strategist Steve Bannon, advocates “America First” strategies that align with Trump’s campaign promises. The other, centered around Secretary of Defense James Mattis, wants the U.S. to continue to work with the very international institutions the America First faction is trying to get out of. The result is an inconsistent American foreign policy that strains relations with allies and causes even greater friction with enemies.

The America First faction believes that participating in international institutions and agreements weakens U.S. power. Members of this faction want the U.S. to withdraw from the Paris Agreement, get tougher on trade with China, renegotiate NAFTA, and insist that NATO and other American allies pay their fair share of defense costs. If the U.S. decides cutting carbon dioxide emissions is in its interest, then it should do so, but cutting emissions only because a multilateral agreement obligates it to is a slippery slope and could infringe on U.S. sovereignty. Withdrawing from the Paris Agreement is a major symbolic victory for this faction. 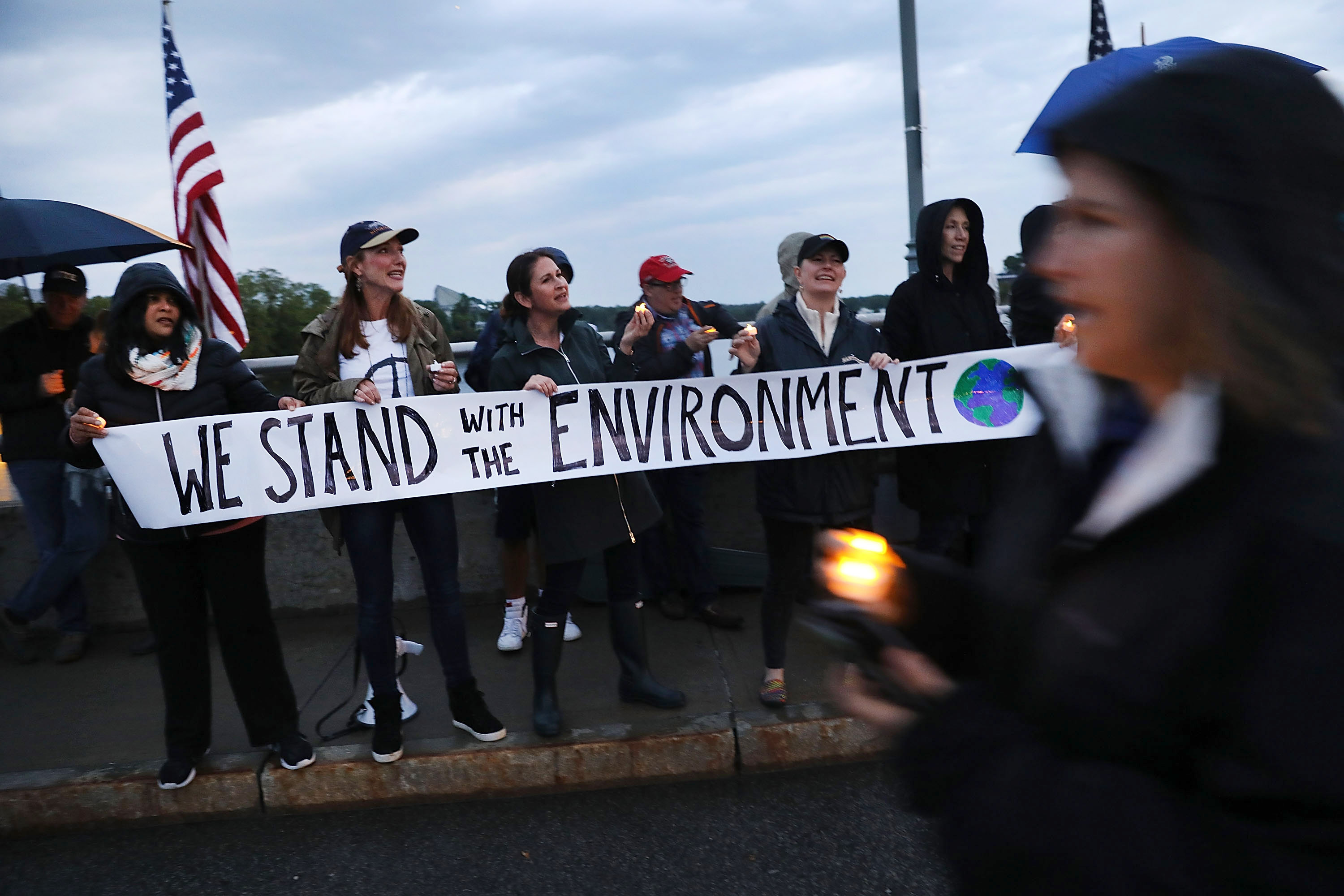 Dozens of Connecticut residents converge along a bridge at a vigil and rally for the environment and against President Donald Trump’s recent decision to withdraw the United States from the Paris climate accord on June 4, 2017, in Westport, Connecticut. Platt/Getty Images

But it was a major disappointment for the second faction, which promotes international agreements and cooperation. One of the more prominent members of this group is the defense secretary, who has supported NATO and has focused his strategy to combat the Islamic State on a 68-member coalition assembled by the State Department. In a speech just last week, Mattis emphasized the role of international institutions such as the United Nations, the Association of Southeast Asian Nations and the International Monetary Fund in promoting prosperity in Asia and protecting countries from Chinese ambitions.

These are mutually exclusive worldviews, and they generate mutually exclusive foreign policies. On the one hand, Trump is pulling the U.S. out of the Paris Agreement. On the other hand, his secretary of defense and secretary of state are relying on multilateral institutions to pursue U.S. strategic interests. Neither faction appears strong enough to defeat the other. The result is inconsistency in American strategy and confusion among allies and enemies. In some cases, this undermines U.S. power abroad, and in other cases it creates an opportunity for countries like China to make the U.S. appear weak and self-absorbed.

What the Critics Are Missing

The media and Trump’s political opposition have focused on certain aspects of his decision, arguing that it will diminish the United States’ global leadership position. In focusing on these points, the critics have missed the bigger picture of U.S. power in the world.

First, the U.S. has always distrusted international institutions, but this has not destroyed U.S. power in the world. The U.S. has at times advocated their necessity, but it always made sure to preserve U.S. sovereignty, even at the expense of the efficacy of these institutions. The U.N. has been rendered powerless many times by the veto power of the Security Council’s permanent members. Its weakness is, in part, by American design.

Withdrawing from the Paris Agreement is, moreover, not unprecedented; many international treaties have failed to get through the American political system. For example, the U.S. Senate rejected the Treaty of Versailles, which established the League of Nations. Bill Clinton signed the Rome Statute in 2000, committing to join the International Court of Justice, but failed to get it ratified by Congress. The Paris Agreement’s predecessor, the 1997 Kyoto Protocol, was another agreement Clinton signed but couldn’t get ratified. George W. Bush announced his unwillingness to implement Kyoto just a year into his presidency. In each of these cases, the decision to withdraw from an international agreement was met with much criticism from people claiming it meant the U.S. had lost its standing as a global power. Each time, it wasn’t true.

Second, the Paris Agreement is unenforceable as written. The countries that have ratified the deal have agreed at the broadest level to cut carbon dioxide emissions. The quotas for these cuts, however, are to be decided country by country, and nowhere in the agreement is the issue of enforcement raised. There is no guarantee that the ratifying countries will cut emissions to the levels promised in the agreement, and there is no accountability for any country that decides to cheat. The best way to judge the efficacy of an international agreement is to look at the consequences for a signatory that fails to live up to it. By this standard, the Paris Agreement is a toothless initiative.

Last year’s OPEC agreement to cut oil production and boost oil prices is a prime example of why enforcement is a huge problem for such agreements. OPEC and non-OPEC oil exporters, including Russia, have every interest in keeping oil prices high, which is why they agreed to cut production. But despite their shared interest in abiding by this deal, Russia has fudged its numbers, claiming to have met its obligation when, in reality, it raised crude production in January and March 2017 compared with the previous year. This is a much smaller group of countries with a far more tangible goal (increasing oil prices) – and even they can’t stick to the terms of their agreement. The Paris deal apparently includes an unwritten suspension of the laws of human nature that allows it to avoid the prisoner’s dilemma inherent in the agreement’s framework.

The harshest critics of Trump’s decision to pull out of the Paris Agreement believe climate change is destroying the planet. That is a serious issue, but if meaningfully cutting carbon dioxide emissions is the goal, this deal is not going to achieve it.

Third, withdrawing from the Paris deal does not preclude the U.S. from cutting emissions if it so chooses. The previous administration pledged a 26-28 percent cut in greenhouse gas emissions from 2005 levels by 2025, and there’s no reason the U.S. can’t still meet that target. If major U.S. companies support emission cuts, they can reorganize their businesses to achieve them. If individual U.S. states want to cut emissions, they can implement measures to do so. And if a majority of the American population wants to reduce emissions, they can elect representatives who support such reductions. Other countries will cut emissions if it is in their interest to do so, and the same is true of the U.S.; a piece of paper printed in Paris doesn’t change that reality.

Fourth, President Barack Obama bypassed the Senate to enter the agreement in the first place. The legality of this action is questionable at best, but it certainly violated the spirit of the Paris Agreement itself, which stipulates that it must be approved by states, not heads of states. The agreement’s supporters in the U.S. also point out that even major energy corporations like Chevron and BP support the deal. The irony that environmentalists and liberal internationalists are taking their lead on climate change from a company like BP is lost on them.

Fifth, some have argued that withdrawing from the Paris Agreement cedes the future of the world order to China. This notion coincides with Beijing’s other supposed successes: It is working on the hugely ambitious One Belt, One Road initiative, constructing islands in the South China Sea and building aircraft carriers, and it will soon have a middle class exceeding the population of the United States. Withdrawing from the Paris Agreement is just the cherry on top – now, China will also become the world leader on climate change (even though it won’t be cutting its emissions until 2030, if it lives up to this pledge at all).

But this perception is not accurate. China is not on its way to challenging U.S. global supremacy, and the above examples indicate why. It’s not clear how China is going to fund One Belt, One Road. The U.S. has 11 aircraft carriers; the Chinese have two. China may have a burgeoning middle class, but it also had more people living on less than $3.10 a day in 2010 than there were people in the United States. The U.S. has become somewhat inept at communicating its position, but its power relative to other countries remains overwhelming.

The media has made the case that the U.S. has abdicated its global responsibilities by leaving the Paris Agreement. This view acknowledges one aspect of American foreign policy while missing several others. The U.S. is the primary country in the world gearing up to deal with a North Korean regime that seems bent on developing nuclear weapons at any cost. The U.S. is leading the fight against the Islamic State. American soldiers are deployed in Eastern Europe to hold the line against potential Russian aggression. The specter of a U.S. recession is casting a heavy shadow on many of the world’s largest economies, because when the U.S. sneezes, the rest of the world catches a cold. The U.S. has chosen not to participate in an international agreement of limited importance, but that doesn’t mean that the U.S. has withdrawn from the world.

U.S. power is not waning; it’s maturing. One man’s isolationism is another man’s self-reliance. Maturation, however, is not a linear process. The battle raging within the Trump administration is a microcosm of an old argument that has been reanimated across the country between those who want to focus on domestic issues and those who want the U.S. to be a global leader.

What makes this different from previous iterations of this argument is that isolationism is not a viable way for the U.S. to conduct its foreign policy in the long term. The U.S. is the only global power in the world, and other countries look to it for leadership. They praise the U.S. when the U.S. lives up to their ideas about what it should be, and they castigate the U.S. when it disappoints them. Often this has very little to do with the U.S. and everything to do with what those other countries think about themselves.

In this case, though, the world sees the U.S. as it is: in a state of confusion. The U.S. insists that national interests are and ought to be the organizing principle of global politics, while simultaneously insisting that multilateral institutions are needed to help combat global threats to the liberal world order it helped build after World War II. The U.S. is trying to figure out how to be a global power. Withdrawing from the Paris Agreement will be consigned to the dustbin of similar moves in U.S. history. But the unpredictability of U.S. foreign policy has the power to reshape geopolitics, and it will do so for years to come. That is a marker of just how powerful the U.S. is. Its self-doubt is not contained by the oceans.