I’m writing this from London and heading from here to Poland and Hungary. This seems like a trip from one Europe to the other. In fact, at this point in history, these places have a great deal in common. They are each on Europe’s periphery, trying to define their relationship to Europe and trying to cope with the radical implications of the right to national self-determination.

Europe’s core since the late 19th century has been Germany, France, Belgium and the Netherlands. In some ways, this was Charlemagne’s Europe, which was the organizing core of the European Peninsula. These countries, with the addition of Italy and Luxembourg, also established the European Coal and Steel Community, which eventually evolved into the European Union. Together they account for a substantial proportion of Europe’s wealth.

Europe’s periphery consists of the countries and regions that surround this core: Scandinavia, the British Isles, Iberia, the Balkans and what used to be called Eastern Europe. A strong argument can be made that Italy also should be considered part of the periphery. Italy had been the center of a great Mediterranean empire in the distant past, but it was never part of the Europe that Charlemagne created. 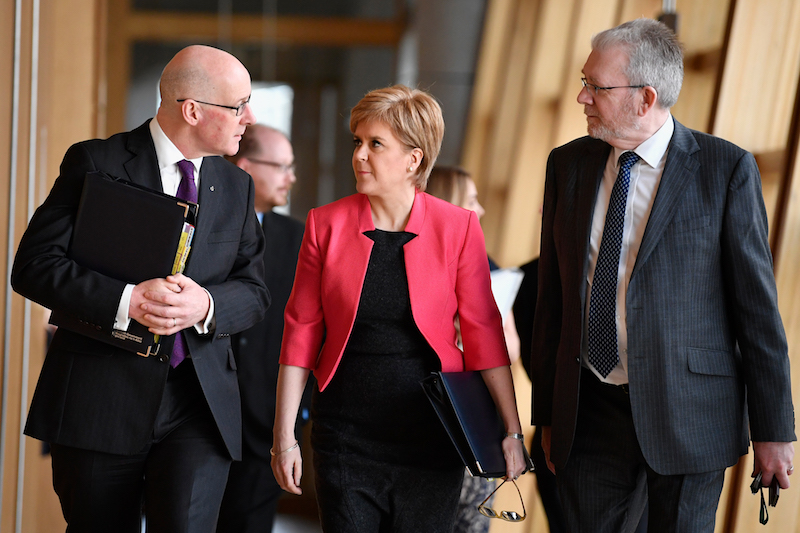 First Minister Nicola Sturgeon arrives for First Minister’s Questions with deputy John Swinney and Brexit minister Mike Russell inside the Scottish Parliament on March 16, 2017 in Edinburgh, Scotland. The first minister faced questions in parliament for the first time since announcing her intentions to hold a second Scottish independence referendum following the U.K.’s decision to back Brexit and leave the European Union. Jeff J. Mitchell/Getty Images

The European Union tried to envelop the periphery and the core into one structure. In theory, it was to be a union of equals, but increasingly it has become a periphery rotating around a core. Within the center, the periphery rotated around the true core – Germany. This pattern remained until 2008 when the rotation became less of an orbit than a centrifugal force.

In England – and I choose that term to distinguish it from Britain – the centrifugal movement is now palpable, and the movement away from the center shows every prospect of shattering Britain. I was at a financial conference in London where the major issue, reasonably, was the future of the economy. While important, that is not the most significant question facing Britain. Far more important than Brexit’s financial implications are whether Scotland will end its union with England and what Northern Ireland will do.

The idea of Scottish independence is rooted in the fact that the Scots see themselves as a different nation from the English. There has always been an undercurrent of Scottish nationalism that did not quite manifest as a very serious movement until now. Part of the Scottish argument for independence pivots on economics. But the more important force is the one sweeping Europe: nationalism and self-determination. The Scots want to be Scots because they are Scottish. It is hard to build this into an economic optimization model, but that is the weakness of economics.

The Scottish question arose before Brexit, and that vote allowed the issue to reignite. The Scots voted to remain part of Britain by a relatively small margin, and they believe that another round will do it. The financial community is calculating the financial impact of such a move. But the political significance strikes me as more important.

As for Northern Ireland, it has long been torn by nationalism. It is divided by Catholics, who identify with the Irish Republic, and Protestants, many of English origin, who identify with England. They waged a bloody civil war, a follow-on to a bloody rebellion that had waxed and waned for centuries. After nationalist sentiments were at least temporarily quieted, the Brexit debate introduced economic questions that could reignite the struggle for Irish vs. English loyalties.

This leads to a vital geopolitical issue. If Scotland re-emerges as an independent nation, and if English power is expelled from Northern Ireland, this would not only turn back the clock centuries, but other possibilities would emerge as well. One of the reasons the English sought union with Scotland was to make it impossible for foreign powers, particularly the French, to threaten England from the rear.

This possibility seems archaic, but it actually isn’t. Europe has major, systemic wars every century. At the moment, such a war seems unthinkable, but nothing is unthinkable in Europe. The European Union is weakening and fragmenting. And in the broader global framework, this scenario is even more likely. What an independent Scotland’s foreign policy would look like is unknown, and it may remain in some sort of confederation with England. But if not, Scotland would return to its old stance. It is weaker than England and, therefore, needs a stronger ally. England will see this stronger ally as a potential threat. Therefore, full independence and an evolution of tensions in Europe or globally could reasonably reignite a very old set of tensions to England’s north. While some assert their right to national self-determination, others will challenge that right, and that creates geopolitical complexities, to say the least.

In traveling to another part of Europe’s periphery, I will find a variation on this theme. Long ago, Poland and Hungary were both significant regional powers. In recent centuries, both lost their sovereignty at various points. Poland was divided by the Romanov, Habsburg and Hohenzollern dynasties. Hungary was part of the Habsburg Empire. After World War I, collapsing empires freed both countries, but that freedom lasted only as long as it took Germany to re-emerge. Poland was occupied by Germany and the Soviet Union. Hungary remained free, with limited freedom of action because of Germany’s power, until the Germans occupied it in 1944. After World War II, it had formal sovereignty but was actually controlled from Moscow.

Given this past, the likelihood of both nations dissolving under pressure was extremely high. Neither did, and both gained full sovereignty in 1989 when the Soviet Union withdrew from Germany. Almost immediately, Poland and Hungary were drawn into the European Union and NATO. Their primary motive was to build their economies and retain their national independence, particularly if Russia re-emerged as a power. In that sense, they promptly traded elements of their sovereignty for peace and prosperity. They would remain Poles and Hungarians but also become Europeans.

It was much the same deal as the Scots made and the Irish refused. The Scots made a deal to retain their identity but not autonomy. The Irish fought to keep both. Poland and Hungary willingly entered into Europe for two reasons. First, after experiencing fascism and communism, one of their priorities was to develop a political culture that would render them immune from the contagion. In their view, Europe had freed itself from fascism and guaranteed this freedom in an institutionalized form in the EU. The bloc would protect both countries, or so they thought. Second, the price for entering Europe would be low. They could enjoy the benefits without giving up nation self-determination, and that meant they remained sovereign.

After 2008, Europe began its ongoing move to the right and nationalism. Eastern Europe started this movement first by electing Hungarian Prime Minister Viktor Orbán and then electing a similar government in Poland a few months later. This created a strain between these countries and the EU. In the British Isles, England and Scotland sought to pull away. But Eastern European countries were pushed away.

The Polish and Hungarian governments were elected by large margins in elections mostly free of fraud. No one challenged the elections’ legitimacy. However, the EU challenged the policies of both governments on a range of constitutional shifts concerning the judiciary and the media. Neither government hid their general intentions. The voters knew and wanted what they were voting for. However, the same thing these countries hoped to gain from joining the EU, immunization against fascism, now collided with the EU’s attempt to protect its general ideology. From the EU’s perspective, what the Poles and Hungarians were doing went beyond the pale of acceptable liberal democratic behavior. From the standpoint of Hungary and Poland, they had adhered to the heart of liberal democratic behavior: Their governments had won free elections. In challenging the right of an elected government to chart its course, it was the EU that was violating liberal democratic values.

The exercise in political theory is of interest, but the heart of what I am arguing is that just as the British periphery is fragmenting, the Eastern European periphery is also fragmenting. Some regimes are now pulling away from other countries and the EU; other regimes are drawing closer. This fragmentation has critical geopolitical consequences in the short term. As the EU alienates Poland and Hungary, further fragmentation will take place as these two countries try to find a balance between Europe and Russia, rather than simply being committed to the center, particularly Germany.

It is odd to sit in London and think of the similarities between the English and the Poles and Hungarians, but in fact, they are in the same condition. They are pulling away –some would say being repelled away – from the EU and facing the geopolitical consequences. For Britain, it is a return to the configuration of the 17th century. Meanwhile Poland and Hungary are trying to establish their sovereignty outside the construct of a multinational entity. The western and eastern peripheries are undergoing not only the first experience of fragmentation but also post-fragmentation of the geopolitical system.

The EU was an attempt to freeze history in peace and prosperity. The prosperity having failed, the question of peace is now on the table. If peace fails, then the geopolitical reality shifts, and history continues.

A Note on More Personal Considerations