Tunisia is being rocked by protests. On Thursday, the country’s prime minister was booed off stage at a town hall in the southern city of Tataouine, where a general strike was taking place. The protests are about unemployment (which is over 15 percent in the country and much higher among youth) and have been ongoing for weeks. Another general strike was held earlier this month, along with a ministerial visit that failed to quell public discontent. Tunisia is a small North African country with a population of 11 million people. Before December 2010, it was best known for three things: It was the capital of ancient Carthage, it had a charismatic president named Habib Bourguiba during the heyday of Arab nationalism, and Star Wars was filmed there.

In December 2010, a fruit vendor put Tunisia on the world’s stage when he lit himself on fire to protest his harsh treatment at the hands of a female Tunisian police officer and his overall lack of economic prospects. This triggered massive protests that eventually forced President Zine El Abidine Ben Ali to flee with his family to Saudi Arabia, where he remains today. At the time, no one (including those of us working with George Friedman at Stratfor in December 2010) predicted that the Arab world was about to have an epileptic fit, or that an act of protest in Tunisia would have the potential to spread across the Arab world. But spread it did and with disastrous consequences. 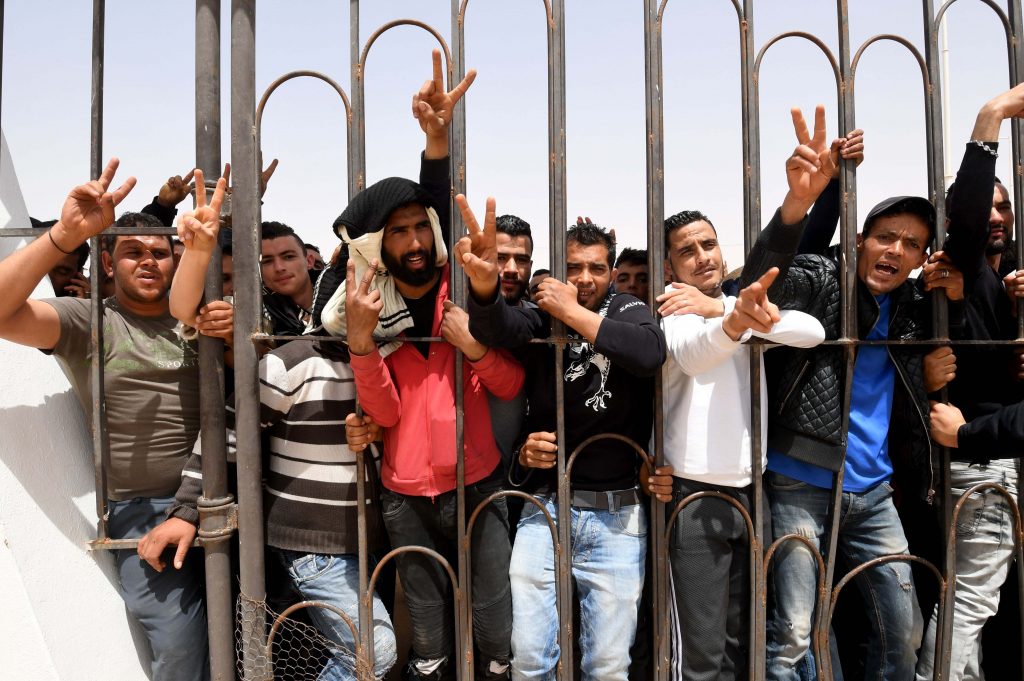 Tunisian protesters gather during a visit by Prime Minister Youssef Chahed to the town of Tataouine on April 27, 2017. Chahed was booed off stage as he addressed a town hall in a southeastern region rocked by protests and a general strike. FETHI BELAID/AFP/Getty Images

The media called it the Arab Spring. (The first use of “Arab Spring” I can find was in Foreign Policy on Jan. 6, 2011.) The administration of U.S. President Barack Obama declared that a great “new chapter in history” was emerging in the Arab world. The narrative that developed was of young, liberal, technologically savvy Arabs engaging in mass protests that were going to sweep away decades of dictatorship and bring liberal democracy to the Middle East. The Egyptian military’s removal of President Hosni Mubarak from power was interpreted as a victory for liberal protesters. The first demonstrations against Syrian President Bashar al-Assad were greeted with hope that a liberal revolution also was coming to Syria. The Libyan rising against Moammar Gadhafi and the West’s participation in toppling his regime was portrayed as justice being served.

The Western world’s wishful thinking quickly proved to be just that. In Egypt, regime change never happened. The Egyptian military was – and remains – the country’s dominant force. Egypt briefly experimented with democracy but abandoned that experiment when it led to a Muslim Brotherhood member being elected president. He was removed in a coup d’etat, and now a general is president – or at least he plays one on TV. Tunisia doesn’t have a similar tradition of military leadership, but its power centers remain the same. Power flows from the Interior Ministry, unions and old party structures that have been given new names and slogans. The current president is about to become a nonagenarian and was Bourguiba’s foreign minister. Not much of a revolution.

Where there was regime change, there was disaster. Libya and Syria can hardly be described as countries anymore. Their borders on the map are obsolete and denote areas of factional fighting based on tribes, sects or ideology. Yemen has been in a state of civil war since serious protests emerged there, which has allowed al-Qaida, the Islamic State and Iranian-backed Shiite proxies to operate within the country’s old borders and across from Saudi Arabia. Iraq developed along a somewhat different course than the rest of the Arab world due to the U.S. invasion in 2003. But IS’ rise in Iraq was related to economic hardships and power vacuums created by some of the nearby uprisings underway at the time. IS’ original name, after all, was Islamic State in Iraq.

The one part of the Arab world that has managed to maintain stability is the monarchies. Protests in Bahrain, where the ruling class is Sunni but the majority of the population is Shiite, were put down by Saudi Arabia and the Gulf Cooperation Council, which marched troops across the causeway connecting the two countries. Jordan, which should have been overwhelmed already by a massive influx of Syrian refugees, has so far managed to remain above the fray. Morocco experienced early protests but passed a few reforms. It now remains inert, without serious incentive or reason to change. Perhaps monarchies were better suited for the challenge because they operate on the absolute supremacy of the monarch. The king says do something, and it is done. Secular Arab nationalist dictators relied on ideology for their legitimacy, but that ideology was hostile to Islam. When these governments failed, they bankrupted the ideology and the people fell back on Islam rather than loyalty to nation-states.

This is the detail that was most misunderstood in 2011 as protests spread across the Arab world. Idealists and liberals were among the protesters, but the critical mass came from other parts of society. Those elements did not necessarily identify with artificial and relatively young nation-states, but rather with Islam. This does not mean that Muslims cannot be liberals, or that liberal democracy cannot coexist with Islam. In theory, it is possible. In practice, a liberal democracy has never existed in the Arab world. Western principles that undergird the notion of liberal democracy are foreign to the Arab world and the entire Middle East. Where democracy has emerged in the Middle East, it is because of European influence. Zionism was a European nationalist movement, and Turkey is as much a European country as a Middle Eastern one.

Islam is the only thing that has united the Arab world under one banner. Secular Arab nationalist dictators all cracked down on political Islamist movements because they were afraid of the potential challenges these movements posed. The dictators were right to be afraid. Former Egyptian President Anwar Sadat was assassinated by a precursor to al-Qaida called the Egyptian Islamic Jihad. IS has ruined Tunisia’s tourism industry by attacking its beaches. The signs of Islam’s violent reaction to being kept under wraps in the Arab world for most of the 20th century already were emerging in the 1980s. But no one in the West knew what to make of them. The best analyst of the time may have been Osama bin Laden, whose main goal for al-Qaida was popular disillusionment with the secular dictatorships that he felt had bled the Muslim world dry. Bin Laden did not achieve his goal, but he did turn out to be right in his analysis of the Arab world.

Tunisia was the country that gave hope to the Arab Spring optimists. These optimists see fallout from the Arab Spring and claim that all liberal democratic revolutions have been bloody and violent. It is the birth pangs of a new order – ugly in its development. But so were the French Revolution, the American Civil War and other myriad conflicts fought across Europe for centuries, they say. It took years, but Tunisia passed a new constitution, held elections, peacefully transferred power and convinced an Islamist party to work within the structure of the government. But Tunisia remains an economic basket case and a target for IS and other Islamist militants. It is not a model of how the Arab Spring succeeded, but rather its best-case scenario. And it’s not a very good case.

There never was an Arab Spring. It’s a phrase the world should stop using. What happened in late 2010 and early 2011 was an Islamist Awakening. It was followed in short succession by a Muslim civil war that continues to rage today. The war is being fought on multiple fronts, including Syria, Iraq, Yemen, the Sinai Peninsula, Libya and the Tunisian-Algerian border. It is between multiple factions, including Shiite and Sunni, secular and religious, ethnic and tribal. And it is a war in which the Arabs are already – and will continue to be – used as pawns by outside powers. Tunisia was where this started. Let it be Tunisia that reminds us exactly what was started and how much further there is to go.

Daily Memo: Another Sanctions Salvo, Israel’s Government on the Brink