Two concepts increasingly dominate public discussions on the Muslim and Arab world. The first is the notion of civil war in the context of countries like Syria, Yemen and Libya. The second is the notion of conflict between Islam and the West. Both concepts fail to recognize that the Muslim world is in the throes of multiple civil wars.

Our model indicates that Turkey and Iran are the two major powers in the heart of the Muslim world, especially after the hollowing out of its Arab core. These two are the main competitors for influence in the Arab world. For the most part, the Turks and the Iranians have avoided clashing with each other. But we are always on the lookout for signs of what is an inevitable clash, and over the past few days we have noticed bellicose rhetoric emanating from Ankara directed at Tehran. 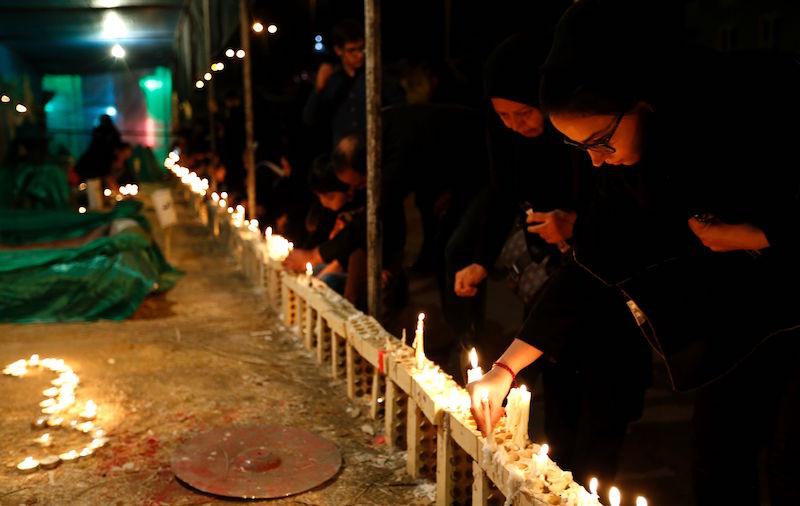 Iranians light candles to commemorate the death of Imam Hussein, the grandson of Prophet Muhammad, during an Ashura ceremony in the capital Tehran on Oct. 12, 2016. The “Shame-e-Qariban” (strangers’ dinner) ritual is held after the day procession that depicts the suffering of the third Shiite imam, whose death 14 centuries ago marked the beginning of the Sunni-Shiite split, which persists in Islam to this day. ATTA KENARE/AFP/Getty Images

On Feb. 12, Turkish President Recep Tayyip Erdoğan, while on a visit to the Arab island kingdom of Bahrain, accused Iran of seeking the disintegration of Iraq and Syria. Erdoğan identified “Persian nationalism” as a threat that needs to be blocked. As expected, Iran rejected the remarks and obliquely accused Turkey of supporting terrorist groups and violating the territorial integrity and sovereignty of Syria. On Feb. 16, pro-government Turkish daily Yeni Şafak escalated matters by accusing the Iranians of creating conditions that could lead to an “Islamic civil war.”

The “Islamic civil war” referred to here is the struggle between the Sunni and Shiite sects. Iran is the de facto leader of the latter while Turkey is trying to assume leadership of the former. Arab states need Turkey to counter Iran, but they don’t exactly want to accept Turkish domination of the Arab world. Saudi Arabia is the most powerful Arab state but a weak one, which is why it seeks a partnership of sorts with Turkey as opposed to a subordinate role.

The Shiite-Sunni conflict and the intra-Sunni struggles underscore that the Islamic civil war the Turks are warning about is already raging. In fact, the contemporary sectarian conflict has been going on for nearly four decades. However, the Shiite-Sunni struggle has been a constant since the earliest days of Islam.

It has its roots in the election of the first caliph (literally meaning successor) in the wake of the Prophet Muhammad’s death in 632. At that time, there were no Sunnis or Shiites. Those who supported the first caliph Abu Bakr eventually came to be known as the Sunnis. Those who strongly felt that Muhammad’s cousin and son-in-law Ali was deprived of a divinely ordained right to lead the Muslim nation over time became part of what is now known as Shia Islam.

The first intra-Muslim civil war took place during the reign of the third caliph, Uthman bin Affan, who was assassinated by dissidents in 656. The second civil war broke out in 680 with the Battle of Karbala, during which the troops of the caliphate dominated by the Umayyad dynasty killed Hussain, the grandson of the Prophet, and many members of his family. By the time the third civil war began, there ceased to be a single caliphate as the Baghdad-based Abbasid dynasty overthrew the Damascus-based Umayyad regime – remnants of which then established a rival caliphate in the Iberian Peninsula. With the Abbasid takeover of the caliphate, the Muslim world ceased to be a singular geopolitical unit.

In addition to competing caliphates, numerous independent emirates, imamates and sultanates arose. At one point, three large competing caliphates existed – Abbasid, Umayyad and Fatimid. Most of these were Sunni dominions competing with each other. But over time, the Shiites (which also broke into many subsects, such as the Twelvers, Ismailis, Zaydis and Alawites) were able to gain power as well. The mainstream Shiite sect (the Twelvers) reject the caliphate and insist that 12 imams from the Prophet’s lineage ought to have ruled after Muhammad’s demise.

The most notable caliphate was the Fatimid (909-1171), which at the height of its power ruled most of North Africa, the Levant and the west coast of Arabia. In Yemen, the Zaydi imamate was founded in the late 9th century and lasted all the way to the early 1960s. In Persia and Mesopotamia, the Buyid emirate was a Twelver Shiite polity that lasted from 932 to 1055. It was not until the 16th century that the current sectarian battlespace began to take shape.

It was in the first half of the 1500s that the Safavid Empire emerged as a Twelver Shiite polity in Persia and the Ottoman sultanate was firmly established in the Arab world. These two powers waged war against each other, but the Ottomans retained the upper hand because they were firmly entrenched in modern-day Iraq and Syria. With the onset of modernity, these imperial states fell victim to European colonialism. While the Europeans drew many of the modern nation-state borders, these Muslim lands had their own inherent divisions stemming from intra-Muslim divisions that lasted nearly 13 centuries.

After almost a century, the nation-states in the Arab world are now under tremendous stress because of the evolving nature of the intra-Muslim struggles that have never ceased. Some of these states have been destroyed and are unlikely to come back. The Shiite-Sunni conflict is just the most glaring example of the battle that is raging. However, it is not the most important because Sunnis account for around 80 percent of the world’s Muslim population.

Throughout history, whenever the Shiites have risen as a geopolitical power, it was the result of an internal crisis within Sunnidom. Today, this war over who speaks for Sunni Islam is perhaps much more contested than it ever has been. The majority sect is increasingly fragmenting along many different lines – geographic, ethnic, cultural, political and ideological. Islamism and its violent incarnation of jihadism are a direct consequence of the intellectual and geopolitical crisis within Islam’s majority sect.

We are used to viewing civil wars within the confines of a single country. In the case of Islam, there are many civil wars raging. The outcome of these conflicts is far more consequential as it will shape the relationship between Muslim-majority countries and the West. The conflict in Syria, especially as it relates to the Islamic State, will be a key determinant in the geopolitical makeup of the Middle East. However, it pales in comparison to the war within Islam’s body politic.