The story on the Islamic State for months has been how it is losing ground in the Middle East, but in Afghanistan, IS is expanding its operational reach. Though the Taliban are still the dominant jihadist group in the country, their nationalist jihadist agenda is losing ground to the Islamic State’s transnational jihadism. This comes at an inopportune time for the United States, which is trying to bring closure to the longest war in American history.

On Aug. 2, IS claimed responsibility for a shooting and suicide bombing at a Shiite mosque the previous day during evening prayers in the western Afghan city of Herat. The attack killed 33 people and left another 66 wounded. On Aug. 1, an IS operative blew himself up at the gate to the Iraqi Embassy in Kabul, enabling three other assailants to enter the compound. Afghan security forces engaged the attackers for several hours before finally subduing them.

For IS, Afghanistan is like all the other countries where it is active: It’s a launch pad for the transnational caliphate. Putting down roots in Afghanistan could enable IS to cross borders into Central Asia – and into countries ripe for the Islamic State’s message, like Uzbekistan, Tajikistan and Turkmenistan. 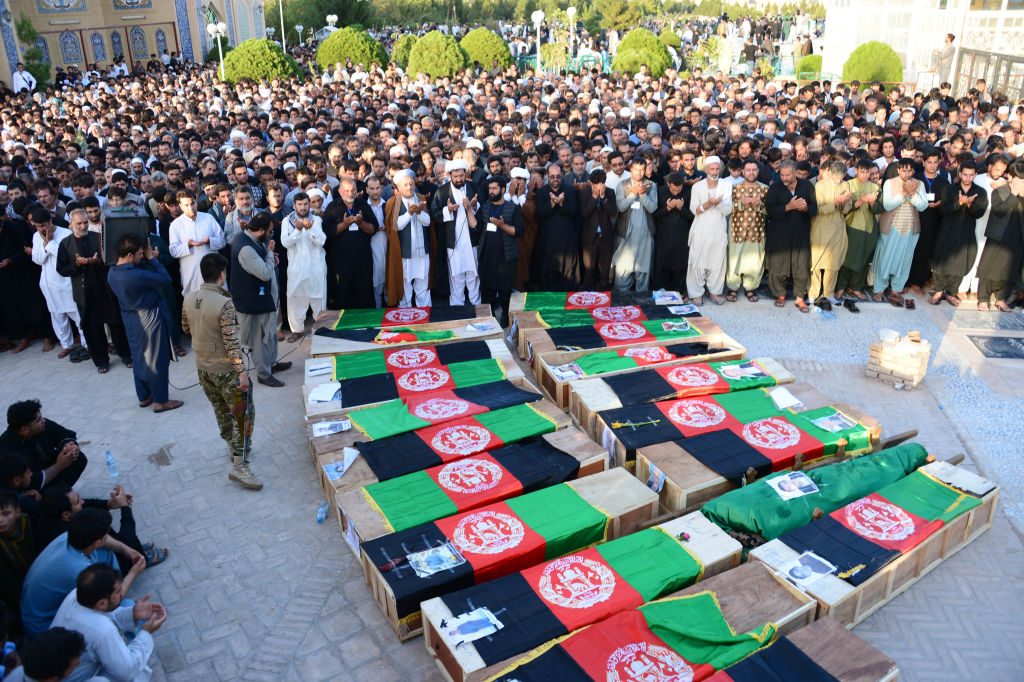 The group’s biggest obstacle in Afghanistan right now is the Taliban, but that challenge isn’t what it used to be. The Taliban have fragmented in recent years following the deaths of the movement’s founder, Mullah Mohammad Omar, and his successor, Mullah Akhtar Mansour. Moreover, the Taliban are trying to find a balance between pushing ahead with their jihadist insurgency and pursuing international recognition through negotiations.

What makes the Islamic State’s growth in Afghanistan more notable is that IS, too, has lost important leaders – two successively in the past two years. In April, the U.S. dropped the world’s largest non-nuclear bomb on an IS facility in Afghanistan, killing some three-dozen major IS officials. The Islamic State runs a radio station from its territory in eastern Afghanistan that has been targeted several times by U.S. airstrikes. But like IS itself, the station has come back each time.

Even before this month’s attacks, IS was ramping up its strikes in Afghanistan, but there’s something different about the recent target set. The Islamic State has attacked Shiite targets in Afghanistan before, but there now appears to be a sustained focus on them to exploit the sectarian fault line that runs through the region. Other countries with interests in the region are taking notice, but for different reasons.

For Iran, IS has gone from a nuisance to a real concern. For years, the group was spreading on Iran’s western border in Iraq. Then in early June, IS staged its first attack inside Iran, simultaneously assaulting the parliament building in Tehran and the mausoleum of Ayatollah Ruhollah Khomeini. The assailants came from Iran’s Kurdish minority, based in an area on that western border. Now, the Islamic State is gaining ground to Iran’s east, in Afghanistan.

The Islamic State’s attack on the mosque in Herat, only about 70 miles (110 kilometers) from Iran’s border, was intended in part to send a message to Iran that it is vulnerable from the east as well. Tehran got the message. It cannot afford to have IS on both its western and eastern borders. Iran is already susceptible to cross-border attacks on its eastern border; it’s just that those attacks come from jihadist forces based in southwestern Pakistan. Iran will probably react to the growing IS presence in western Afghanistan by increasing its support for Taliban elements that it has cultivated over the past decade.

In recent months, IS has also carried out attacks in the northern provinces of Afghanistan, closer to Central Asia and thus Russia’s sphere of influence. In response, Russia has aligned with the Taliban as a means of countering IS in Afghanistan. The Taliban’s own insurgency in northern Afghanistan has grown exponentially in recent years, but unlike IS, the Taliban’s nationalist focus means they have no interest in their fight spilling over into Central Asia; for them, the war starts and ends with Afghanistan.

The Islamic State’s progress in Afghanistan greatly complicates U.S. plans in the country. U.S. President Donald Trump and his generals reportedly do not agree on how to respond to the deteriorating situation. Retired Gen. James Mattis, the U.S. defense secretary, is leading a review of U.S. strategy in the country, but the process is taking longer than expected.

At the heart of the issue is that mainstream Afghan political factions are divided along several lines. The Taliban have been benefiting from these differences. As a result, the U.S. is stuck between a rock and a hard place. After nearly 17 years, it is obvious that staying the course is not an option. Neither is cutting its losses and withdrawing. This situation predates the rise of IS in the country.

But, ironically, the Islamic State’s emergence in Afghanistan could help the United States by giving it more potential partners in the country. Washington is already tacitly cooperating with Iran against the Islamic State in Iraq. They will probably expand this cooperation into Afghanistan. Meanwhile, the U.S. has been trying and failing to negotiate with the Taliban for many years. With IS on the rise, those frozen talks could warm up.

The growth of IS in Afghanistan means that the country is trapped between two types of jihadists: the Taliban, who want to re-establish their emirate within the boundaries of Afghanistan, and the Islamic State, which envisions a caliphate stretching from the Middle East to South Asia and beyond. It’s not hard to see whose side the U.S., Iran and Russia will come down on.