Two developments in Syria over the weekend illustrate how the competition among these enemies has benefited IS. First, Iran launched ballistic missiles at IS facilities in eastern Syria in response to the IS attacks in Tehran on June 7. Second, the United States shot down a Syrian army warplane that was attacking Kurdish-led forces fighting the Islamic State, the first time the U.S. has downed a Syrian plane since it got involved in the conflict. Russia has since announced it would no longer use the “deconfliction” communication channel that was set up to help Russian and U.S. forces avoid direct conflict in their Syrian operations. Both of these developments need to be unpacked separately.

On June 18, Tehran fired six Zolfaghar ballistic missiles at IS facilities in the eastern Syrian town of Mayadeen. This is the first time Iran has fired missiles into Syria. Iran last conducted missile strikes in 2001 in Iraq, where it targeted a rebel group known as the Mujahedeen-e-Khalq. A spokesman for the Islamic Revolutionary Guard Corps, which runs the country’s ballistic missile program, told state TV that while these missiles targeted IS they were also designed to send a message to others, namely the Saudis and the Americans.

A confrontation between Iran and the Saudis is exactly what IS wants. The Islamic State’s goal in carrying out the terrorist attacks against Iran was to trigger a conflict between the two countries. IS knows Tehran would have to respond to the attacks, and it knows Tehran believes Riyadh has links to the Islamic State. It therefore hoped that Iran might retaliate – possibly through a proxy group – against Saudi Arabia.

Of course, such an attack would be risky, so Iran chose to fire missiles at IS in Syria instead. This allowed Iran to not just retaliate but also, and more importantly, to showcase its ballistic missiles as part of its efforts to become a regional power. Considering the pressure Iran has been under from the U.S. to curb its missile program, it is unlikely that the Iranians would have struck IS in Syria if the group hadn’t attacked Tehran directly. The IS attacks gave Iran a reason to use these weapons. Even the U.S. couldn’t fault Iran for retaliating.

Still, Iran realizes that its actions will aggravate tensions with the United States. Washington doesn’t want Tehran to enhance its missile capability, which has been a source of tension especially after the signing of the nuclear agreement. Saudi Arabia and Israel have been particularly strong opponents of Iran’s missile program, and they could pressure the United States to respond to the Iranian move. This is precisely the kind of regional conflict that benefits IS.

The more the various actors are at odds with each other, the less likely they are to decisively and effectively act against the Islamic State. This kind of distraction gives IS an opportunity to grow, or at the very least survive, as its opponents fight one another. IS has withstood deadlier airstrikes, and even the losses it did sustain were deemed acceptable in pursuit of a broader strategy.

The U.S. Downs a Syrian Jet

The U.S. downing of a Syrian warplane also undermines the fight against IS. According to the United States, it shot down the plane after the jet dropped bombs on the U.S.-backed Syrian Democratic Forces. The SDF is the only ground force the U.S. can use to fight IS in Syria. But the Syrian army is also pushing toward IS territory. Since retaking Aleppo city from the rebels and clearing a substantial portion of eastern Aleppo province, the Syrian army has been in a position to retake the IS capital of Raqqa. But the SDF has also been trying to take control over the city. So even though they both oppose IS, they are also competing against each other for territory, which would explain why the Syrian regime launched air attacks on the SDF. 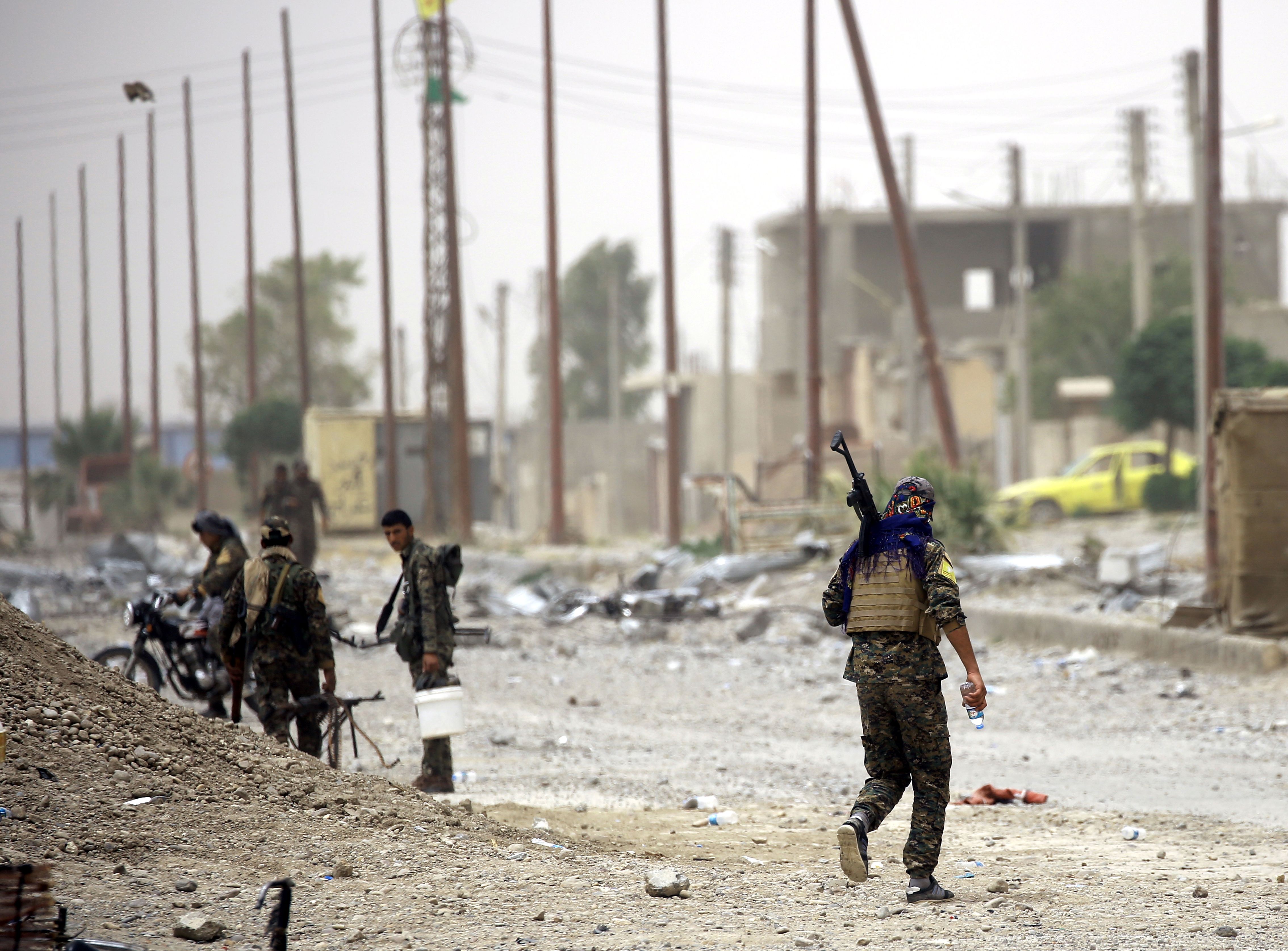 Members of the Syrian Democratic Forces, made up of an alliance of Kurdish and Arab fighters, walk in a neighborhood on the eastern front of the Islamic State’s Syrian bastion of Raqqa after seizing the area from the jihadists on June 14, 2017. DELIL SOULEIMAN/AFP/Getty Images

Unable to allow Bashar Assad’s forces to attack the SDF, the United States had to defend it. And since Russia is allied with the Syrian regime, Moscow had to respond to the U.S. action. Refusing to respond in this kind of situation would only embolden the other side. The Russians, therefore, suspended the “deconfliction” communication channel with the Americans, which increases the risk of accidents in Syria’s already congested airspace.

The Russians and Americans don’t want things to escalate; escalation is in neither party’s interest. But the Islamic State has already benefited from the distraction these events have created. The Syrian regime and its Russian and Iranian allies will continue trying to seize territory under IS control, and their efforts will continue to place them at odds with the United States and the SDF. While the United States and Russia will cooperate to some extent against IS, their disagreements on other issues slow down their progress against the Islamic State.

When it comes to Iran, the United States cannot simply accept Iran’s use of ballistic missiles; it has to respond in some way. This will create more friction in the region and will divert attention from the fight against IS. With so many actors involved in the Syrian conflict, the Islamic State is able to manipulate events in an effort to survive – a strategy that has worked well for it in the past.