It’s easy to understand why the crisis in Venezuela gets more attention than it deserves. The country is spiraling out of control, and every time it appears to reach its tipping point, it spirals further downward, defying expectations on just how far it could sink before the crisis ended.

The most recent protests concern the vote over the constituent assembly, which would have the power to change the constitution, dismiss officials and dissolve institutions. These protest won’t be what makes or breaks the country – that honor belongs to the security forces. But the political, economic and social problems that plague Venezuela won’t continue in perpetuity. Few things in geopolitics do. The Soviet Union dissolved. China ascended. The United Kingdom voted to leave the European Union.

The Venezuela crisis will pass too. A parallel government run by the political opposition is taking shape. Some countries are no longer recognizing the actions of President Nicolas Maduro. The Venezuelan economic model is unsustainable. Anti-government protests are unrelenting. Something has to give and, according to our 2017 forecast, it will be the Maduro government.

It wasn’t so long ago that Venezuela was stable, and its stability, along with ample oil reserves, made it wealthy. But even the richest country in South America is hamstrung by the fact that it is in South America, which is at best a marginal power in geopolitics.

No South American country can dominate the continent, but Venezuela is particularly ill-suited to do so. It has a population of just 31.5 million people. According to the World Bank, it has a gross domestic product of $371 billion – roughly 20 percent the size of South America’s largest economy, Brazil. Only about 25 percent of the country’s land is suitable for agriculture (the world average is roughly 36 percent). It has had to import food to sustain its population. 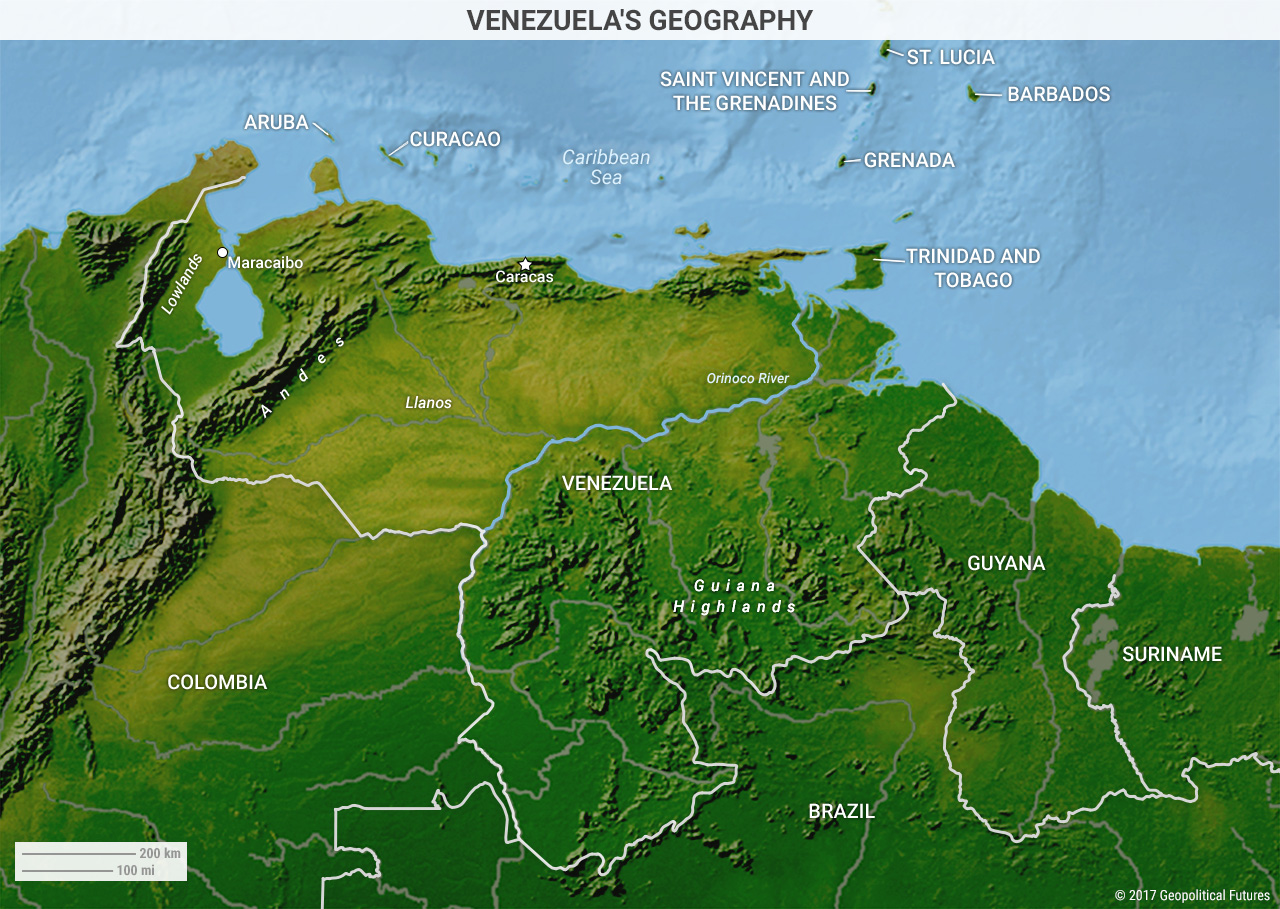 But even under improved socio-economic conditions, Venezuela would struggle to reach greater heights, so broken is it by its own geography. The country can be divided into four main regions. In the northwest, a lowlands region surrounds an inlet of the Caribbean Sea, on which sits the city of Maracaibo, the heart of the Venezuelan oil industry. East of the lowlands is the northern coast, along which the tail end of the Andes Mountains runs to nearly the westernmost reaches of the country. The capital of Caracas is in this region. Central Venezuela is a thinly populated area known as the Llanos. It consists of flat plains through which the Orinoco River flows and was used primarily for ranching before oil was discovered there. Last, the Guiana Highlands in the south is marked by dense, tropical jungles.

The country’s geography discourages mass settlement in the central and southern regions, so the vast majority of Venezuelans live along the northern coast or in valleys within its mountain ranges. It creates areas along Venezuela’s borders that are difficult to pass through (with some exceptional points along the border with Colombia). And though the combination of these barriers has prevented instability from spilling over the borders, it would also prevent Caracas from projecting power throughout the region. Assuming that Venezuela does reclaim stability, it wouldn’t change the balance of power in South America.

Nor would it change the balance of power in the Caribbean. The security of the Caribbean is a vital interest to the United States, which would be exposed to the south in the presence of a foreign power. At the turn of the 20th century, Venezuela played an important role in making sure that never happened.

This is why the U.S. sided with Venezuela in 1895 during a territorial dispute with the United Kingdom. Pursuant to the Monroe Doctrine, which discouraged foreign involvement in the Western Hemisphere, Washington funded a commission that would ultimately establish new borders and pressure the U.K. into accepting international arbitration that upheld them. This is also why the United States provided support when, in 1902, Venezuela was blockaded to force payments of debt it owed to Italy, Germany and the U.K. The United States dispatched a naval fleet to Venezuelan waters and convinced the Europeans to participate in an arbitration resolution hosted by Washington. At the time, this move was as much in Venezuela’s interests as it was in the United States’. The young, post-colonial nations all feared European attempts to regain their claims or influence over former colonies in the Americas. The U.S. could not allow a foreign power to have a foothold in a place like Venezuela. But the country is no longer as important to Caribbean security because the probability of its occupation by a foreign power is practically nonexistent and the U.S. has one of the most powerful navies in the world.

Venezuela’s major link to the global system is its oil, and even here it does not hold as much influence as it used to. Venezuela is a member of OPEC, but over the past few decades producers such as Russia and the United States have diminished the prestige OPEC membership once had. OPEC currently puts Venezuela’s proven crude oil reserves at 302.25 billion barrels. Its production levels, however, have steadily declined because of bad management, poorly maintained infrastructure, and a political and economic environment that discourages investment. In 2009, Venezuela produced 3 million barrels of oil per day. Today, production is closer to 2.1 million barrels per day. Low oil prices have compounded the problem by lowering government revenue. Better management and heavier foreign investment in technologies that could extract Venezuelan oil more efficiently are never bad things, and it’s possible that the added revenue could help stabilize the country in the long term. But more immediately, it would not appreciably affect the global oil market, which has largely already factored in Venezuelan instability for the past couple of years.

Venezuela will not be in disarray forever. But given that geopolitics is the study of how nations behave, and how their behavior shapes the global dynamics of power, the study of Venezuela is a study in tempered expectations.

Daily Memo: Threats of Retaliation in the Middle East

Ethiopia: A Regional Power in the Making?