In our 2017 forecast, we predicted that Venezuela’s government would not survive the year. Throughout 2016, the administration of President Nicolas Maduro faced political gridlock and nationwide protests that seemed to be reaching a critical point, and the problem has not subsided. For more than a month now, large-scale protests against the government have taken place across the country nearly every day. The death toll continues to rise as protests show no sign of stopping. As the crisis continues to escalate, we look at the constraints and imperatives of the different actors to determine how the situation could unfold in the months ahead.

Despite media speculation, foreign intervention either in support of the government or of the opposition is not a viable way to end this crisis. The political costs associated with any type of external intervention, including military action, a trade embargo and broad sanctions, are extremely high. Of all the countries that could intervene on behalf of the opposition, the United States is by far the most capable. But the United States’ current strategy is to let countries handle crises within their own regions rather than inserting itself in affairs extraneous to its interests. Washington has more immediate concerns to deal with – Venezuela is relatively low on its radar.

International organizations could also intervene, but they lack the capability or political will to do so. Groups such as the Union of South American Nations International, the Organization of American States and the Common Market of the South, or Mercosur, do not have organized, joint security forces, and they have limited means of influencing the behavior of their member states. But more important, Venezuela’s relationship with these groups is ambiguous: Caracas announced its intention to leave the Organization of American States and is currently suspended from Mercosur.

Mercosur could invoke the agreement its members made to uphold democracy and impose punitive measures such as ceasing trade, stopping communications, banning travel and closing borders. But the group has yet to enact these measures. Once a precedence has been set, it is difficult to undo. And those most affected by this crisis are the Venezuelan people and supporters of the opposition movement. Other Mercosur members and countries in the region do not want to impose measures that could cause harm to a civilian population that is already facing severe consequences from the upheaval. 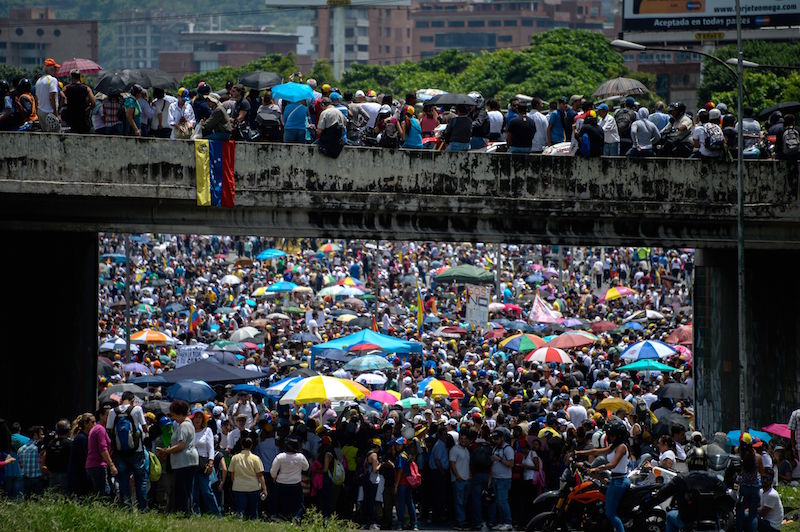 Venezuelan opposition activists carry out a protest against the government of President Nicolas Maduro, in Caracas, on May 15, 2017. Photo by FEDERICO PARRA/AFP/Getty Images

The Venezuelan government is also unlikely to find any supporters abroad who are willing to intervene. China has started to distance itself from Venezuela, reflected by the lack of new loans and by the closure of Chinese companies operating in Venezuela. Beijing will consider the Venezuelan crisis a domestic affair, so long as whoever is in government continues to sell oil to China.

Russia has provided some support to Venezuela by supplying oil to Cuba, which received large shipments of cheap Venezuelan oil until 2015. Russia’s willingness to supplement the supply helps Venezuela maintain its relationship with Cuba. But Moscow is unlikely to offer any further support to the Venezuelan government considering that Russia is already heavily involved in places like Syria and Ukraine. The situation in Venezuela is, in other words, peripheral to Russia’s national interests. Cuba has helped somewhat with security reinforcements, but Havana does not have the resources to help Maduro quell social unrest entirely.

Other Options for the Opposition

Without foreign support, the opposition will need to rely heavily on public protests to increase pressure on the Maduro government. While some opposition figures continue to seek support from other governments in the region, the call for ongoing protests suggests the opposition knows that help is not on the way. The current wave of unrest is among the largest and longest-running against the Maduro government. And with the momentum on their side, protesters won’t stop now.

The Maduro government enjoys little, if any, public support, and it doesn’t have the money to spend its way out of the problem. Maduro’s approval ratings hover around 21-26 percent, according to the most recent polls. And anecdotal evidence suggests that the actual level of support for Maduro is even lower. His support comes from a strong inner circle and a system based on political patronage. The members of his inner circle need Maduro to stay in office to maintain their livelihoods. Others get access to jobs and other benefits in exchange for their affiliation with the government. Public employees have reported that they must participate in pro-government rallies and show support for Maduro or risk losing their jobs. Now, even neighborhoods like El Valle in Caracas that strongly backed former President Hugo Chavez are turning against Maduro. His inability to continue meeting the promises made by Chavez has caused Maduro to lose this group’s support.

So far, Maduro has resisted resignation and a negotiated exit from power, believing he can withstand the protests against him. Previous negotiations failed in part because Maduro refused to concede on any of the opposition’s major demands. At this point, a change in constraints would be necessary to prompt a change in Maduro’s behavior. This would happen if Maduro feels personally threatened by the unrest. If Maduro believes that his security forces can no longer protect him or that his personal safety is in jeopardy, he will be forced to rethink his stance on leaving office.

The Role of the Military

If the military and other security forces can no longer keep the protests in check, it will be a game changer for the Maduro government. So far, we have seen security forces retreat to more defensive positions (that they can hold), but no major casualties among these forces have been reported. This means they have managed to maintain territorial control, though they cannot prevent the protests from being organized in the first place. The military could lose its ability to keep the protests under control if demonstrations grow larger, if protesters become more coordinated or armed, or if security forces fail to enforce security measures.

The military currently supports the government and will not try to overthrow it. There are multiple factions within the military, but the division between top-tier and lower-tier officers is the most concerning for Maduro. The higher ranking members often benefit from government business, kickbacks and illicit activities like the drug trade. They don’t want to see Maduro fall because their prosperity is linked with Maduro’s. They also don’t want to govern, and therefore will not overthrow him.

The lower-level officers, on the other hand, do not get additional financial payoffs from being part of the military. The relationship to watch moving forward is the interplay between the opposition movement and lower-level officers of the security forces. Earlier this year, the opposition courted these officers, encouraging them to support the people over the government, but failed to win them over. Since then, there have been unconfirmed reports that the government has detained lower-ranking officers. Aligning with the opposition could appear more attractive, however, if the government were unable to pay these officers’ salaries or if extreme violence were used against civilians. If security forces align with the protesters, Maduro’s safety could no longer be guaranteed.

The security situation in Venezuela will deteriorate even further before there is a break in the government. Once this break occurs, some type of election will be held to legitimize the new government. But whoever ends up in power will still face an economic crisis and will still have to rebuild the country. These problems necessarily require time to solve.